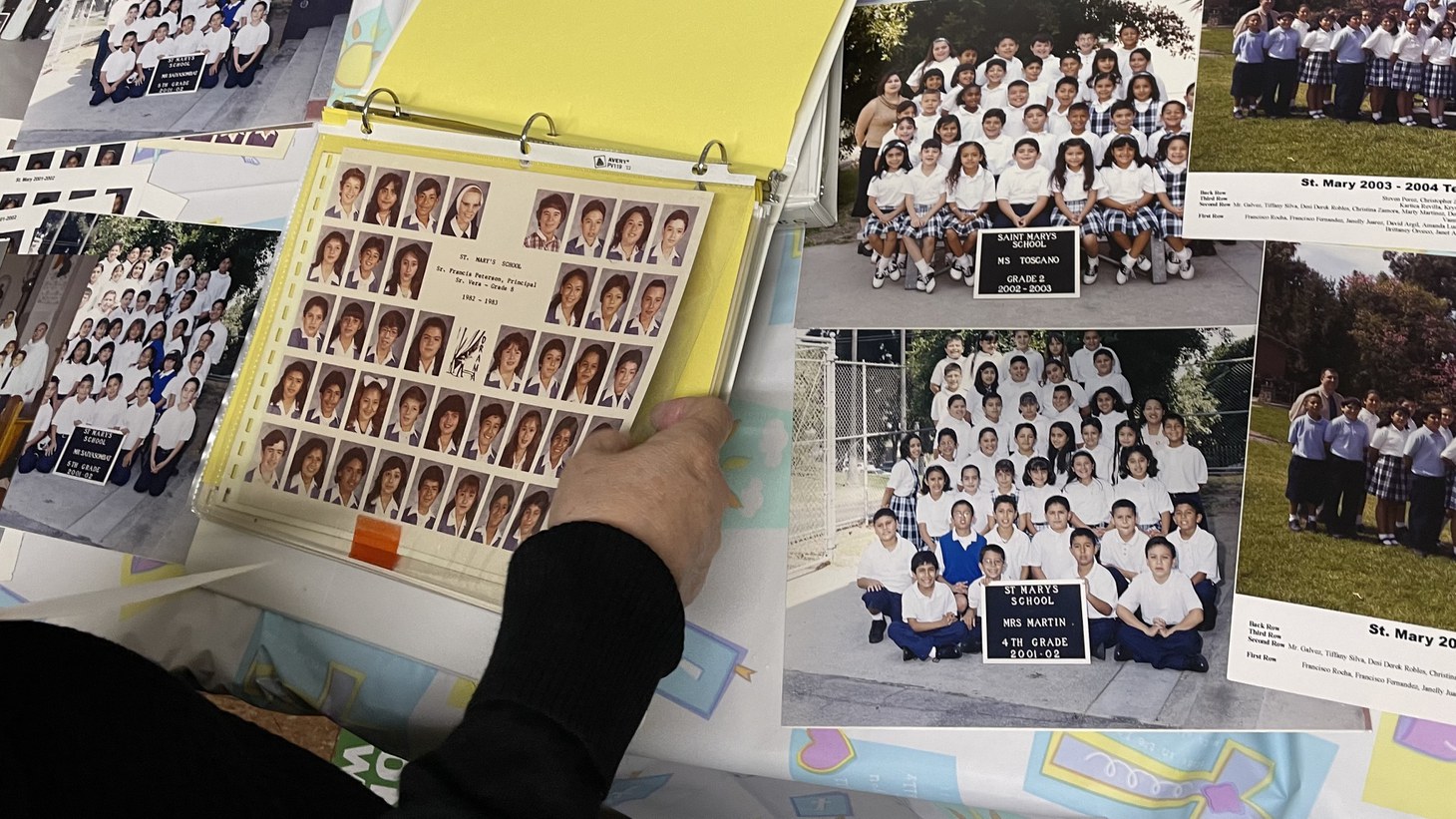 A woman at a recent celebration of St. Mary Catholic School pores over class photographs, looking for a familiar face. The school closed in June after 115 years. Photo by Robin Estrin.

Almost all of Charles Martinez’s life has revolved around St. Mary Catholic School, near the corner of East 4th Street and St. Louis. Martinez, 70, attended the elementary school in the 1960s. In 1986, he returned to teach physical education. Around campus, he’s affectionately known as “Coach.”

“The school has been – how shall I say – the cornerstone of my education,” says Martinez.

That’s true for thousands of students who have passed through the school’s doors since they opened 115 years ago. Martinez says that in his youth, St. Mary’s and other Catholic schools in Boyle Heights represented a warm welcome and a pathway to the middle class for recent immigrants, particularly those from Mexico and Latin America.

“We're very tied to our religion,” says Martinez, whose family is from Mexico. “So the fact that they can get in here, into a Catholic school, is the first thing they want for their kids.”

But that pathway may be in peril. Almost half of the Catholic schools open a generation ago have since closed. According to the National Catholic Educational Association, the system has lost, on average, 1-2% of its students each year since the 1970s. Fewer than 6,000 remain in the U.S. today.

Last week, after more than a century, St. Mary’s closed its doors for good. 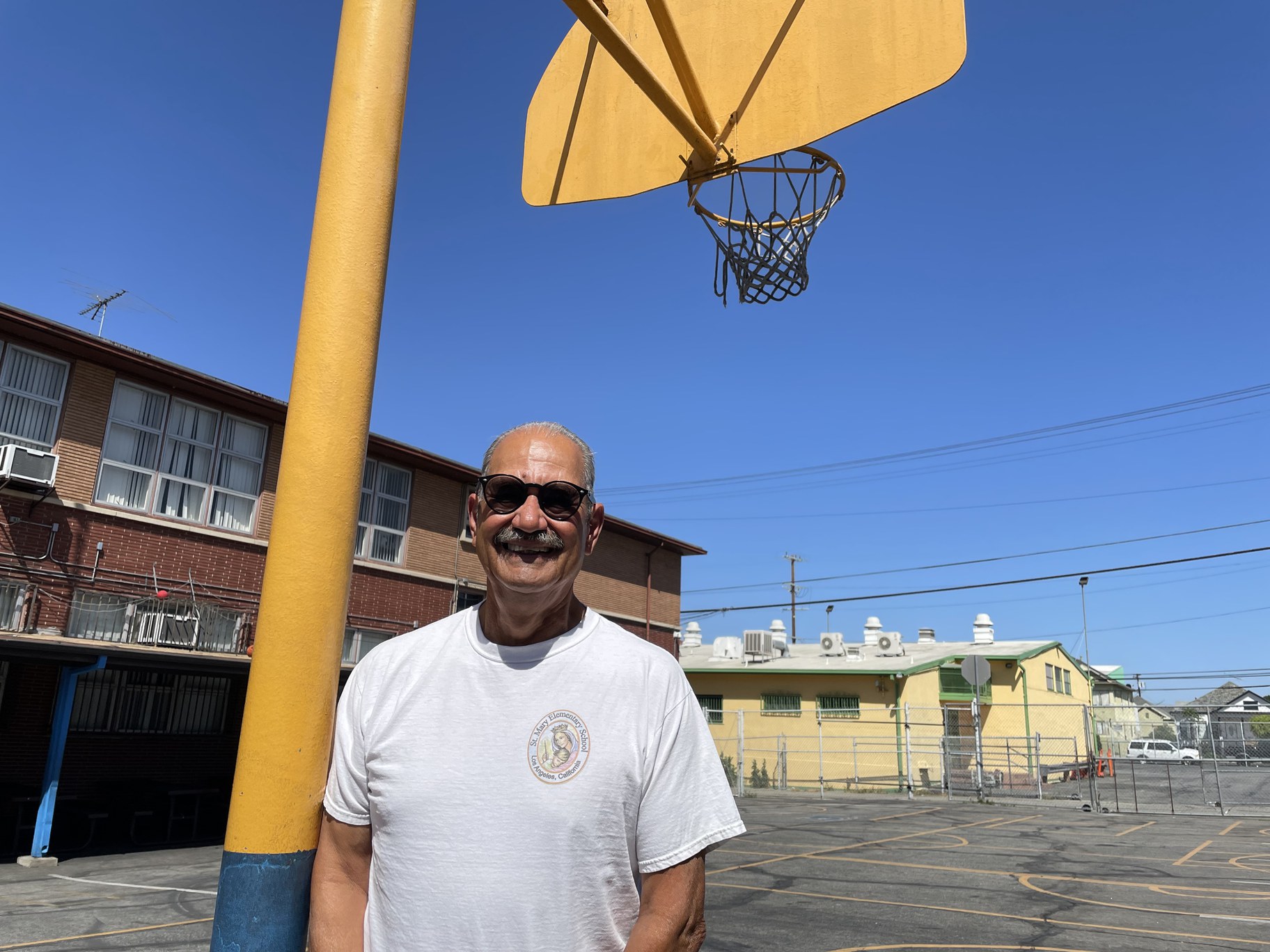 Charles “Coach” Martinez, photographed on the school’s basketball court, attended St. Mary’s in the 1960s, and returned as a teacher in 1987. Photo by Robin Estrin.

“We have more brick and mortar buildings and more seats in those schools than we have children to fill them,” says Paul Escala, superintendent of schools for the Los Angeles Archdiocese, noting that St. Mary’s students will be absorbed into nearby Catholic schools, increasing the amount of resources available to the students at those sites.

Martinez remembers when St. Mary’s classrooms were packed with students back in the 1960s, when Catholic school enrollment nationwide was at its peak.

He noticed enrollment at St. Mary’s drop in the 1990s, at first a gradual decline. LA’s birth rate is declining, and as the pool of students in Boyle Heights is shrinking.

But more recently, there’s far more competition for students than there used to be.

“There are 32 elementary schools within one and a half miles of St. Mary's,” Escala points out, noting the large number of new charter schools in the area. Escala says enrollment at St. Mary’s has dropped 38% in the past five years.

Many charter schools try to do what Catholic schools have always done: launch low-income children into the middle class. And they do it without charging tuition.

Escala worries about the future of Catholic education. For generations, he says, parochial schools have been banners of welcome to new immigrants – including members of his own family, who emigrated from Mexico at the turn of the last century.

But parents like Lizeth Espinoza, whose son attends Extera, a charter school down the street from St. Mary’s, don’t see the point in paying tuition to avoid a local public school when charters offer an alternative.

“It's too much, too, too much,” Espinoza says of the costs of a Catholic education. “And they say, ‘Oh, you can work here and pay part of the tuition.’ But I think that education is, it have to be free.”

Another factor contributing to the decline of enrollment in Catholic schools is the history of sexual abuse by clergy.

“Let's face it, the Catholic Church is having to pay for their sins now by closing this school and many other Catholic schools in the neighborhood,” says St. Mary’s alum Stella Robles-Murga.

St. Mary’s might have hung on longer, but the onset of the pandemic dealt it a final blow.

“People were losing their jobs,” Martinez says. Many could no longer afford tuition.

St. Mary’s costs parents more than $300 per month, and many families receive financial aid. That’s way less than other private schools in LA but still unaffordable for many families.

“I feel so bad for some of the parents that would say, ‘I can't do it. We're gonna have to take them out and put them in public school, or homeschool,’ says St. Mary’s parent and alum Alicia Navarro. 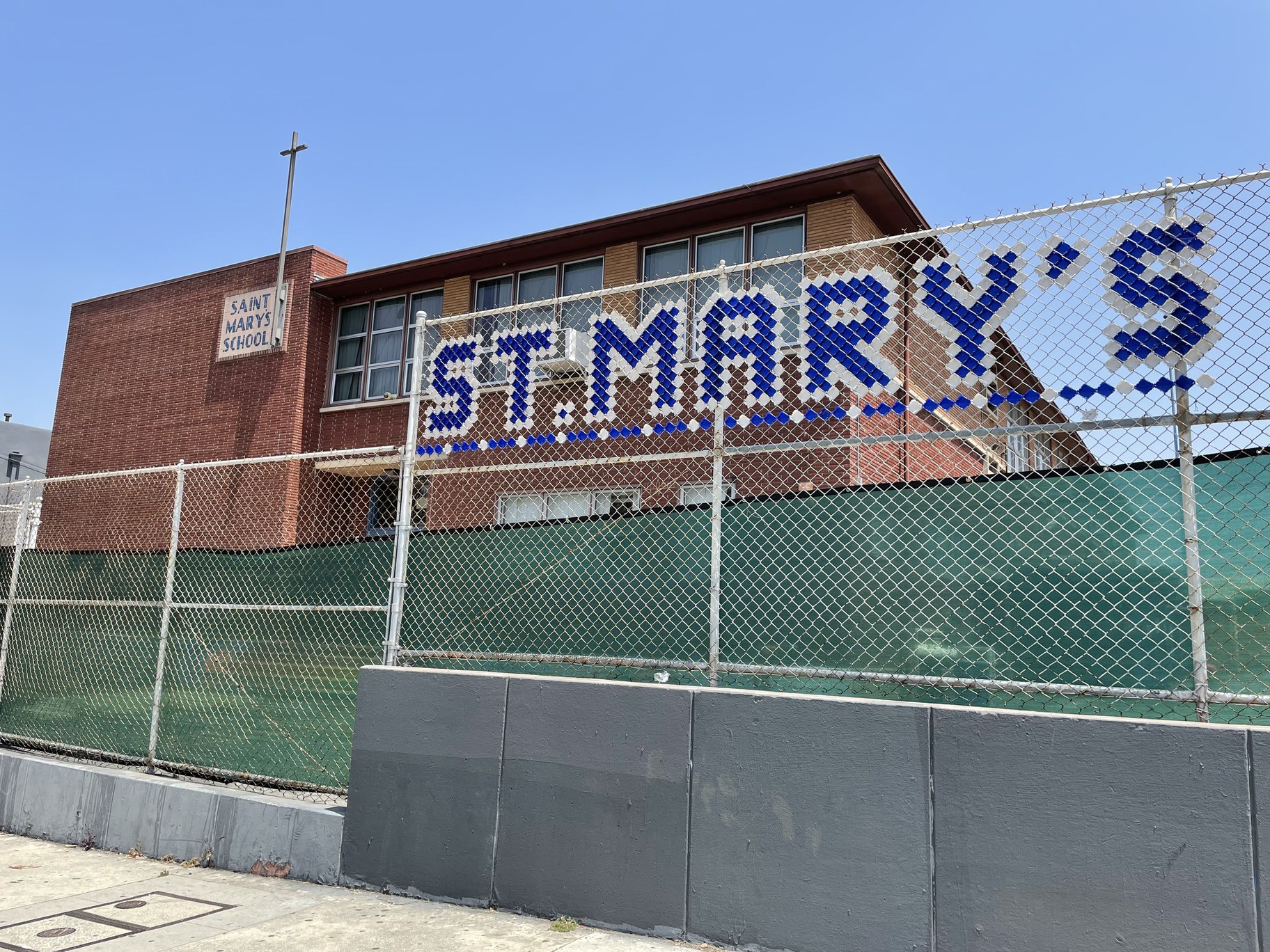 Catholic schools are funded in large part by tuition payments and contributions from local parishes. Fewer students in the school has meant that those who have stayed at St. Mary’s were getting starved for resources.

Martinez himself hasn’t been paid for his work, which he calls “service,” in five years.

Finally in April of this year, St. Mary’s vice principal, Sister Ann Cassidy, delivered the bad news Martinez had tried to pray away. 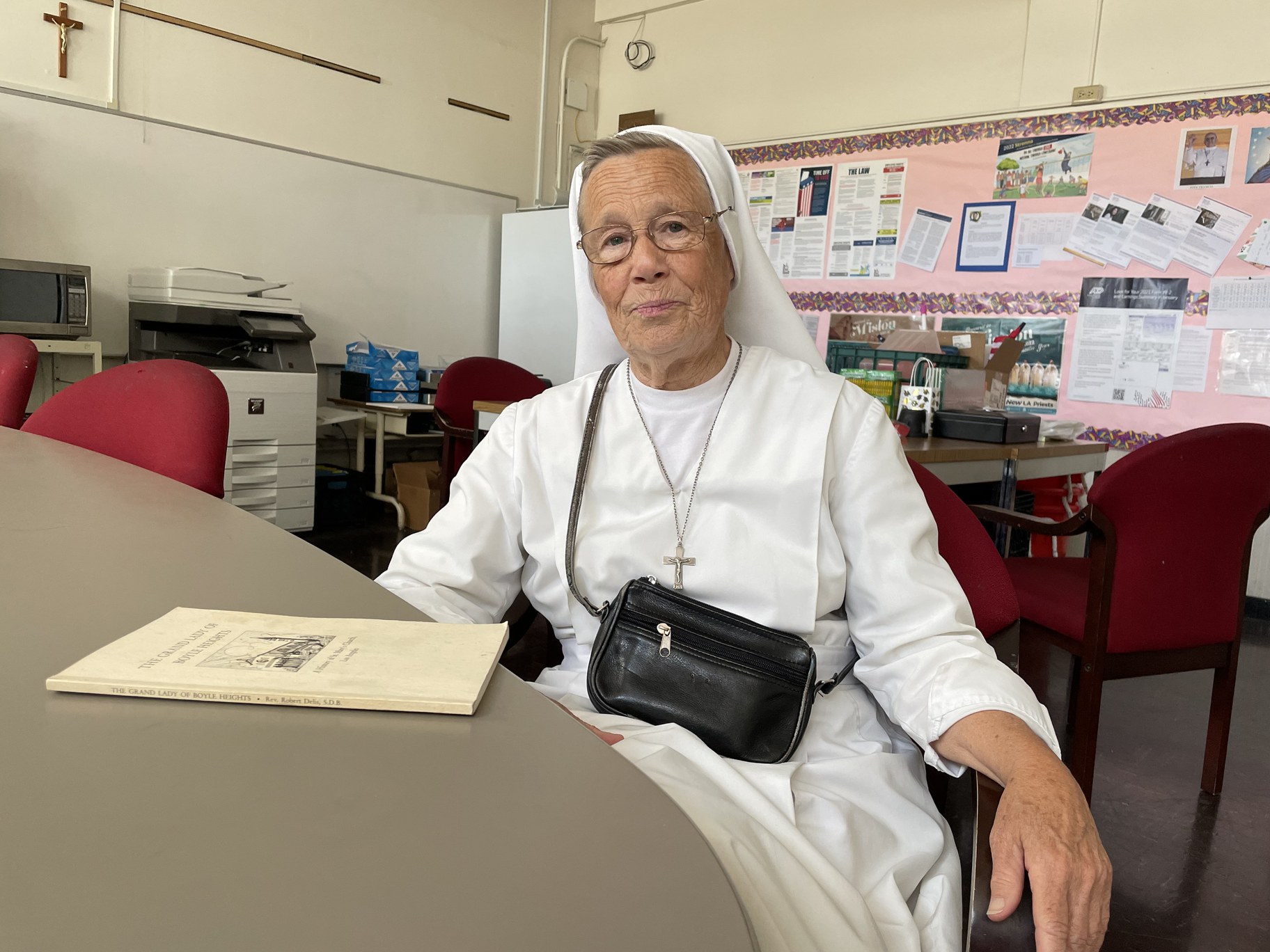 “Sister Ann came over and she put her arm around me, and she told me she was going to spare me the pain of having to hear [about the school closure] from the Archdiocese. And so I just got up and went home,” Martinez says. “It’s the kids I’ll miss,” he added. “They gave me purpose.” 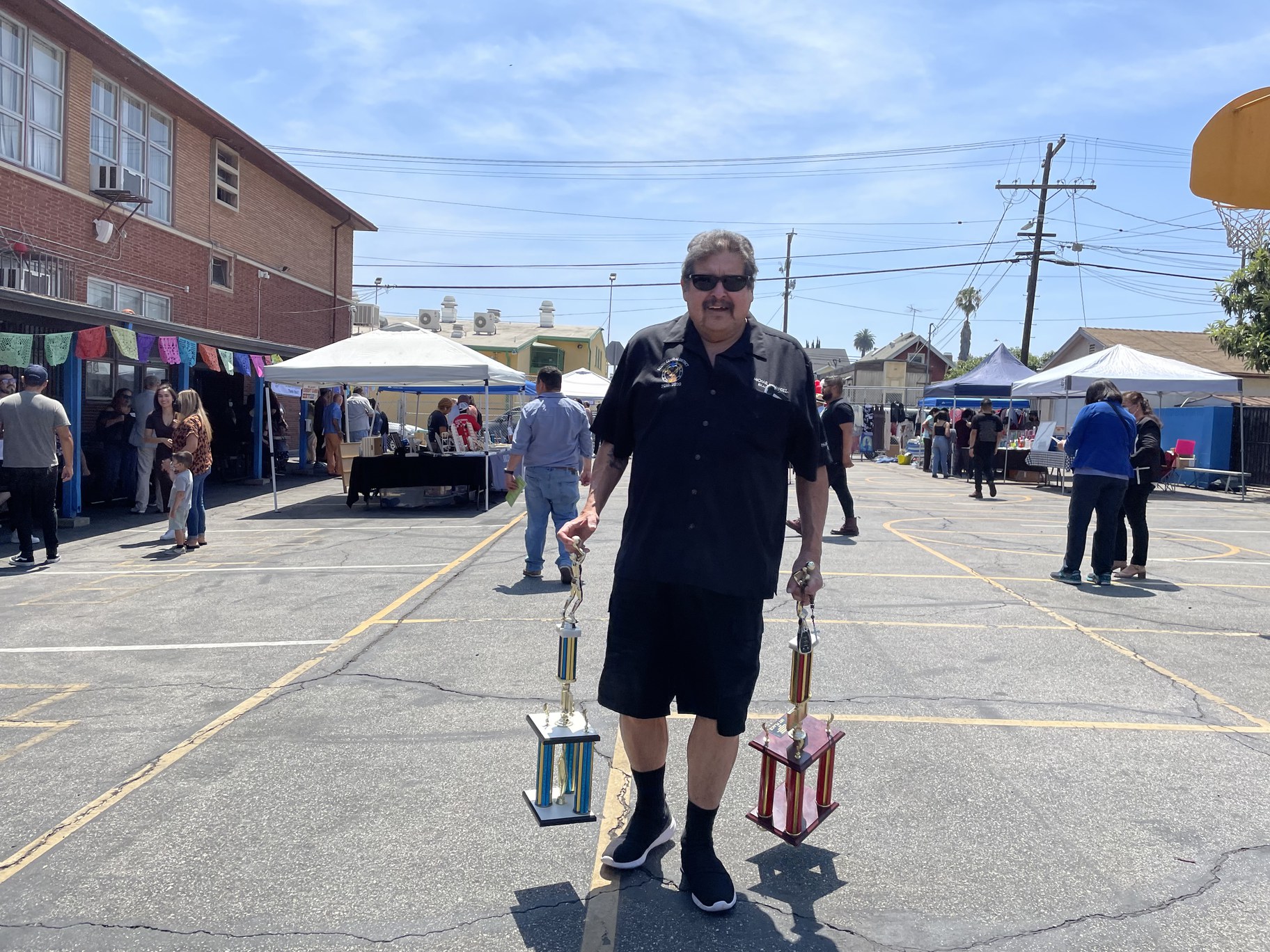 Mike Fernandez clutches trophies of two basketball teams he led as a St. Mary’s sports coach. Attendees at a recent celebration were invited to take school memorabilia home ahead of the school’s closure. Photo by Robin Estrin.

On a recent Sunday, alumni – many with children and grandchildren – flooded the hallways of St. Mary’s, sifting through class photos and old basketball trophies, looking for familiar faces and recalling former glory.

Sitting at a desk in her sixth grade classroom, Emily Carter said she was shocked her old school was closing. She graduated a year ago, and her brother just finished the first grade here.

“My idea was that the school is going to be here forever,” she said.

“He grabbed my purse and dumped it all over the school yard,” she said. “That was kind of my introduction to my future husband.”

After they say goodbye to St. Mary’s School, the couple had a date. They headed out for lunch at Al and Bea’s, their old haunt on 1st Street, just like they did when they were kids.