Jule Hus is the place to go for one more ornament for your Christmas tree. Nestled in the quaint town of Solvang, it’s filled with music boxes, advent calendars, and that last shepherd you’ve been missing for your nativity scene.

“Jule Hus is Danish for Christmas House. The attempt is to recreate a European Christmas with the old world flavor,” says the owner, David Watts. His family has owned the shop for 53 years. 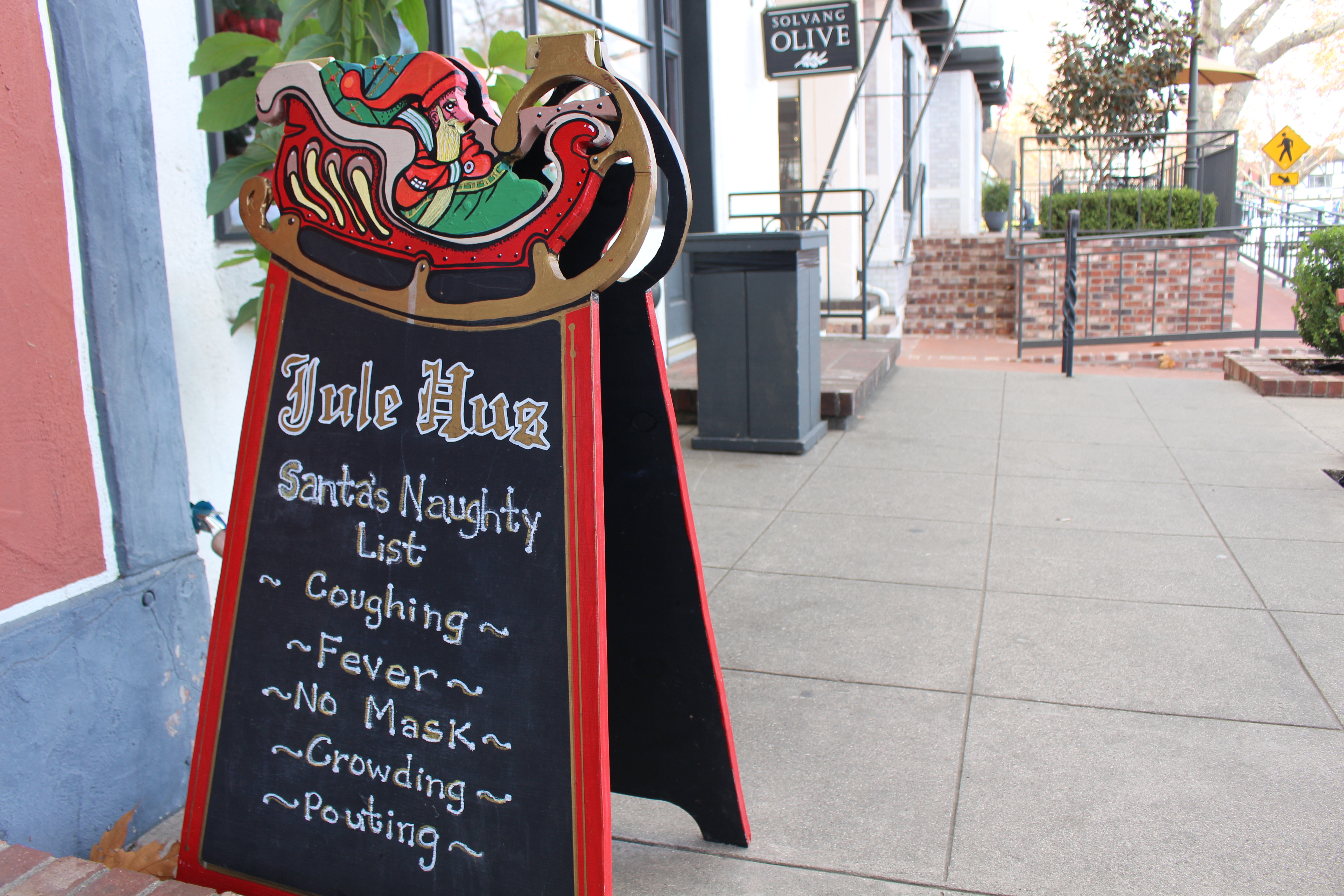 Shops get creative with their public health messaging. Photo by Kathryn Barnes/KCRW.

Although you’re in Santa Barbara County, visiting Solvang feels like stepping into a dream.

“It kind of appears out of the California fog. In the midst of a Spanish California, you've got a Danish 17th century provincial town,” says Watts. 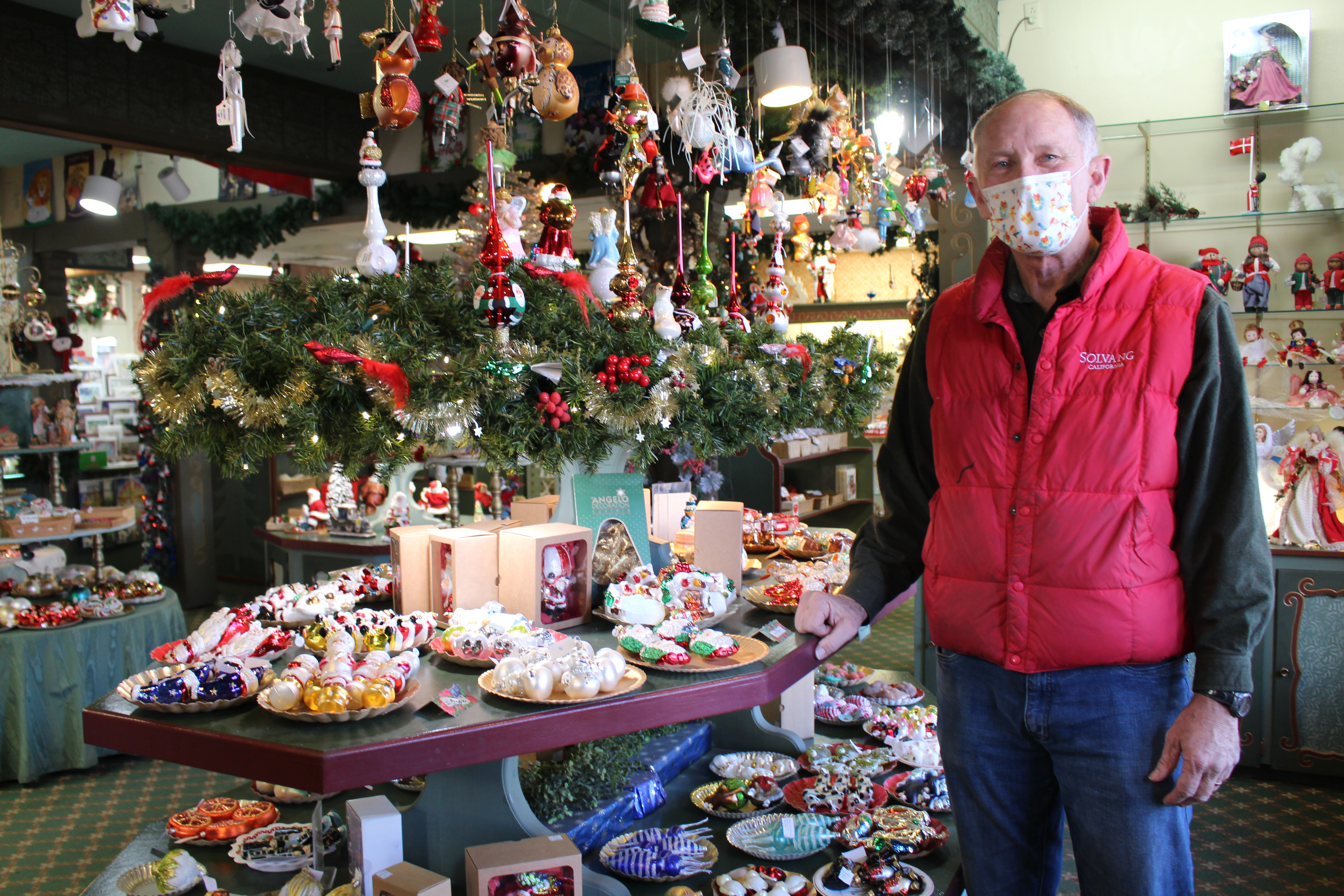 The Danish tourist town is typically busy year-round, but Christmas is when it pulls out all the stops. Even this year, when so many traditions and celebrations had to get canceled due to the pandemic, business owners in Solvang are doing whatever they can to safely share the holiday spirit with locals and any tourists willing to defy state public health orders on staying home.

A hundred lit-up trees line the sidewalks of the downtown, where you’ll find a danish bakery or chocolate shop on virtually every block. There's a Hans Christian Andersen Museum, a clog store, even a boutique specializing in cuckoo clocks. 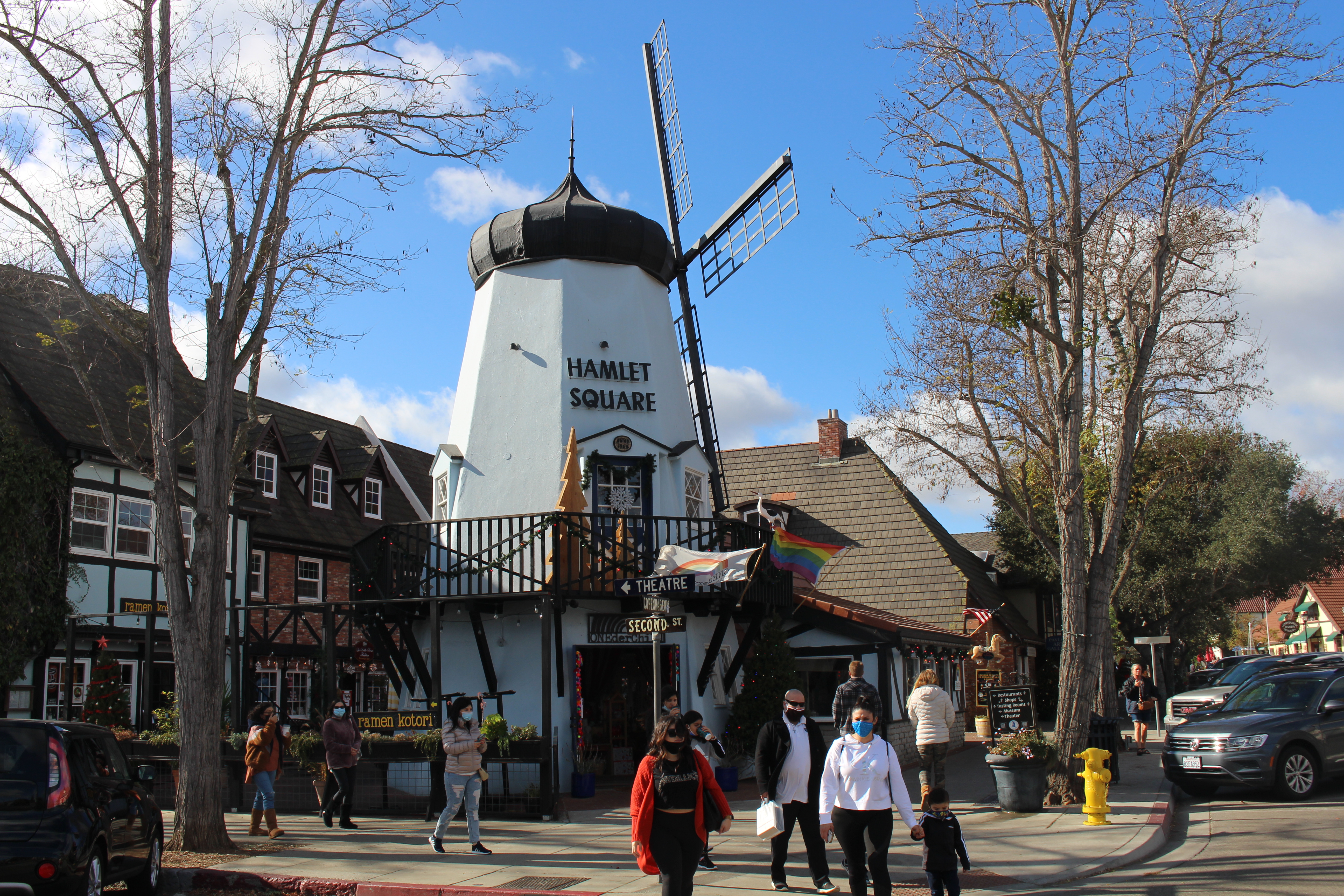 Tourism is down in Solvang, but handfuls of families have decided to ignore the state’s stay-at-home order. Photo by Kathryn Barnes/KCRW. 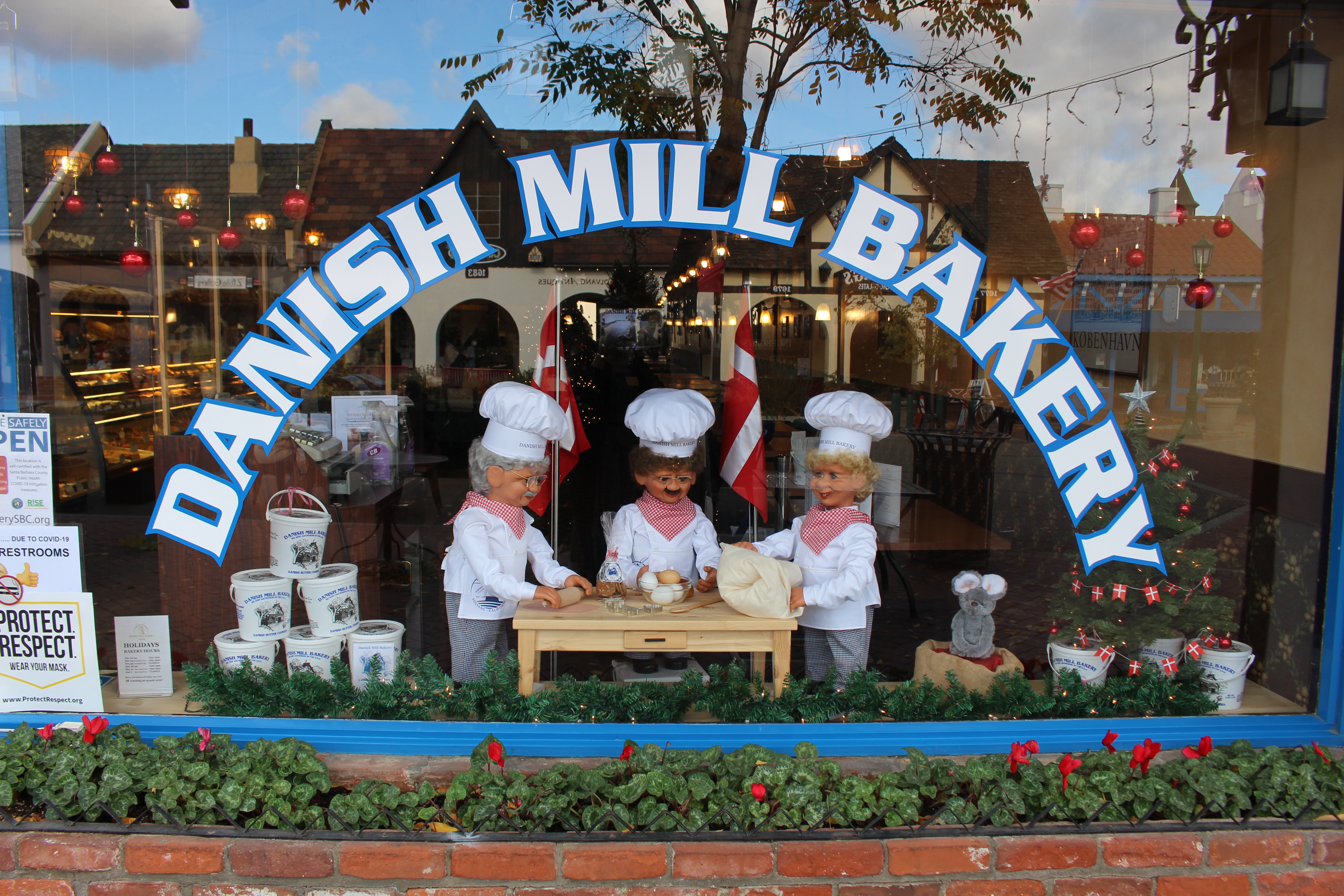 One of several Danish bakeries in Solvang. Photo by Kathryn Barnes/KCRW. 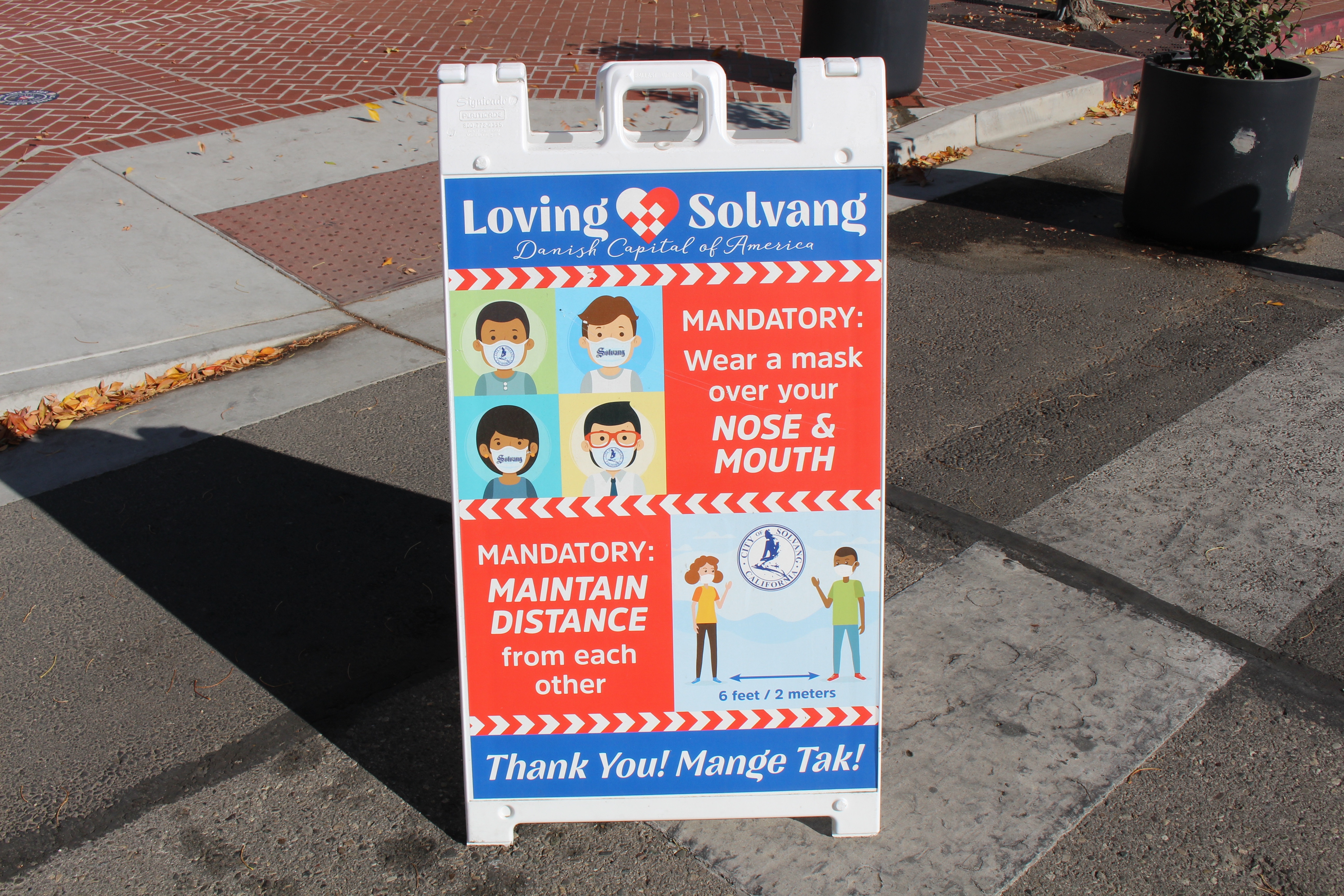 Public health messages line the streets and store windows of Solvang, reminding people to wear their masks and stay six feet apart from others. Photo by Kathryn Barnes/KCRW.

But in each store, only a few people are wandering around. Business owners say foot traffic is down to about a fifth of what it typically is in December, due largely to the stay-at-home order announced earlier this month by the state, spurred by the surge in COVID-19 cases, hospitalizations, and deaths.

For a few days earlier this month, Solvang made national headlines when the outgoing mayor and City Council voted to defy the state’s restrictions and allow restaurants to reopen for dining. But that got nixed a week later, as county enforcement showed up and the new mayor quickly reversed the declaration.

So like the rest of Southern California, restaurants are offering take-out only. Stores are open to masked customers at limited capacity. Hotels and inns are open to essential workers only, though judging by the tourists here, that rule may be getting bent.

“There are some that are coming in [to Solvang] and want to and planned it,” says Kim Jensen, who owns a Danish chocolate shop called Ingeborg's. “And then others say that they were supposed to go somewhere else. You know, they couldn't go to Europe. So they said, ‘Hey, let's just get away for two and a half hours.’” 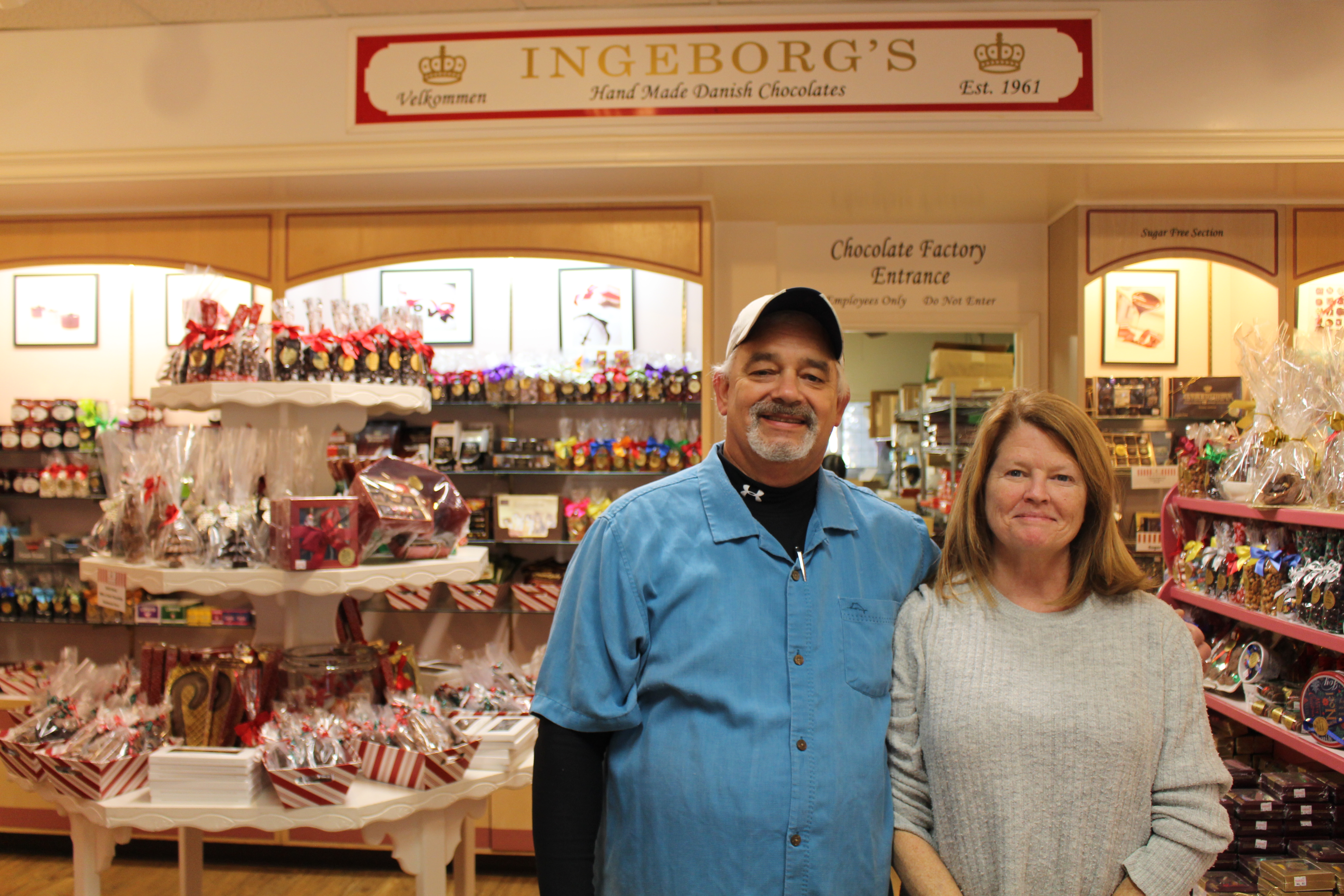 Kim Jensen and his wife own Ingeborg’s, a Danish chocolate shop. Though foot traffic is down, they were highlighted in a recent Lifetime holiday moving, which has been driving phone and online orders. Photo by Kathryn Barnes/KCRW.

He says Solvang is typically on the tour bus circuit for international travelers, but this year visitors tend to come from California or other nearby states.

Christine Rene drove up from Thousand Oaks with her husband after hearing on the news that Solvang was open for business. “This place feels like Christmas,” she says. “It's important to feel that in our hearts, particularly this year. It's so cute. There's Christmas trees everywhere, with the best danishes you can get anywhere. It's just heartwarming.”

She says most of the local shops in their hometown are closed. Standing on the side of the road, munching on a pastry, she says a few hours in Solvang has improved her mental health.

“I needed to come out and socialize and see people's faces and go into stores,” she says. “I feel better. I feel lighter now. I really needed to do it. I'm glad we did it.” 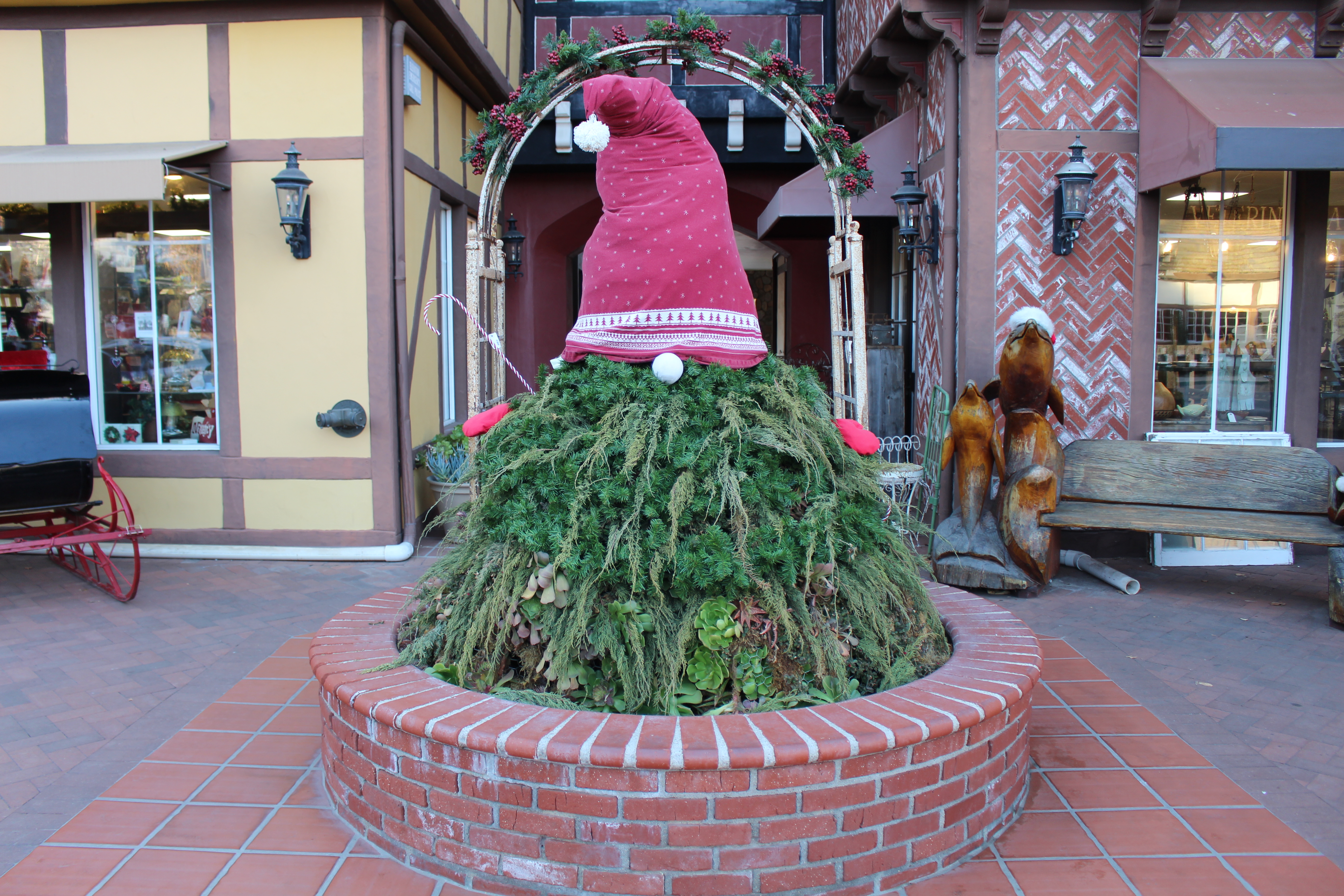 Business owners get creative with their decorations. Photo by Kathryn Barnes/KCRW. 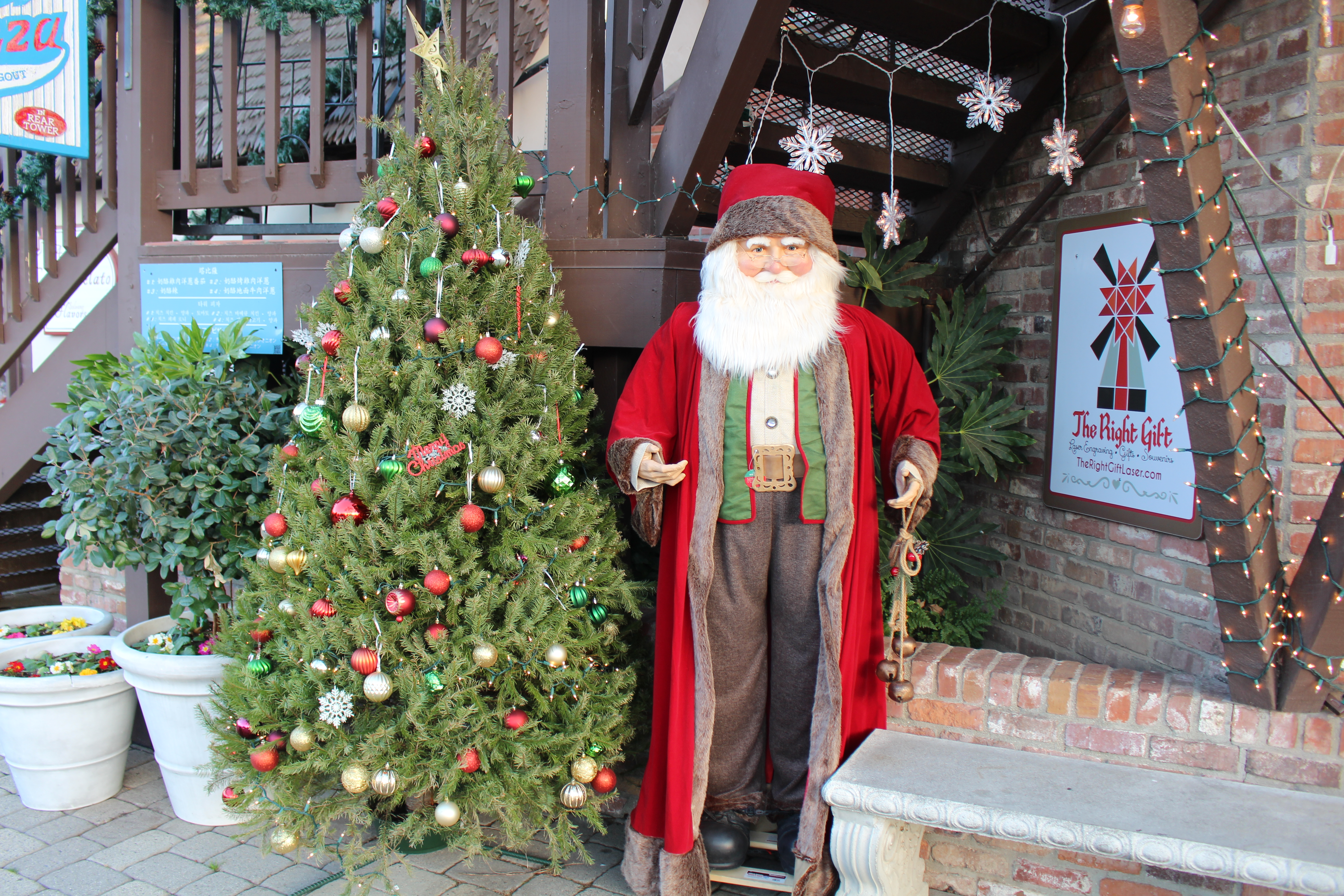 Solvang is dripping with Christmas decorations, both inside and outside of shops. Photo by Kathryn Barnes/KCRW.

Like the number of visitors, the number of festivities around town have also been slashed. A visit to Solvang in past Decembers typically included horse carriage rides, a parade, dancing ballerinas, carolers, Santa Claus in the park, and the annual Christmas tree lighting countdown.

This year, all of that is canceled.

But stroll down the streets as the sun goes down, the night gets chilly and the lights turn on, and you’ll see no shortage of Christmas spirit. From the trees in the park to the windmill by the post office, everything is adorned with bright lights. 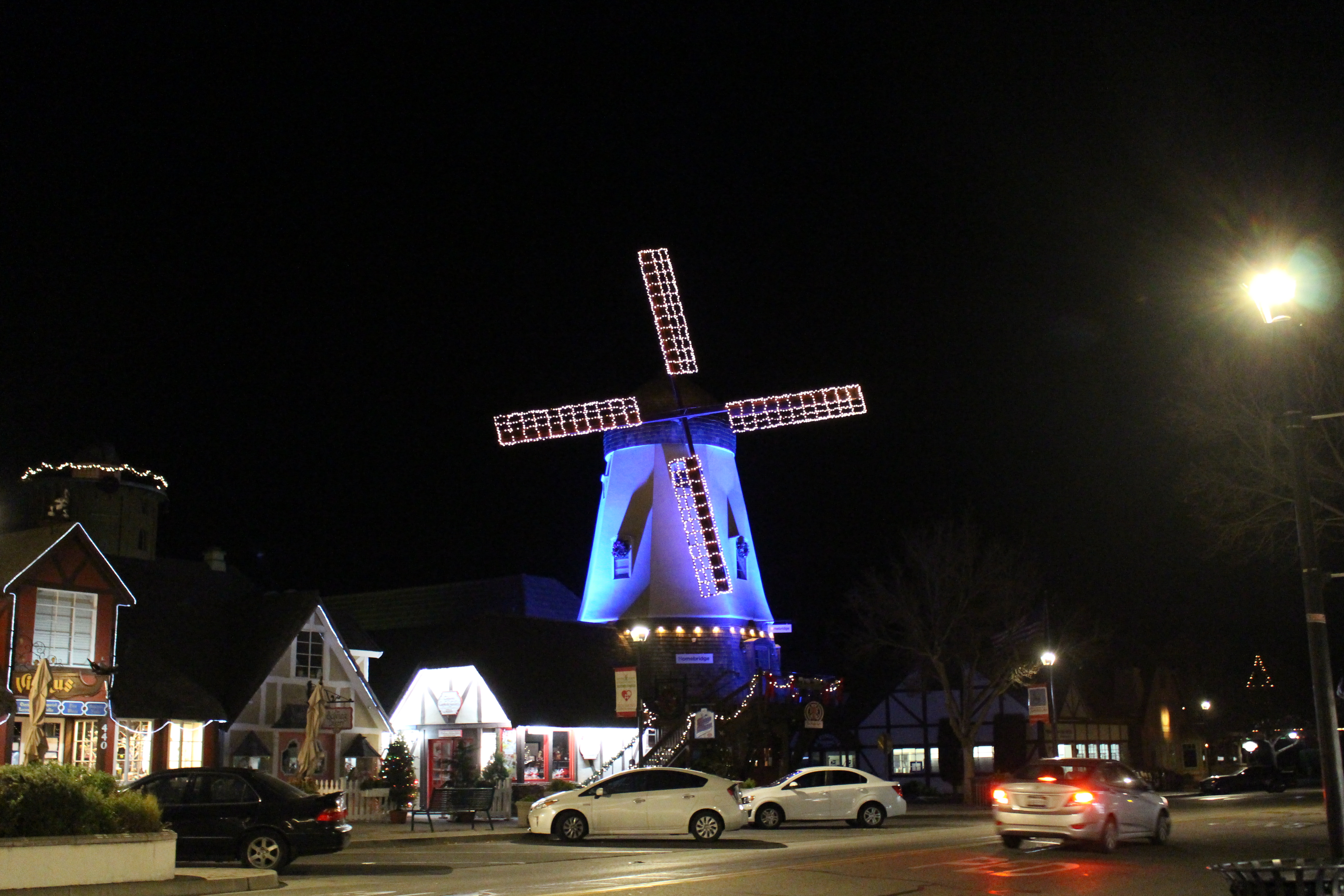 This year, even the windmill next to the post office was lit up for the holiday season. Photo by Kathryn Barnes/KCRW.

Kids are okay and more resilient than adults: LA teachers on another semester of remote learning

How to volunteer, in person or virtually, this holiday season in LA

During this pandemic, many Angelenos are facing unemployment and food insecurity, and dealing with mental health issues. All of this might be more acute during the holidays.