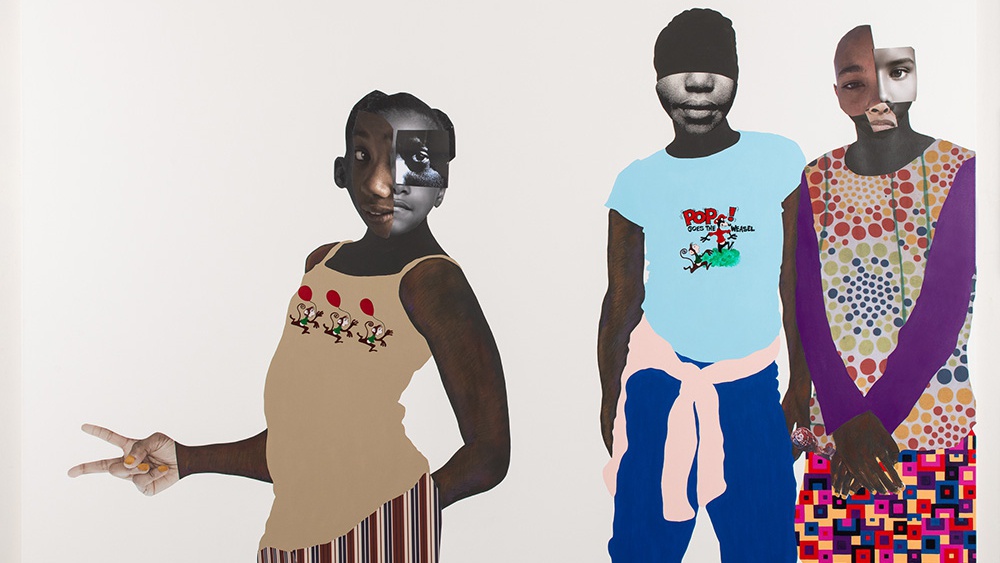 A blank white canvas provides the backdrop for much of artist Deborah Roberts’ work. That white space contrasts with the bodies and faces of Black youth.

“The work is really about how we perceive Black children. … We often adultify Black girls and boys,” says Lindsay Preston Zappas, founder and editor-in-chief of Contemporary Art Review Los Angeles. “It’s a really deliberate strategy she uses to get at these much larger issues of systemic racism in our country.”

In her collages, Roberts reassembles the bodies and faces from other photos and paintings from the internet.

“Some of the pieces, the kids are literally just standing there … as if they have been playing, and we interrupted them as a viewer, and they’re looking up at us.”

Roberts references instances when Black kids interact with police, and how those situations often end in violence. In one of her works, “Cock-a-doodle-do,” a boy is trying to appear tough by flexing his arms, but lacks any muscle. Roberts has said she took her inspiration from 12-year-old Tamir Rice, who was killed by Cleveland police.

In addition to her figurative work, Roberts also explores how Black female names can be questioned. In one piece, a red squiggle — similar to a Microsoft Word spell check prompt — underlines the name of a Black woman who has gone missing.

“She’s really speaking to the ways our systems are biased, even down to the technology we use, even to this kind of daily messaging we’re receiving,” says Preston Zappas.

The exhibition runs through August 20. You can see most of it at Art + Practice in Leimert Park. One of Deborah Roberts’ murals is at the California African-American Museum near Exposition Park.