Physically apart but supporting each other: Life inside a co-living apartment during COVID-19 The rooftop at Treehouse, a co-living apartment building in Hollywood, features a cafeteria and is designed for group meals and socializing. Photo credit: Tedi Dorman.

Treehouse is a 60-bed co-living apartment building in Hollywood, specifically designed around in-person interaction. But now, Californians are being asked to isolate from each other. Residents must now figure out how to stay home and stay six feet apart.

Residents typically get private rooms in suites. These suites can hold up to five people and have a shared kitchen and living room. Outside of these suites, there are lots of shared common areas. The building has a coffee shop, library, rooftop cafeteria, sundeck, art studio, and a basement living room the size of a neighborhood bar. 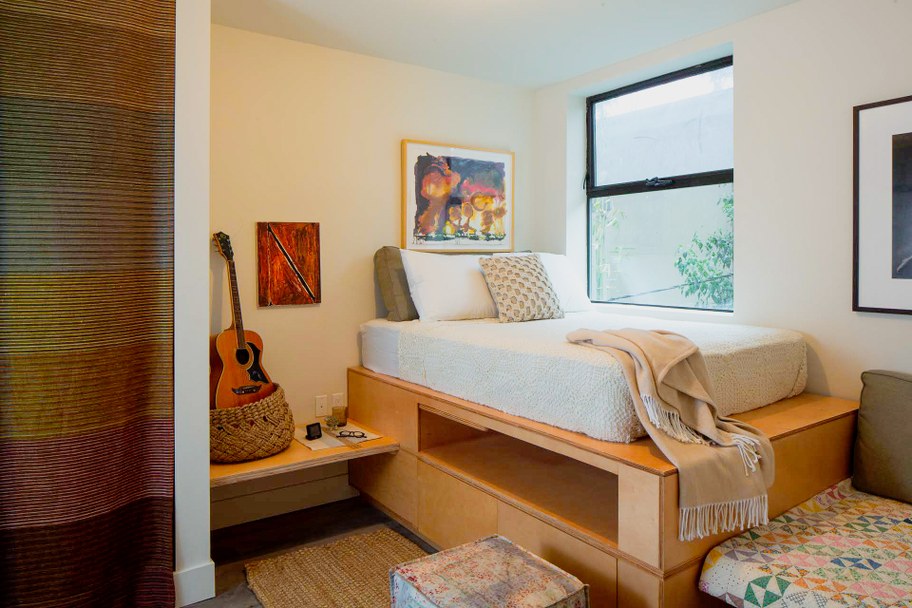 One of the private bedrooms in Treehouse’s suites. Photo credit: Art Gray. 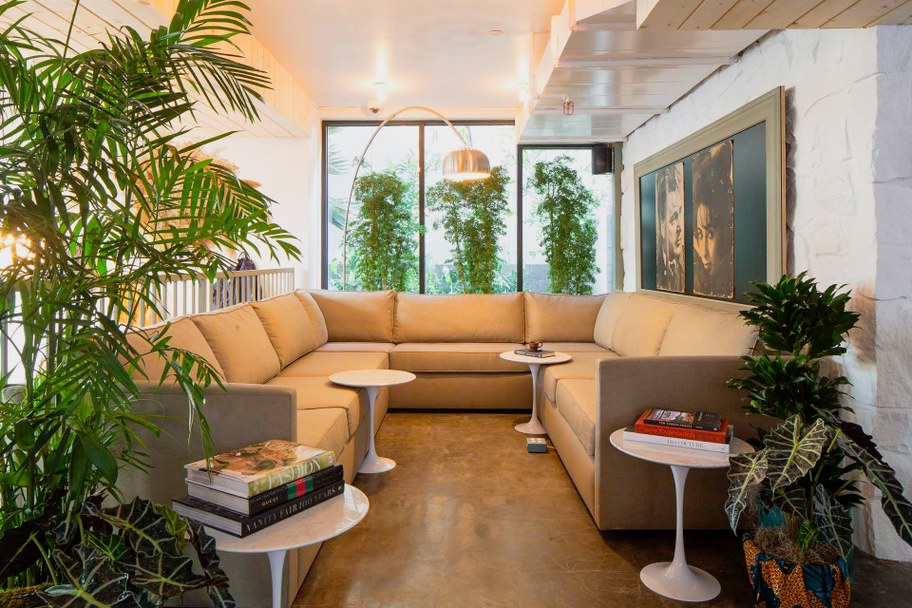 Instead of the standard mailroom, Treehouse founders turned the entrance into a coffee shop with seated areas like this one. Photo credit: Art Gray. 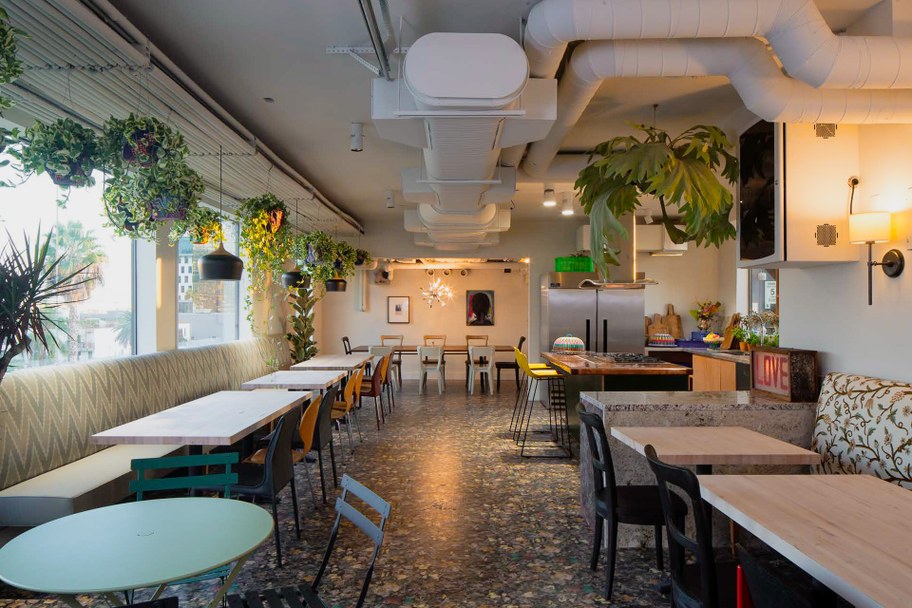 Co-living is appealing to renters like Jade Brandais, who want both affordability and community. She works at Treehouse’s coffee shop and loves chatting with residents as they stream in and out all day. 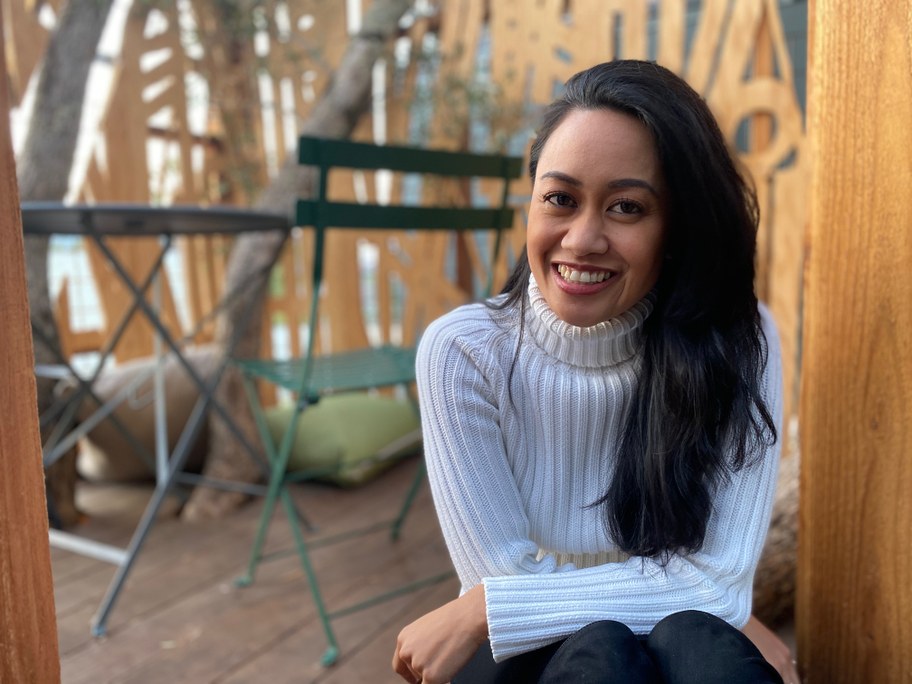 “It's a different take on neighbor. We're not just asking for someone to water your plants. I mean, we've really become more than just a community. We've become a family,” says Jade Brandais of her experience living at Treehouse. Photo Credit: Adriana Cargill.

At the Treehouse coffee shop, couches are less than six feet apart in some areas and face each other to promote socializing.

There’s a giant outdoor stairwell that every suite and common space opens onto. This stairwell is designed to create planned and unplanned interactions as residents move around in the building. 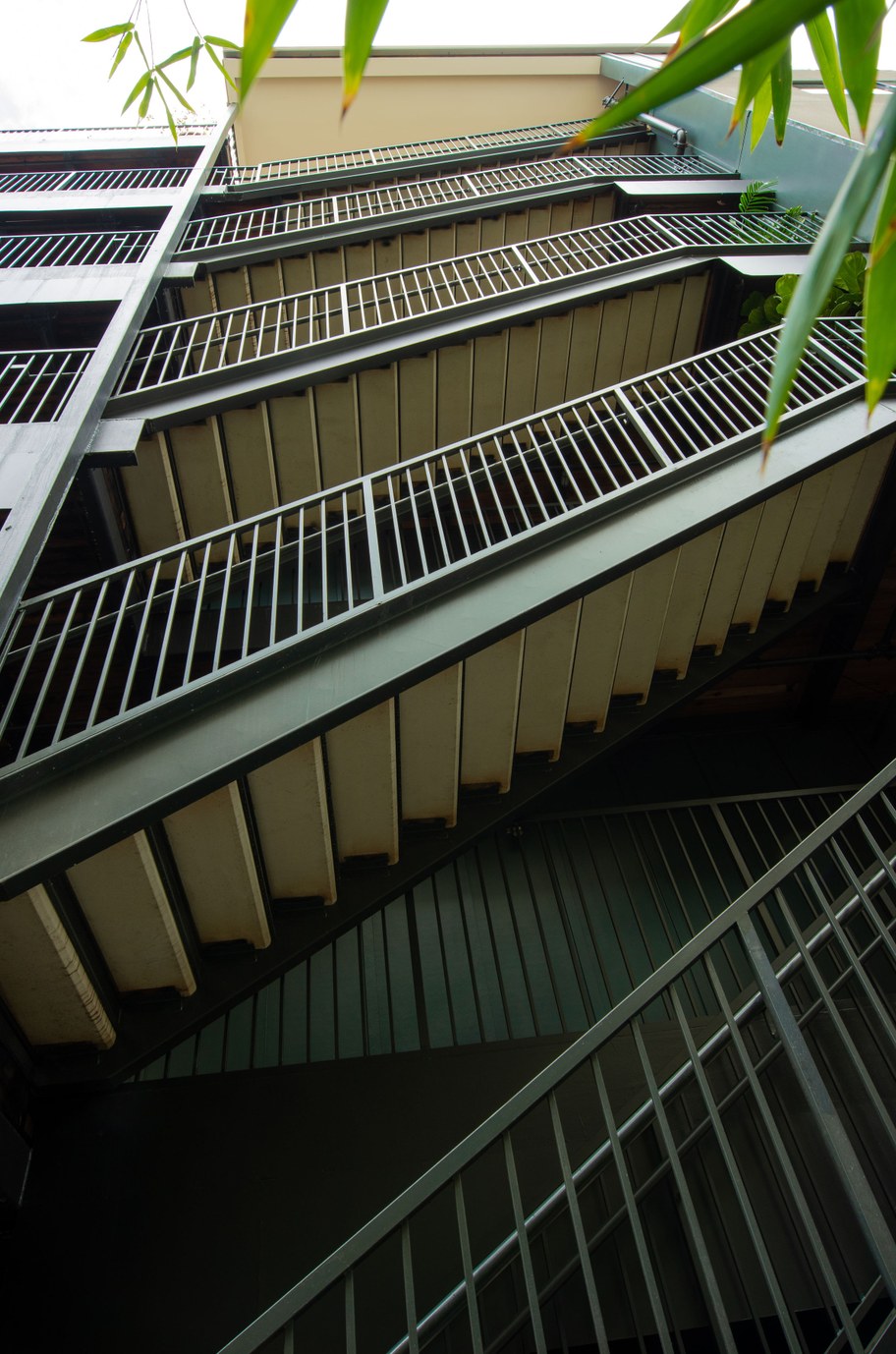 A giant stairwell connects all the suites and common spaces in Treehouse. Photo credit: Cynthia Fisher.

Jason Ericson is another Treehouse resident. “I'm really most excited about the people, excited to live in a place where I actually know everybody and can interact with them on a daily basis,” he says. “Up until moving into Treehouse, I've been living by myself for a few years. And I'm just excited to not be doing that anymore.”

Treehouse co-founder Joe Green is a Harvard grad who helped get Facebook up and running. He isn’t surprised by Ericson’s desire to live with other people. He thinks humans are hardwired for community and evolved to live in close-knit groups. But he says in modern America, we’ve gone the opposite direction.

“I think it's a sad thing about America and in many ways even more particular about Los Angeles, which is that wealth buys you isolation,” Green says. “Like the more money you get, the further away you live from other people, the bigger your house, the bigger your yard. We know that the farther people live apart, the longer their commute, the less happy they are.” 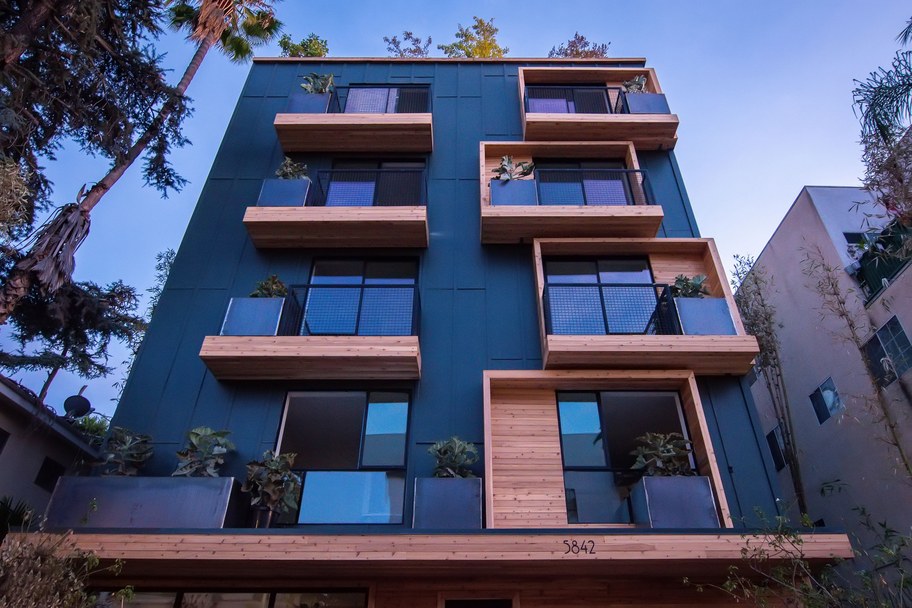 Jason Ericson says he’s torn about living at Treehouse during the pandemic. On the one hand, it makes him really nervous to be around so many people because it’s hard to control or monitor everyone’s social distancing practices. But he says, “I'm happy that I'm at Treehouse because I’m glad to be around people who I know would also support me if I did get sick.”

Ericson is staying at Treehouse and self-quarantining in his bedroom. He has food delivered, and only leaves to walk his dog. 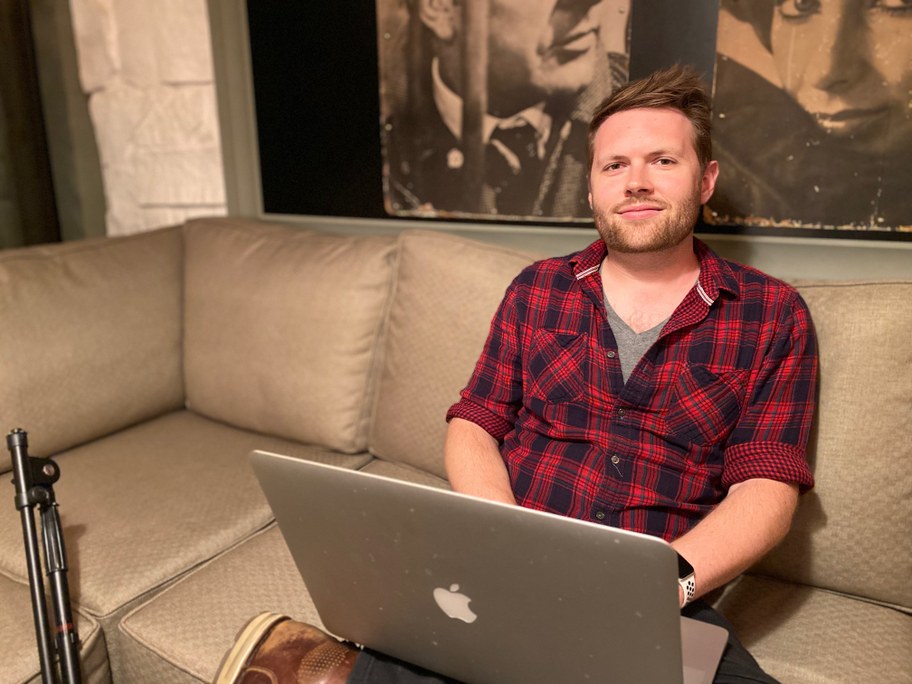 Resident Jason Ericson moved into Treehouse to find community. But he’s struggled with how to stay safe during a pandemic in a building with so many people. He’s pictured sitting in the coffee shop. Photo Credit: Adriana Cargill.

Ultimately, Jade Brandais decided to leave Treehouse and return to her family home in Orange County. She seals off her part of the house and stays 20 feet away from her parents.

“It really just came down to logistics and statistics of contracting the virus.” Brandais says. “Between emotional comfort and physical comfort at the time, I have to think about the physical. If one of my roommates, or if someone at Treehouse got [coronavirus], it's most likely going to spread to the entire Treehouse community.”

There are a lot of different reactions to COVID-19 at Treehouse. Many residents are helping each other cope by hanging out over Zoom, playing virtual games, or spending time together in the common spaces — six feet apart. Some are tutoring other tenants’ high school-aged kids to pass the time. 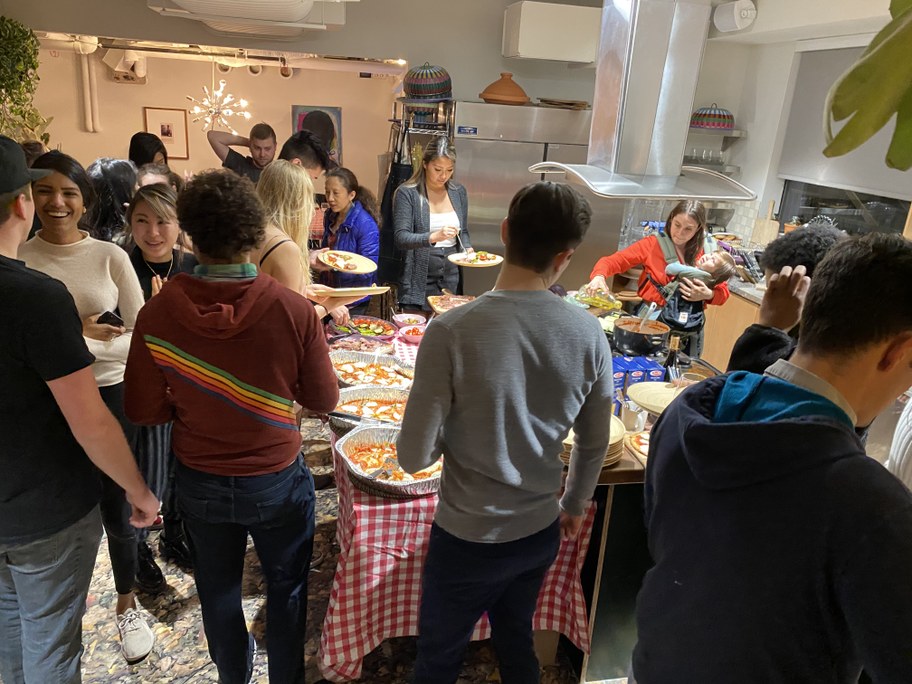 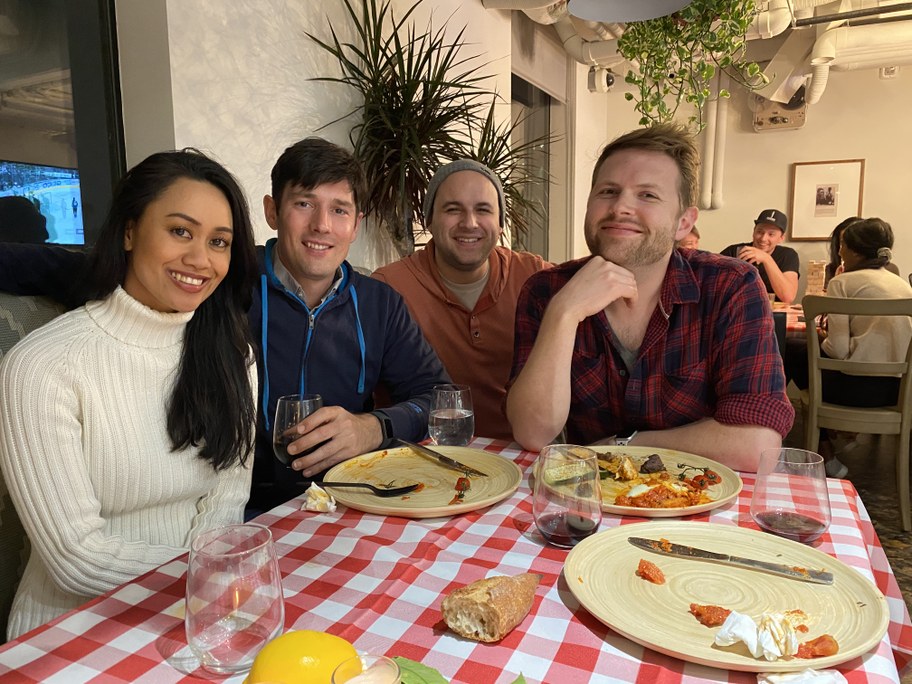 “In this moment, we're actually seeing the beauty of what Treehouse is,” says resident and Treehouse CEO Prophet Walker. “It’s when you're in proximity and you know your neighbor. You can be supported by your neighbor. And when you feel supported in the most difficult of times, it’s one sure way to minimize anxiety, depression and fear.”

Brandais is the only tenant to move out so far. Two new people have signed leases at the end of March for Treehouse.

Residents here are fighting this health pandemic the same way they fought loneliness. They’re turning to the community. There’s strength in being together, even while staying physically apart.

Co-living in the time of COVID-19

Physically apart but supporting each other: Life inside a co-living apartment during COVID-19

An apartment building in Hollywood called Treehouse was designed for co-living and face-to-face interactions between residents. Now in the age of COVID-19, residents are...

The idea of denser development near transit hubs is popular with city planners. It could increase the amount of affordable housing and decrease car commuting. However, the...

‘Look for the helpers’: A spotlight on people doing good during COVID-19

KCRW’s new occasional series, “The Helpers,” focuses on Angelenos who are helping those in need during the pandemic. Santa Monica resident Ian Snook is volunteering at a...