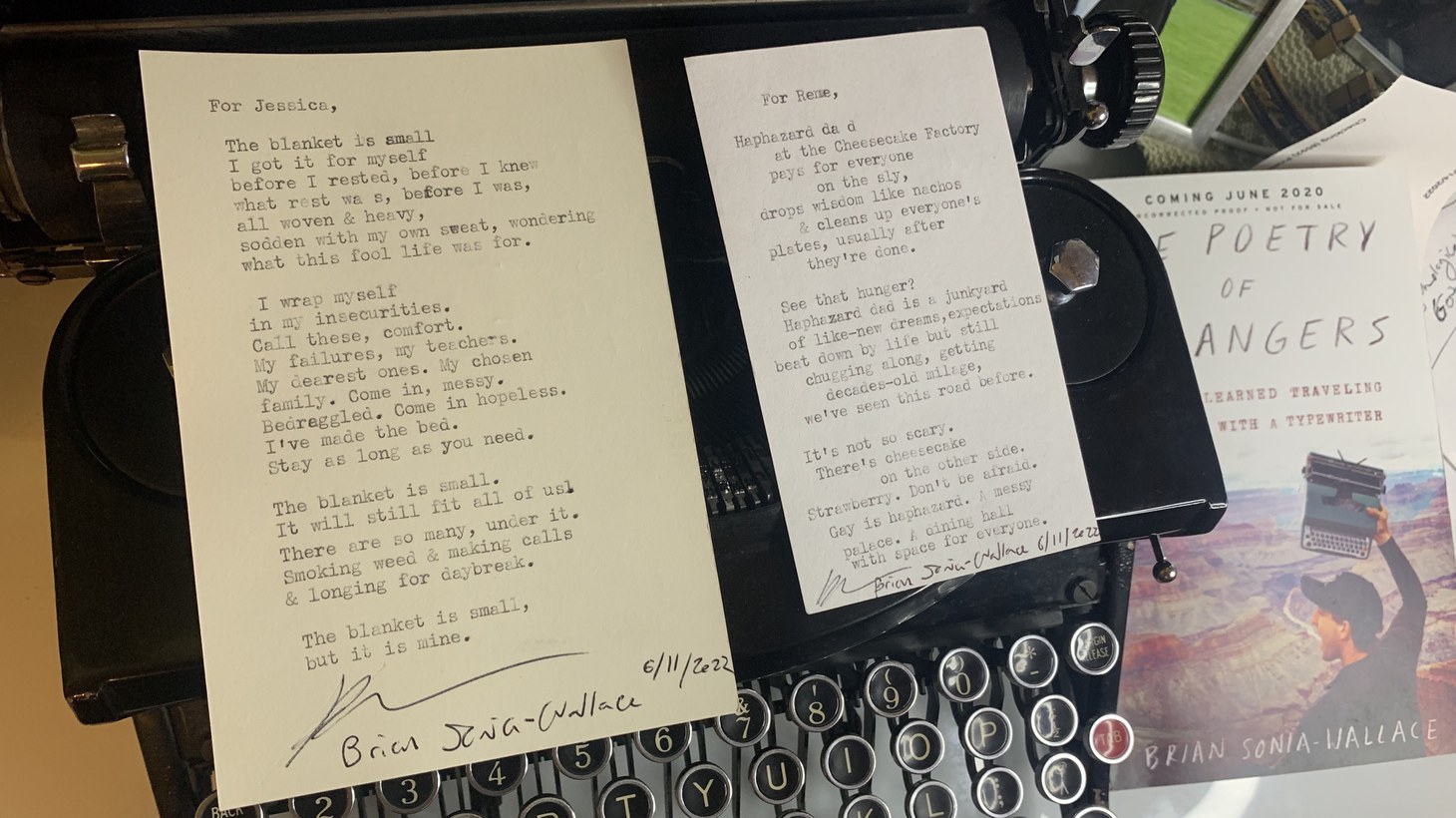 “There's someone on the line who is down to share a little piece of themselves and be vulnerable and get a piece of art and have a response to that — that's the best,” says writer Brian Sonia-Wallace about the Pride Poets hotline. Photo by Brian Sonia-Wallace.

On a recent Saturday night, poet Brian Sonia-Wallace gears up for a poetry writing marathon. He lights candles, turns on rainbow twinkle lights, and pours himself a half-pint mason jar full of whiskey. He sits at his desk in a corner of his West Hollywood apartment, just steps away from the drunken revelers stumbling home from the bars during LA Pride weekend.

Perched in front of him is a black, Remington Rand typewriter. It’s just one of the many typewriters he owns, some of which he’s loaned out to friends and fellow poets. Sonia-Wallace is ready for the ensuing, three-hour writing session.

Welcome to the Pride Poets hotline. It’s a space where people, no matter where they live, can call in (202-998-3510), and within minutes, receive a personalized poem, free of charge. A team of about two dozen people, mostly based in California, craft these writings, read them back to the callers, and offer to mail them each a copy.

When people dial in, the poets interview them about their life details. From the first, sometimes awkward, hello, poets start composing, taking notes that will help flesh out their work of art.

“There's someone on the line who is down to share a little piece of themselves and be vulnerable and get a piece of art and have a response to that — that's the best,” says Sonia-Wallace. He’s the current poet laureate for West Hollywood. 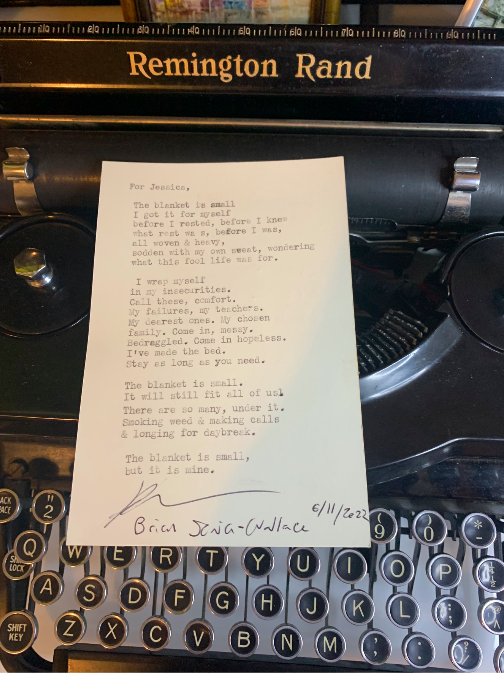 Jessica, who called in at the start of the Pride Poets late night shift, detailed her struggles with depression. However, with poet Brian Sonia-Wallace, her journey with mental illness took on a positive spin. Photo by Brian Sonia-Wallace.

The Pride Poets hotline was established in 2019 based on Sonia-Wallace’s experience traveling across the country, writing poetry for anyone interested.

The hotline has typically operated around LA Pride, but Sonia-Wallace hopes it will exist as a stand-alone event in the future.

This year, Sonia-Wallace says the Pride Poets fielded more than 200 calls, split across a daytime and nighttime shift. On average, each call lasted 10 minute, while each poem took between five to seven minutes to write. Poem topics range from depression, to potted plants, to coming out later in life, and even sitting through a Florida thunderstorm in the middle of the night.

An anonymous donor donated $15 for every poem the team wrote this year. In total, they raised about $3000 for the LA LGBT Center.

Sonia-Wallace says there’s never telling what will happen on any given call, but there is always a sense of adventure: “Because people have made the decision to call in, they tend to be a little more forthcoming right off the bat.”

“I don't think the role of a poet is to give advice. We're not medical professionals. The role of the poets is just to listen and to hear what the person is saying, and to try to inhabit that reality and try to flesh it out a little bit,” Sonia-Wallace explains. “There is a sense that what people give you, is what people give you. That has a universality to it.”

In his debut novel, “Cookies and Milk,” author Shawn Amos – son of the entrepreneur behind Famous Amos cookies – finds joy from a troubled childhood.