A health worker prepares a COVID vaccine shot at Dodger Stadium, a massive vaccination site in LA County, March 13, 2021. It's 25 miles from Hawaiian Gardens, but frequently it's the closest site with available appointments. Photo by Brian Hardzinski.

It was just before Christmas that Carl Kulzer started getting headaches. He felt dizzy and tired.

He found out a week later: He was positive for COVID-19. He’s since recovered and is doing well, but after that he was determined to get protected. “I thought hey, I better get this damn shot as soon as I can. I’m 83 years old, I’m no kid anymore.”

He’s been eligible to get a vaccine since mid-January. He admits he isn’t very good at navigating the internet, so he picked up the phone to make an appointment. He sat on hold for an hour before he learned that no appointments were available.

Kulzer lives in Hawaiian Gardens. At one square mile, it’s LA County’s smallest city. It has streets of stucco homes with grassy lawns, a park, and the Gardens Casino. What it doesn’t have are places to get a COVID-19 vaccine. On a good day, the closest location is at a site in Downey. But that’s 10 miles away — farther than Kulzer drives these days.

“I don’t drive much, but what I do is I go out with my walker, put it in the trunk of the car, and then I hold onto the side of the car and get in, but I try to limit my drives to four or five miles,” he says. “It was frustrating, but what could I do?”

Hawaiian Gardens is also one of LA County’s least-vaccinated cities, where 9% of residents are inoculated. It shares a border with Lakewood, which boasts double that rate, and with Cerritos, which has triple that rate, at more than 27% of its residents vaccinated. 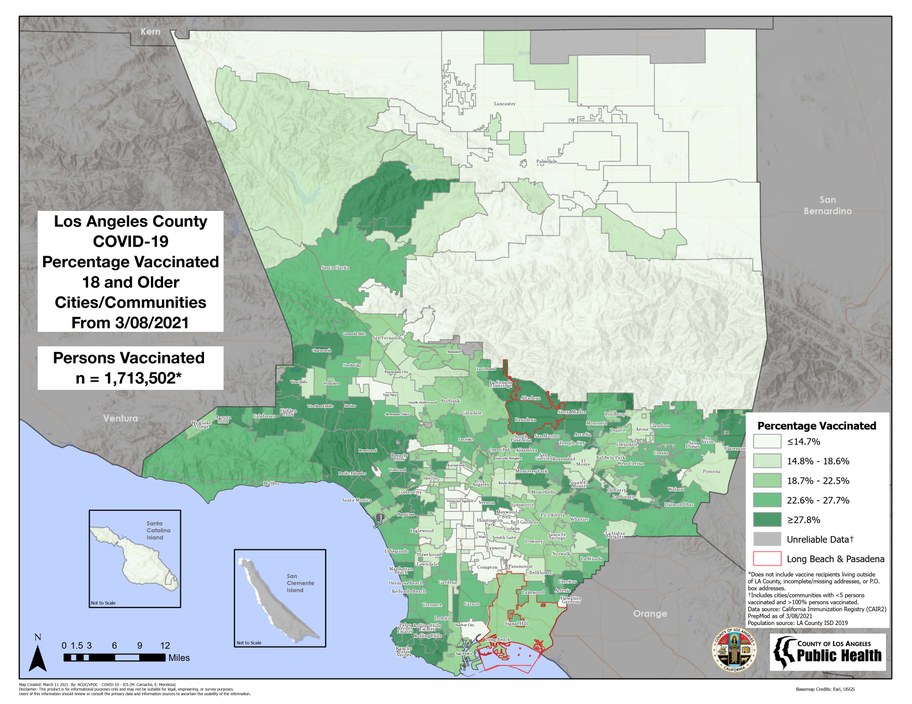 Even though Kulzer wasn’t finding an appointment, he was getting a lot closer than some of his neighbors. He has internet access, a car, and time to sit on the phone for an hour to get an appointment. That’s not typical here. At less than $50,000, the median household income is 30% lower than the county average. Nearly a quarter of residents live below the poverty line.

Plus, shots are hard to come by near Hawaiian Gardens. The city shares borders with Long Beach and Orange County. Both have their own health departments with their own pool of shots that Hawaiian Gardens residents can’t access. None of the local doctors’ offices administer the vaccine. A couple nearby pharmacies have it, but they’re not on the state’s appointment portal.

“It’s no coincidence that smaller communities have had higher rates of infection,” says Hawaiian Gardens Councilmember Myra Maravilla. “Although everyone is talking about equity, there’s no action to really turn that around. The talk of inequities, the disparities, that doesn’t mean anything unless the people that have the opportunity to make these changes actually make those changes.”

Attempts to get a vaccination site in Hawaiian Gardens or even in Cerritos — the next town over — have been met with red tape. Maravilla has asked for help from several LA County supervisors, from the county’s Department of Public Health, from local Congress people, even the White House COVID response team. And she’s still waiting.

“I would hate to see more residents from Hawaiian Gardens die because they just couldn’t get that vaccine in time,” she says.

LA County Public Health Director Barbara Ferrer says the vaccine equity problem is far from solved, but the answer isn’t putting a vaccination site in every neighborhood. “In many of our communities, the most trusted people that our folks would like to get vaccinated from are the providers that are already there. And our strategy has been to figure out ways to help them build their capacity.”

“To say, ‘We’re just going to partner with what’s already there,’ it’s like well, there’s really not much here.” she says. “In other cities they just go through their doctor, but a lot of people here don't have a doctor.” 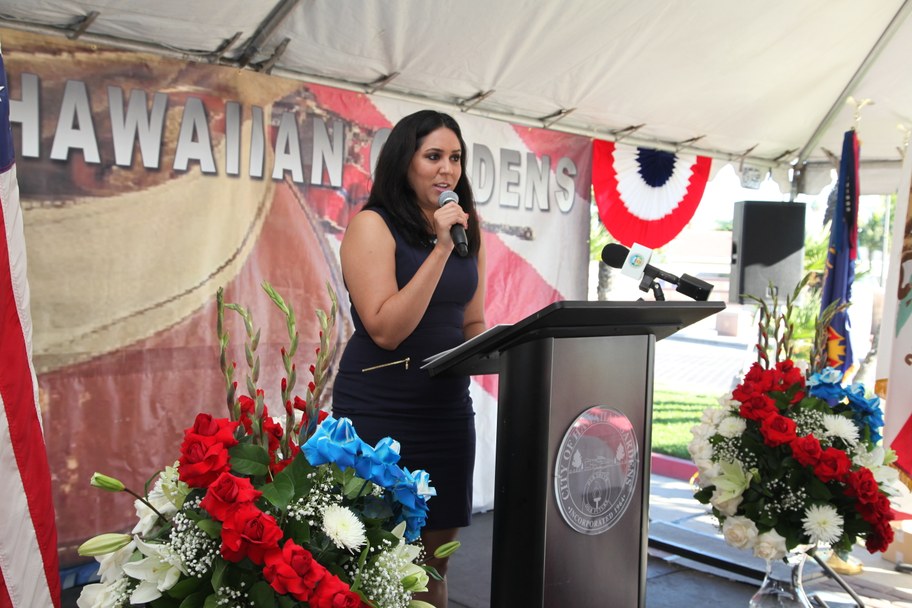 Councilmember Myra Maravilla speaks at a Veterans Day event in Hawaiian Gardens before the pandemic. Photo courtesy of Myra Maravilla

LA County has promised it’ll fill that gap with mobile clinics and pop-up vaccination sites. And with the arrival of the more easily distributed Johnson & Johnson vaccine, the capacity to do that tripled last week.

Maravilla says she’s been asking for mobile sites but officials have been unforthcoming.

This is all really discouraging to Hawaiian Gardens resident Eddie Garcia. Even as case numbers fall and vaccination rates climb, he doesn’t believe things are getting better. After the past year, he’s distrustful of local officials’ optimism. He says almost multiple times per week, ambulances pull up to his condo complex. 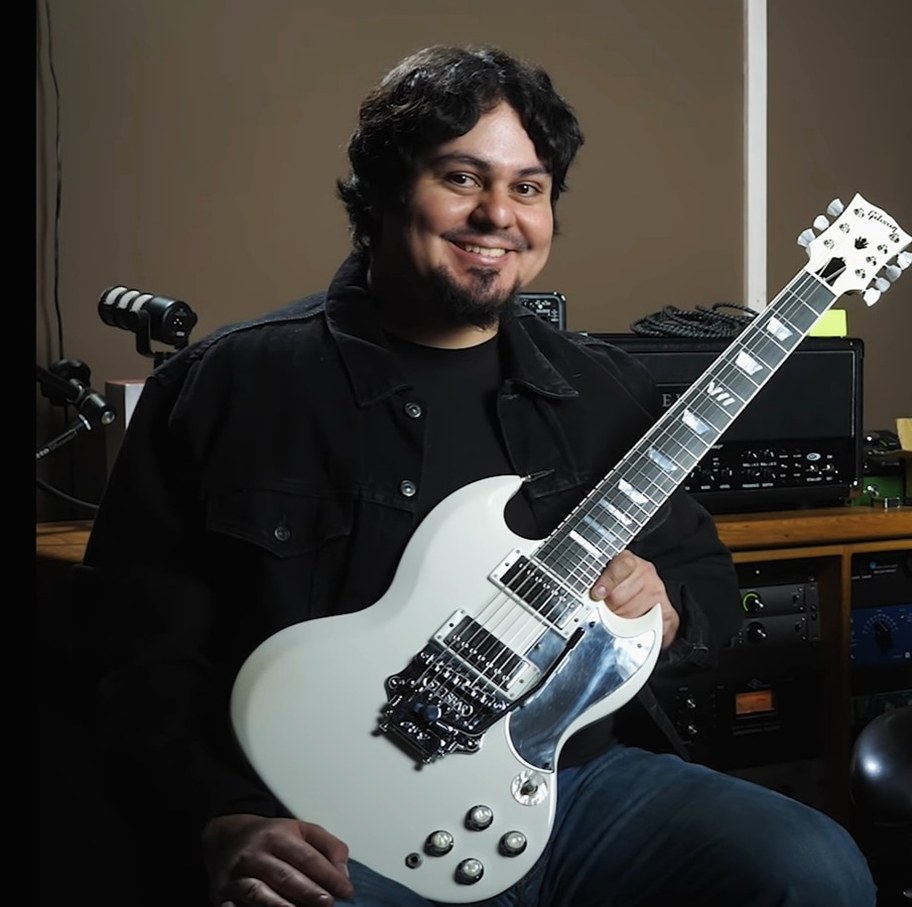 Eddie Garcia is an aerospace engineer and has been unemployed since March. He’s used the free time to care for his mother and pursue his passion of playing music.

“I feel awful. It’s really sad. We’ve lost a few people we’ve known for so long since I was a little boy. I basically grew up here. And it’s sad when you have to see them get pulled out with people in hazmat suits and stuff. … It’s like, man that could’ve been preventable.”

Garcia’s currently an unemployed aerospace engineer, and his mother’s a caretaker. Even though she has Alzheimer’s and is over 65, he’s waiting for the vaccine distribution to iron out the kinks before he takes her to an unfamiliar place to get a needle in her arm.

“We would love to get the vaccine but it’s just a hassle. You have to drive way out, you have to wait in line for hours,” he says.

Until then, he’s prioritizing her physical health and safety, keeping her friends and family at an arm’s distance.

Garcia’s neighbor Kulzer heard about another option through his weekly bridge game. He was going to get vaccinated, even if it meant lying.

“I talked to some people I play bridge with … [one player] was an ex-resident of Long Beach and she lied about living in Long Beach,” he says.

Kulzer lived in Long Beach for three decades, until his landlord sold his apartment a couple years ago and his rent more than doubled. But he still has a senior ID card with his old Long Beach address on it. So he called to make the appointment, and the health department said they knew his address was in Hawaiian Gardens. The jig was up.

He managed to get the shot anyway. His second dose was last Saturday. It’s a happy ending for Kulzer, but for everyone else without internet, without a car, and without a network of crafty bridge players, it’s a high-stakes waiting game, and the deck is stacked against them.

Why Hawaiian Gardens residents have a tough time getting vaccinated

Hawaiian Gardens has one of the lowest vaccination rates in LA county — 9%. That’s partly because there aren’t many vaccination sites nearby, and the closest one is 10 miles...

Some people view Johnson & Johnson as a “second class shot" due to its comparatively lower efficacy rating, reports LA Times columnist Erika Smith. That type of thinking is...

The race for one seat on the Board of Supervisors in Orange County has been decided. Costa Mesa Mayor Katrina Foley will fill the seat left vacant by Republican Michelle...