Payne Green, 88, after getting his first Pfizer COVID-19 vaccine. Photo by Kathryn Barnes/KCRW.

As vaccine eligibility opens to more people across California and the country, elderly people without internet or a helping hand are getting left behind.

My landlord, Payne Green, nearly became one of those people.

I’ve lived in a studio apartment above his garage in Santa Barbara for six years. He’s one of those rare, amazing landlords who leaves bags of hand-picked avocados outside your door. When my boyfriend and I asked if we could amend our lease so we could adopt a dog, he quickly agreed. And every December, he gives us a Christmas card with two $50 bills in it that reads “to my adopted children.”

Green lives alone. His wife died 15 years ago, his son passed away tragically young, and his daughter lives out of town. He doesn’t own a computer or cell phone. When he heard the vaccine was available, he did what most 88 year olds would do.

“I called my regular HMO doctor’s office, and they said that they would get back to me,” he said. “Two days later, I received a notice in the mail. It said that there was (sic) two numbers to call to set up an appointment to have the shots. When I called that number, they said the only shots they know that will be available would be in April.”

April — for an 88 year old with lung issues?

He told me this story as we stood outside in the driveway one evening in February.

The next morning, I logged into my computer and booked him an appointment myself. It took about 10 minutes. Why couldn’t the person on the other end of the phone line do that?

On the day of his appointment, I double masked, rolled down all my car windows for a strong breeze, and drove my landlord to Goleta Valley Cottage Hospital. 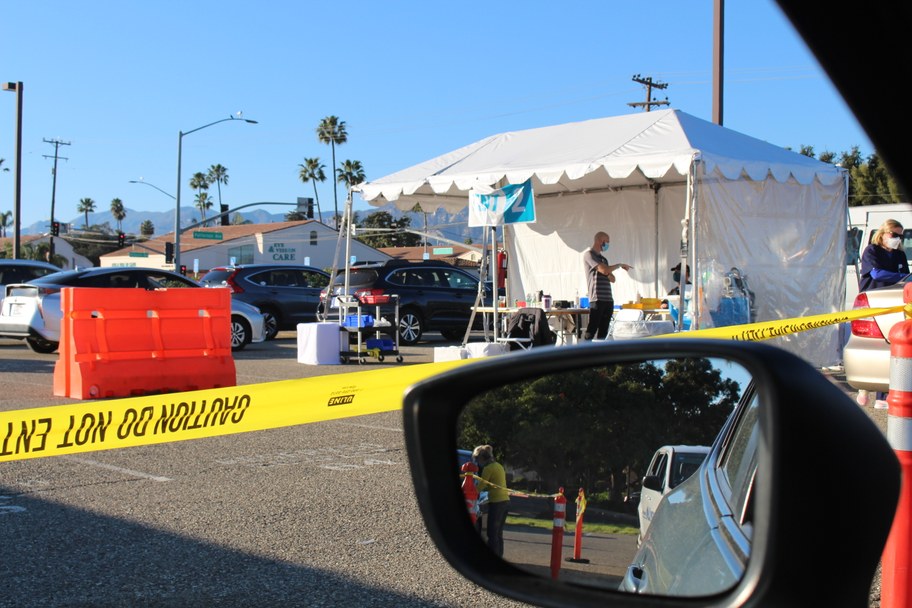 Dozens of elderly people wait in their cars at the Goleta Valley Cottage Hospital for their COVID-19 vaccine. Photo by Kathryn Barnes/KCRW.

After a quick poke, Green asked the woman who gave him the shot when his second appointment would be.

“They’ll reach out to you usually by email, letting you know when you can sign up,” she said.

Three and a half weeks later, that email arrived in my inbox and I booked his second appointment immediately. 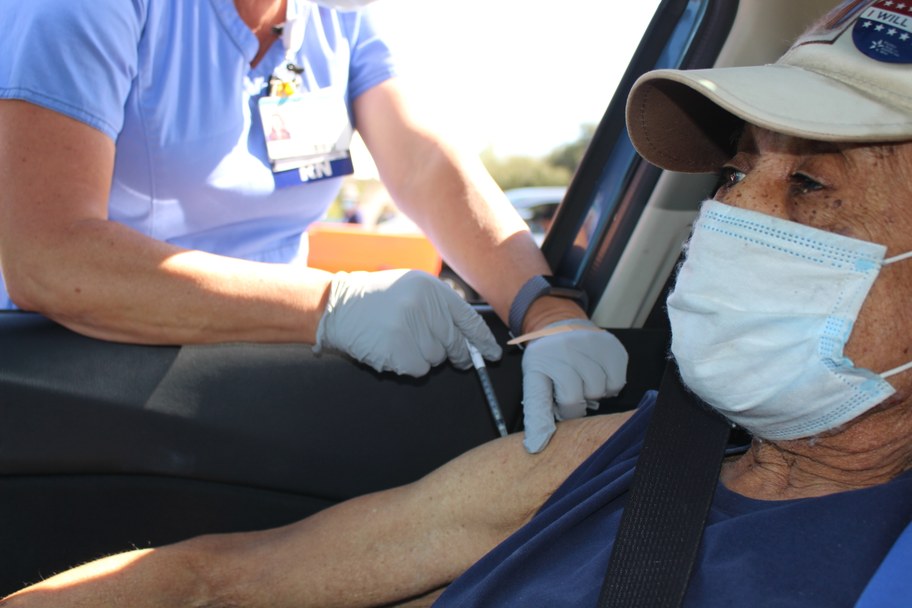 Green got his second vaccine dose in March. Photo by Kathryn Barnes/KCRW.

Now that he’s fully vaccinated, Green’s life won’t change in extraordinary ways. His days were pretty solitary before the pandemic. He’ll still have to wear a mask when he goes to the 99 Cent Store for his groceries. He’s never gone on a vacation since I’ve known him. And his regular meetups with Santa Barbara High School alum are still postponed.

But he feels more protected than his childhood friend, Conrad Sabiron, who died in January from COVID-19 at age 86.

“The last time I saw him was two weeks before somebody called me and told me he had passed away, and he was fine,” says Green. “When I talked to his wife, she said it happened so suddenly that they admitted him to the hospital, nobody could get close to him. Not even relatives could visit.”

Green doesn’t want his life to end that way.

“I hope it's with old age, not something that just happens overnight.”

I can’t help but think that without someone to book these appointments for him, Green would still be unvaccinated right now. How many others like him are out there, who may need a neighbor to help make the process faster and smoother?