Johanna Rodriguez rallies workers in a morning huddle before the first patients walk into the mobile vaccination site at Watts. Photo by Caleigh Wells

A dozen people in scrubs, fire department uniforms or matching t-shirts are setting up a series of tents in a church parking lot in Watts. Orange traffic cones line up on one side and a grid of chairs wait for people on the other.

It’s the last day this mobile COVID-19 vaccination team is stationed here. After five days, they will have vaccinated 1000 people.

That might not sound like a lot for a vaccination site, but they’re 1000 people who are least likely to go online and book an appointment. They might not have a car, internet connection, citizenship, or a home address.

“I recommended Watts as one of my priority communities, because this is where we see the highest case numbers, but also we’re seeing a big COVID-19 trend in this area,” says Johanna Rodriguez. She represents the Harbor and Watts areas for LA Mayor Eric Garcetti.

The city has 10 of these mobile vaccination sites. Rodriguez is in charge of this week’s site in Watts. She grew up in this South LA neighborhood, and picked this church parking lot because it’s where she spends her Sundays. It’s not far from a pharmacy that offers vaccines, but Rodriguez has to think about more than just how far someone has to travel.

“If you talk to anyone who doesn’t know Watts, they can say, ‘Hey [the pharmacy] is right there, it’s next door.’ Unfortunately, there’s a lot of layers to it. A lot of people just don’t have the transportation, but also the gang lines sometimes prevent a lot of the community members [from stepping] on the other side of a certain street because of where they’re coming from.”

Her other hurdle is her neighbors’ hesitation to get the vaccine. She says they are mistrustful of the government and pharmaceutical companies.

“The vaccine was made by the devil. It was made by children ... We have to go out there and dispel a lot of these myths. What helps is when I'm in church talking to people, giving an update, and I have the faith leader right next to me saying, ‘Yes get vaccinated.’ So it’s the voices of the community-based organizations, of our faith leaders. Sometimes they go a lot further compared to a city official coming in and saying that messaging.”

That’s why with each of these mobile sites, the next step after choosing a location is working with community-based organizations that can find local, unvaccinated residents and convince them to show up. For this site, that group is called Sisters of Watts, which has recently focused on feeding Watts residents during the pandemic.

“Joanna was like, ‘Hey y’all do a lot in the community. We would like y’all to come on board with us to help with the vaccine, get the word out.’ So we started calling people, we started walking around, we started going door to door, knocking on doors to let them know the vaccine is coming to Watts,” says Sisters of Watts CEO Robin Daniels. 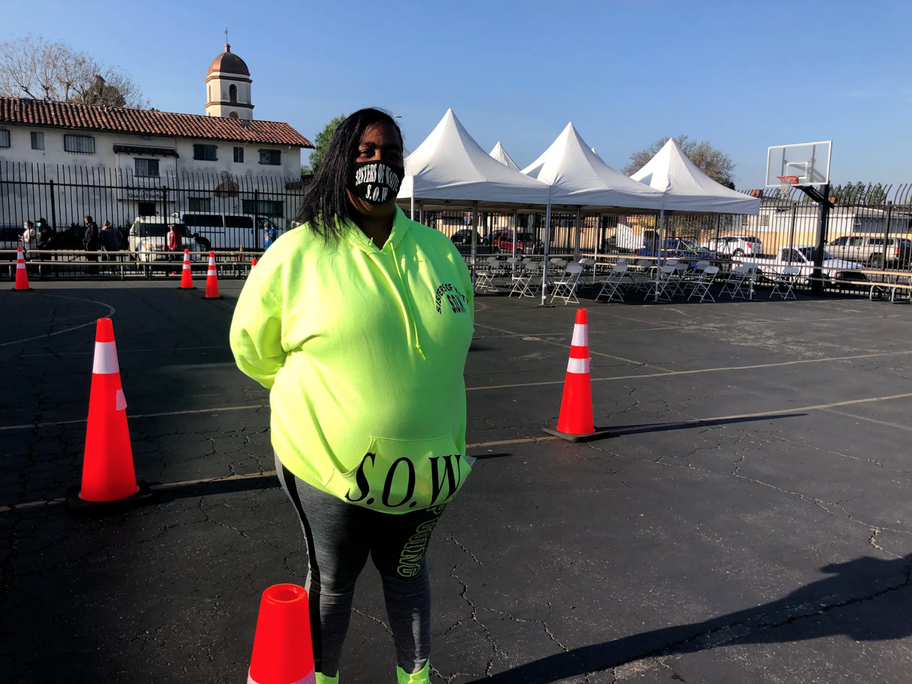 Nonprofit Sisters of Watts CEO Robin Daniels says she called her neighbors and knocked on doors to find local patients for the Watts mobile vaccination site. Photo by Caleigh Wells

They walked into shopping centers. They left flyers on doorsteps. Rodriguez says she even manned a fruit stand to help someone get vaccinated.

“Earlier this week there was a frutero, a fruit vendor, who couldn’t leave his post because he was like, ‘I can’t leave, I’m going to lose on money.’ So we stayed there so he can get vaccinated. And we just waited there until he came back and he had a line of people waiting for his business.”

Daniels says in a neighborhood with so much vaccine hesitation, her greatest advantage was being able to quell any fears about getting a shot. “I was able to say … only thing was a sore arm and that’s it. ... I could tell them Sisters of Watts got the vaccine.”

Rodriguez and Daniels told everyone interested when and where to show up. They didn’t put any information online because they didn’t want affluent people driving long distances to get here.

“We don’t advertise where we’re going to be. We used to for testing, but people were finding out so the city doesn’t advertise that anymore,” says LA City Mobile Manager Daniela Burza. 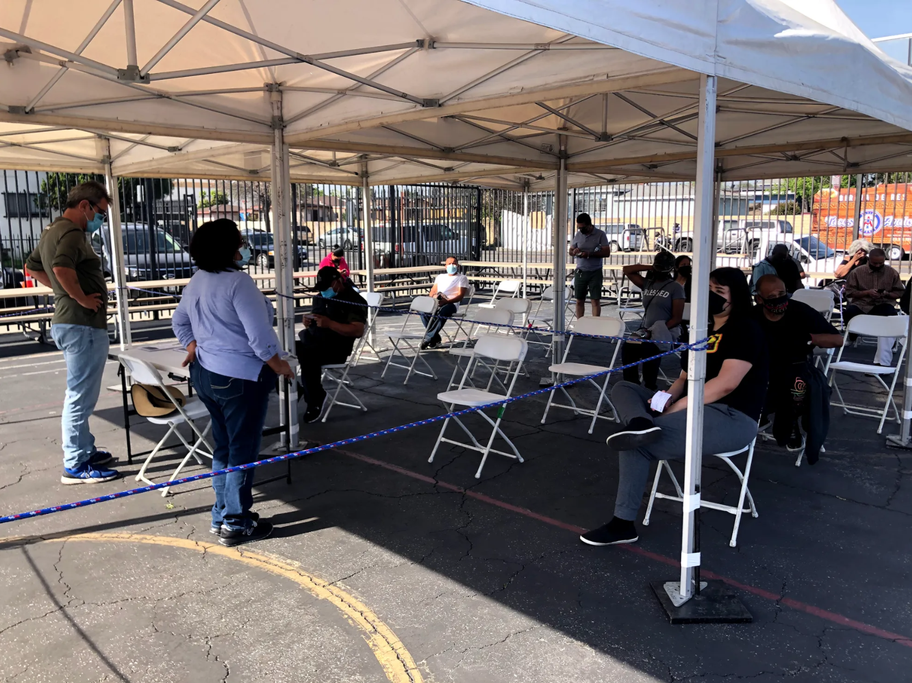 In the observation area after receiving their shot, residents learn about a recent COVID-19 rental relief program. Photo by Caleigh Wells

Some sites also take walk-up patients, depending on how many people come for their appointments. They’ll also make appointments later in the week for people who walk up and have to get turned away. That’s how Gilberto Lareos of Lynwood ended up getting his vaccine.

“My daughter was asking questions about how I can get the vaccine,” he said in Spanish, minutes after getting a shot. “We were here yesterday. They told me to come tomorrow so they can make me an appointment, so that’s why I’m back.”

The patients here say they found out about it from people in the community. Someone’s sister texted them, or someone’s aunt referred them. Garciela Bustamante received a flyer at her home in Watts. She echoed the sentiments of other patients around her.

“I felt fear at the beginning but then felt more comfortable,” she said in Spanish. “Please get vaccinated.”

In a matter of hours, any remaining proof of what happened in this parking lot this week will be gone, apart from 1000 people carrying their new vaccination cards. The mobile team gets a couple days off before they’re expected at their next stop, in Wilmington.