Views to the east from the upper level of the viewing deck at Sankofa Park, located where Crenshaw Blvd. and Leimert Blvd. split. Rendering courtesy of Perkins+Will.

In Leimert Park, Destination Crenshaw is a 1.3 mile-long open-air, linear museum that features permanent and temporary art celebrating black life and culture. The lineup of 100 public artworks by primarily black artists will be announced soon.

This past Saturday, shovels went into the ground to mark the start of construction. There was a fair, free food, speeches and performances from Issa Rae, Alex Isley and others. Malaya sang a tribute to Nipsey Hussle, an early supporter of Destination Crenshaw. 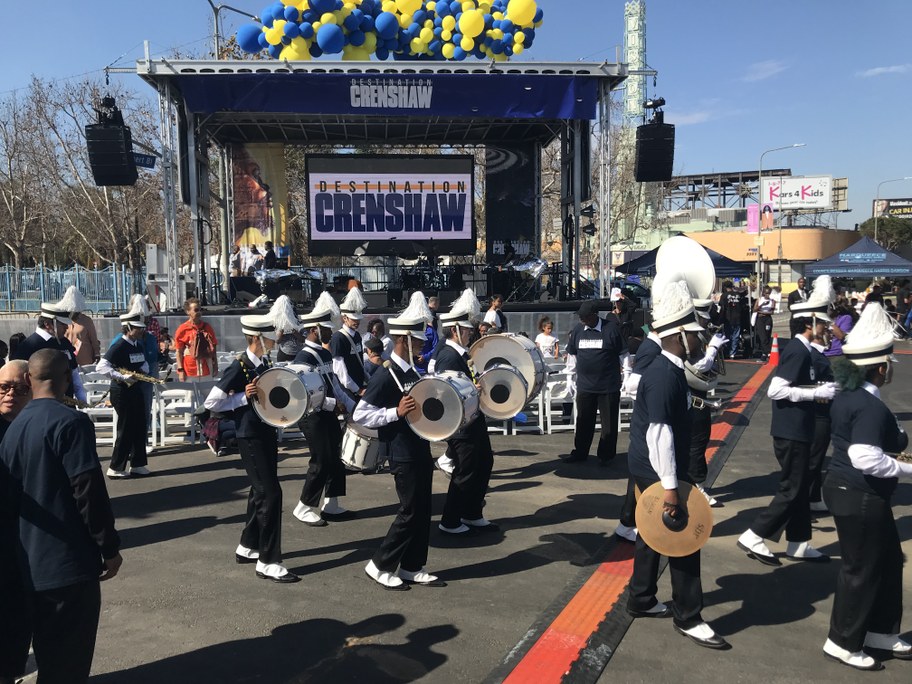 A marching band at the groundbreaking. Photo by Frances Anderton. 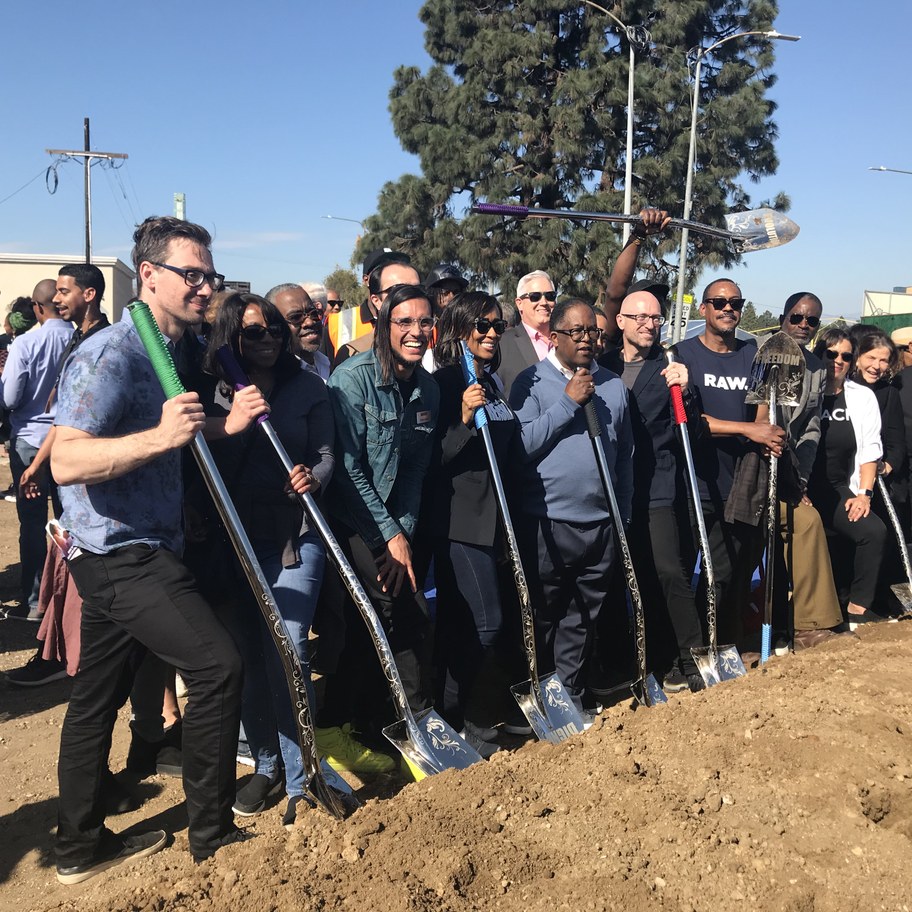 The start of construction begins with shovels being put into the ground. Photo by Frances Anderton.

Construction started amidst news that $50 million, or 50% of total costs, have been raised, enough to build the infrastructure and parks.

At Crenshaw Boulevard just south of Leimart Park, the forthcoming Sankofa Park will be the first -- and largest -- of 10 pocket parks punctuating Destination Crenshaw. The main attraction at Sankofa is a walkway that rises 30 feet, becoming a viewing platform looking north and south.

Zena Howard, principal with the lead architect Perkins and Will, explained that the park “turns back on itself like the Sankofa bird, which is the Ghanain symbol for looking back and remembering your roots as you go forward.”

Some say the money has been slow in coming. There are also critics who say some artists don’t want to be involved on grounds of being complicit in the gentrification of the neighborhood.

Ironically, Destination Crenshaw honors African Americans while property values skyrocket and white homebuyers move into the area, having abandoned it for several decades.

Councilman Marqueece Harris-Dawson agreed that displacement is a deep concern in the Crenshaw District. But he rejected the notion that this art park was a cause, saying no one is dropping out and that poorer communities deserve art just as much as more affluent ones.

Moreover, on Saturday, it was pointed out that gentrification is already underway, due to the construction of the Rams stadium in Inglewood and the light rail line itself.

Takeaways from the groundbreaking on Saturday

Concerns about gentrification exist, as do worries about public safety at Destination Crenshaw. The art part is still unclear. 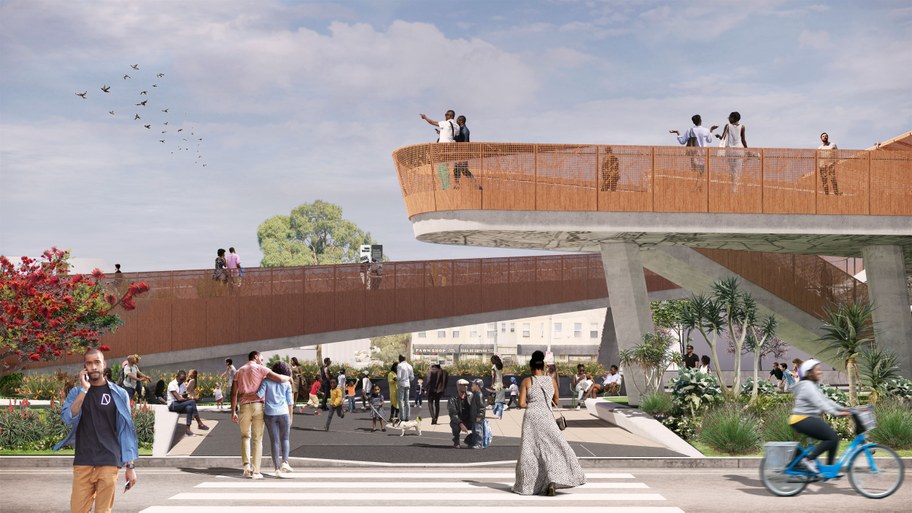 A rendering of Destination Crenshaw. Courtesy of Perkins+Will.

But the overriding feeling seemed to be one of excitement at the creation of a landmark celebrating black culture. Some said this is long overdue in a region that has many neighborhoods that give identity to a community -- think Koreatown, Chinatown, Olvera Street.

One person who made this point was longtime Crenshaw District resident Dr. Bernice Brown. She’s been involved with the public outreach phase of the design since the Destination Crenshaw project started. She said, “We helped found Los Angeles, and this particular area is an area that we have occupied since the 60s. I think it's very significant.” 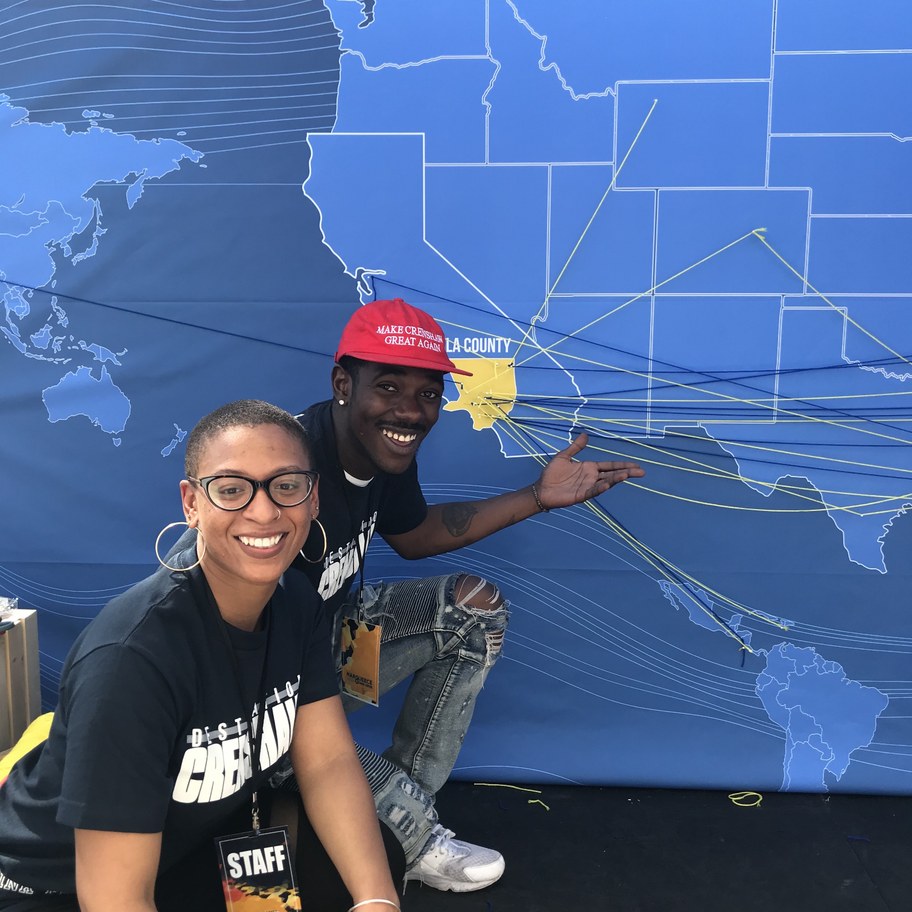 College students look to big tech as a destination to build their career.