The posters and other classroom visual aids at Neely’s Educational Supplies aren’t selling well during the pandemic. Photo by Caleigh Wells

Hundreds of thousands of public school students in Los Angeles are starting classes this week.

But with thousands of new COVID-19 cases every day, Governor Gavin Newsom has ordered schools to start the year remotely. And that has turned the back-to-school market upside down.

Jaimie Watson’s son Teg is starting sixth grade at Beacon Hill in Camarillo this month. His school sent them a list of supplies he’ll need, but Watson hasn’t stocked up.

“I haven’t bought a lunchbox obviously, I haven’t bought a backpack. And we have a lot of stuff at home that he’ll just use where normally I’d go out and buy stuff for him to take to school with him,” she says.

“I usually go in person, but I hate shopping right now because I hate wearing masks. A lot of stores, you have to wait outside in line because they only let a certain number of people in and it’s hot right now. … And so I’ll probably just sit down on Amazon and order it all.” 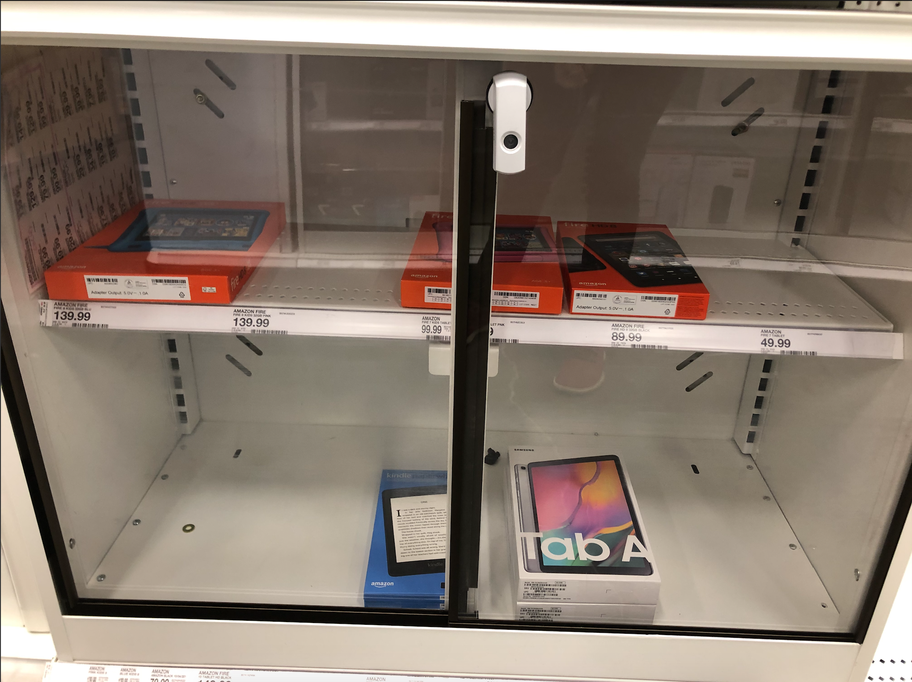 The tablet section at a Target in Mid-City is nearly sold out, while the office supplies aisle is fully stocked. Photo by Caleigh Wells

Watson is not alone. A nationwide survey by Deloitte found that 40% of parents plan to buy fewer traditional school supplies this year. They’re spending about as much as last year, but so much of that budget is shifting to pay for things like iPads or tablets and tech accessories. And this year, nearly two-thirds of them plan to do their back-to-school shopping online. Last year, it was less than half.

That’s not great news for Neely’s Educational Materials in South LA. It’s filled with all the pieces of primary school you forgot about: those plastic coins that teach kids how to count change, the little gold star stickers that go on multiplication tests, and the big posters that identify colors and days of the week.

The owner, Jerald Neely, is the third generation in his family to own the business. His grandparents bought the building in 1965. He says the seasonal business is always predictable — except this year.

“Things are a little sparse in here. Things we would normally carry year-round, we haven’t reordered because we’re still confused as to what’s going to be happening,” he says. “For instance, we don’t necessarily need to buy all the beautiful borders that you see for bulletin boards. … Schools usually buy large rolls of paper, like thousands of feet of paper. We’re not stocking that because schools aren’t going to be open.” 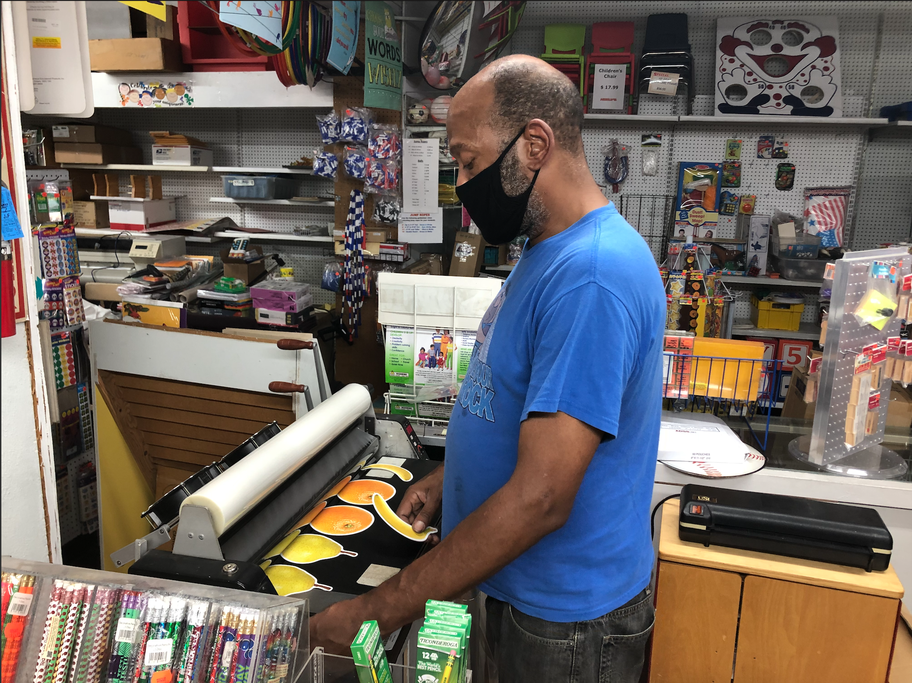 August is his Black Friday. The money he makes this month is usually enough to carry him through winter and into spring. He’s seen more parents than usual, which is why he’s out of things like flash cards and primary workbooks. Apparently tools to teach cursive handwriting and reading an analog clock have seen a resurgence. But his biggest customers are schools and teachers, and at least for now, there’s no need to stock up.

“This is making a bad situation worse and might accelerate by several years of some of the traditional brick-and-mortar retail that you would see coming along anyway,” says USC business professor Lars Perner.

Perner says the convenience of online shopping was already pulling more people to places like Amazon every year. And that might kickstart a new annual habit that could be the death knell for brick-and-mortar stores. “We’re going to see stores like Staples and Office Depot shutting some of their stores. That may not happen right away, that may be six months down the road,” he says.

Neely says Amazon has always been his biggest competitor. Their online business has driven down his prices, and taken customers from his website.

Neely’s business might be struggling, but the upheaval to the back-to-school market has helped others thrive.

We have been fortunate to experience a pretty extensive increase in our business because a lot of families are home nowadays, and they’re trying to revamp their kids rooms,” says Kevin Aghayan co-owner of the store Kids Only Furniture in Burbank. 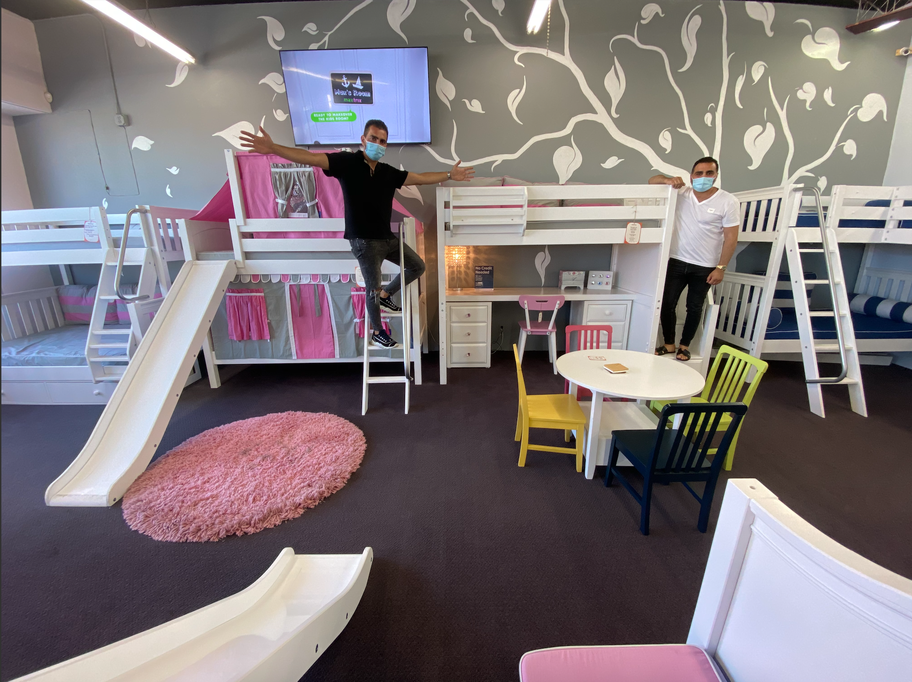 Aghayan says summer is usually a busier time for the store, but even as the end of August rolls around, business is not slowing. He estimates sales are up 30-40%, and parents are flooding the store to turn their kids’ rooms into a work-from-home space.

“Kids are spending more time in their rooms doing arts and crafts and getting ready for the school year. Loft beds have been super hot because for the same amount of space you’d have for a twin-sized bed, you can have so many more things such as a desk,” he says.

Neely says even though it’s a tough year, their business is more financially secure than others. He and his family own the building, and in the past 20 years as rents go up and revenue goes down, they’ve survived even as they’ve seen other local school supplies stores disappear. Just as in the past he’s phased out supplies like video cassettes and DVDs, he’ll adapt.

“Schools are finding new ways to operate and there’s no guarantee that they don’t find better ways to operate,” he says. “We’ll try to fill those needs and hopefully be here another 60 years.”

Parents usually prepare for back-to-school by spending hundreds of dollars per child on supplies and clothes. But this fall semester is starting with virtual learning, and...

Chris Ball, founder and CEO of Ball Family Farms in LA, says business is booming during the pandemic.

Amid heat wave, how are LA’s cooling centers adhering to social distancing rules?

The excessive heat warning for Southern California is in effect until Thursday.