Paul Bullock loves cooking with natural gas. He owns the Eagle Inn, a bed and breakfast in Santa Barbara just a few blocks away from the wharf.

“We make scrambled eggs, bacon. And then on the weekends, we'll do waffles, crepes, pancakes, all the sweet stuff that people really dig,” he says.

His gas stove has two burners, a griddle, and an oven. It switches on and off fast. The heat spreads out evenly. He can flip pancakes while cooking quiche on the bottom. So when Bullock heard about a change in the building code that Santa Barbara City Council was considering, he grew concerned.

City Council may pass an ordinance requiring new construction to be all-electric. That means new homeowners wouldn’t be allowed to install the type of stove Bullock loves. They wouldn’t be allowed to have gas heat or gas-powered hot water either. More than 40 cities in California have put in similar regulations, but this would be one of the first cities in the southern half of the state to go this far in limiting new natural gas infrastructure. 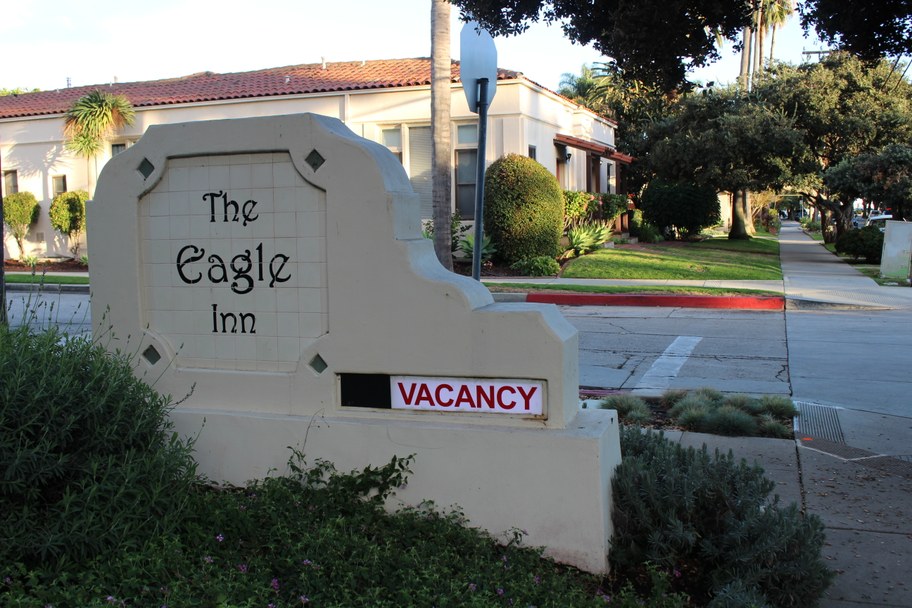 The Eagle Inn is one of countless businesses in Santa Barbara that rely on gas for cooking, heat, and water. Photo by Kathryn Barnes/KCRW.

Supporters of the ordinance say banning new natural gas lines is crucial if the state wants to meet its ambitious climate goals.

“It really is a smart idea to bake this into buildings at the beginning because then we don't have to retrofit more places because eventually we are going to have to get off fossil fuels,” says Leah Stokes, an assistant professor at UC Santa Barbara, where she works on energy policy.

But in Southern California, where storms, wildfires, and wind can cut our power in an instant, is it smart to rely on electricity alone?

“It's not a secret that here in Santa Barbara, we have power shut-offs and rolling blackouts and times where we have no electricity," says Bullock.

Bullock is right. On hot, windy days, the state’s main electrical suppliers, PG&E and Southern California Edison, have begun shutting off the power to prevent wildfires. Major storms, mudslides, and fires can also knock out the power, and climate scientists say we should expect more extreme weather events. So if more and more homeowners start relying on electricity alone to charge, heat and cool everything in their house, what are they left with if it goes out?

City Councilmember Kristen Sneddon is well aware of this concern.

“The issues with the electrical grid being unreliable has to do with climate change and the extreme weather events we're having, drought, and becoming a tinderbox, basically,” says Sneddon, who also teaches Earth Science at Santa Barbara City College.

To combat the unreliability, she wants Santa Barbara and other cities to decentralize their electricity system by creating more community microgrids. She also wants to see more homeowners install solar panels on their roofs and batteries in their homes, like she did.

“I like to be self-reliant, and these power shut-offs are getting to be too much,” she says.

Now, if the power goes out at Sneddon’s house, she can tap into her battery to charge her electric car and preserve the food in her fridge. But she acknowledges the privilege she has to be able to make that financial investment.

Dennis Allen, the owner of Allen Construction in Santa Barbara, made green investments when he first built his all-electric home ten years ago. He installed solar panels, motorized awnings, and modern electric appliances like an induction stove.

It wasn’t cheap to build, but he says the extra expenses paid off over time.

“We just got our annual electrical bill, because we're net metered, and it was $143,” he says. “So even though some of the appliances are a little more expensive, and they're coming down, you make that up pretty rapidly with either greatly reduced or zero utility bills.” 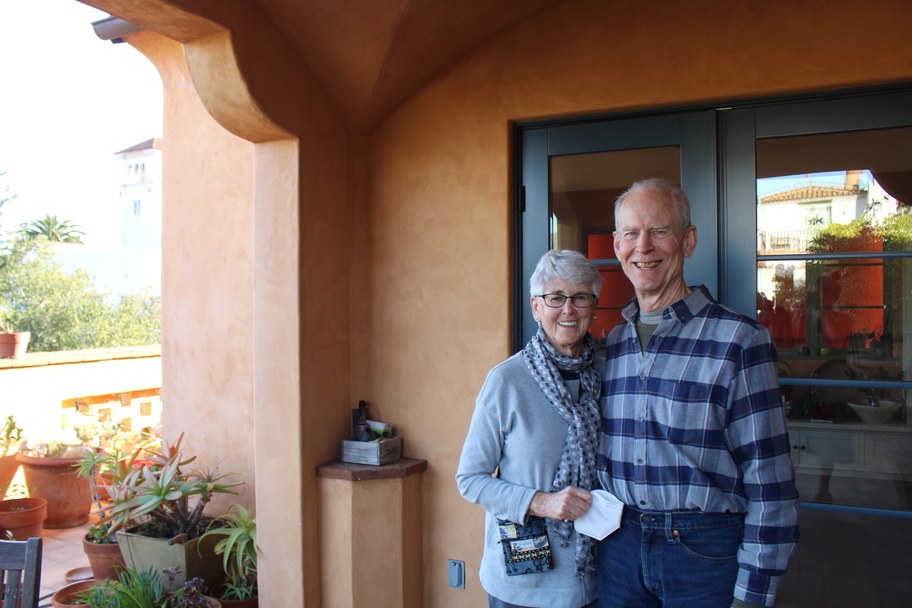 Dennis Allen and his wife standing outside their all-electric home. It wasn’t cheap to build, he says, but the investment has paid off over time with no gas bills and greatly reduced electric bills. Photo by Kathryn Barnes/KCRW.

Plus, he loves his induction stove. Unlike an electric coil stove, it uses magnets to distribute heat for a faster, more precise cooking experience.

He lists some of its perks: “It's a single surface that you wipe off with a sponge. I can put my hand right next to it, and I won't get burned. If a burner is on and you don't have a pot on it for a minute, it'll automatically shut off.” 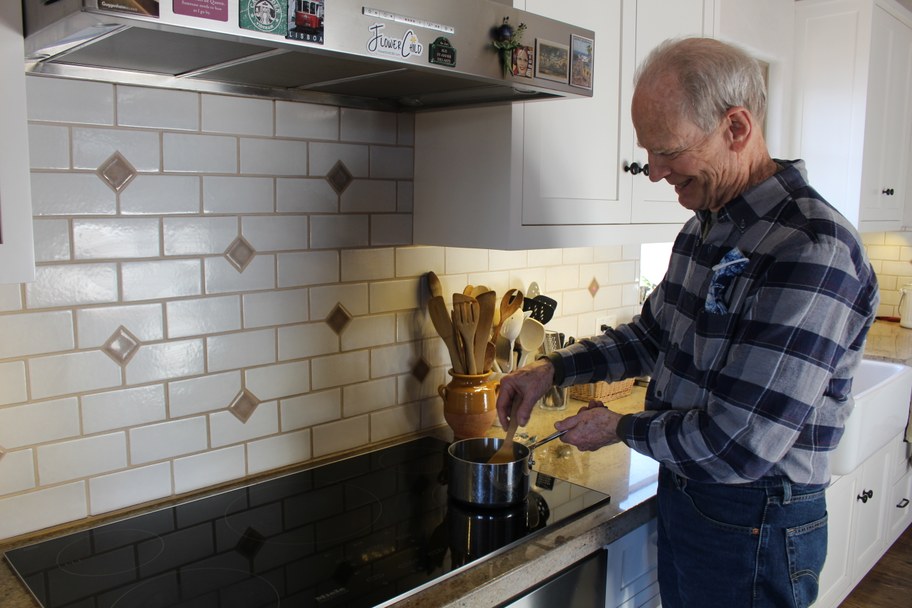 But not everyone is sold on induction. Some people are afraid of products that let off electric and magnetic radiation, like microwaves and cell phones, and don't want to add more into their homes. According to the World Health Organization, most studies have found that the radiation from induction is weak enough not to threaten human health, though it admits more research must be done.

Then there are home cooks and professional chefs, like Paul Bullock, who really love their gas stoves and can’t imagine cooking on anything else. Dennis Allen says if they tried induction, their minds might change.

Celebrity chef Curtis Stone, for example, has become a huge fan of induction stoves and installed them at two of his LA restaurants, Maude in Beverly Hills and Gwen in Hollywood.

“I love induction because it’s super easy to clean, uses way less energy, and brings something to a boil up to 50% faster,” he says. 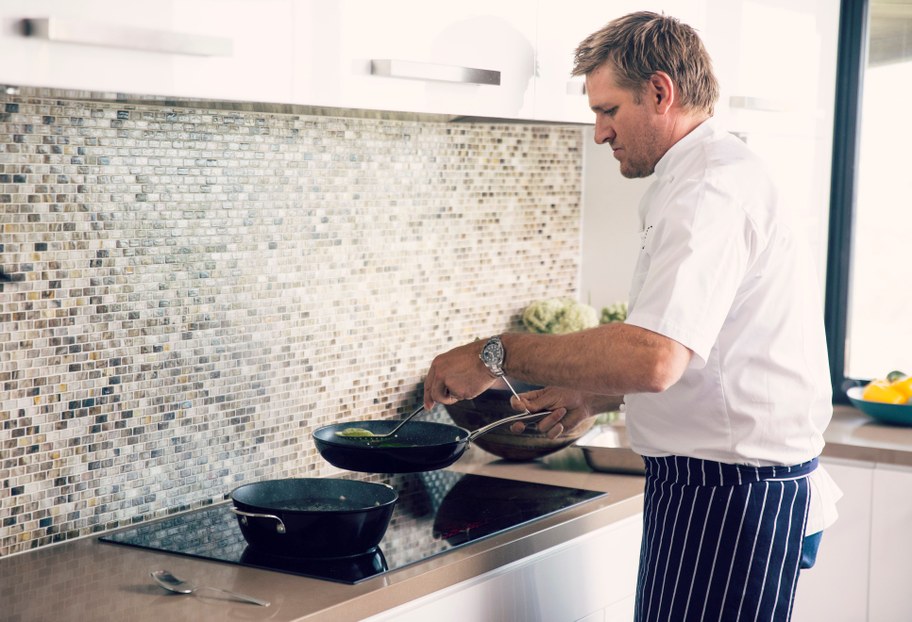 Allen and Stone still have a lot of minds to change. And in a place like Santa Barbara, where tourism is a huge source of revenue, pushback from the hospitality industry may lead the council to ban natural gas in new residential construction but not commercial construction.

Santa Barbara’s City Council is set to vote on the ordinance in April. In the meantime, the city’s natural gas provider, SoCalGas, isn’t going down without a fight. A front group for the company called Californians for Balanced Energy Solutions (C4BES) sent text messages to residents, urging them to oppose the measure. And natural gas trade groups have a history of paying Instagram influencers to rave about their gas stoves.

SoCalGas declined to be interviewed. Instead, the company sent a statement saying that the gas grid is essential for maintaining an affordable, reliable, and resilient energy system.

“I don't want to continue to pay money to this company that I feel is acting very irresponsible,” says UC Santa Barbara professor Stokes. “And since they're a monopoly, it's not like we can buy from a different company. The only real choice is to exit and to electrify your home.”

Stokes is in the process of doing just that. She just bought an induction stove to replace her gas one, and is now electrifying her heating and hot water system.

People are dining and dashing with takeout. Restaurants are paying the price

Before the pandemic, “dine-and-dash” was a phrase reserved for in-person dining. It meant running away before paying the bill.