Homekey is the state’s multi-billion dollar program to convert properties into housing for people living on the streets of California. About 6,000 people have already been housed through Homekey, and the goal is to house 14,000 more. Image by KCRW.

At a recent grand opening event in Anaheim, Orange County elected officials, business leaders, and homeless advocates celebrated the city’s first conversion of an aging motel into housing for the homeless.

An Econo Lodge motel, long an eyesore, has been completely renovated and turned into long-term supportive housing for 69 formerly unhoused people.

Anaheim Mayor Harry Sidhu sees an upside not just for the people who move into the new housing. He and other civic leaders hope the properties lift up the surrounding neighborhoods as well.

"We are taking a sleazy motel and converting a rundown place into a most beautiful project," Sidhu said at the grand opening. "It improves the neighborhood." 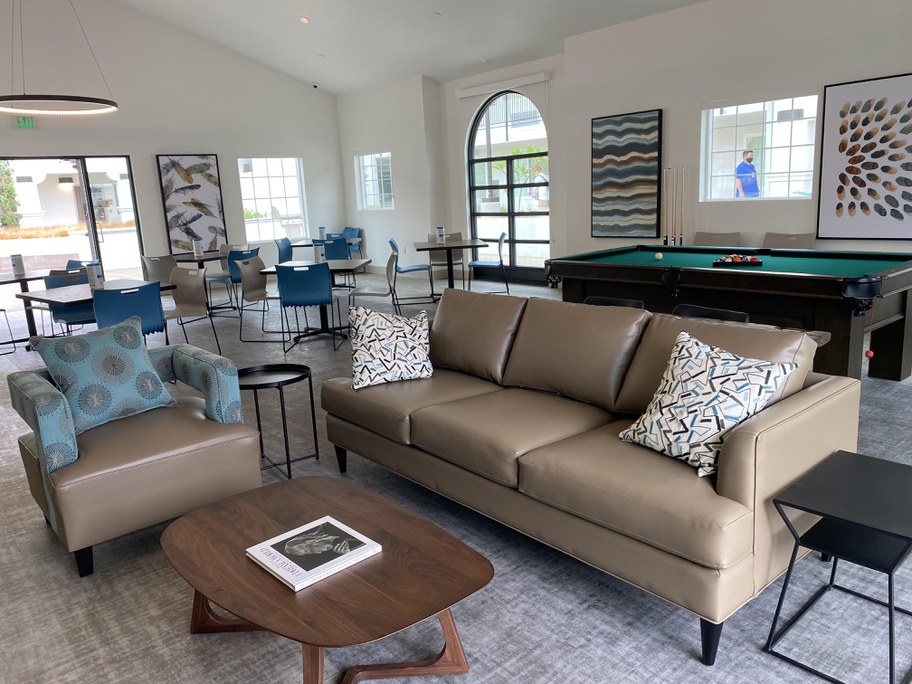 The common area is seen at a former Econo Lodge motel, now converted to housing for people experiencing homelessness. Photo by Saul Gonzalez.

Much of the work is being done under Homekey, the state’s multi-billion dollar program to convert properties into housing for people living on the streets of California. The conversion is done by working with local governments and nonprofits. About 6,000 people have already been housed through Homekey, and the goal is to house 14,000 more.

To meet Homekey guidelines, most of the financing was arranged within a two-month window — very fast by the standards of low income housing development.

“We are stewards of public funding, so we have to make sure that we are using that wisely and efficiently,” says Michael Massie, Jamboree Housing’s chief housing officer.

Mayor Sidhu of Anaheim thinks there’s huge potential to transform his city’s many decaying motels through Homekey. He says that will both help unhoused people and the wider community.

“I’m going to do as many as possible if the funding is available to get these people off the street and clean the neighborhood,” says Sidhu.

In particular, Sidhu believes Homekey can help Anaheim and neighboring cities improve conditions along Beach Boulevard. The thoroughfare has long been notorious to residents for its many aging motels, long seen as centers of crime.

“Honestly, they are about sex, drugs and violence,” says Marleta, who doesn’t want her last name used because she’s embarrased to be homeless.

When she has the money, Marleta will check into the motels for temporary shelter, but she never finds the stays restful. “There have been times where I thought I was really going to die, so it’s scary out here.” .

She says she’s aware of Homekey and hopes the money can quickly turn more motels along Beach Boulevard into decent housing for unhoused residents, with on-site security and supportive services like addiction counseling.

Marleta says there’s no time to waste for the people trying to survive along Beach Boulevard. “They need to clean it up, and the first thing they need to do is give people somewhere to live.”