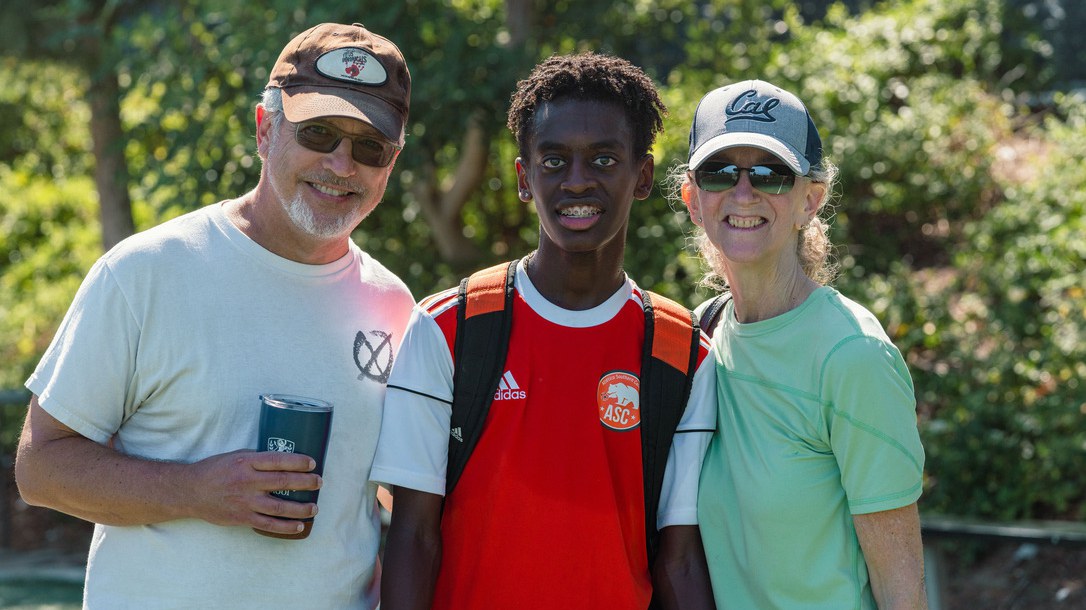 Tom and Melanie Elliott adopted MJ 12 years ago. Tom offers adoption as a possible solution for people who want to grow their families but are hesitant to bring another person into the world. Photo courtesy of Tom Elliott.

Sage Lyman thought she wanted two kids. Now she’s not sure she morally can.

“It's just something that's always really been on my mind,” says the 23-year-old resident of Mid-City in Los Angeles. “What world am I going to bring a child into?”

Lyman just graduated from USC with a degree in environmental studies. She suggests it’s “probably the most depressing degree you could possibly get.” She’s single, but she’s already grappling with this question as she pictures her future.

And she’s not alone.

The biggest study yet on climate anxiety and young people – published last year in the English journal The Lancet – found that 40% of Gen Zers surveyed worldwide are hesitant to have children because of the climate crisis. Other surveys have found that a similar number of millennials feel the same way.

And they’re not wrong to worry: The decision to have kids has a greater impact on your lifetime carbon footprint than anything else you do in life.

In the last couple years, the U.S. has seen its lowest birth rate in American history. Typically economic uncertainty is a leading cause, thanks to things like a global pandemic or high student debt. It can be a result of good news too, like greater access to female education or lower infant mortality rates. Increasingly, climate change has also started to show up in these statistics.

“Climate change is one factor, among others,” says UC Riverside Gender Studies Professor Jade Sasser. “Young people really are starting to feel like they don't have a choice about whether they can have the families that they want, because climate change is such a crisis now, and will be such a crisis in the future, that morally and ethically it doesn't feel right to bring another person into that who didn't choose to be here.”

That’s how Lyman feels. “I do want to go through that experience. But there's almost like a lot of guilt associated with that,” she says. “Am I really going to just increase the burden on our planet, and then make it a worse place for my child to grow up?”

The generations who have grown up dreading climate change are in typical American childbearing years now. For some, that means the questions stemming from climate anxiety become more urgent, and more painful.

“As climate change gets progressively worse, people are going to have to adapt. And I think that's going to be messy,” says Eli James, 29. “And it's 100% going to be a lot easier to navigate all that as someone without children.”

James grew up in Orange County and is a freelance video editor living in LA now. He says none of his friends have kids, and he sees foregoing parenthood as the socially responsible thing to do.

“The main aspect of it is not having kids is the best thing you can do to help mitigate or combat the climate crisis.”

But that doesn’t make it an easy decision.

“If I go to the grocery store and see a parent and a kid having a really sweet interaction, your heart just melts and you're like, ‘Damn, I want that,’” he says.

And as time goes on, the decision can get even harder. Michelle Weiner of Sherman Oaks is in her mid-30s and wants kids, but she’s feeling guilty about it. 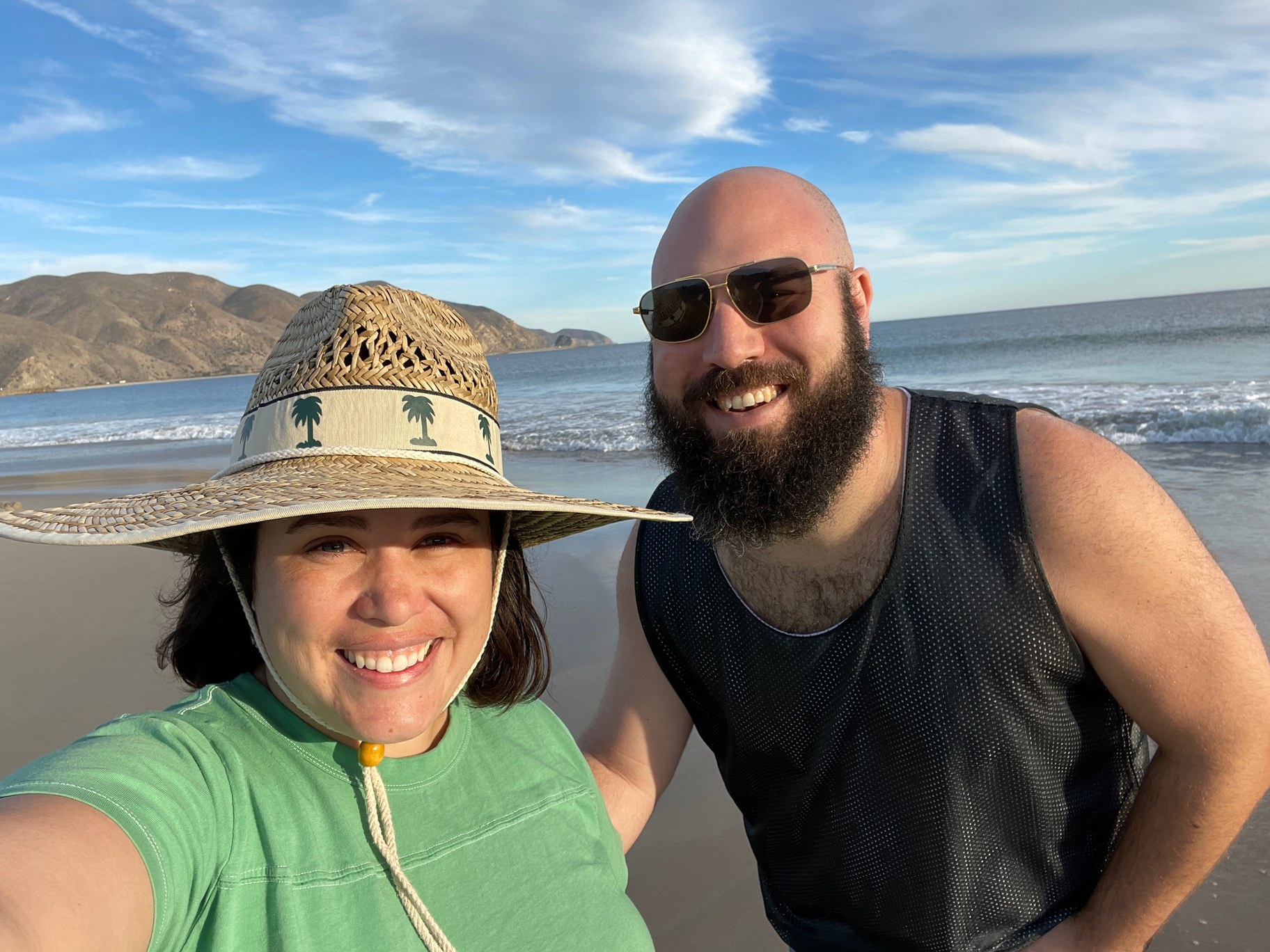 Between worsening drought and heat, Michelle and Keith Weiner worry that Southern California won’t be able to offer a liveable future for their potential children. Photo courtesy of Michelle Weiner.

“It’s this constant desire to grow my family. And maybe it goes down to some biological reasons that I can't necessarily pinpoint,” she says. “I always have had that.”

But the Weiners have not decided whether having kids is the right thing to do. Meanwhile, older members of their family are ready for them to start expanding their family.

“All of the older generation, even before we got married – my stepmom was like, ‘So when are you having babies?’” she recalls. “My mother-in-law also is like, ‘Okay, we're ready for grandbabies whenever you're ready.’”

Sasser’s research has found it’s not unusual for the potential grandparents in the equation to find such powerful climate fears bewildering.

“Older generations in their desire to have grandchildren or to reassure younger people, they tend to minimize or dismiss the concerns that Gen Z-ers or younger millennials have … saying that those damaging and destructive things aren't happening,” she says.

Weiner grew up in the Antelope Valley, and she’s worried that soon her home won’t be hospitable to her future kids because triple-digit heat and water scarcity is already a problem there.

“My husband jokes that we'll have Mad Max children, and they're just gonna have to fight for water one day,” she says. “And I'm like, ‘Yeah, funny joke, but I really think that.’”

Her dream of having two children is clouded with guilt and concern. But she hasn’t ruled out having at least one.

As Lyman, James and Weiner struggle with how to balance their desire to grow families with guilt over their climate impacts, Tom Elliott, 59, says he’d like to offer a solution.

Tom and Melanie Elliott met later in life, so when they wanted to start a family, they ran into some fertility problems. They adopted their son 12 years ago.

“It is an interesting perspective, as climate change becomes a bigger and bigger issue, to think that we are helping a child who was already on the planet, and we're not adding to the stress on the planet by bringing another child into it,” he says.

Lyman reached the same conclusion. For now, her plan is to have one child and adopt another. She says it’s the natural balance between what she wants and what she’s afraid of.

“My dad was adopted, and I think he's a great guy. And a lot of my cousins were adopted,” she says. “That's kind of like the ideal compromise in my head.”

SNAP, hosted by Deirdre O’Donoghue, premiered on KCRW in 1982 and ran through 1991. It was a weekly three-hour love letter to alternative music and independent culture both...

For the first time in 50 years, Democrats have a chance to control the OC Board of Supervisors. But Huntington Beach — famous for its waves — just got hit by a red one.