Mel’s Drive-in Restaurant is located on Lincoln Blvd., at the corner of Olympic Blvd. “These [Googie-style] buildings were made for that modern lifestyle. They grabbed your attention as you drove down Lincoln Boulevard or Ventura Boulevard at 30-40 miles an hour. … You knew exactly what they were through the plate glass windows. You can see that there were people enjoying the restaurant,” says co-author Alan Hess.
Photo by Amy Ta.

Mel’s Drive-in Restaurant in Santa Monica features retro futuristic architecture known as Googie. From inside the diner, which started as Penguin Coffee Shop in the 1950s, KCRW talks with Michael Murphy and Alan Hess about their new book, “Googie Modern: Architectural Drawings of Armet Davis Newlove.”

“Googie” refers to a Hollywood-based coffee shop called Googie’s, which was built in 1949 by John Edward Lautner, who studied under Frank Lloyd Wright. It became a hangout spot for stars like James Dean, Marilyn Monroe, and Elvis Presley. Googie is also the pet name the shop’s owner had for his wife. That’s all according to Hess. 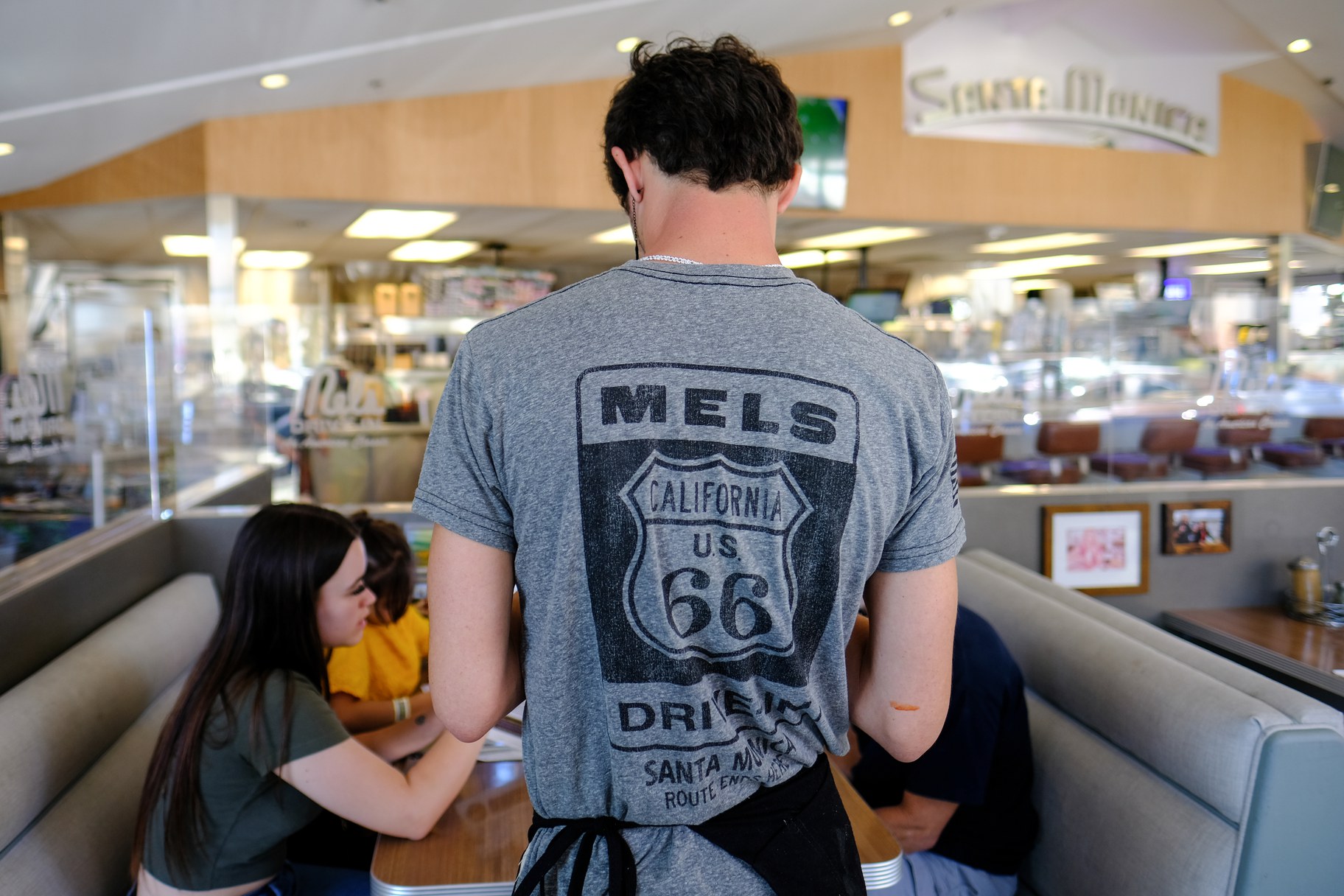 Mel’s also marks the end of the historic Route 66, which was known for roadside architecture.

“This is one of the great ways to end the road — with formerly Penguin and today Mel’s,” Murphy says. “And so we're here to celebrate the genre … Googie, but it's a sub genre of mid-century architecture. … We're here to celebrate the significance of the portfolio of Armet Davis Newlove … and how they use these drawings to convince their clientele to make these beautiful buildings.”

Armet Davis Newlove is an architecture firm that Louis Armet and Eldon Davis started in 1947, then Victor Newlove joined some 15 years later. 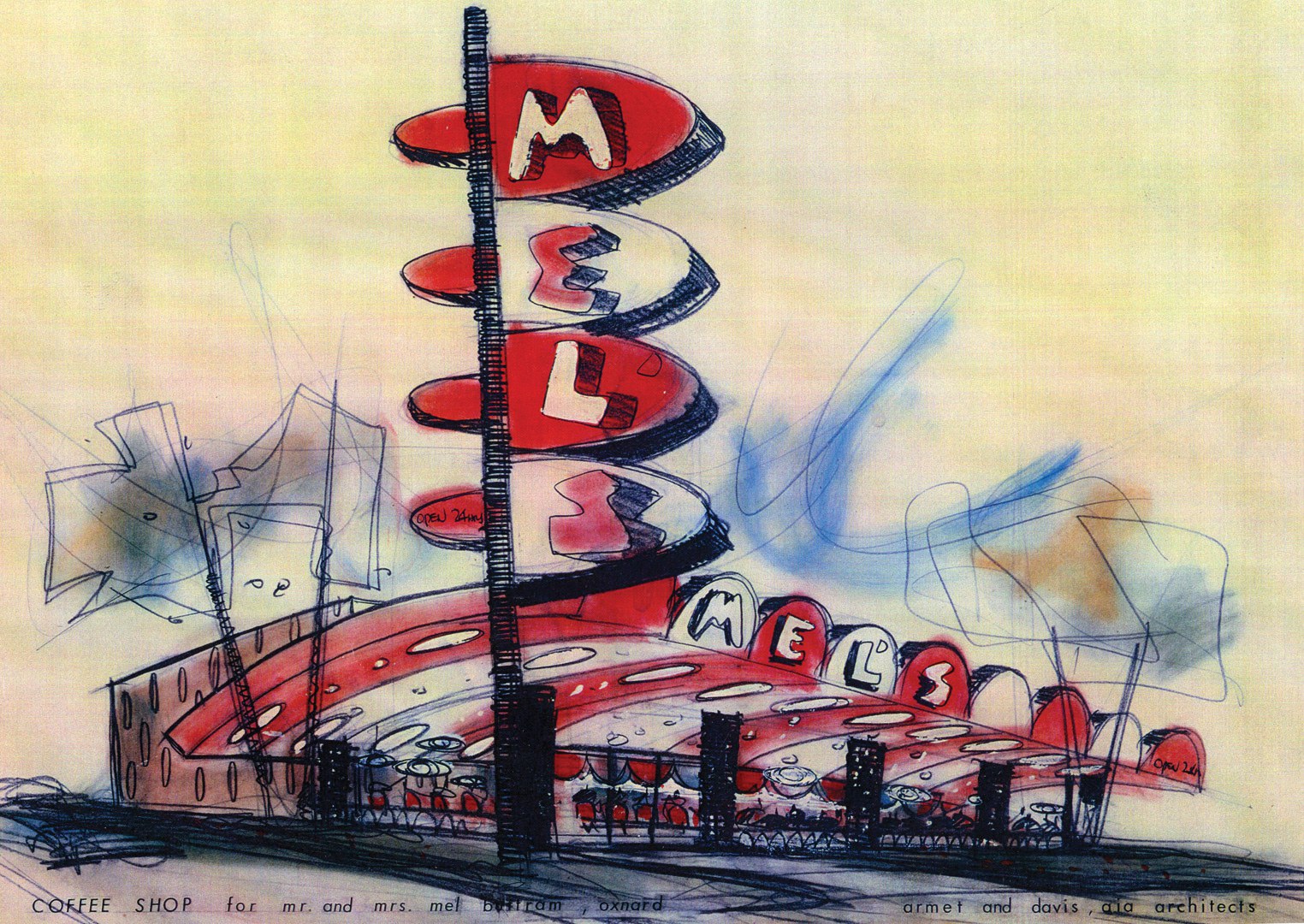 In the 1950s, Hess says, LA’s coffee shops, gas stations, car dealerships and homes had innovative and modern architecture, featuring roofs that were stretched to their limits, plus glass windows and neon signs.

“These buildings were made for that modern lifestyle. They grabbed your attention as you drove down Lincoln Boulevard or Ventura Boulevard at 30-40 miles an hour. And so they sold themselves. You knew exactly what they were through the plate glass windows. You can see that there were people enjoying the restaurant,” Hess says.

Murphy adds, “You can drive right up to it. … Post World War II, the whole world became affordable for a particular group of people, and these people celebrated that by getting out of their house, driving in their new cars, and pulling up into these diners.” 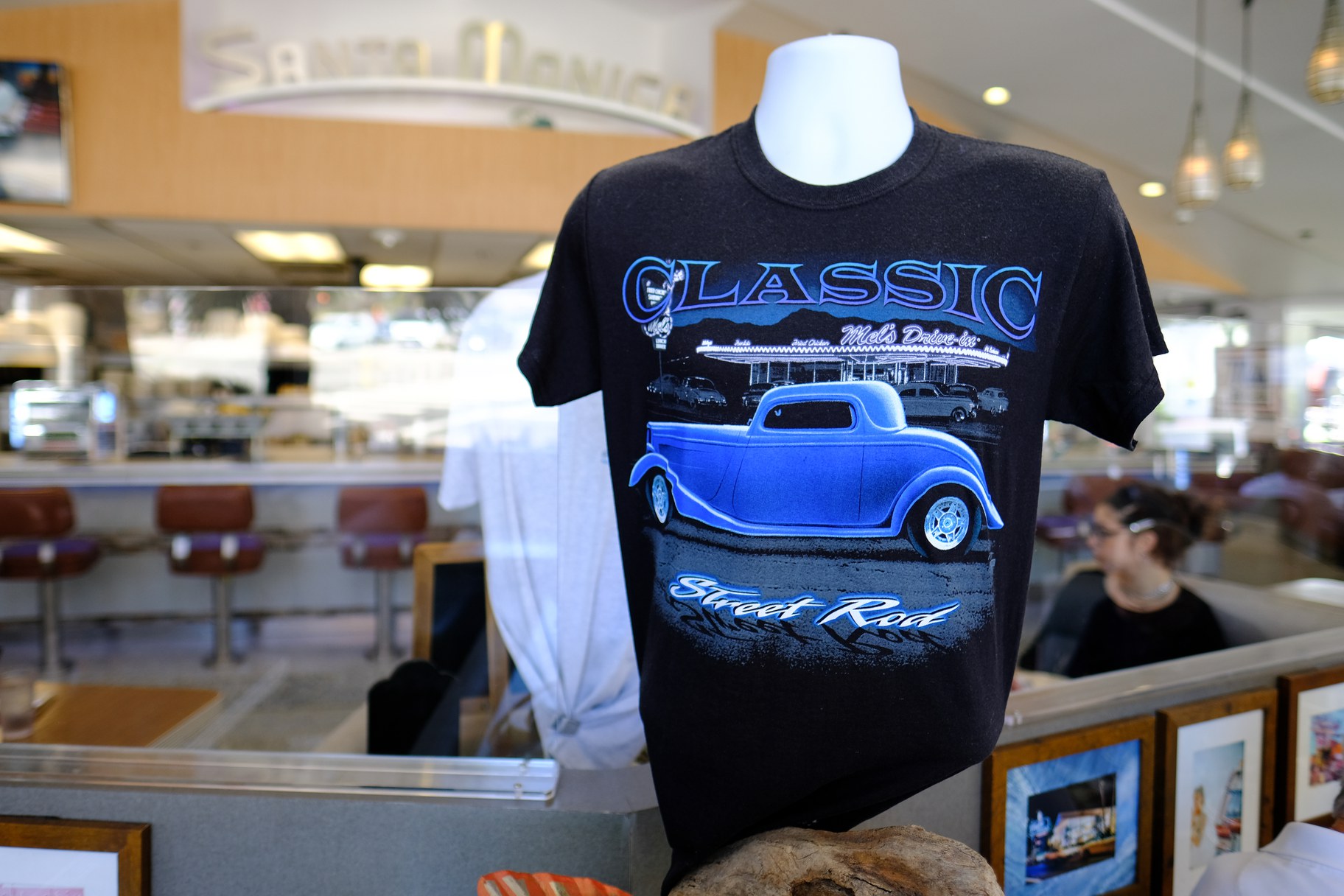 A t-shirt is on display that shows a car parked outside of Mel’s. Photo by Amy Ta.

However, this architecture didn’t win over everyone. Some architecture critics and historians thought Googie was not serious, and the idea was that you needed money (a house secluded in the hills) to enjoy a modern lifestyle, Hess explains.

“They [Googie-style buildings] were torn down. This is in the 70s and 80s into the 90s especially. They were considered unimportant…we lost a huge number of them at that time,” says Hess.

Murphy adds, “It's probably easy to shun something that has access for all. I think there's a bit of hierarchy when something is precious, and only a few people have access to it. … I think that over time, we've come full circle and realized the commercial genre of mid-century architecture, Googie, is just as beautiful as all those classics up on the hills that only a few people can see.” 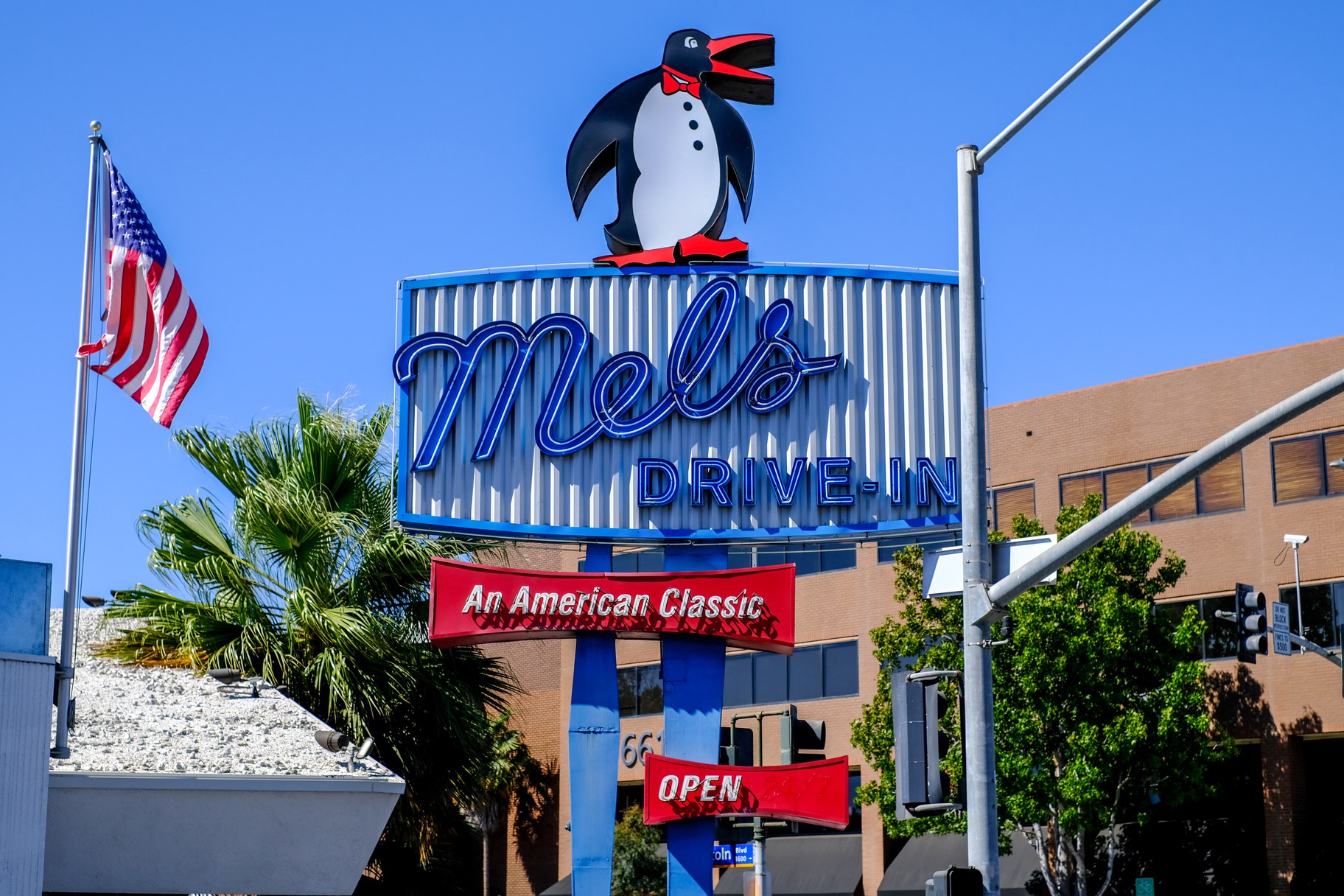 “Mel’s Drive-in: An American classic” is inscribed on a glass panel near the Lincoln Blvd. entrance of the restaurant. Photo by Amy Ta. 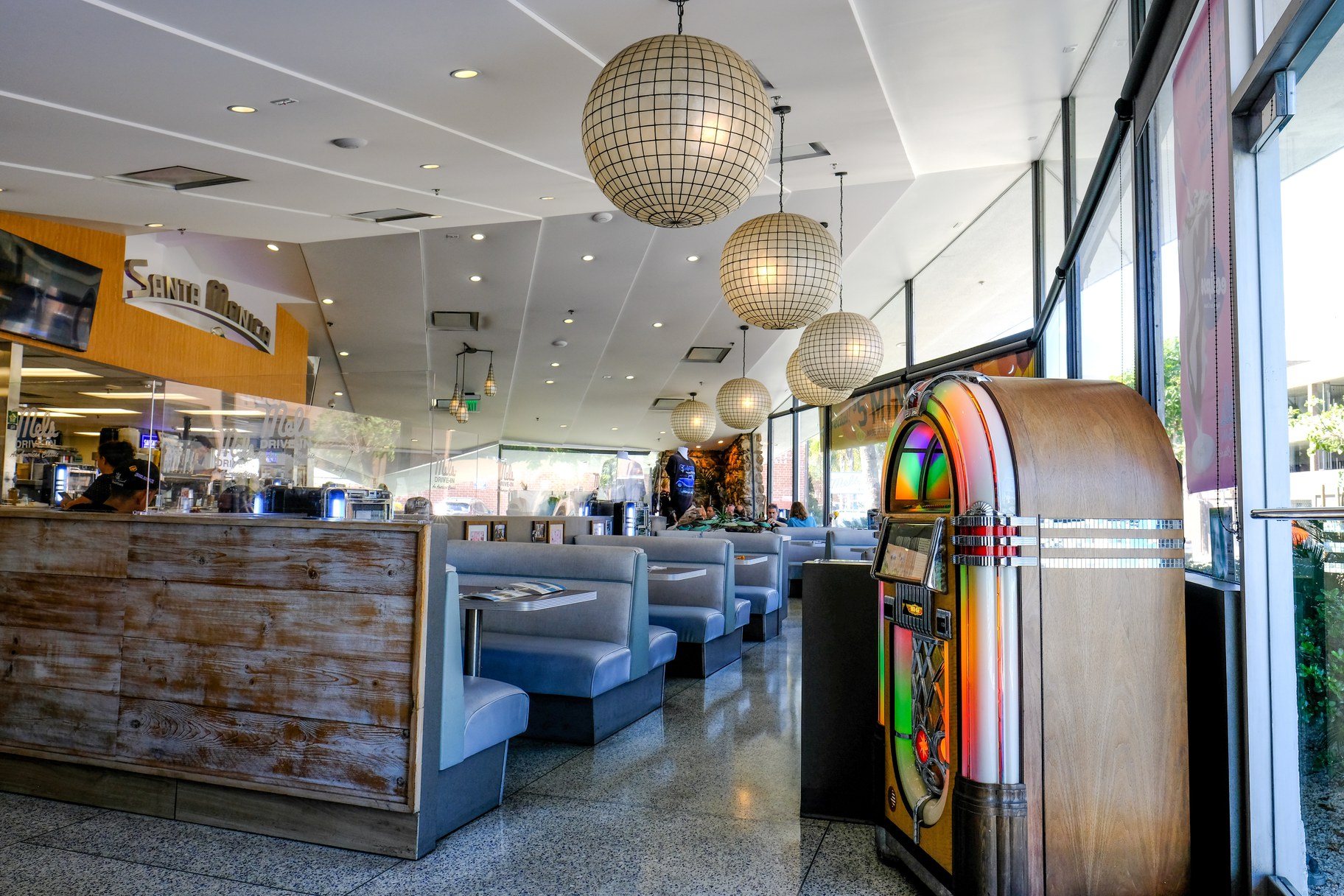 A jukebox sits by the Lincoln Blvd. entrance of Mel’s Drive-in Restaurant. Photo by Amy Ta. 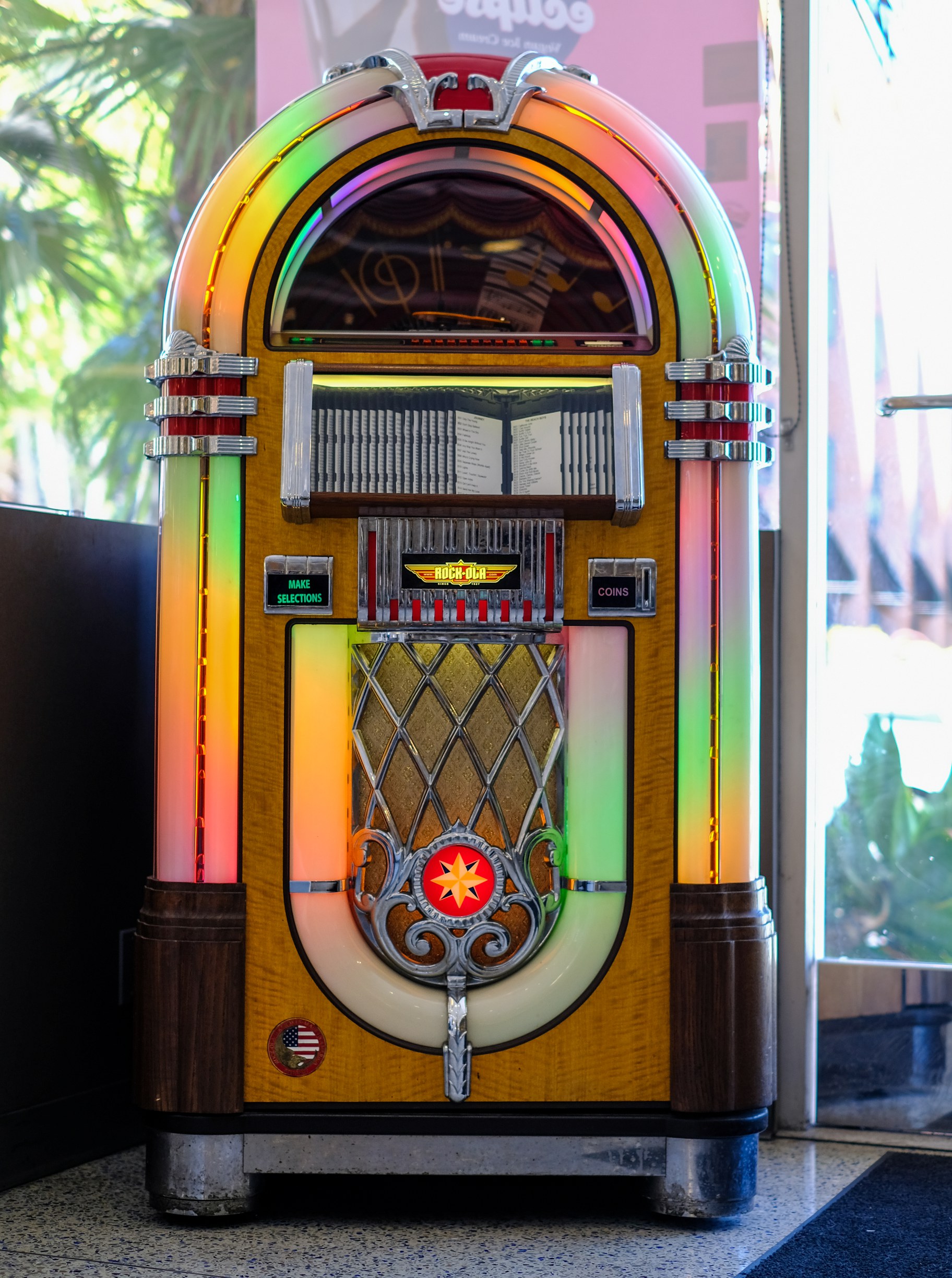 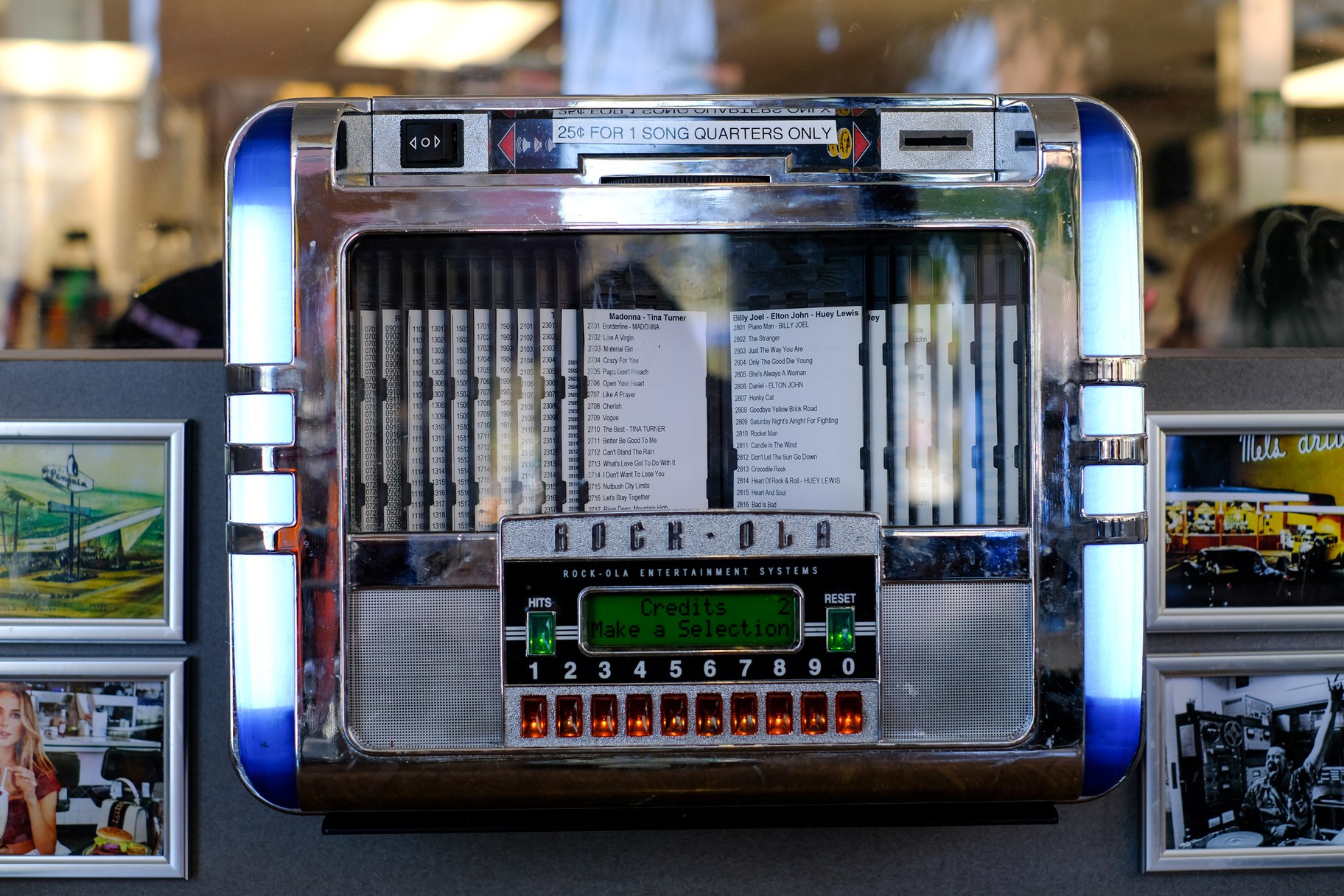 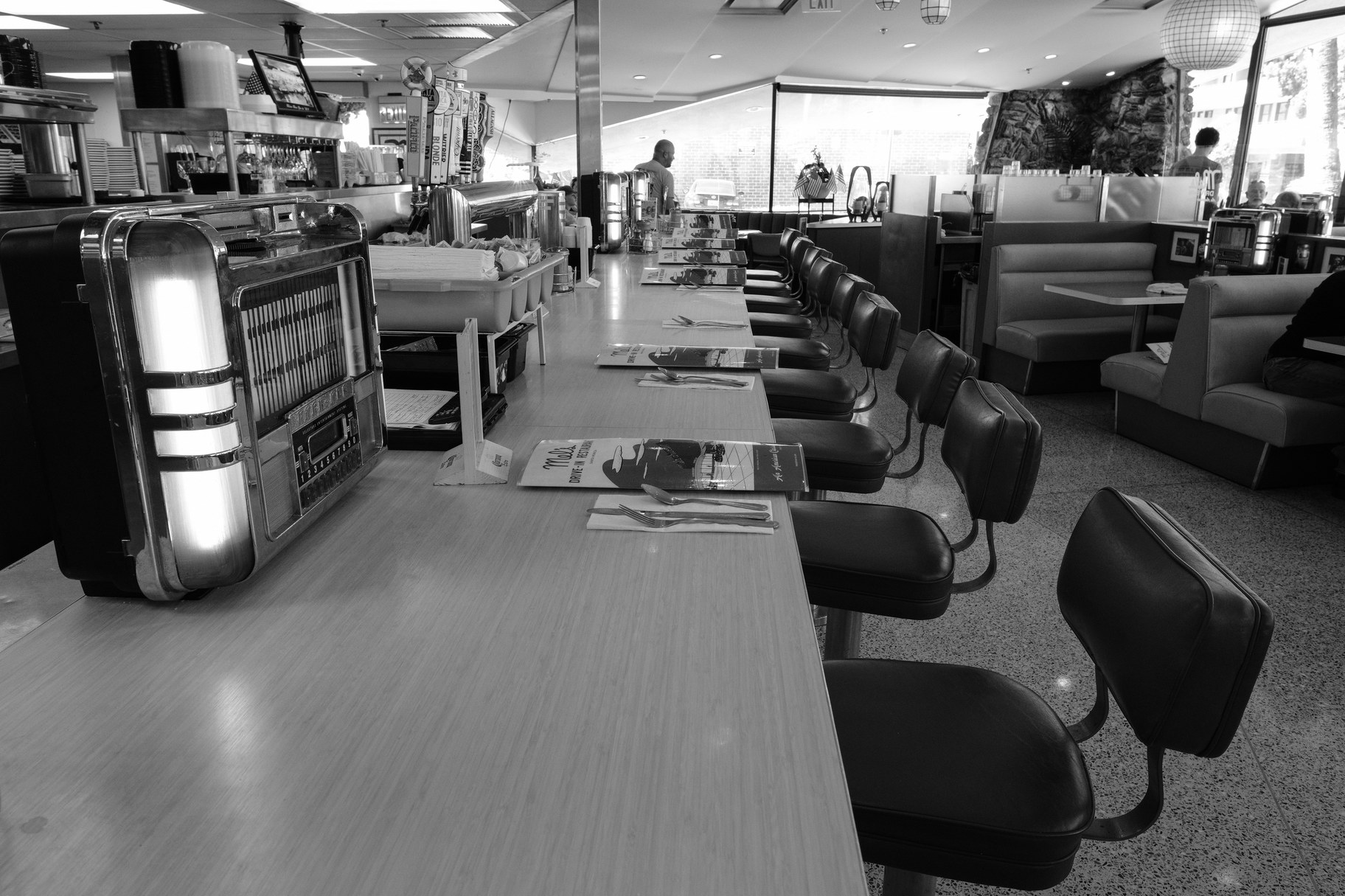 Customers who sit at the bar, rather than a booth, can play a song for 25 cents as well. Photo by Amy Ta. 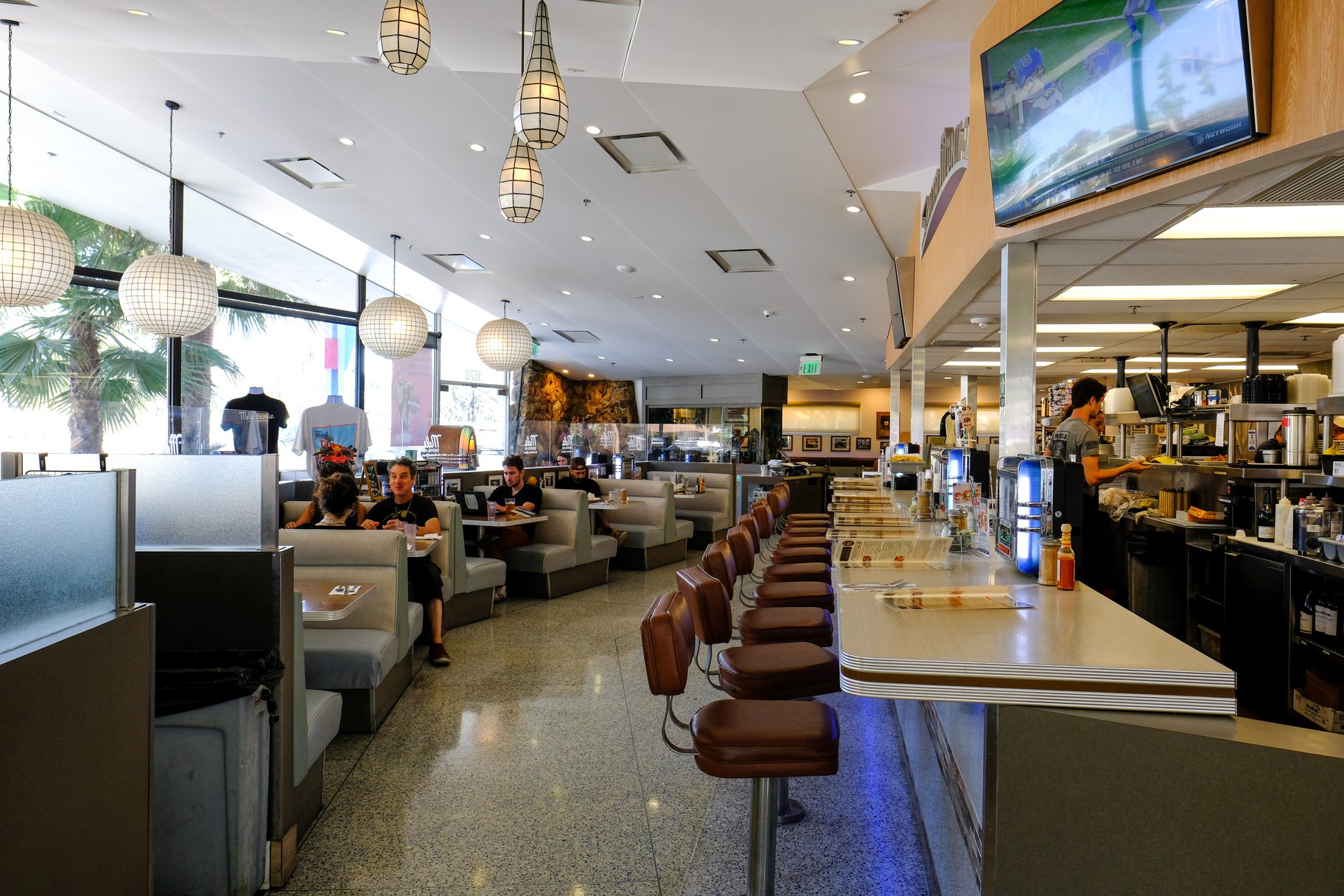 On a late Friday afternoon, diners sit at booths inside Mel’s restaurant. Photo by Amy Ta. 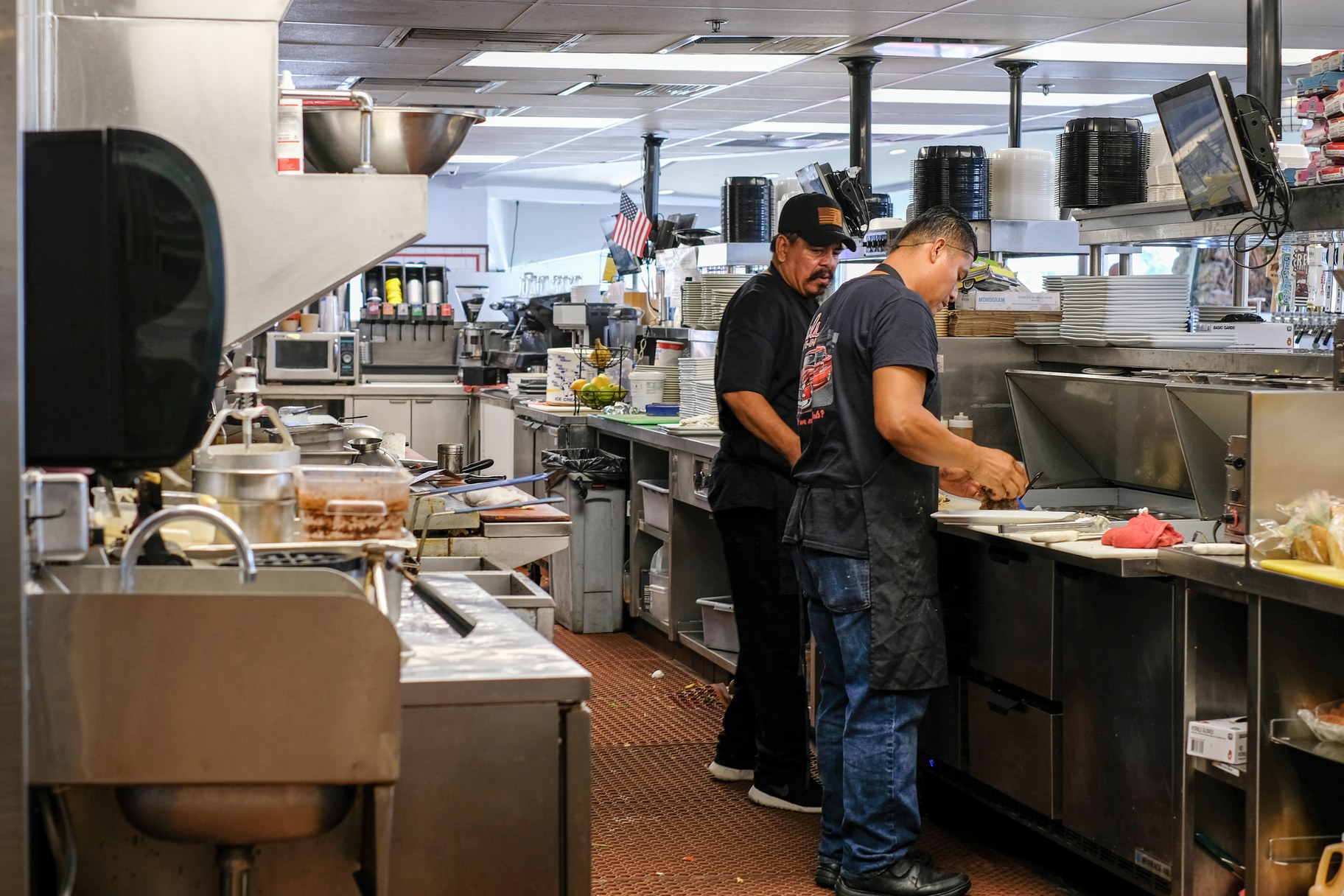 Cooks prepare meals in the kitchen. Photo by Amy Ta. 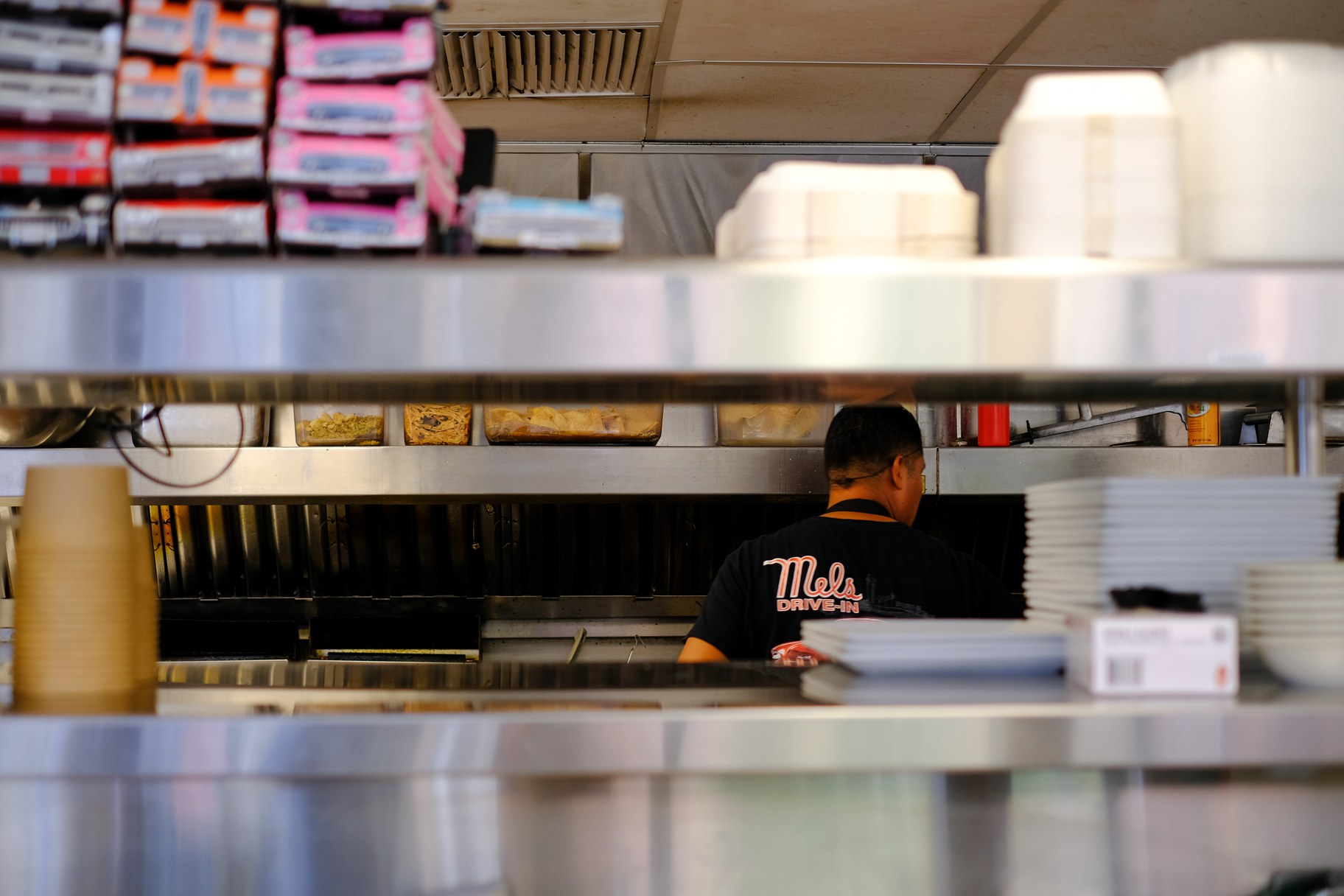 A man is seen cooking in the kitchen. Photo by Amy Ta. 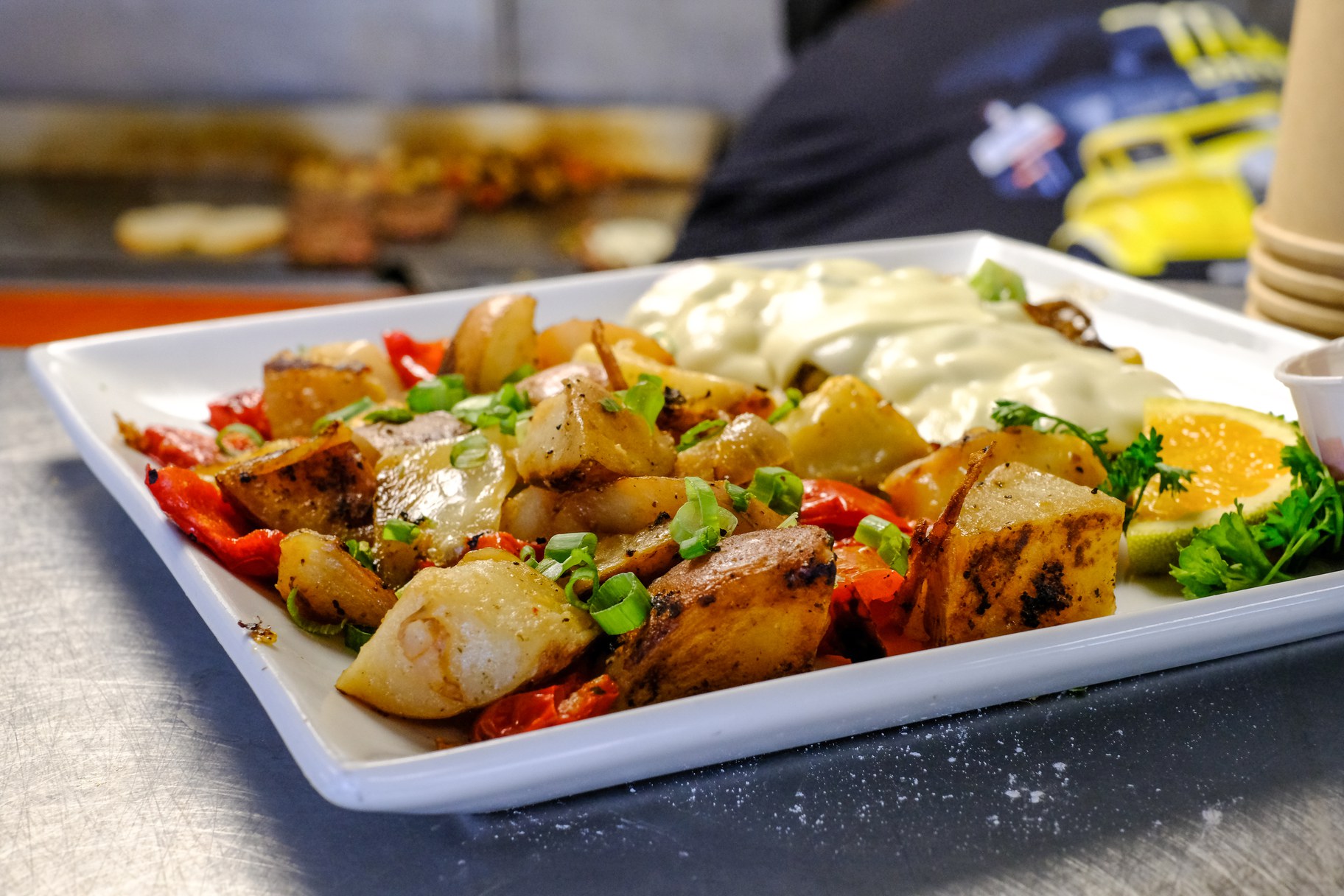 Potatoes with red bell peppers and herbs are ready to be served. Photo by Amy Ta. 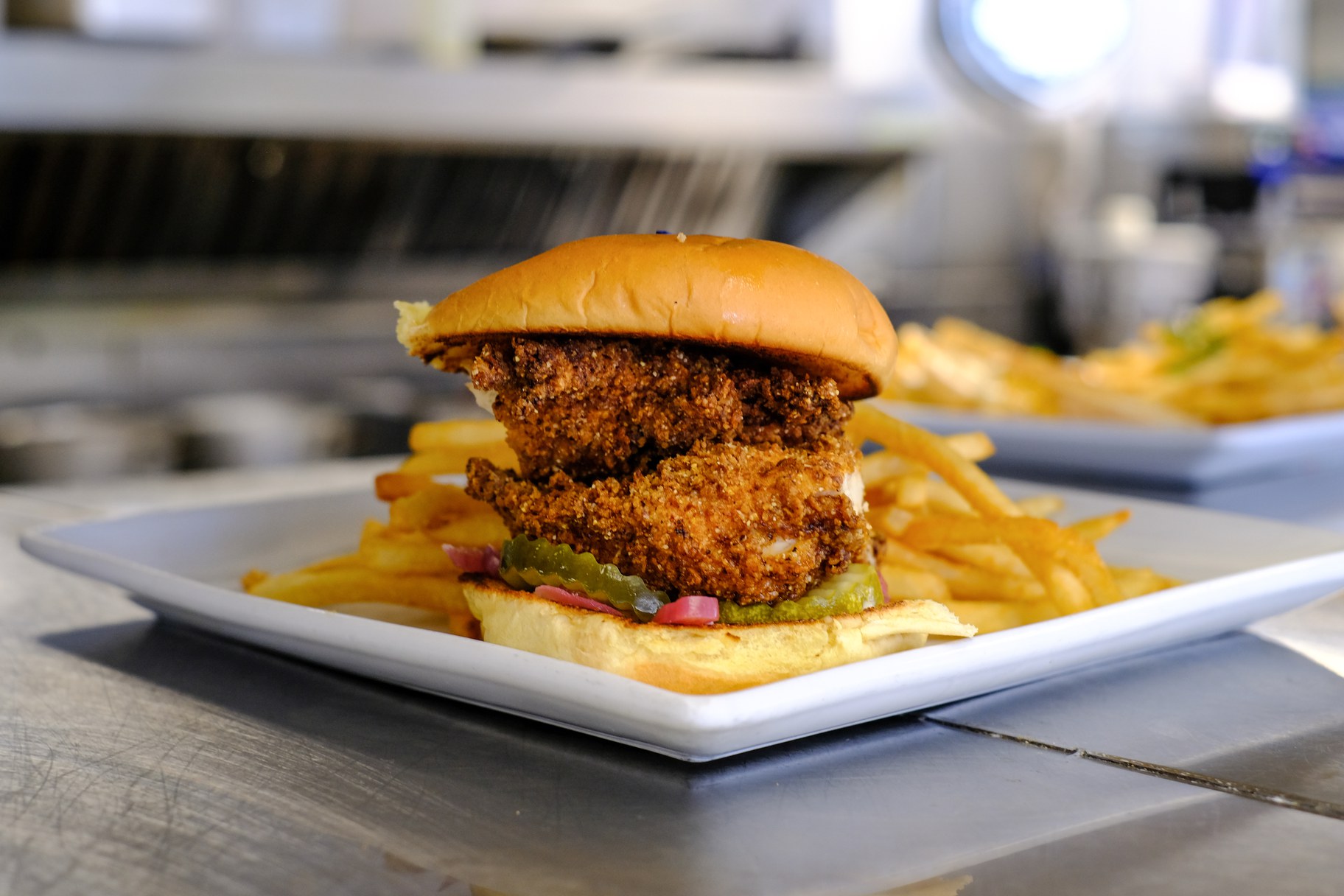 A burger and fries are ready to be served. Photo by Amy Ta. 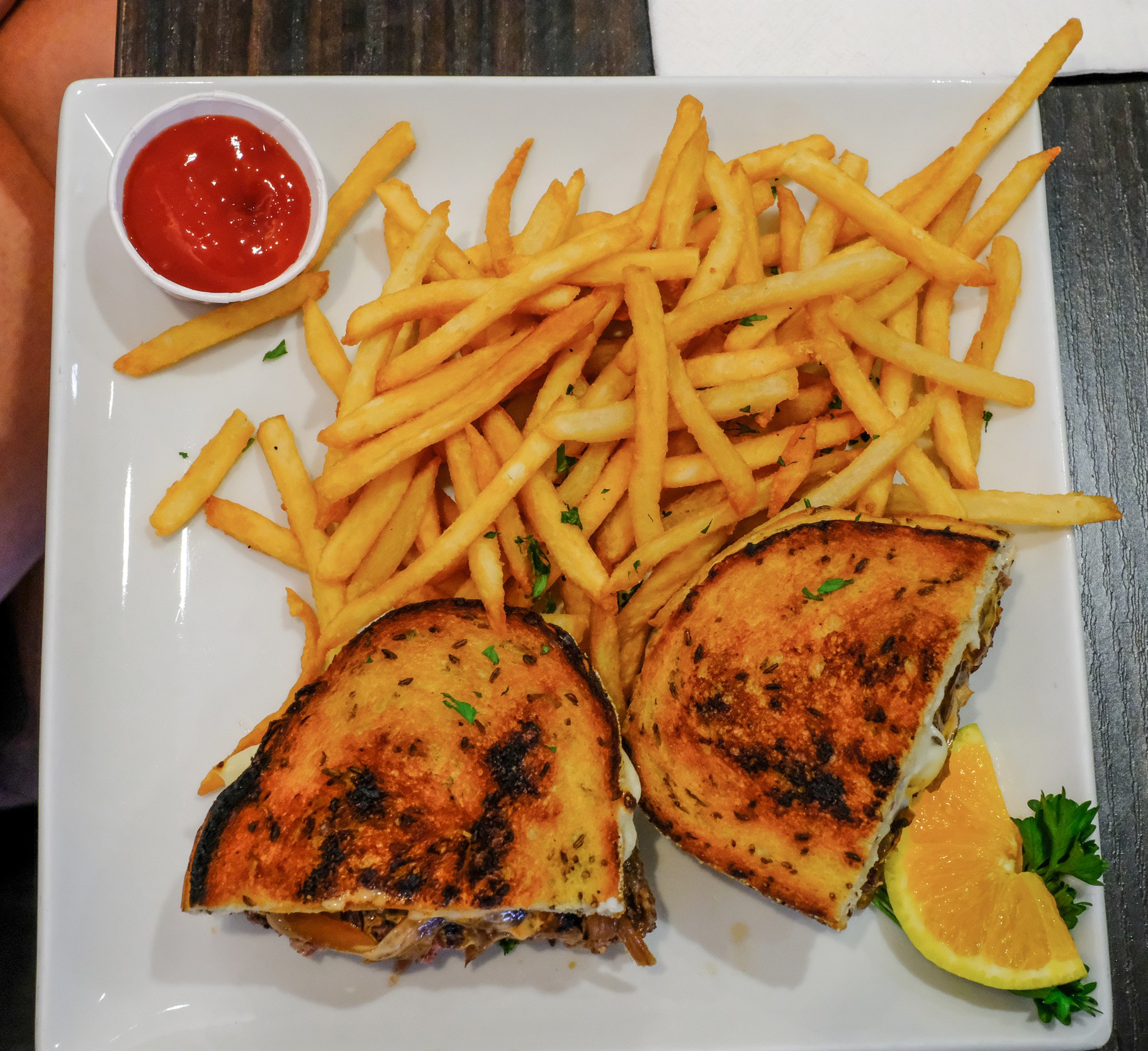 A plate of a sandwich, fries, and ketchup sit on a customer’s table. Photo by Amy Ta. 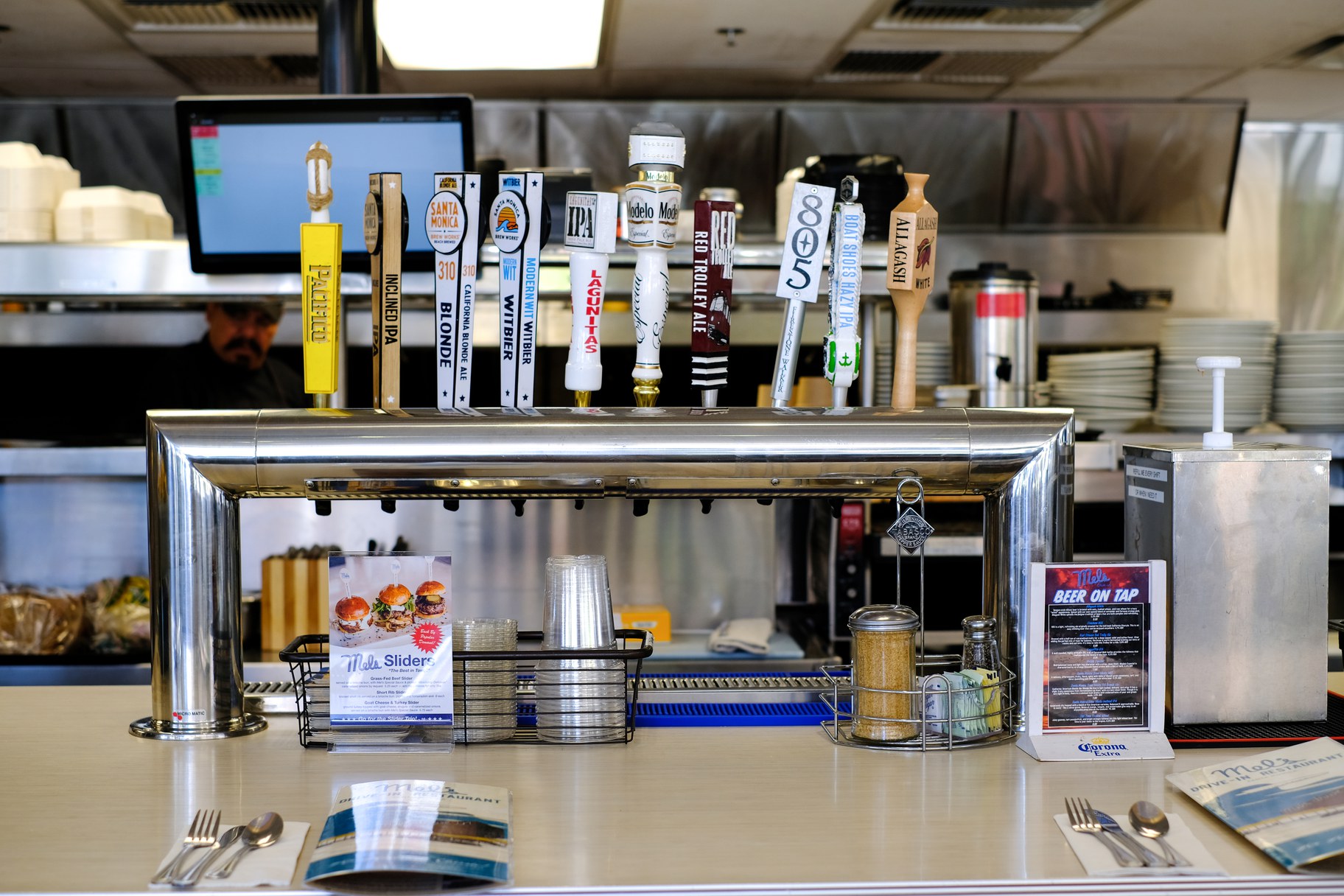 Beer is on tap at Mel’s. Photo by Amy Ta. 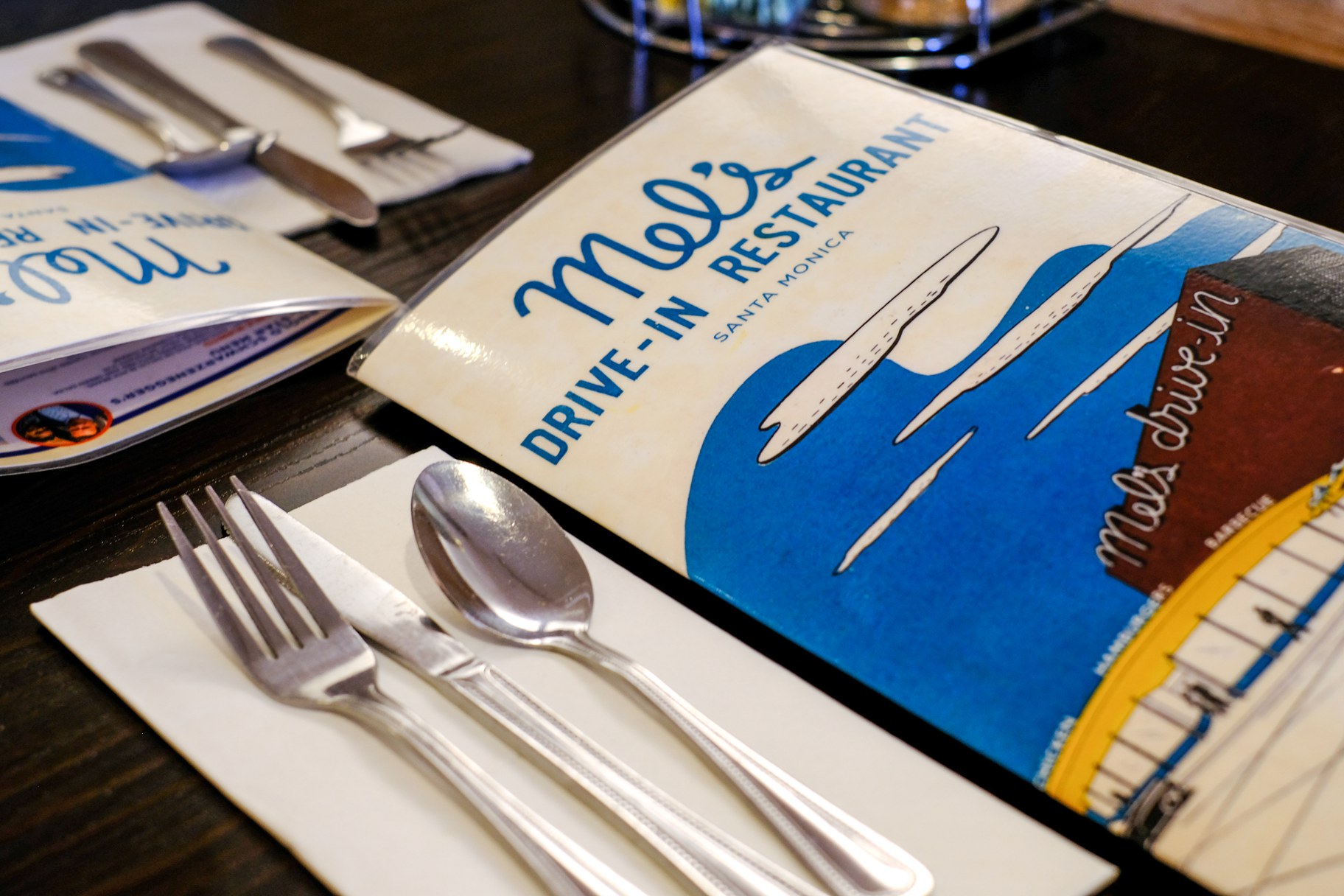 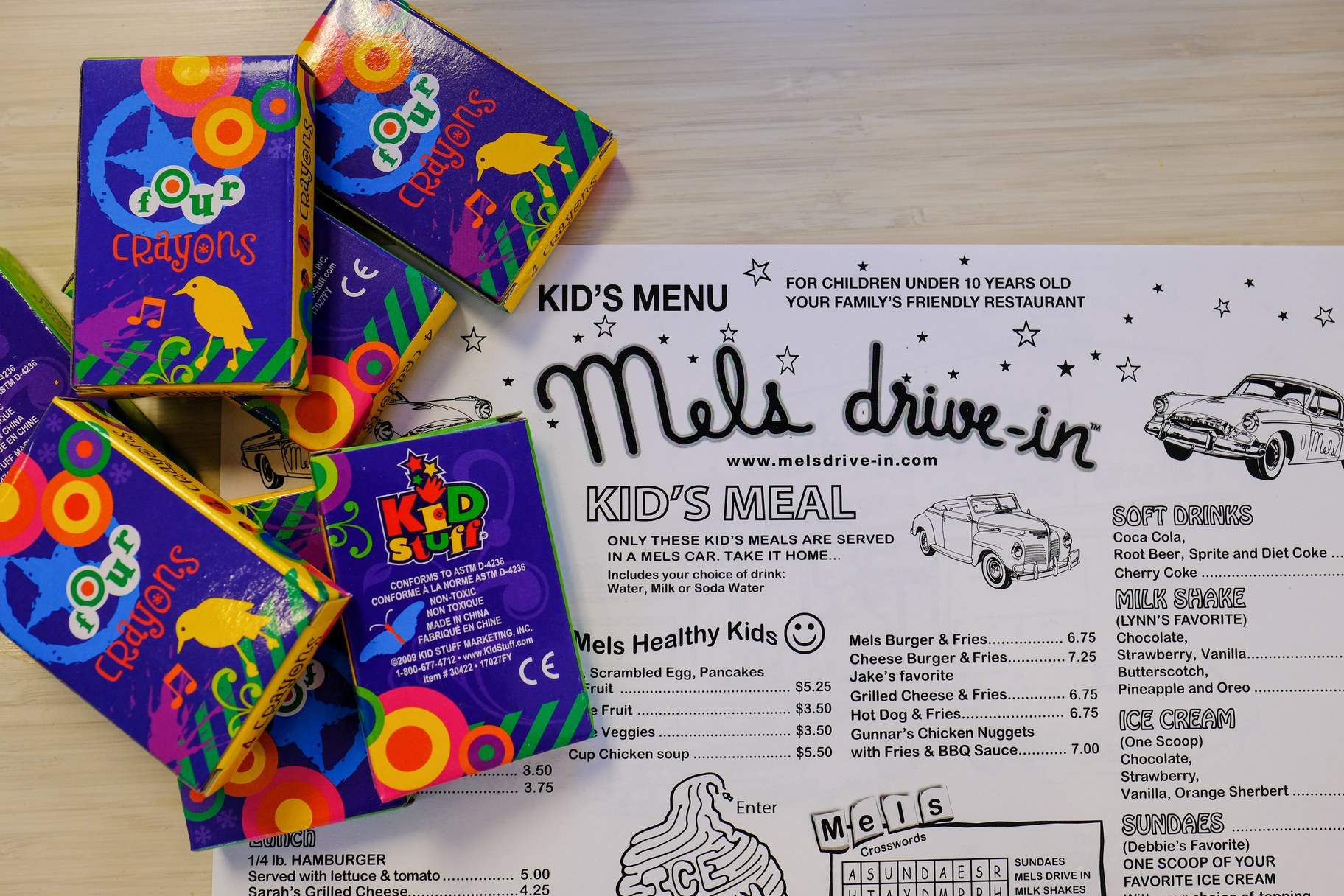 Kids get their own menu at Mel’s, plus crayons to make art. Photo by Amy Ta. 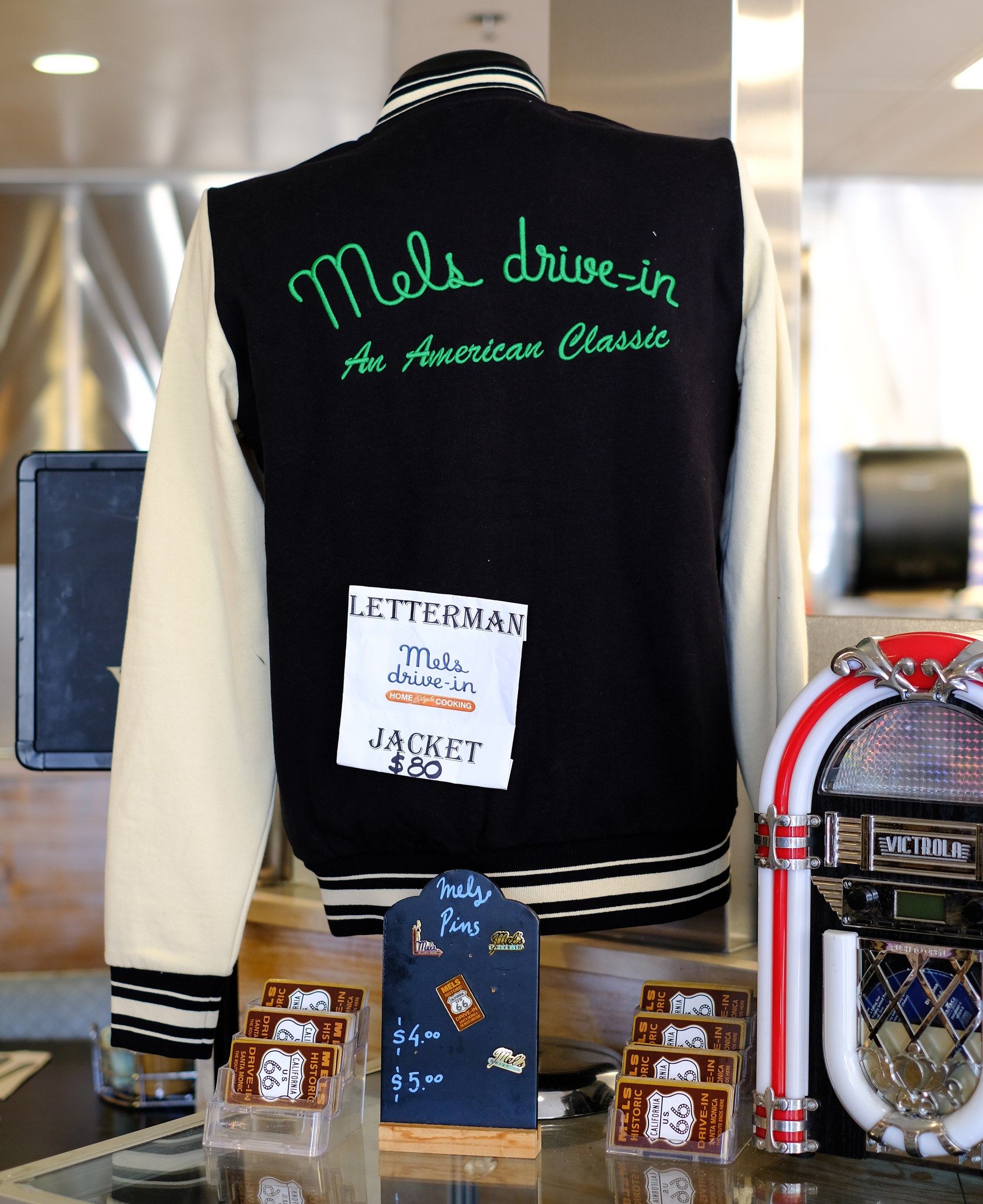 You can get this letterman jacket for $80 at Mel’s. Photo by Amy Ta. 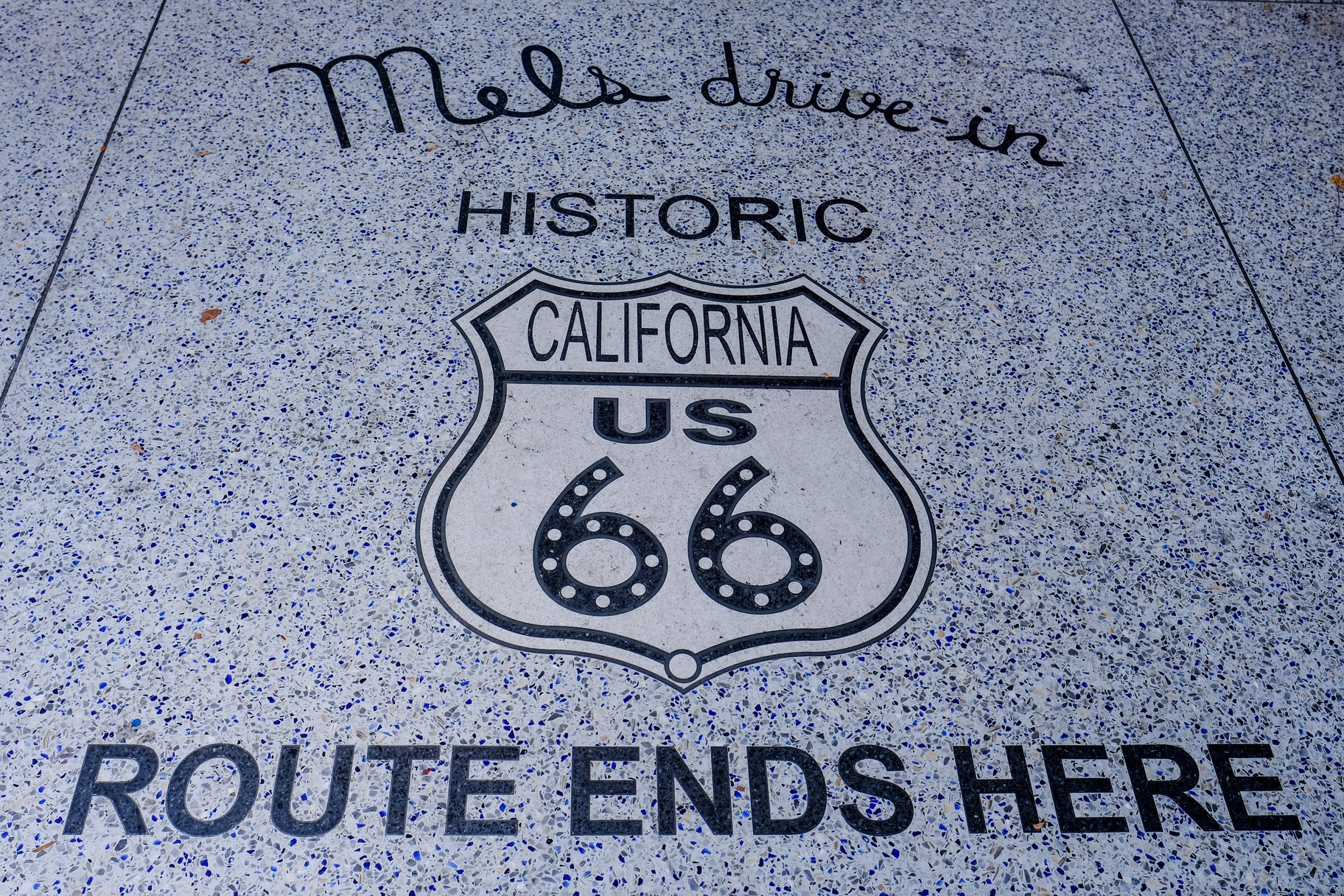 California’s historic Route 66 ends at the entrance of Mel’s Drive-in Restaurant, as these words on the ground indicate. Photo by Amy Ta.