At the California African American Museum (CAAM) right now, there’s an exhibition called “Enunciated Life.” It looks at Black spiritualism — in particular, Black Pentecostalism — as a source of vitality, creativity, movement, social life, and joy. That’s even in the face of racism and discrimination against Black people.

The contemporary artists included in the show, such as Shikeith, Billy Mark, and Tiona Nekkia McClodden, draw upon the choreography and sonics of possession found in Black spirituality. Featured works range from paintings to video to photography to installation. The abstract painting “Dancing Number 8” by Ashon T. Crawley, for example, whose scholarship on Black Pentecostalism helped inspire the exhibition, was created by people dancing in a circle with paint on their feet, mimicking the movement and embodied surrender that might be experienced in church. 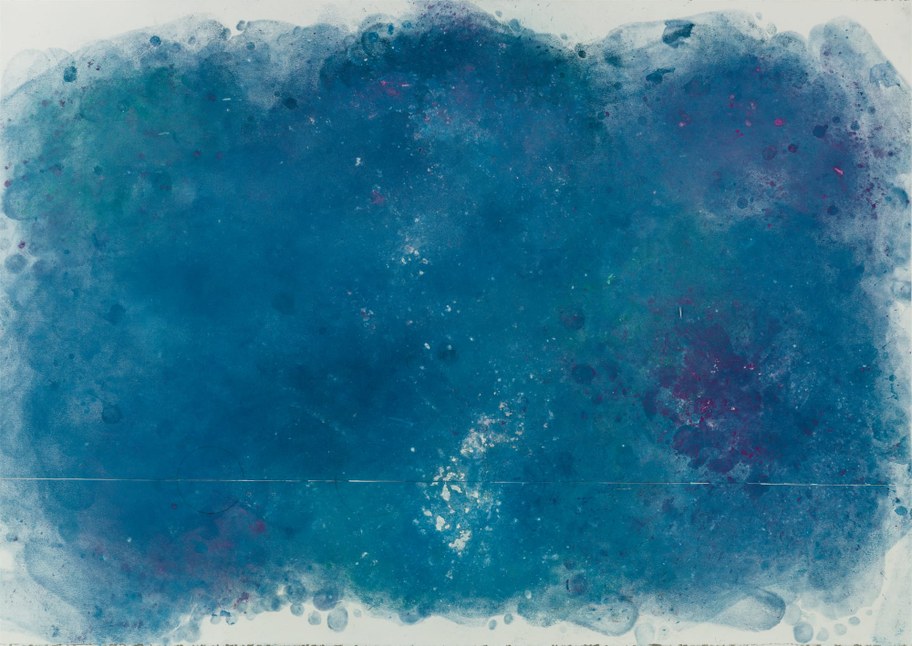 Ashton T. Crawley’s “Dancing Number 8” was created by people dancing in a circle with paint on their feet. Photo courtesy of CAAM.

With Crawley’s painting displayed behind them, Alridge explained that inspiration for “Enunciated Life” stemmed in part from a visit to an Orisha shrine in Trinidad and resistance she felt to the spiritual experience despite her upbringing in a Baptist Church.

“I felt this desire and this prompt to figure out how I could liberate my body more, to just be a little bit more free or a lot a bit more free, whether it be in a spiritual space on a dance floor, with friends, no matter what setting or scene,” she said. “From that, I've been thinking about the ways in which we can make ourselves vulnerable in these bodies, in particular these Black bodies, these brown bodies, and bodies of color, that are often marginalized or put at risk, due to white supremacy et cetera.”

From there, Aldrige began encountering and commissioning works that remarked on similar experiences, eventually gathering them into the collection that would become the exhibition.

“Particularly in the art world, but in general, I think we've seen a lot of images of black people in trauma,” Aldrige said. “I was really interested in thinking about the ways I could render Black joy and freedom through artwork and an exhibition and allow people to get a break from all of the trauma.”

Aldrige and Carmel, who DJed the event, also discussed the role of music in exploring those themes of freedom and spirituality, and the ties between the movement and bodily expression of Black Pentacostal practitioners and DJs playing to an ecstatic crowd.

“As a DJ, you can really feel it’s palpable when people are feeling free in their bodies and in their spirit, just from the music that you're playing and how you put it together,” Carmel told KCRW, reflecting on what she called an “Aha!” moment of the discussion. “It's the kind of energy that feeds back and forth between myself as a DJ and the people in the audience. And I would imagine, being a preacher, that that similar thing happens, where you feel the energy of the worshipers and then they make you get louder, and then everybody's dancing down the aisles by the end of the show.”

Amid LA’s homeless crisis, could vacant motels be a permanent solution?

On June 15, California and LA County will be completely reopened, meaning no more capacity limits and social distancing guidelines. It’s great news for restaurants that are...

At CAAM, an exhibition on view is “Enunciated Life.” It looks at Black spiritualism — in particular, Black Pentecostalism — as a source of vitality, creativity, movement,...