The Mayfair Hotel in Westlake is one of 16 hotels currently participating in Project Roomkey. Photo by Anna Scott.

One year ago, hotelier Rachel Gerstein was preparing for a busy season ahead.

“We had just renovated, had a brand new lobby,” said Gerstein, who owns the 48-room Shelter Hotel in Koreatown. Then the pandemic hit, and cancellations started rolling in. Gerstein read about Project Roomkey, a city-county program to temporarily place older and medically vulnerable people experiencing homelessness in empty hotel rooms to protect them from COVID-19. She contacted LA Mayor Eric Garcetti’s office to enroll.

“It was a win-win,” Gerstein said. “I could offer jobs back to my entire staff. It was fantastic.”

The Shelter Hotel operated as a Project Roomkey site until early December, when it closed as part of a months-long wind down of the program due to funding challenges.

But now, Gerstein says she’s in talks with city officials to re-enlist. The Biden administration’s promise of new federal funding for Project Roomkey has sent LA city and county government scrambling to ramp back up a program they’d planned to shutter by April 2021.

Under former President Donald Trump, the Federal Emergency Management Agency (FEMA) initially committed to reimbursing 75% of the room costs for Project Roomkey. By August 2020, however, it was unclear if that policy would continue.

They hope to take advantage of an executive order signed by President Joe Biden last month, directing FEMA to reimburse cities and counties for 100% of their spending on non-congregate shelters through September 2021. The problem is figuring out how to front the costs.

“In general it can take years for the federal government to reimburse eligible costs,” said Phil Ansell, director of LA County’s Homeless Initiative.

This week, LA County’s Board of Supervisors directed homelessness and budgeting staff to report back on possible options for re-expanding the program and potential revenue streams within 15 days.

On Thursday, the LA City Council’s Homelessness and Poverty Committee is scheduled to consider a similar motion. That motion, from councilmembers Mike Bonin and Nithya Raman, also asks for a report back from the city attorney on the possibility of commandeering hotel and motel rooms, something homeless advocates have called for since the start of the pandemic.

In the meantime, city and county officials are reportedly speaking to state leaders about Governor Gavin Newsom’s administration fronting the costs for expanding Project Roomkey, and then having FEMA reimburse the state.

City and county leaders have not announced any specific goals for the number of people they hope to serve through Project Roomkey between now and September. One consideration will be the number of people they are equipped to provide social services and housing assistance to, with the help of various nonprofits that contract to run Project Roomkey sites.

Ideally, the program is supposed to serve as a bridge between the streets and permanent housing. But LA’s lack of permanent, affordable housing has been a challenge.

According to LAHSA, the vast majority of the 1,454 people who have exited Project Roomkey since September — about 70% — have gone to other forms of temporary, or interim, housing. The agency was unable to provide exit data for the program as a whole before KCRW’s deadline. 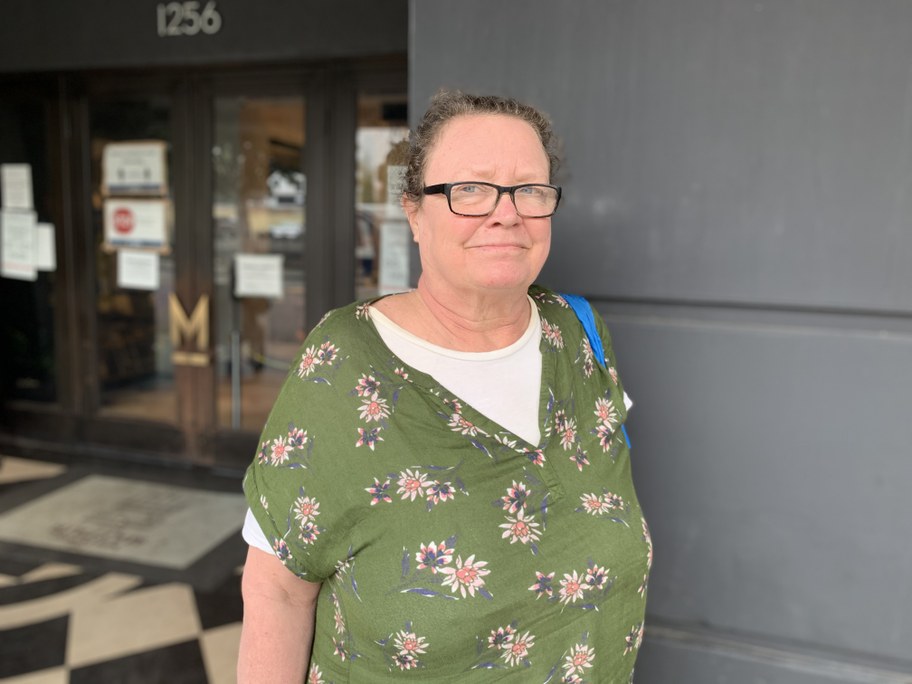 Christine Curtiss has been in Project Roomkey since the spring. She currently stays at the Mayfair Hotel in Westlake. Photo by Anna Scott.

One person currently waiting to exit Project Roomkey is Christine Curtiss. (She’s also the subject of KCRW’s podcast series “Samaritans.”) Near the start of the pandemic, she moved from a group shelter for women in Hollywood to the Shelter Hotel in Koreatown, owned by Gerstein. When the Shelter Hotel closed, Curtiss moved to another Project Rookmey site at the Mayfair Hotel in Westlake, even though she was matched to permanent housing more than eight months ago.

“The more time that goes by, the more depressing it is, frankly,” she said. “It feels like it's never going to happen.”

One year ago, hotelier Rachel Gerstein was preparing for a busy season ahead.