California’s Homekey program moves people experiencing homelessness into old motel properties. It’s a new start for many of them, but it’s not permanent. Graphic by Mike Royer from photos by Saul Gonzalez.

The Willow Tree Inn in Compton looks like any number of motels throughout Southern California. Flanked by a freeway and a drive-through Starbucks, it’s a no-frills, two story structure with rooms facing a central courtyard. But the Willow Tree doesn’t offer overnight lodging anymore. Instead, it’s part of Homekey, an ambitious statewide program to convert hotels, motels, and other properties into housing for people experiencing homelessness.

Omar Molina, 55, moved into a room at the Willow Tree in May, and says he’s grateful for the stability it provides. The building offers meals and has a medical office on-site, as well as case managers, exercise classes, and other services. “I can relax, I can take a deep breath, and I can exhale,” Molina says.

Before coming here, he camped in a parking lot in the San Fernando Valley for several months. Unlike a traditional group shelter, Molina says, his room at the Willow Tree gives him privacy and a strong sense of security. Still, it’s not a permanent home — at least not yet. 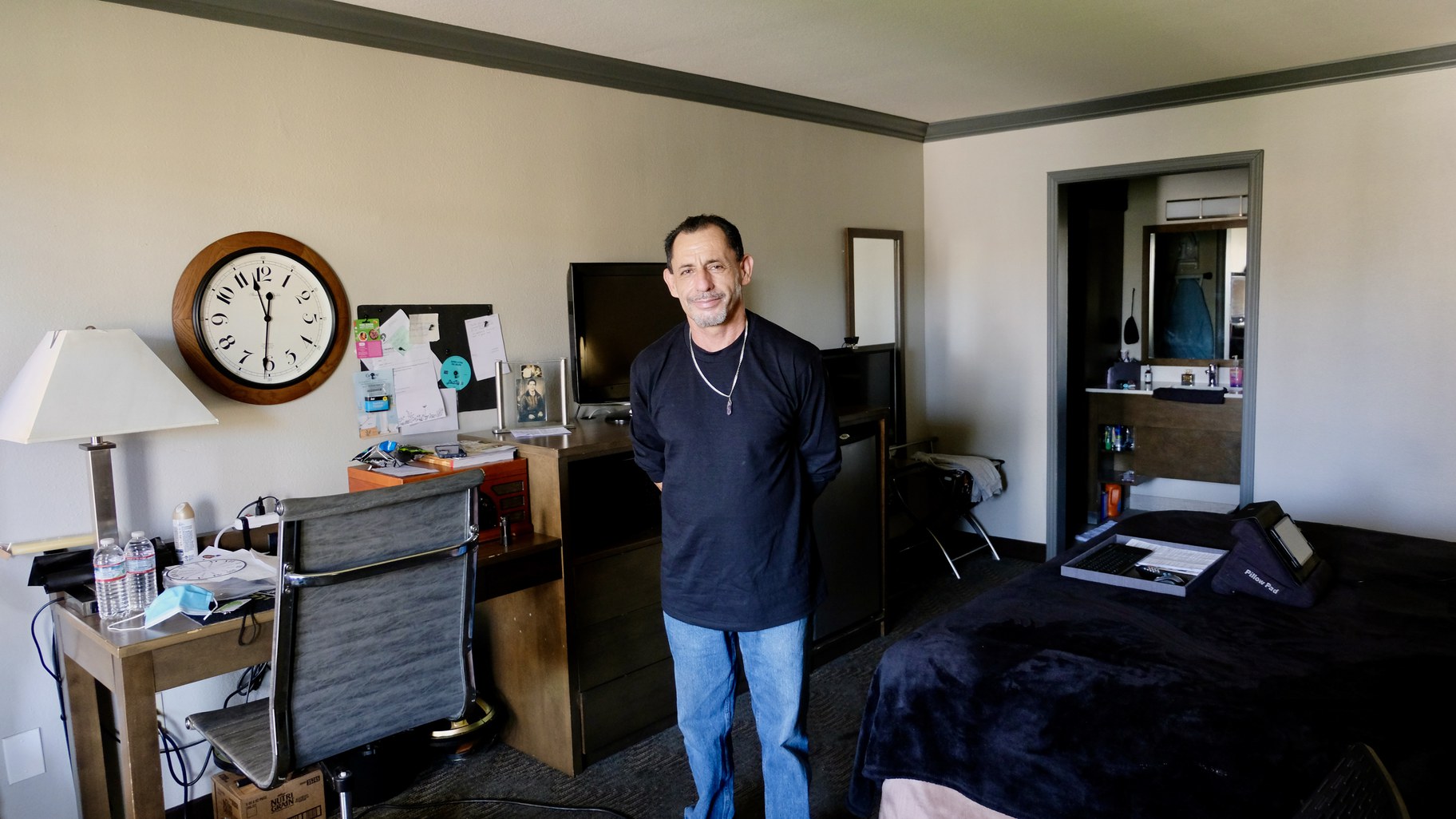 Omar Molina stands in his room at the Willow Tree Inn in Compton. The state Homekey program gave him shelter in this converted motel, but it’s not long-term. Photo by Saul Gonzalez.

Starting last year, Governor Gavin Newsom allocated $846 million to cities and counties as part of Homekey. Municipalities used the money to buy existing buildings, mostly hotels and motels, that could quickly accommodate residents who were previously unhoused. While the ultimate goal is to turn these properties into permanent housing, many need renovations to meet accessibility standards and other requirements before they can accommodate long-term tenants. In the meantime, buildings like the Willow Tree Inn are operating as interim housing.

The Willow Tree is one of 37 Homekey sites in LA County. All sites together have a total of 2,533 units, according to the county’s latest numbers, from July. At the time, five of those sites were already serving as permanent, supportive housing, while 32 were interim.

The Willow Tree needs an estimated $14.3 million in renovations to transform its rooms into studio apartments, according to The People Concern, the nonprofit that operates the site. The county is expected to cover that cost using American Rescue Plan dollars, and start work in April. The renovation could take up to 10 months. If residents like Molina are still there when construction begins, The People Concern will relocate them to other facilities, says John Maceri, the organization’s CEO. Other Homekey sites in LA County will be renovated on a rolling basis through next year.

For now, even if the rooms aren’t permanent, offering an individual living space is a huge help in drawing people indoors, says Maceri. “People who have lived on the streets want the same things that all of us want,” he says. “They want privacy, they want dignity, they want some sense of control over their life.”

“Being here, it means a place of starting over, getting another chance,” he says. “It's given me a place to regroup, to rebuild my foundation, and just basically help myself be able to help somebody else eventually. That's my goal.”

State officials recently opened the application period for another $1.4 billion of Homekey funding.