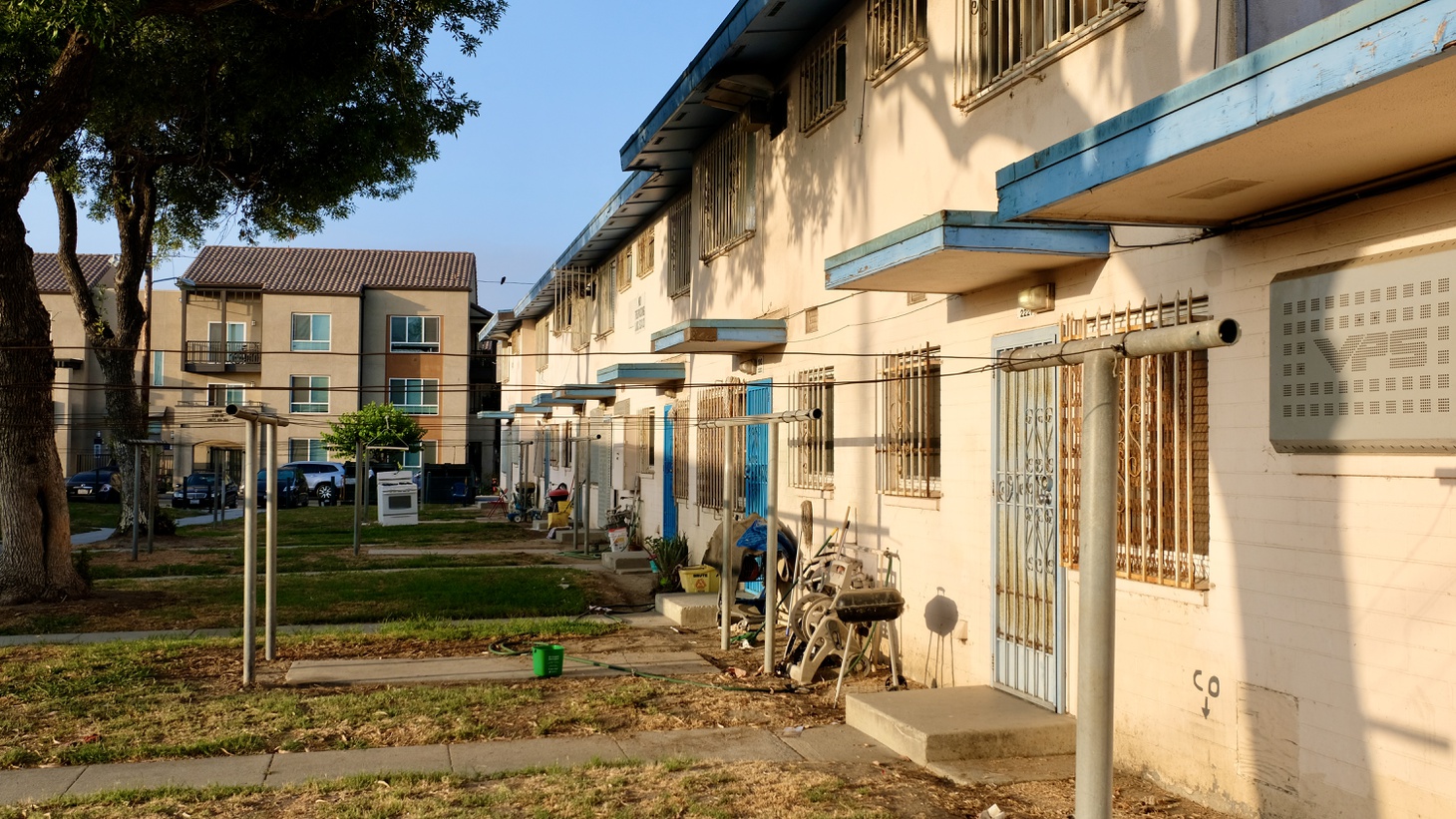 Old Jordan Downs housing, dating back to the 1940s and 50s, stand next to new apartment units that are part of redevelopment in the background. Photo by Saul Gonzalez

After more than 20 years of planning and construction, one of LA’s biggest public housing projects is in the midst of a $1 billion redevelopment makeover, the largest such project in the city’s history. The redevelopment of the Jordan Downs housing project will more than double its size from 700 to 1,500 units, and is also expected to add an array of community amenities and public spaces, improve the lives of Jordan Downs residents, and show what decent public housing could be.

Just how dramatic and unusual are the changes happening at Jordan Downs for the people who live there?

Let Rick Chilton, a third-generation Jordan Downs resident tell you, as he watched workers build new apartments in the middle of this sprawling public housing complex one recent morning.

“We’re like, ‘Damn, we can’t believe this is happening.’ I would never think in my wildest dreams that they would be tearing down the projects,” says Chilton, pointing to the new construction.

There are 14 public housing projects in Los Angeles, housing nearly 20,000 residents, many of them the poorest people in the city.

Mostly Black and Latino, public housing residents can be fiercely loyal to where they live. They’ve also built bonds of community and friendship over the decades, in such places as Imperial Courts and Nickerson Gardens in Watts and Pueblo del Rio in South Central. But when public housing does make the news, it’s often about drug busts, police crackdowns, and gang violence.

Now in slow stages, the City of Los Angeles and two nonprofit developers are tearing down the old Jordan Downs, destroying row after row of decaying, barracks-style housing units dating back to the 1940s. Bars are over every single window of the apartments and big “No Trespassing Signs” are on every building. 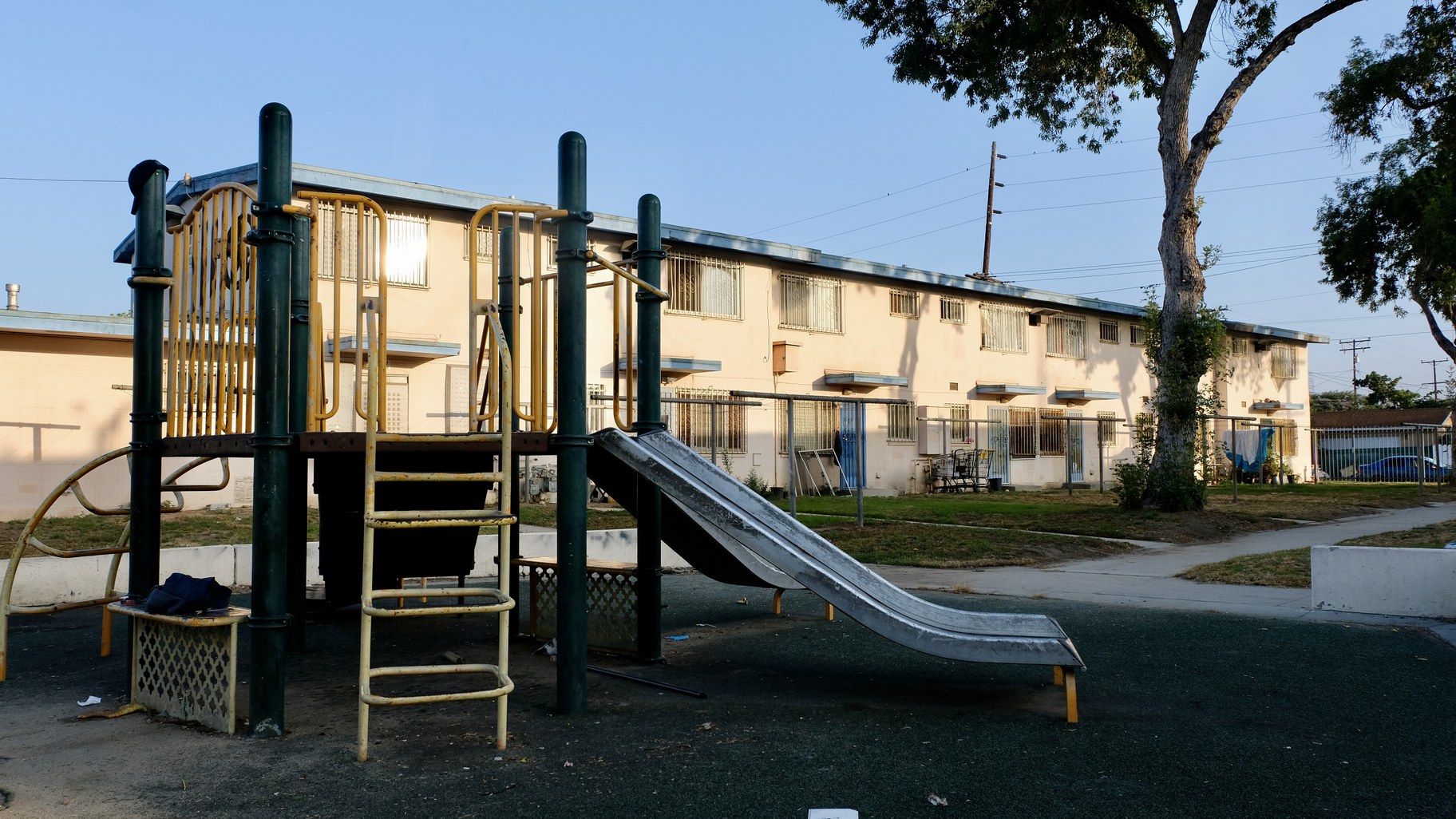 Jordan Downs apartment buildings were originally used to house workers during World War II and were converted to public housing. Like other housing projects, generations of families have lived at Jordan Downs. Photo by Saul Gonzalez.

In their place, the new Jordan Downs features townhouse-style apartment buildings painted in warm earth tones, with small patios on the first floor and balconies on the floors above. None of the windows have bars over them. 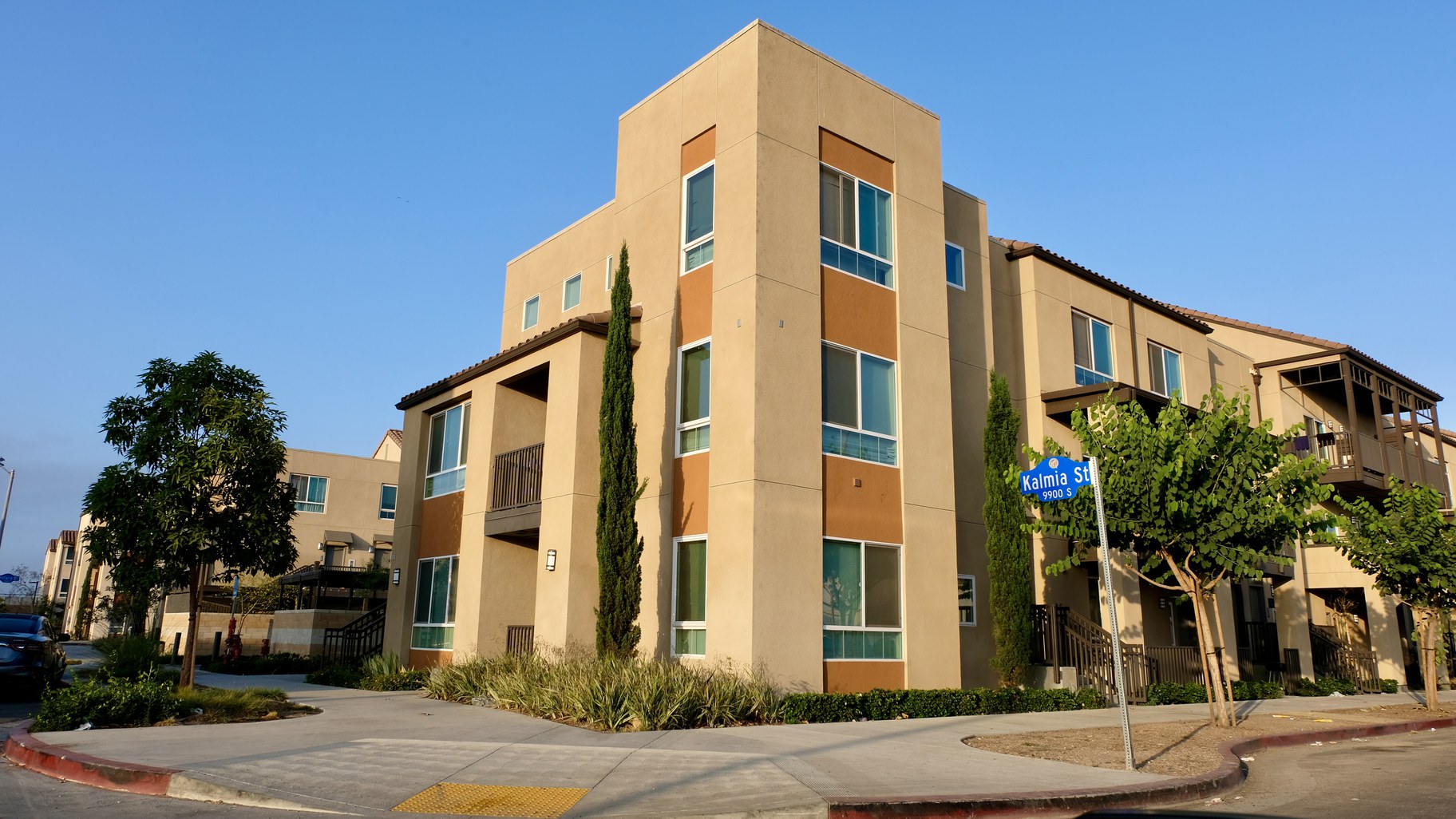 Developers say they want to create an urban village atmosphere in the new Jordan Downs housing units. Unlike the old buildings, the new apartments come with central heat and air conditioning and washer and dryer units. Photo by Saul Gonzalez.

The new Jordan Downs looks and feels like a suburban apartment complex in Orange County and not public housing in Watts.

“Oh, yes, I remember like yesterday,” says Perkins sitting in her living room. “It was really exciting. I couldn't even sleep at night. It was just awesome. I kept walking around the house, I was eager to decorate.” 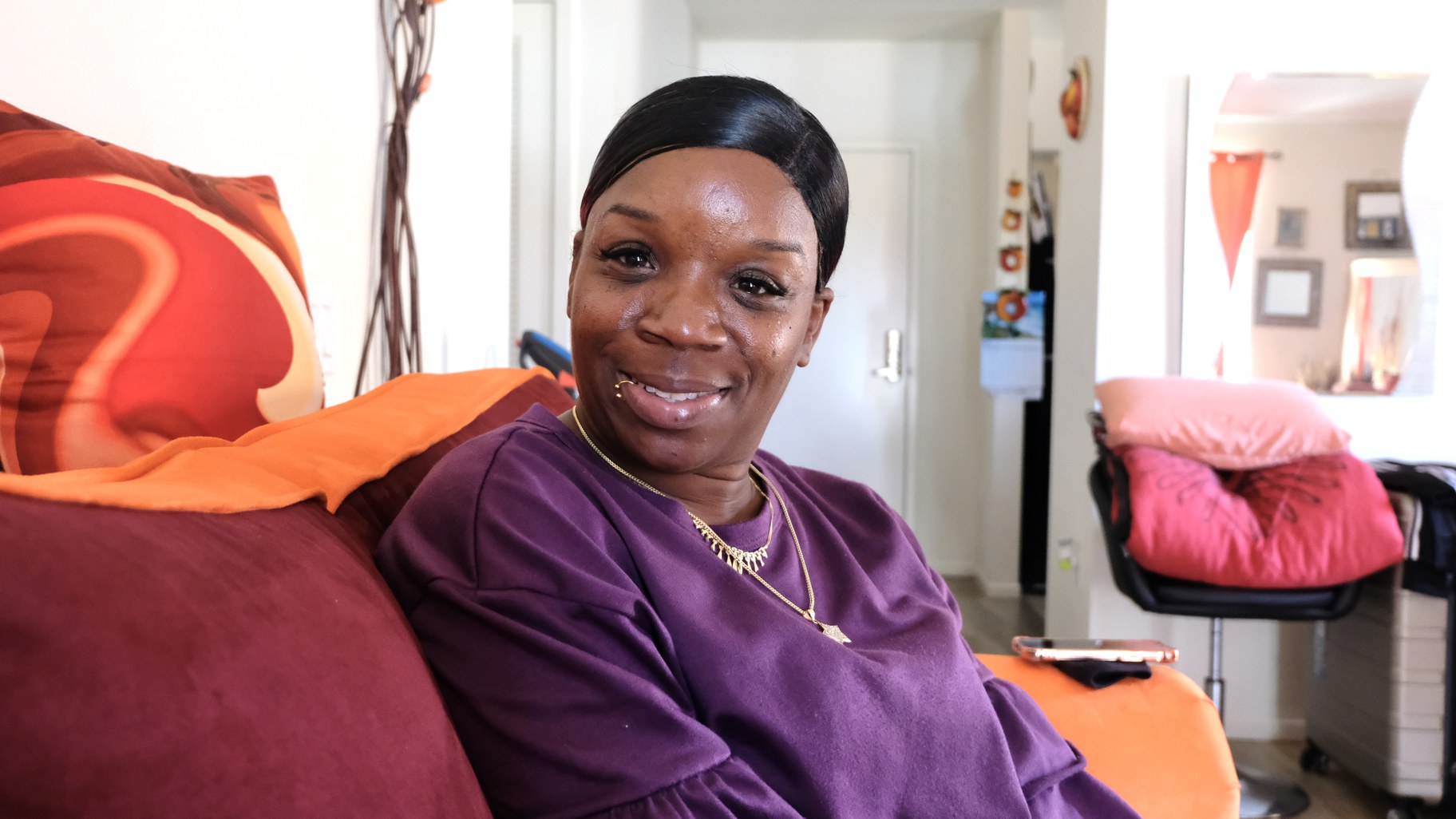 Jordan Downs resident Shankita Perkins was one of the first people to move into new housing as part of redevelopment of the public housing complex. Photo by Saul Gonzalez.

But the changes at Jordan Downs go far beyond new apartments.

In a part of LA that’s often been described as a retail desert, here Jordan Downs residents and the wider community can find a supermarket, bank, clothing stores, restaurants, and the only Starbucks in Watts. Many who work in the businesses live at Jordan Downs.

Watts resident Sherry Edison says the shopping center is something people have wanted for decades, a place to get the essentials so they don’t have to leave their community.

“It’s closer to me where I live instead of having to go out of the area,” says Edison as she finishes up her shopping for the day. “I’m very pleased with this mall.”

And looking ahead, a new community center and nine acres of green space are planned for Jordan Downs as part of the project’s expansion.

In that era, public housing projects were described in glowing utopian terms. In one promotional short film, an announcer describes them as “cities within cities, scientifically planned and built, where a man and his family with a small income can live with comfort and dignity.”

But the image, and reality, of public housing quickly changed.

Physical conditions and safety deteriorated, and the projects were excoriated as a way to warehouse and segregate poor people of color away from white neighborhoods. They became synonymous with crime and despair in city after city.

In a 1982 PBS documentary, one elderly Chicago public housing resident described the fear outsiders had of the projects. “I think if I wasn’t living in the project, I’d be afraid of coming on up here too,” she said. 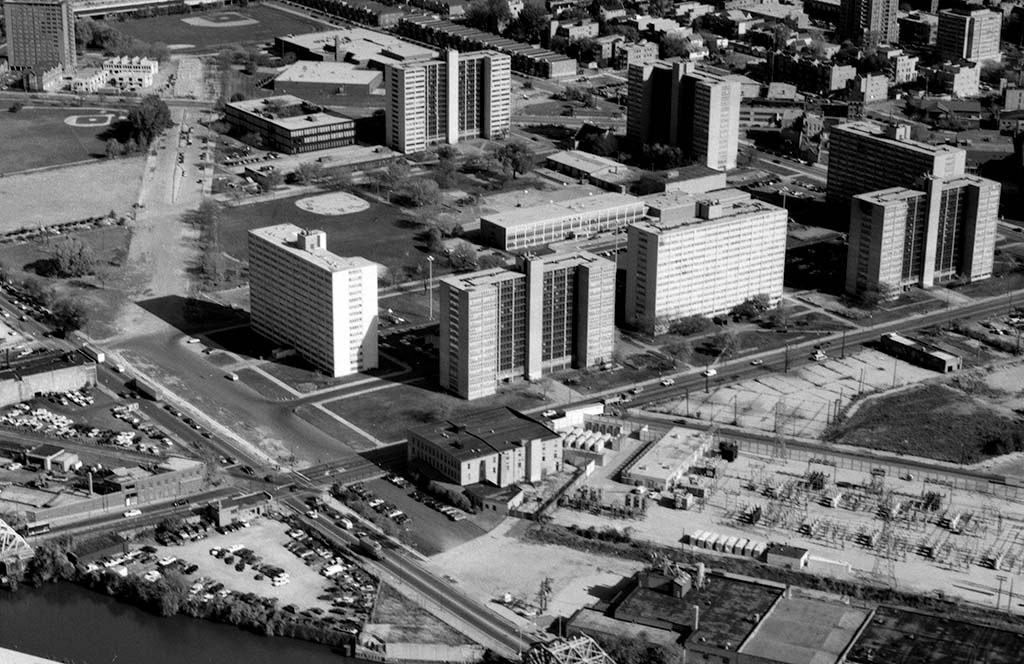 An aerial of Chicago’s Cabrini Green housing projects in the 1980s. Chicago, like other cities, has demolished much of its decaying and post-war public housing projects to make way for mixed-used development for a variety of incomes. There are criticisms, though, that thousands of poor residents have been permanently displaced. Photo courtesy of Library of Congress.

Political support for public housing dwindled. And in 1998, Congress even passed a law capping the number of new public housing units that could be built in cities. That law is still on the books. 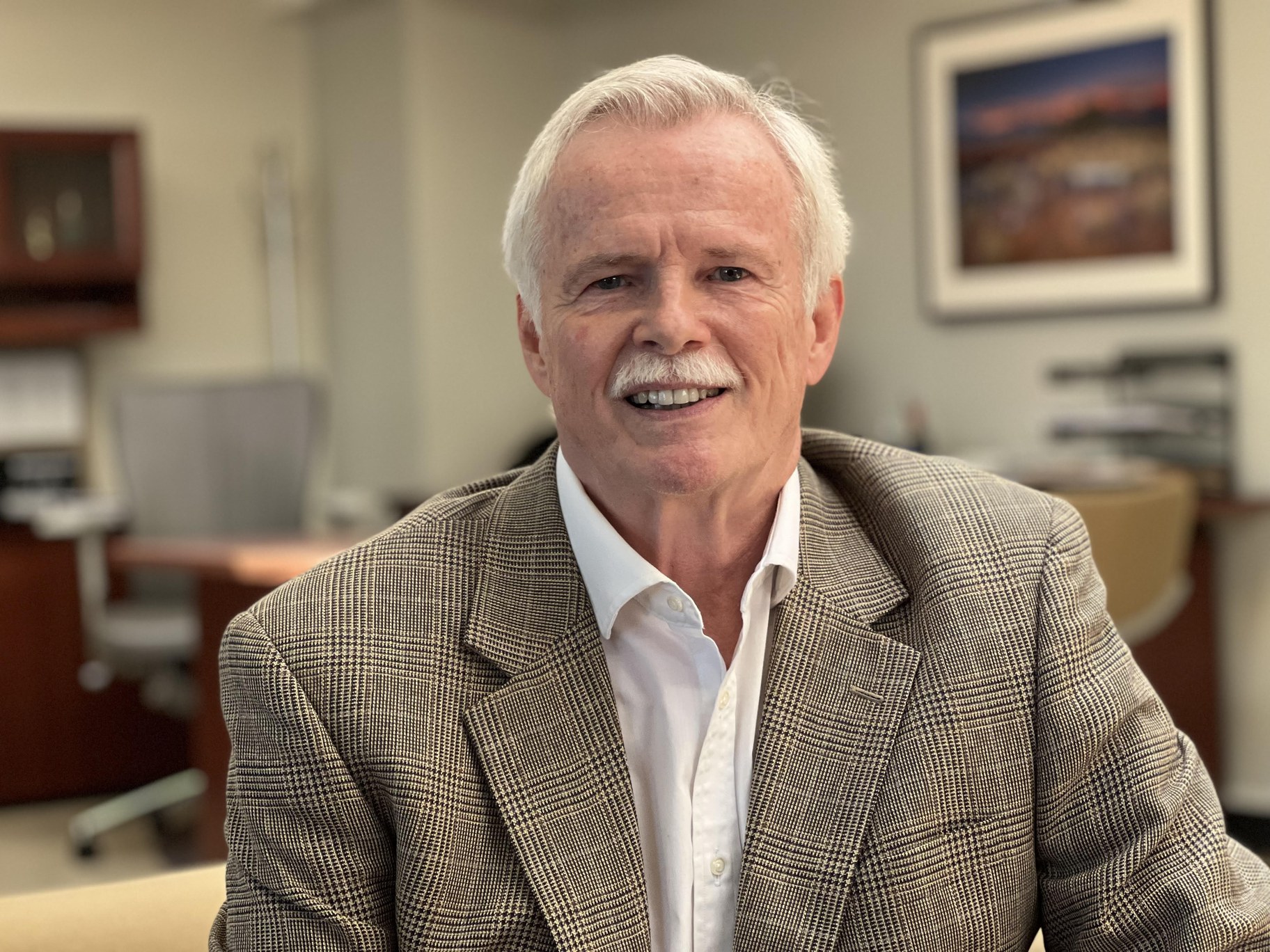 “Public housing fell out of favor decades ago,” says President and CEO of the Housing Authority of the City of Los Angeles Doug Guthrie. Photo by Saul Gonzalez.

More emphasis was placed on using federally-backed Section 8 vouchers to help poor people pay for rent in market rate apartments. And many public housing projects were emptied out and literally blown up with explosives.

When the dust cleared, what was supposed to replace the projects was newer and better mixed-income housing for both the poor and middle class.

“No longer will public housing be reflective of segregation, but of maximum integration and maximum choice,” said Andrew Cuomo in 2000, the secretary of the Housing and Development Department in the Clinton administration at the time.

But public housing redevelopment soon became as much of a political powder keg as the explosives that took down famously blighted projects like Cabrini-Green Homes in Chicago.

Residents complained they had little say in planning what would come next. Housing activists argued public housing redevelopment was a euphemism for pushing poor people out of neighborhoods to make way for gentrification. For all their problems, public housing at least kept a roof over people's heads.

Thousands of Chicagoans who lived in public housing didn’t, or couldn’t, return after redevelopment.

LA housing chief Doug Guthrie says when it comes to the reimagining of Jordan Downs, everything has been done to keep residents informed and part of the process.

“Things learned from Chicago, especially, I would say, you've got to get the community buy-in of this,” says Guthrie. “We understood that, and we didn't make any promises we felt we couldn't we couldn't keep.” 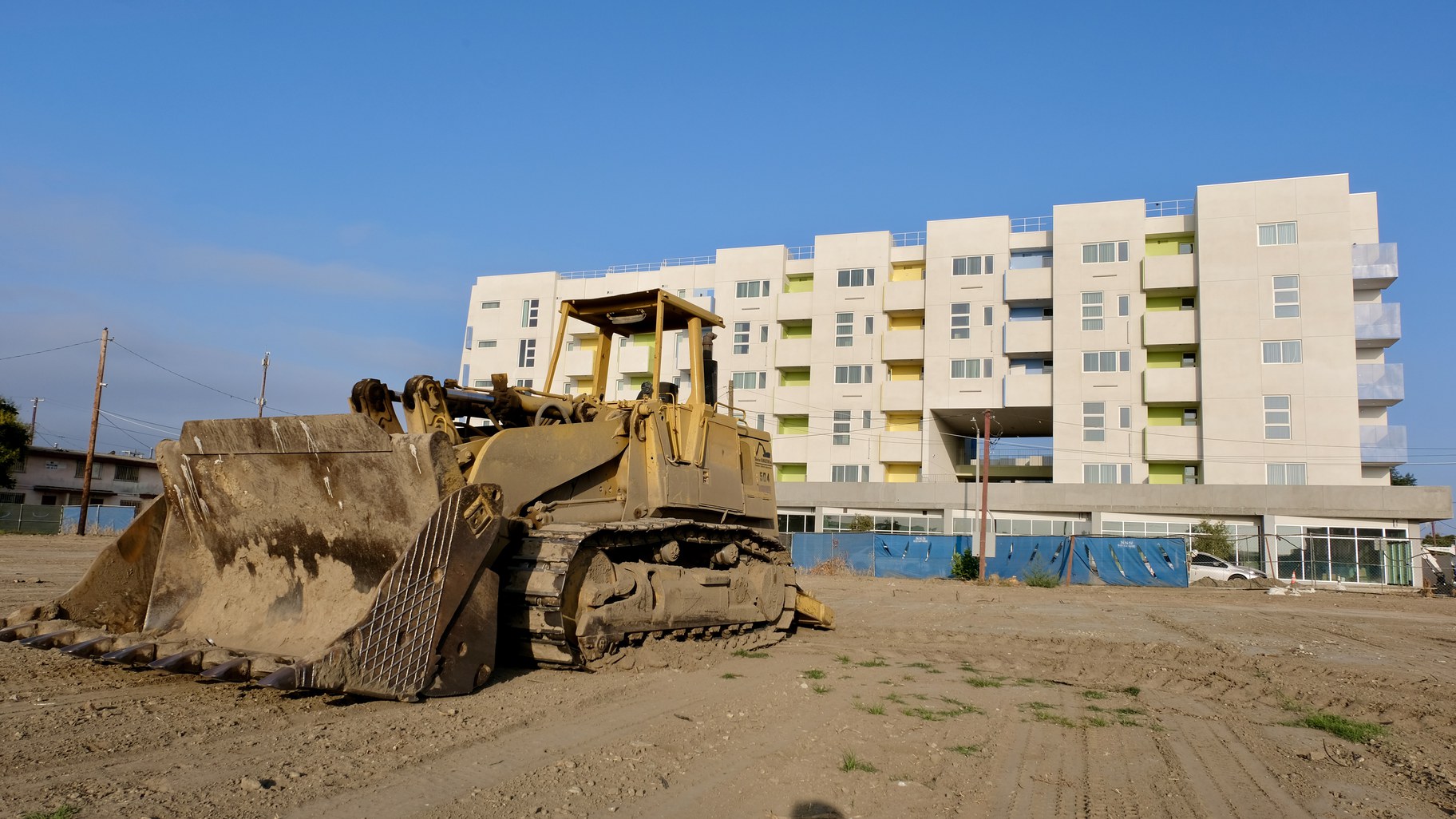 The next phase of Jordan Downs’ redevelopment involves creating public green spaces and the construction of mid-rise apartment buildings. Greater density will allow for a doubling of the population at Jordan Downs. Photo by Saul Gonzalez.

One key promise at Jordan Downs is a right of return, guaranteeing that everyone who lived there before redevelopment can come back after it's done, if they want to. Guthrie says more than 70% of residents have chosen to stay after redevelopment, with most of the rest using Section 8 housing vouchers to move to other places.

But promising residents they could return to Jordan Downs doesn’t mean there weren’t plans to change the kinds of people living there.

The redevelopment project is adding hundreds of new units to Jordan Downs on purchased land, more than doubling the size of the resident population. Initial plans called for new units to be rented out at, or near, full market rates. Other units were even supposed to be sold as condos.

But that idea has been largely shelved for now, says Marco Ramirez, a manager with Bridge Housing, one of the nonprofit developers of Jordan Downs.

“We can't see ourselves justifying market rate units in this community when there are so many people struggling to make rents,'' says Ramirez.

There have been other changes and complications in Jordan Downs’ transformation. The adjacent properties that were purchased to build the shopping center and additional housing are on former industrial sites. There are lingering concerns about toxic pollution in the soil despite cleanup efforts.

Then there’s the speed of redevelopment. There have been big delays getting federal, state and private financing for the project which have set back construction deadlines.

Five years after building started, more than half of Jordan Downs residents still live in the old buildings.

Ramirez says some Jordan Downs residents might have to wait 10 years or more before their new buildings are ready, as construction deadlines get pushed back.

With many of her friends and neighbors still living in old Jordan Downs housing, Shankita Perkins says she feels fortunate.

“I feel like I got lucky because I was in the right spot at the right time,” says Perkins, who enjoys the size and amenities in her new Jordan Downs building, like central heating and air conditioning, and washer and dryer units.

Looking ahead, there are plans to redevelop two other smaller public housing projects in LA — one in San Pedro, the other in Chinatown.

But LA housing chief Doug Guthrie acknowledges there are no plans to do something on the same scale as Jordan Downs for LA’s other large public housing projects. Planning, building and financing the projects, he says, are just too difficult.

Six Starbucks stores across LA are set to shut down by the end of July, and more closures are expected. Some union organizers say it’s an intimidation tactic so employees...

Avant Garde composer Julius Eastman is known for his provocative minimalist compositions. On July 23, LA-based ensemble Wild Up will perform his “Femenine” at the Broad...