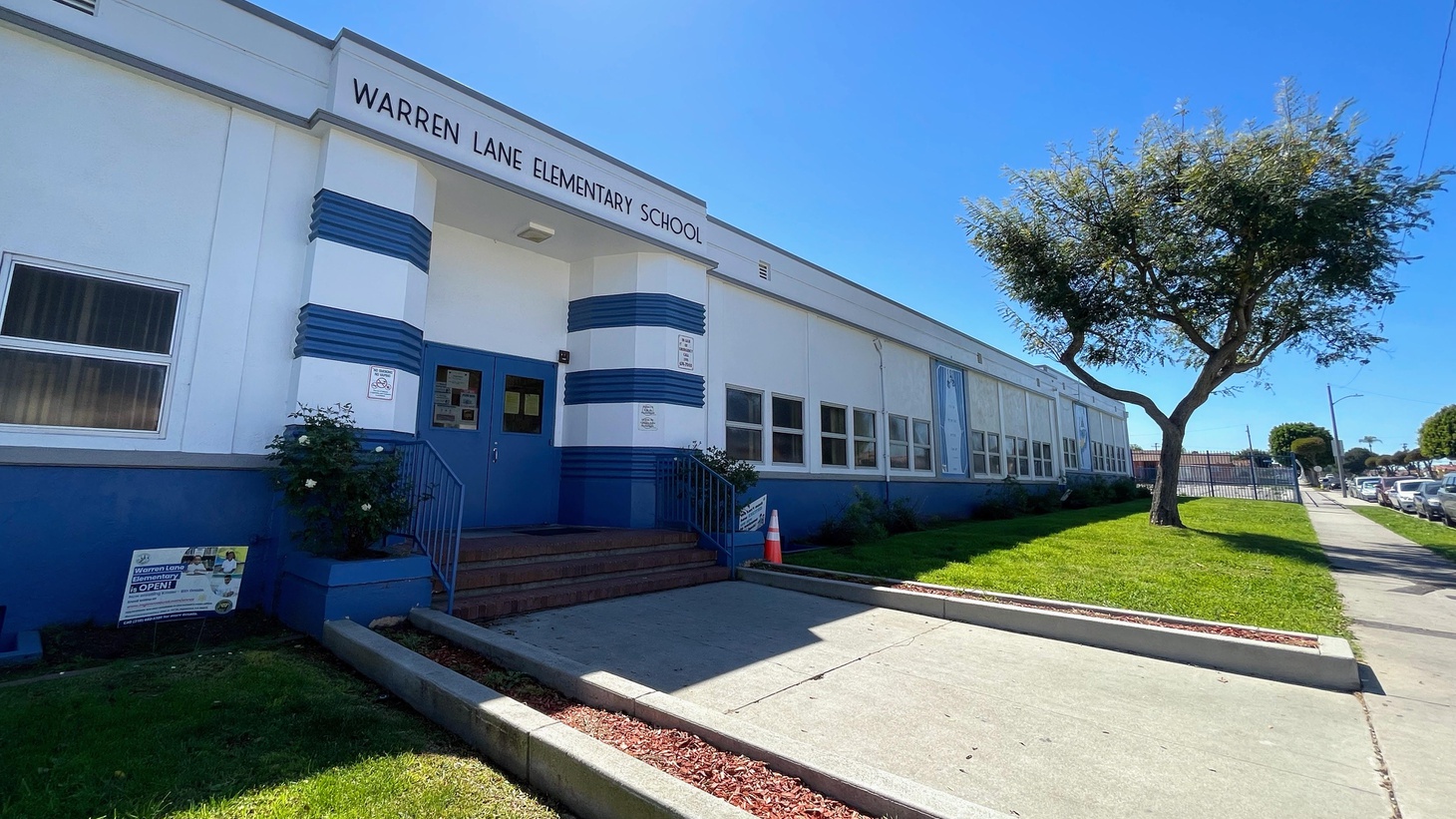 Inglewood Unified School District plans to permanently close Warren Lane Elementary because it is more than two-thirds empty. Falling enrollment is likely to result in more such closures. Photo by Megan Jamerson/KCRW.

Taj Powell bought a house in Morningside Park in Inglewood partly, he says, because it was right down the street from Warren Lane Elementary School, where his 5-year-old son could start kindergarten in the fall.

But now his family faces an uncertain future because the school is set to close permanently in August.

“My child literally could walk to this school, it's the ideal scenario,” says Powell. “I have family in the neighborhood and it's a community. Not having a school in it, it's hard to imagine.”

Warren Lane Elementary was built in 1948, not long after the development of well-kept bungalows that surround it in this predominantly middle-class Black neighborhood. The households here earn the highest average income in Inglewood, and home sale prices can now top $1 million.

“So why wouldn't you want a school in a neighborhood like that?” says Powell, who started an online petition to stop the closure with his wife Mary Chang. “You would never dream of closing the school in Beverly Hills.”

But this painful dynamic is not just happening in Inglewood. Neighborhood schools like Warren Lane are closing across the state. Plans to close seven schools in Oakland over the next two years led to protests and hunger strikes. The main driver of these closures is a drastic 20-year decline in enrollment in California’s public schools.

One of the main factors is the low birth rates seen across the state, says Michael Fine, CEO of the state's Fiscal Crisis and Management Assistance Team. “We’re [at] one of our lowest points in history, certainly [the] lowest point since the Great Depression in the 30s,” says Fine. “[And] we have lower immigration [and] we have a net out of migration.”

Fewer kids enrolled means a decrease in campus budgets, which in California are based on an individual school’s attendance. Less money per student means less revenue at the school for special programs and maintaining the state’s aging school infrastructure.

Warren Lane is a victim of this cycle, and today only 143 kids are enrolled there, which has room for 400 kindergarten to grade six students.

And in an environment of school choice, Warren Lane has not been competitive academically. Test scores show students are not performing at grade level, with only 5% of students proficient at math and 15% proficient in English during the 2018-2019 academic year.

Very low test scores are a problem across the school district, and it’s led parents to pull their kids out of Inglewood schools, says John Hughes, who  was a special education teacher at Warren Lane for 20 years. “The cream of the crop of that school, they left,” he says. 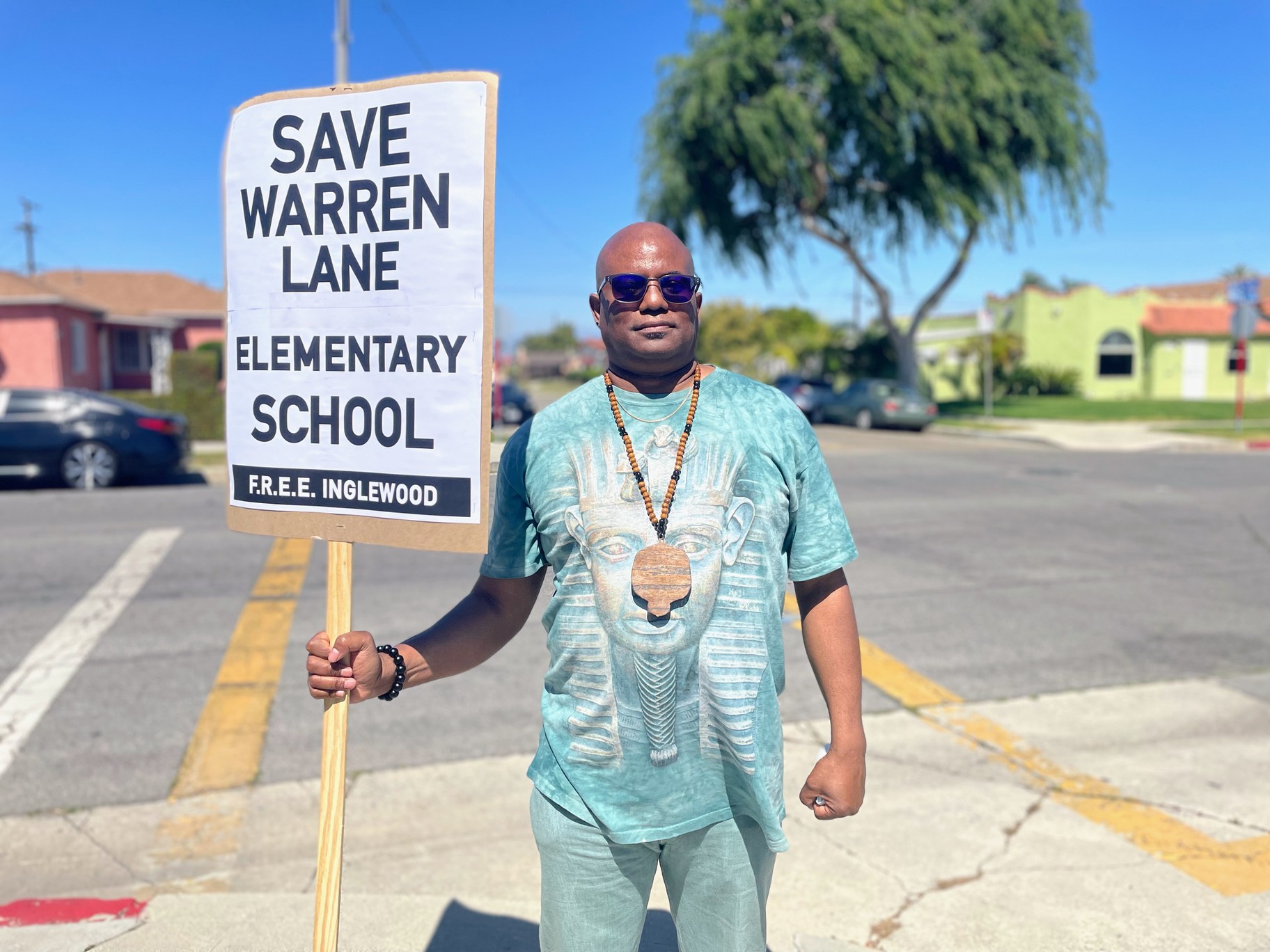 The district is troubled in other ways as well. Sliding enrollment and mismanagement of the district led to a $16 million deficit in 2017. In a rare move, the state took over the school district through what’s known as a receivership, and provided an emergency loan to keep it solvent.

Five years later, the district is still under state control — the longest any school district has been under receivership. This means the school board doesn’t have the power to make decisions. Instead a single person, appointed most recently by the LA County Department of Education, is in charge. That role has been held by a revolving door of people over the last five years.

Inglewood Unified is facing another projected budget deficit in 2023, and chose to close Warren Lane because it has the lowest enrollment in the district.

Parent Marian Coffield wishes the district had instead targeted more urban schools near Interstate 105 and 405. “We're not looking at what's going to be best for students long-term or what would benefit Inglewood as a district,” says Coffield. “It was just, ‘Hey, you have low enrollment.’”

The office of the County Administrator in charge of IUSD, Erika Torres, declined KCRW’s request for comment on the public’s reaction to the closure.

Coffield, who has a sixth grade son at Warren Lane, is frustrated the district hasn’t done more to revive the school and attract parents.

The district first considered closing the school in June 2020. There was talk of creating a magnet program to attract new students to Warren Lane, but that didn’t happen.

Then there was discussion of using a local bond measure that was approved to make infrastructure improvements to district schools. Warren Lane needs asbestos abatement and repairs to the playground, but so far only the exterior has been painted. Instead, closing Warren Lane is estimated to save the district $9.8 million in needed repairs.

“The district may be in a place where they think that they're doing what's best, but they're gonna lose a lot of students based on this,” says Coffield.

If Warren Lane closes, Coffield will be sending her son to a different district with better test scores. The only thing that was keeping her in Inglewood Unified was the value of being able to walk her son to Warren Lane and develop connections with neighbors and fellow parents along the way. “It changes how you look at yourself,” Coffield says of that community experience. “It changes how the child grows up, it adds to their level of confidence. It creates a different type of stability in them emotionally and mentally.”

John Rogers of UCLA agrees. “We feel a sense of connection to it. It's part of our collective identity,” hey says. “I think that's a very different notion than this idea that public schools only are a place that provides instructional services to individual students.”

When schools are closed in Black neighborhoods, there is an added level of complex feelings about yet another place of public ownership being lost. Add onto that the trauma of the pandemic, says Rogers, and people need stability and certainty now more than ever.

“Our local public institutions give people a sense that there's something that they can turn to when they're in need,” says Rogers. “And I think change at a time of extreme trauma is particularly problematic.” 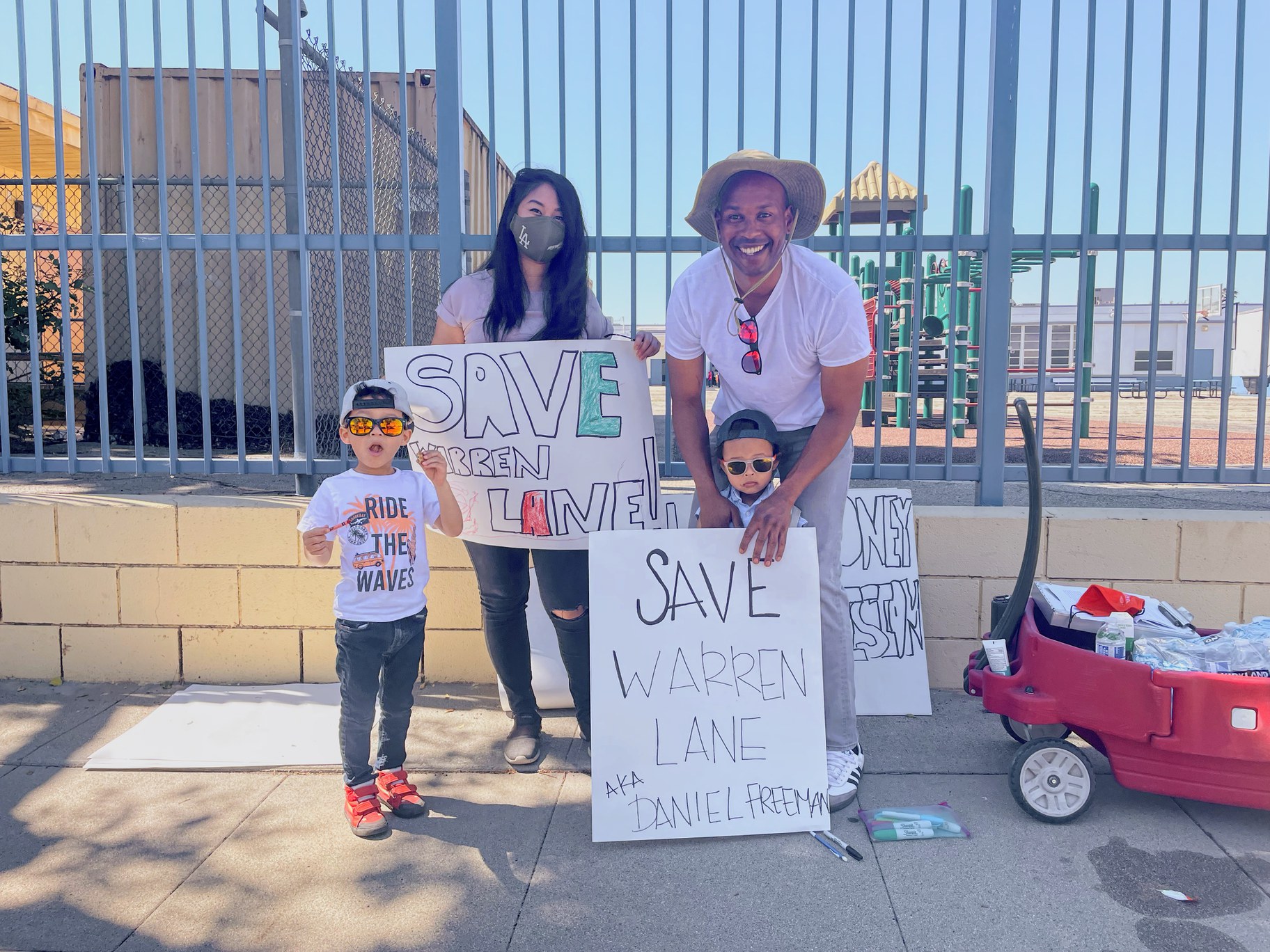 Mary Chang and Taj Powell peacefully demonstrated with their sons in front of the Warren Lane Elementary school playground on March 24, 2022. The couple created a petition to save the school from closure. Photo by Megan Jamerson/KCRW.

Community members are circulating a petition to stop the planned closure of Warren Lane, collecting signatures through a petition online and staging weekly demonstrations in front of the school to gather support.

If the Warren Lane closure goes ahead as planned, parents will have the chance to enroll their children in one of the district's other schools. Coffield says driving your child across town to school means fewer chances to benefit from living in a multi-generational community built up around a school.

“If we're all going in different directions, we never see each other,” she says. “Then this community [won’t] feel the same anymore.”