Dora Herrera, owner of Yuca Hut, says a loan from the Paycheck Protection Program allowed her to stay open. Most Latinx or Black small business owners have not been so lucky. Photo by Jerome Campbell.

When restaurateur Dora Herrera prepared her loan application for the Paycheck Protection Program (PPP), she had a laundry list of contacts to help her. Three weeks later, she got her loan.

“We're very happy, particularly for employees who now don't have to worry about being furloughed or laid off,” says Herrera.

Most Latino or Black small business owners have not been so lucky.

The National Bureau of Economic Research reports that nearly one third of all Latinx-owned businesses had closed at least temporarily since the start of COVID-19. More than 40% of Black-owned businesses also closed.

Meanwhile, only 17% of white-owned businesses closed in that same period.

The inspector general for the Small Business Association, which operated the program, says in a report that they did not do enough to direct money to business owners of color to help pay their employees.

Critics say inequity was designed into the program.

“The way that the program was built, it was pretty evident early on that there were going to be problems for small businesses that were people of color owned to be able to take advantage of this opportunity due to the structure of the program,” says Marisbel Torres. She’s the California policy director at the Center for Responsible Lending.

First, the money didn’t go to the right banks. Most of the loan money went to larger banks, which Torres says have historically denied loans to Black and Latinx businesses.

She adds that the right strategy would have been to send some money to banks with a mission to help people of color.

Second, Latinx and Black people who own businesses are much more likely to be sole proprietors than white business owners. Government rules indicated that sole proprietors had to wait a week to apply.

The one-week delay was disadvantageous for smaller businesses, adds Torres.

KCRW reached out to several of the larger banks to ask why businesses of color fell through the cracks. It’s the same question House Democrats, like South LA’s Maxine Waters, are asking as they demand more information about what companies received the loans.

The banks didn’t respond to KCRW, but have previously said they didn't have instructions on how to dole out the money.

They also say it took a long time to get applications back to the government, which brings up one of the biggest hurdles: banking relationships.

“What you saw in the first round of PPP funding was that the money was distributed very quickly, but the participating banks prioritized larger businesses and those businesses that had those existing financial relationships,” says Torres.

She adds, “So if you were a smaller business, you were at a disadvantage right from the jump.”

That’s what happened to a small businesswoman in Covina named Anita Ron. She runs a commercial janitorial business called Briteworks. 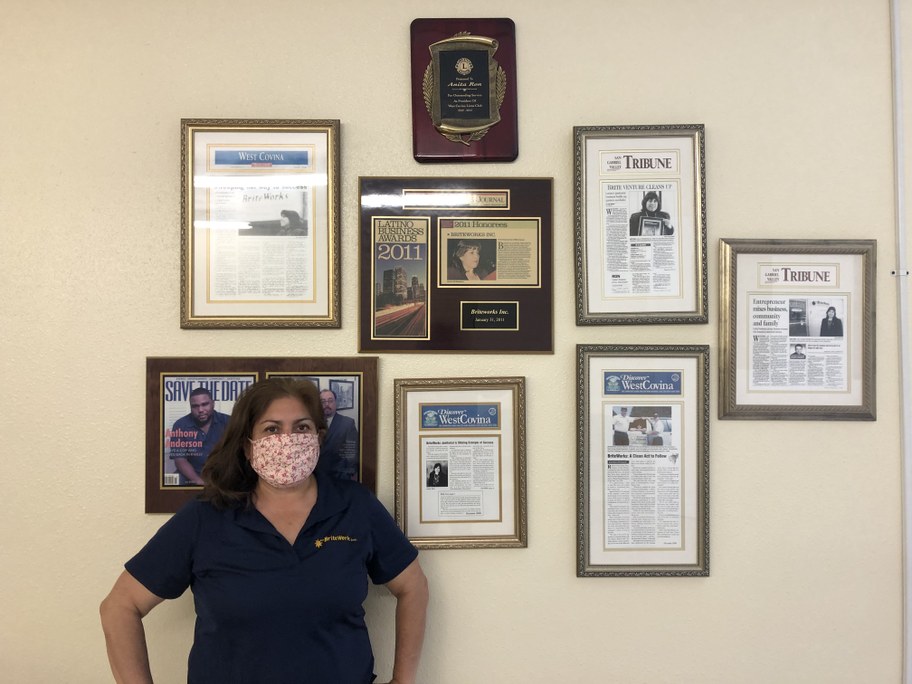 Anita Ron, owner of Briteworks, poses with her accolades. She’s been in business for more than 20 years. She says without a loan from a PPP loan, her business would disappear. Photo by Jerome Campbell.

When the pandemic began, she was trying to keep her 130 employees on payroll when some of her work contracts dried up.

Ron then went to her bank, one of the larger banks, but she wasn’t able to secure a loan with them. They never got back to her about her application.

“I did everything that was needed to do as a small business to let them know I was interested, but the process wasn't reciprocated,” says Ron. “So that let me understand that I wasn't important to them.”

Eventually, she did get a loan from a local community bank. She says that she made the connection before the pandemic, and the institution reached out to help her once the PPP loan program was announced.

Within a month, Ron submitted her application and received the money she needed, but she wasn’t sure how long the money would last.

In the two months since she first applied for the loan, she’s seen more businesses cancel their contracts as a cost-saving measure.

“This money may have bought me some time to keep going, but eventually the business will need to get back to normal,” she says. “So I’m trying to figure out how I can keep my people employed. It feels like my responsibility, and I’m kind of by myself.”