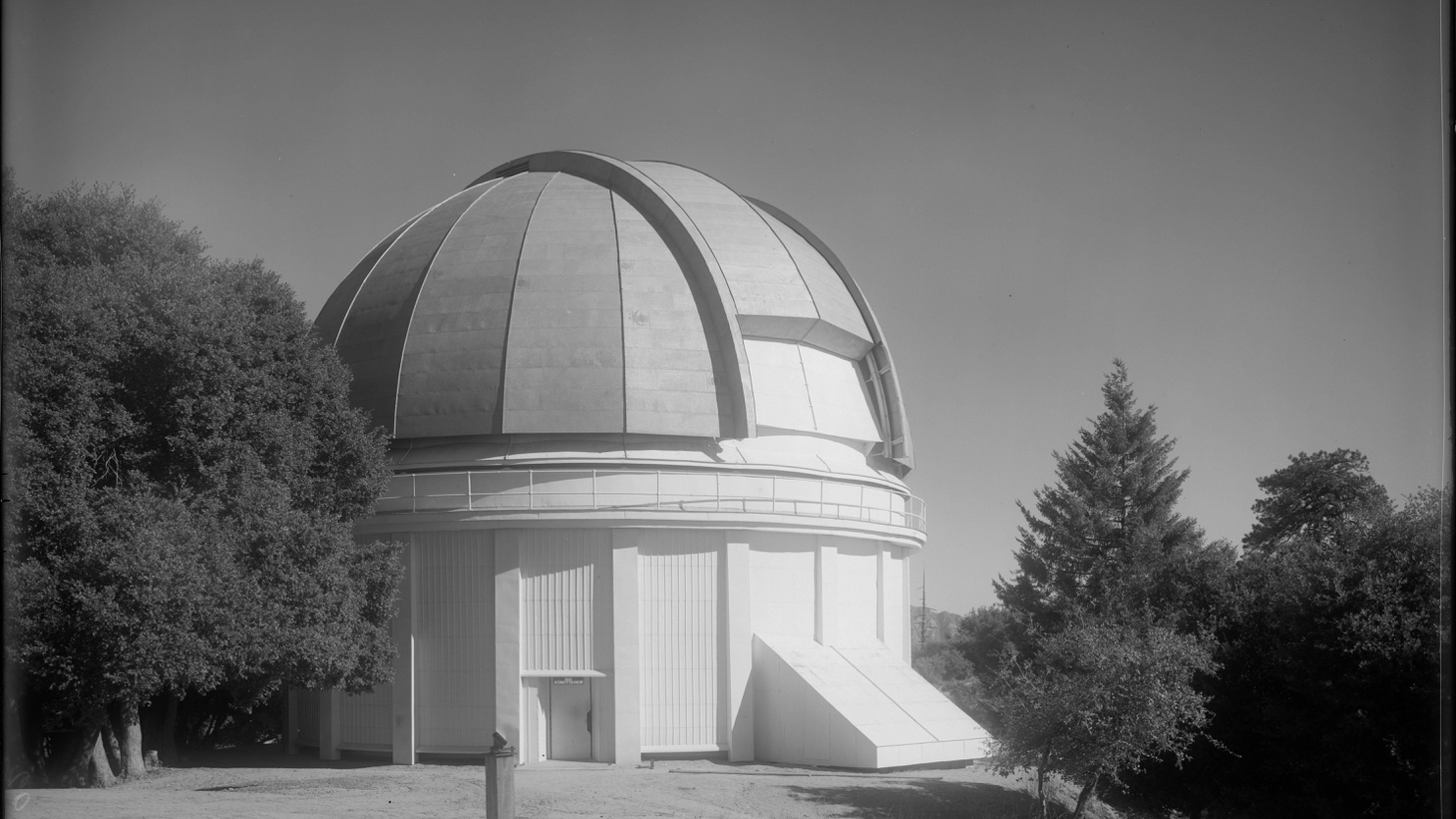 The home dome of the 60-inch telescope has stayed the same since 1914. Photo courtesy of the Observatories of the Carnegie Institution for Science Collection at the Huntington Library.

When night falls, you can stand almost anywhere in the San Gabriel Valley, look to the north at Mt. Wilson in the distance, and you’ll see the glowing lights of TV and radio antennas spiking into the darkness.

But that’s not all that’s up there.

Among the pine trees and coyotes, high above the humdrum, terra firma existence of Los Angeles mortals, sits the Mt. Wilson Observatory.

For over a century, it’s been a gateway to the heavens.

The twin, chalk-white domes atop the ridge are home to two aging but still mighty telescopes. The 60 and the 100-inch machines are arguably the most important in the history of astronomy.

Superstars of astro science like Edwin Hubble, George Ellery Hale and Albert Einstein have looked through them.

And you can too. In fact, anyone can rent the scopes for the whole night. They’re complete with an astronomer to guide your trip through the astonishing wonders of the dark and endless firmament. And snacks are included. 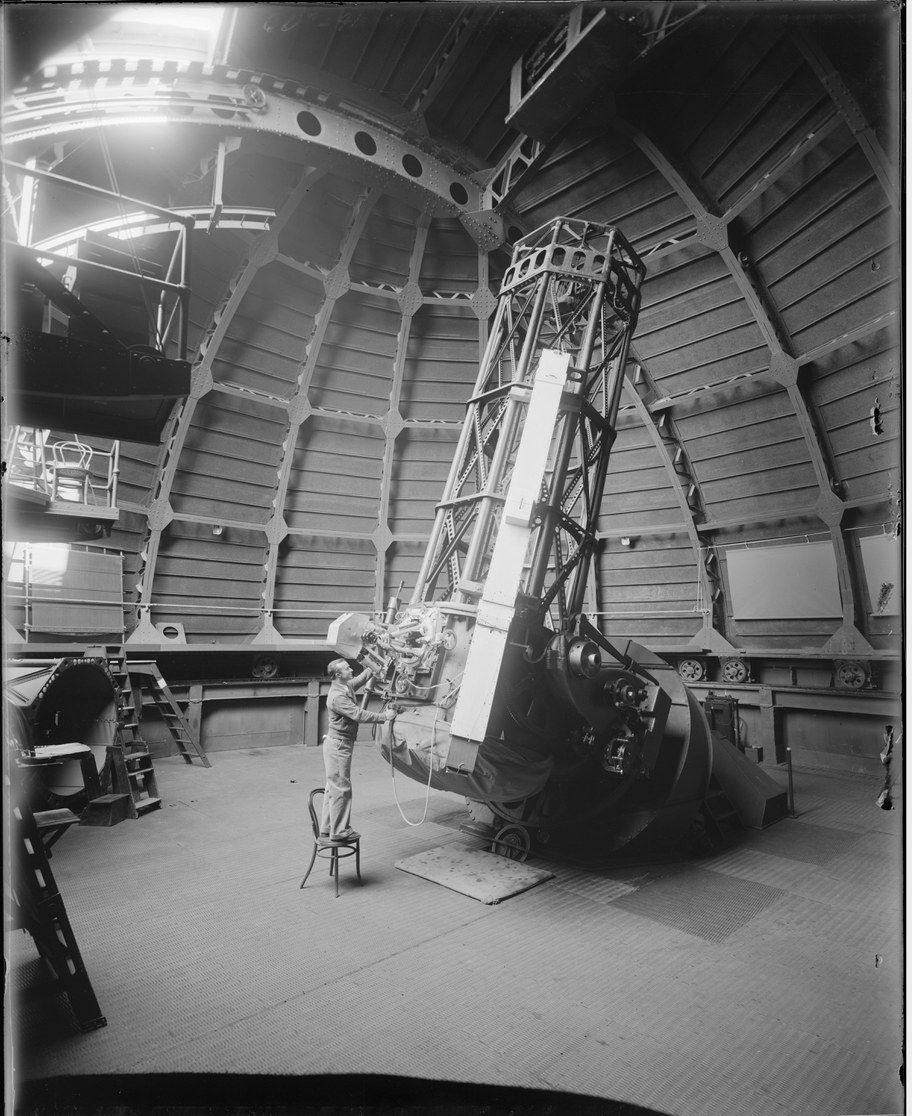 Astronomer Joseph Hickox adjusts the camera attached to the 60-inch telescope at Mount Wilson Observatory, circa 1940. Photo courtesy of the Observatories of the Carnegie Institution for Science Collection at the Huntington Library.

The 100-ton dome wails like a metallic banshee as it slowly turns to accommodate the view of the 60-inch telescope, a move it’s been making since things began here so long ago.

“In 1908 it was the largest telescope in the world,” says telescope operator Tom Mason. He’s one of a devoted cadre of amateur astronomers and retired engineers who keep things going atop Mt. Wilson. He’s been volunteering at the Observatory for 17 years. 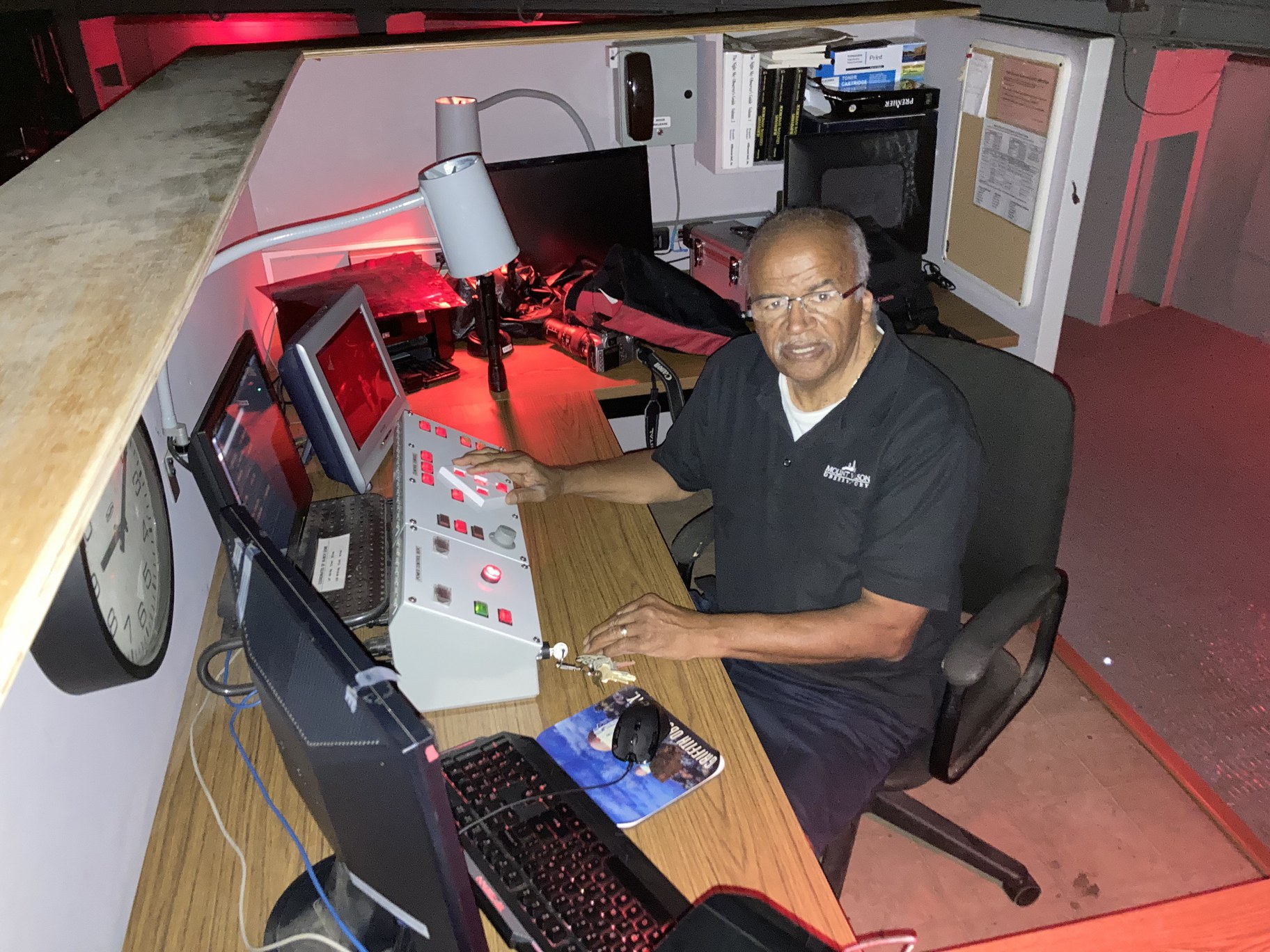 The telescope is a sight to behold. It’s an industrial lattice work of tubular steel angled toward a crack in the dome like a cannon. It’s about the size of a crouching tyrannosaurus rex. It’s painted baby blue. 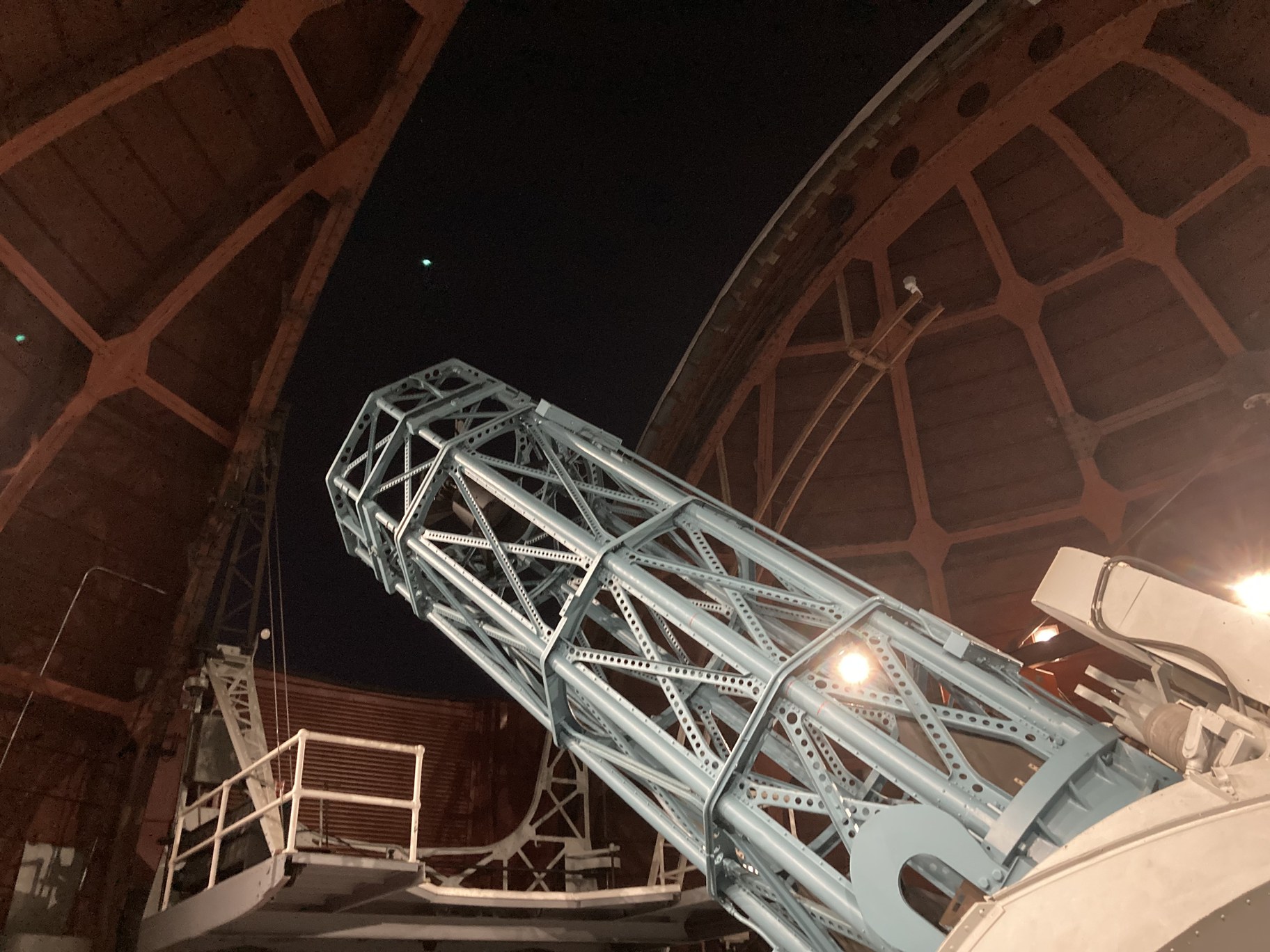 The tube got here 113 years ago on the back of a truck that barely made it up the winding dirt road from Pasadena.

The unbelievably delicate, 60-inch mirror that’s the reflecting heart of the scope arrived by a team of pack mules. 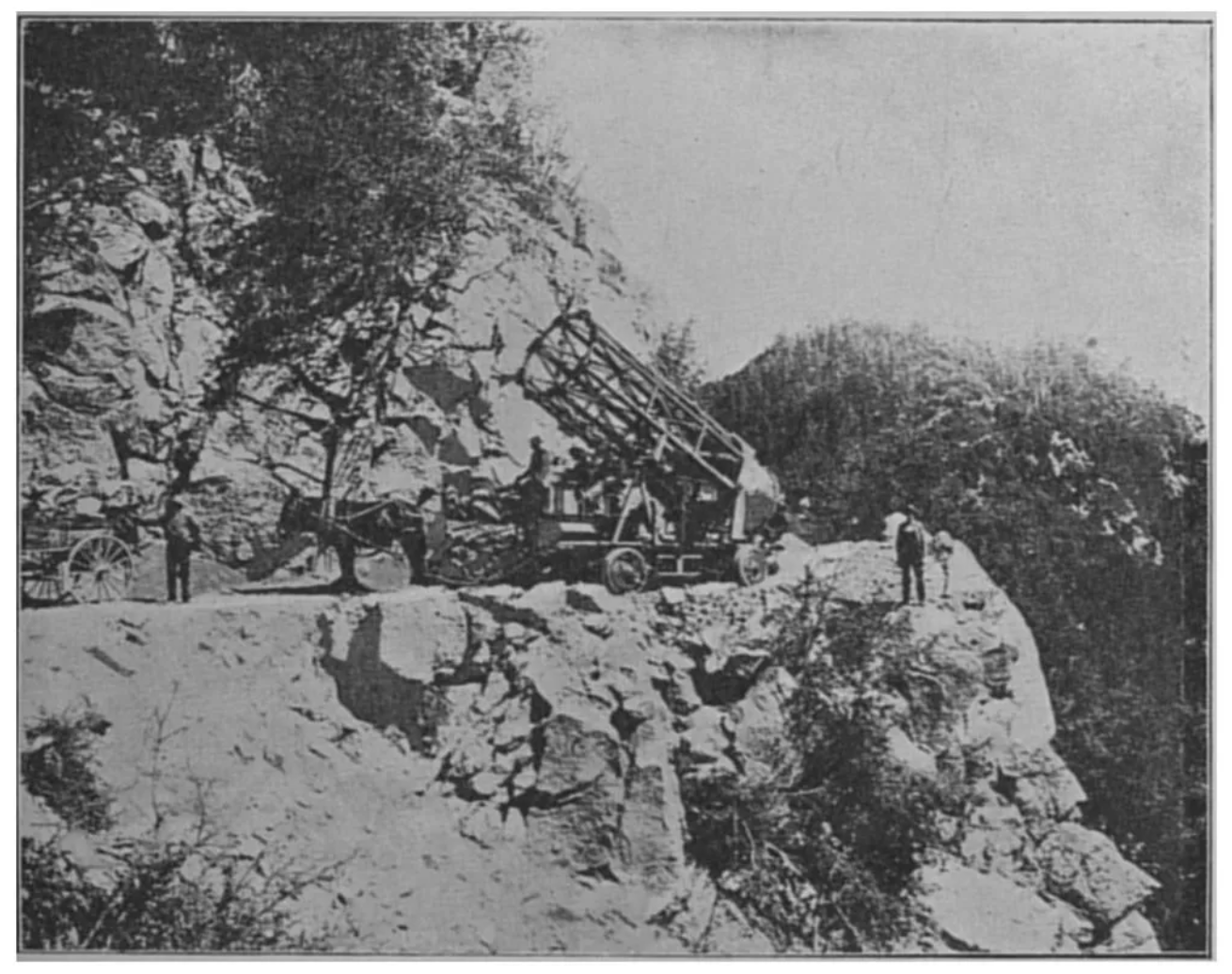 Mules and men maneuver a telescope tube up to the Mt. Wilson Observatory. Photo courtesy of the Observatories of the Carnegie Institution for Science Collection at the Huntington Library.

Since the machine opened its enormous eye on the skies, it’s lived to become the granddaddy of virtually every modern scope in existence.

And while Los Angeles constantly grows and mutates upon itself, demolishing and building, again and again, year after year, on Mt. Wilson, things barely change.

They don’t trust it to a computer. It’s a notion that’s absolutely breathtaking in this day and age. The observatory operates on a DC power system that’s been refurbished over the years.

The operator’s desk is a simple control center that features buttons. Buttons you press to make things move. That’s it.

And don’t even think about cell reception up here.

That means you can look down the scope’s eyepiece at an ancient, long-dead star still beaming its ghost light toward earth, but you can’t text anyone about it.

Many celestial mysteries were solved at the observatory.

Scientist Harlow Shapley worked at Mt. Wilson from 1914 to 1921. He used the telescopes to determine the size of the Milky Way Galaxy. Yes, the size of the galaxy. This guy you’ve never heard of did that.

He also found that earth was not the center of that galaxy.

“So what did that do? That moved us out here off one of the arms of the galaxy,” says Mason. “Great discovery right here with the 60-inch telescope.”

And a blow to the ego of those who thought earth was king of the hill.

“Well, our ego's been blown a couple of times up here, cause we thought we were the only galaxy, and then Edwin Hubble came along and discovered that yes, there is another galaxy out there. And now we're in the billions of galaxies type thing.”

It’s enough to make a man feel a bit tiny.

“Yes, it does,” Mason says. “Because of how big this is, but also as a Christian, it also brings my attention to something. The Scripture says, ‘Oh Lord, oh Lord, what is man that you are mindful of him, compared to this great universe you made?’ So as big as it is out there, and everything that's out there, you just keep going and keep going and keep going, and we keep learning about it. And [there’s] this little dust spot, the earth, and then I'm a dust spot on that earth. And he's mindful of me. That's also exciting.”

Mason is a member of Christ Community Church in West Covina. Tonight some of his fellow church members are renting the telescope.

Vicki Heim is part of the congregation. When it comes to her top heavenly sighting, she doesn’t hesitate.

For Heim, the God versus science question is a non-issue. “To me, it just couldn’t be anything else but God’s creation. Just no possibility.”

And that includes the telescope? Heim glances at the contraption peeping at the heavens. “Yeah, ha ha … yeah.”

Throw in the coffee, cold cuts and brownies with the quasars, nebulas and white dwarf stars, and it’s a hell of a deal.

So, how did this sanctuary of science become a fun night out for anyone with a credit card?

Just too much light. Astronomy loves the darkness.

By the late 1990s, Los Angeles had become ground zero for light pollution. As scientific research was moving from Mt. Wilson to low wattage places like Chile, the decision was made to open the facility to the public.

This rare opportunity has drawn all kinds of people up the mountain. Some come to marvel and — though there’s a strict no booze policy — others come to party.

“As a matter of fact, in the other dome tonight, there’s even a birthday party going on,” says Tom Mason. “We’ve had engagements here, we’ve even had a wedding party that stopped by after the wedding before they started their honeymoon. Now, they didn’t stay too long, but that’s up to them.”

Sunshine Daye came from Long Beach with an open mind and no real idea of what she would experience. She’s not part of the church group. A friend gave her a ticket.

As she steps away from her turn gazing through the telescope she looks stunned — even above her mask.

“Wow. I’m looking at what appears to be like dots, but they’re actually the planets, and as I fine tune the eyepiece, I can actually see how different the two planets are. It’s amazing to be able to see that far.”

So, looking through this mountaintop window into the distant reaches of space, what does she think about? 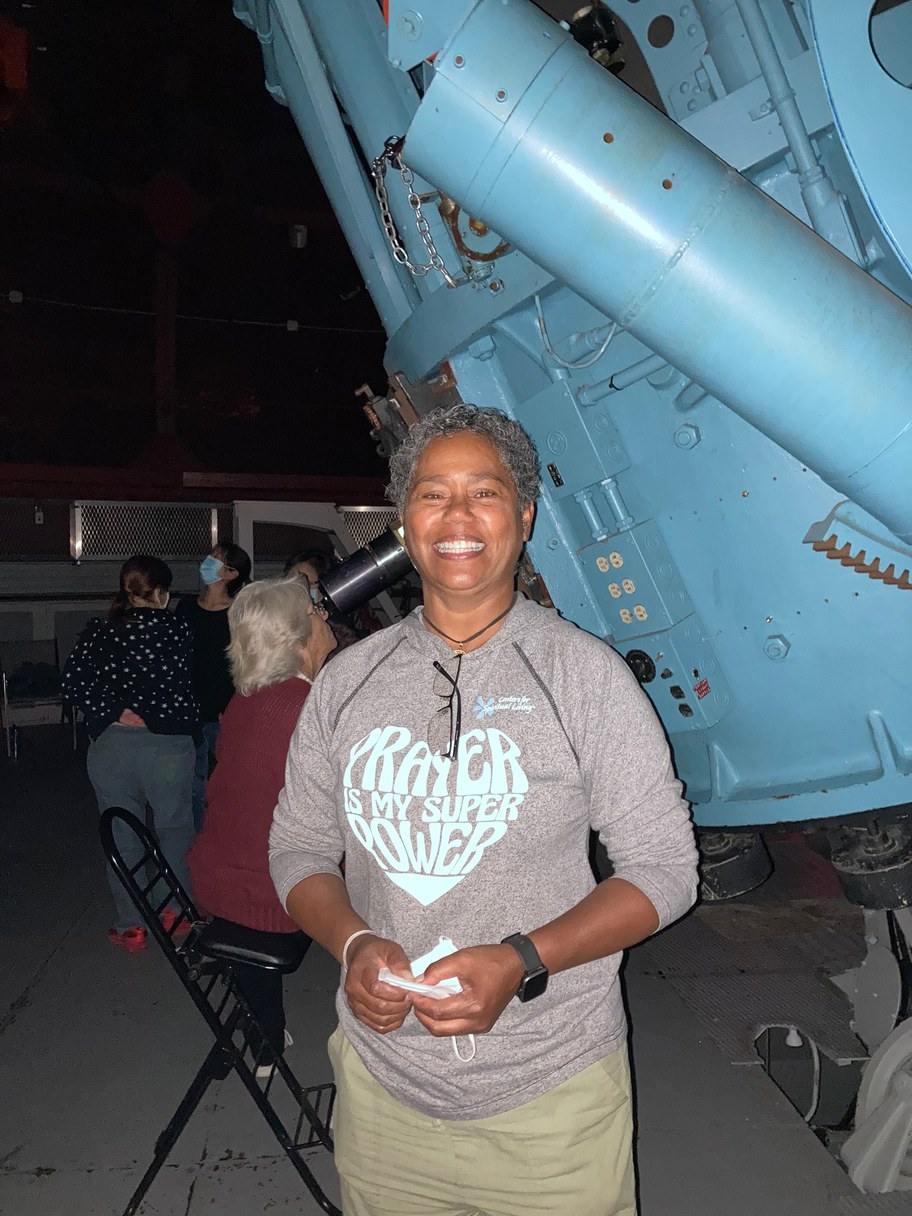 Observatory visitor Sunshine Daye smiles after her first look through the telescope. Photo by Peter Gilstrap.

“I think about what’s happening out there in the sky is actually happening inside of me. Like all my cells and capillaries, my organs, how things are just kind of orbiting and rotating, how my lungs fill with air. There’s just like this divine order to things,” says Daye. “Those are things I get to think about when I come to places like this. Having it to rent out and to be able to come and see this is absolutely awesome.”

Are earthlings alone in the universe? JPL’s new director wants to find out

Scientists at NASA’s Jet Propulsion Laboratory in Pasadena jumped for joy in 2012 after guiding Curiosity to a safe landing on Mars.

When night falls, you can stand almost anywhere in the San Gabriel Valley, look to the north at Mt. Wilson in the distance, and you’ll see the glowing lights of TV and radio...