Gray pines, which are harvested for their pine nuts, were once a major food source for many native people, including the Chumash. Photo by Kathryn Barnes/KCRW.

“It’s bringing back to life something that's needed,” says Chumash tribal elder Tom Lopez, who’s stopping by to transplant medicinal herbs into raised garden beds. “Having our history taken from us and our culture, it's nice to be able to teach our young children.”

Built by the Santa Ynez Chumash Environmental Office (SYCEO) in 2017, the nursery is home to more than 60 traditional plant species that are culturally significant to the region’s indigenous people. Tribal members collect seeds from the nearby Los Padres National Forest, cultivate them at the nursery, and then encourage the community to propagate them in their own landscape. 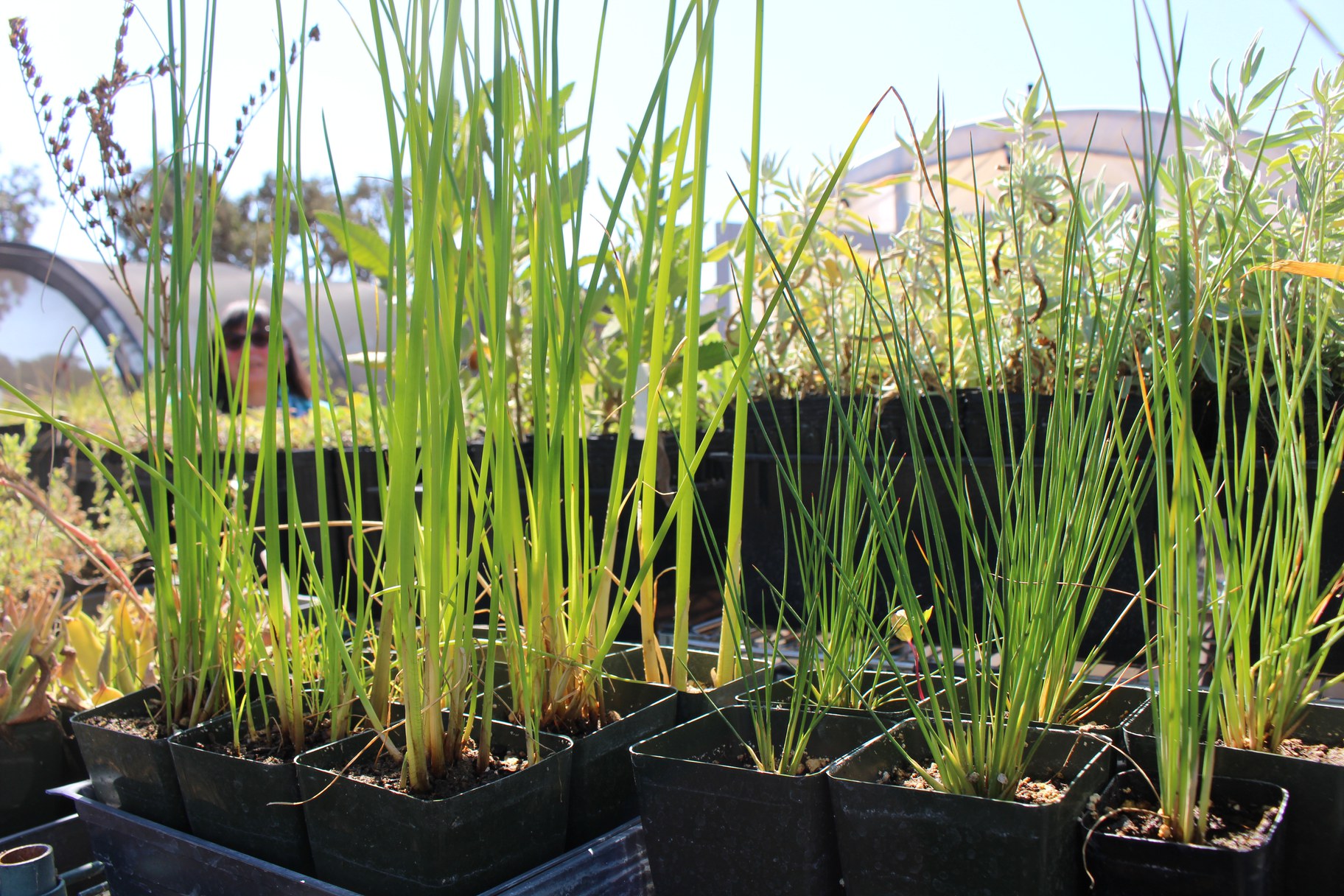 Traditionally, Chumash houses were thatched with fiber from the Tule plant. “A lot of the development that’s taken place in this part of California has been over the wetlands, so the habitat for this has shrunk a lot,” says Cordero. Photo by Kathryn Barnes/KCRW.

Before early explorers and Spanish missionaries settled along California’s south-central coast, the Chumash tribe harvested native plants for food, medicine, and fiber — from the beaches of Malibu to the rolling hills of Paso Robles. For centuries, they tended to the wild sustainably and without fear of persecution.

Colonization, urban development, and climate change disrupted that practice. Even today, Chumash people have a hard time finding the plants their ancestors used to survive.

“There might have been a lot of them in places that people knew to gather them for hundreds of years,” says Diego Cordero, the lead technician at SYCEO. “Those places have been developed, or the change in climate, with increased fires. … These plants … don't grow there anymore.” 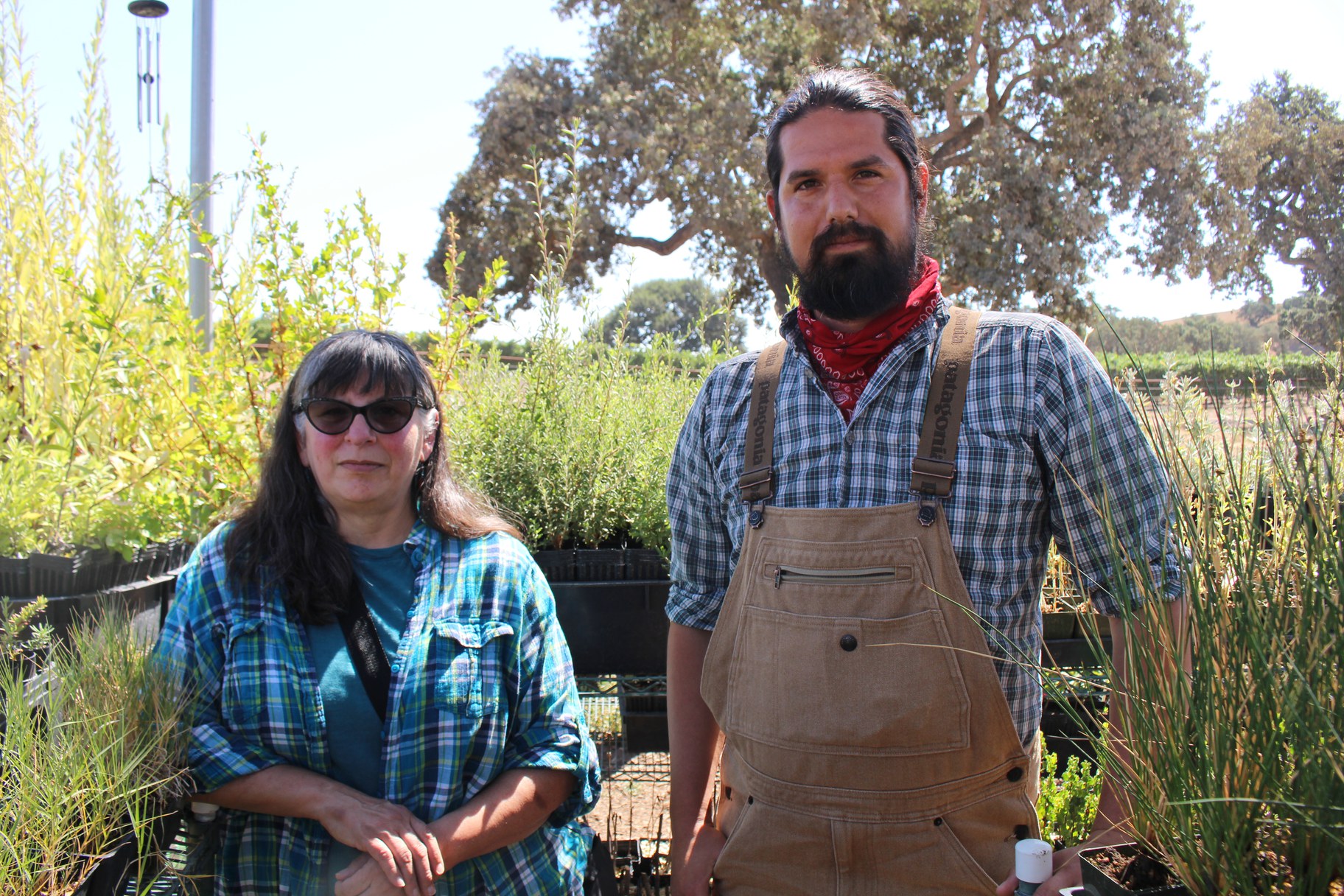 Teresa Romero and Diego Cordero began building the nursery in 2017. “When I got here, this was just an empty horse corral,” says Cordero. Now tribal members can pick up plants by donation. Photo by Kathryn Barnes/KCRW.

The goal of the nursery is to propagate culturally relevant plants and make them accessible for today and tomorrow’s native people. Some of these plants are grown to eat, like gooseberries, coastal live oak, and chia sage. Some for medicine, like chuchupate, yerba mansa, and mugwort. Some for fiber, like tule and juncus. And some for spiritual ceremonies, like tobacco and white sage. 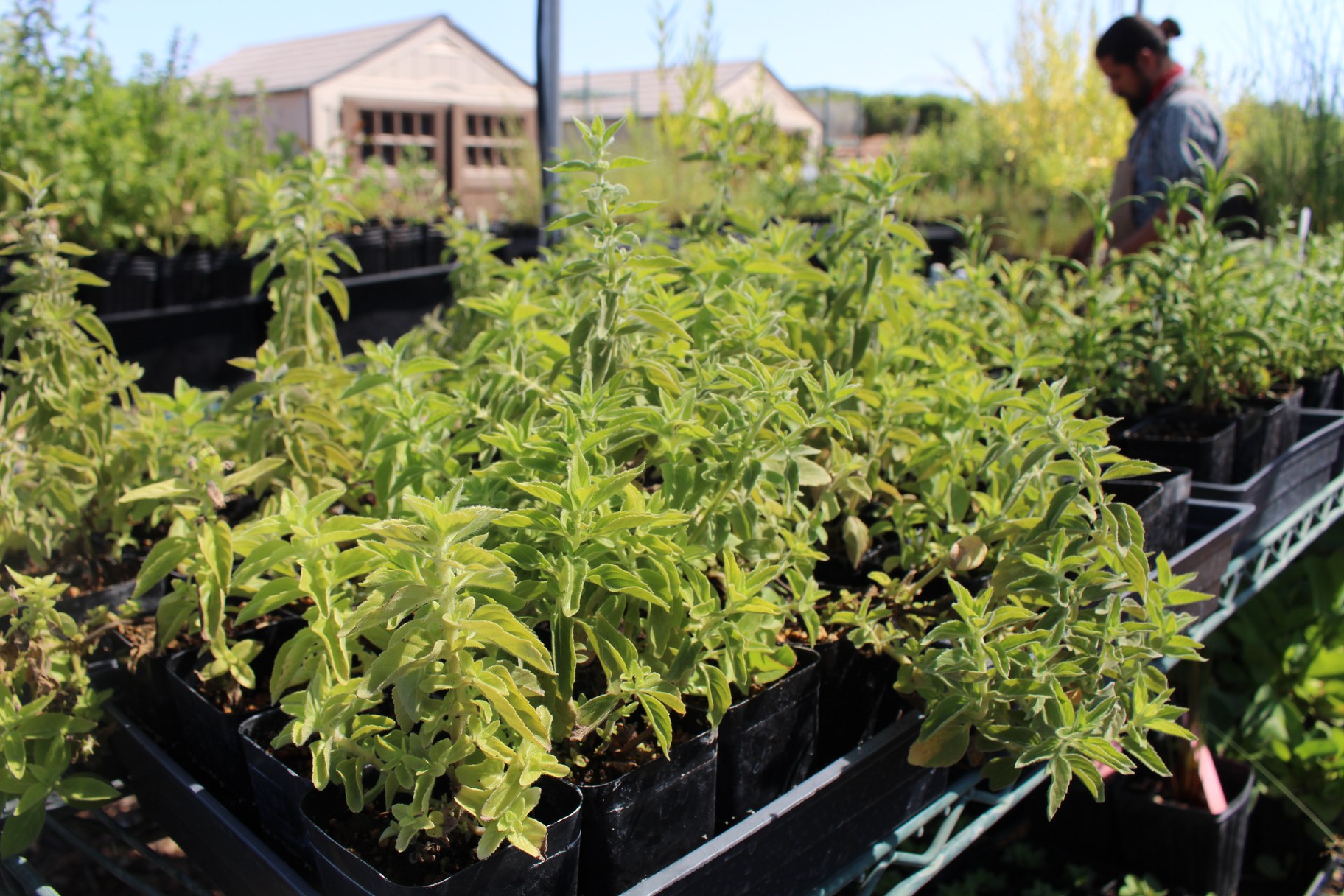 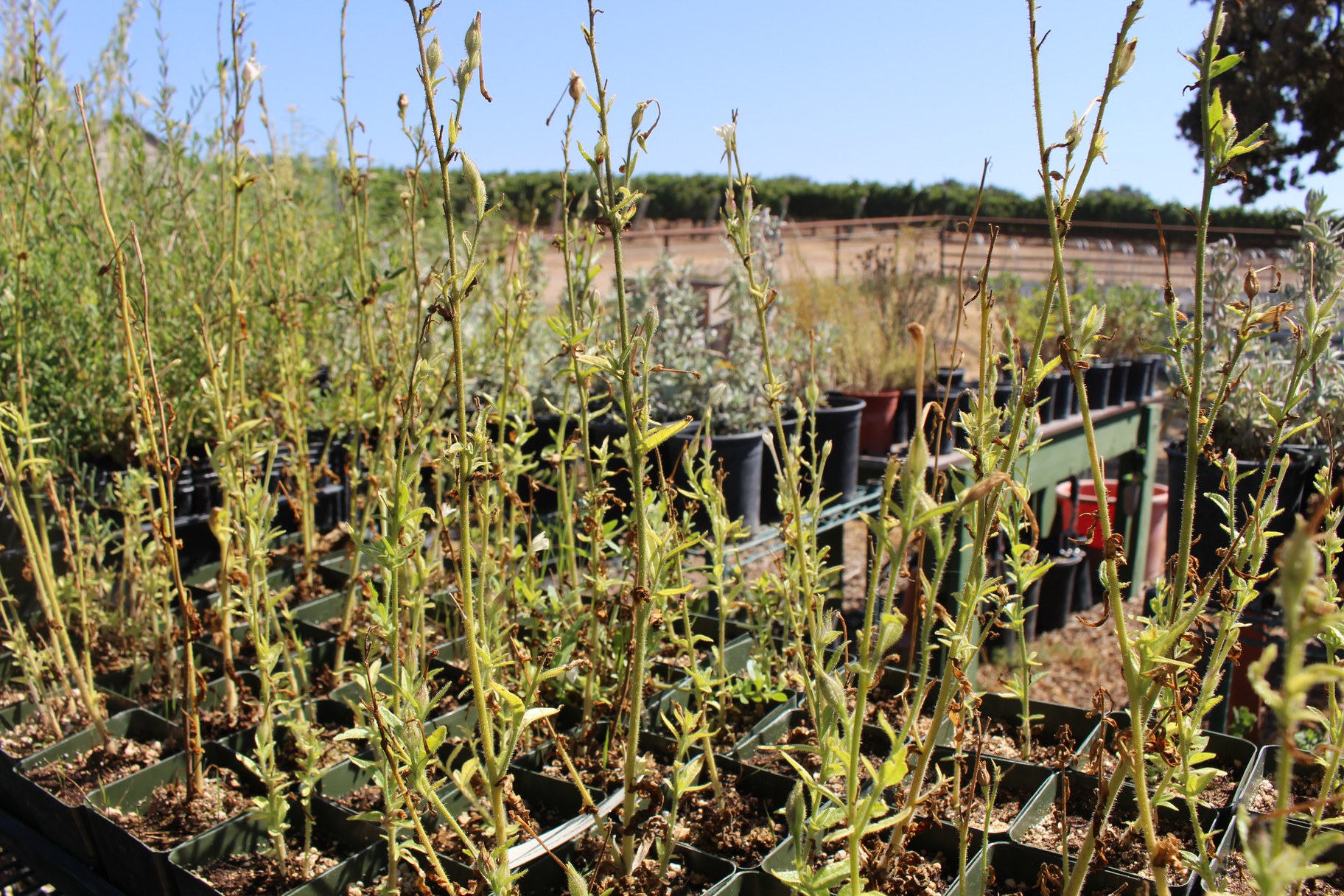 Tobacco is traditionally dried and used as an offering during Chumash ceremonies. Photo by Kathryn Barnes/KCRW.

Some plants, like sage, have become popular among non-native people. You may have seen it for sale online or in boutiques as part of “smudge” or “house cleansing” kits.

“A lot of native people feel like it's really wrong to sell it,” and its popularity is leading to overharvesting, says Cordero. “People harvest it at a time or in a way that actually harms the plant, and prevents it from really thriving. Enough people do that, and you start knocking back the population.” 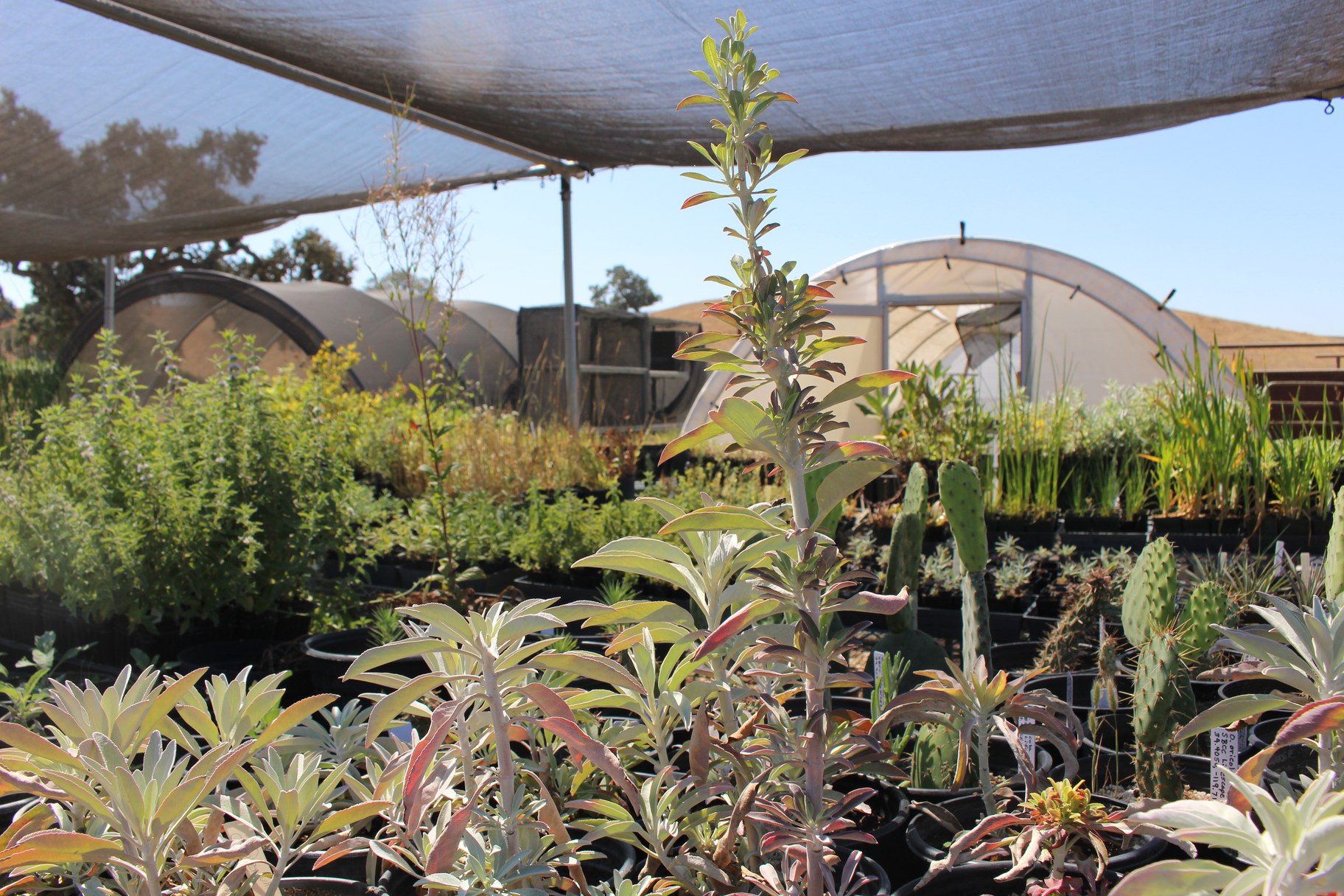 If you like burning sage, he recommends growing it yourself rather than buying pre-wrapped bundles or plucking it from the wild. Then you can form a relationship with that plant and learn how to tend to it sustainably.

That’s another thing that sets this tribal nursery apart from nearby botanic gardens: The human connection is intrinsic to its mission.

“I don't think that what we do and what the botanic gardens do is in conflict, but we're approaching it from a different place,” says Cordero. “They're looking at things from a very analytical, scientific perspective. We're looking at it from a perspective of relationships that a particular population of people has established with a particular population of plants over the course of eons. We're trying to do our part to assist in the continuity of that relationship.”

In other words, everything growing at the tribal nursery serves both an ecological and cultural need.

Community members can book an appointment to visit the nursery. When pandemic precautions die down, the tribe plans to hold community events and offer plants at celebrations like Pow-Wow.

How a Chumash nursery is preserving culture, and extreme heat is putting expectant moms at risk

The Santa Ynez Band of Chumash is cultivating native plant species in its nursery — as a way to preserve its indigenous culture.

Extreme heat is causing preterm pregnancies and even infant death in some cases.

Farmworkers can vote from home if new CA bill passes. Critics say this would kill jobs

Farmworkers would be able to remotely vote in union elections — if a new bill gets Gov. Gavin Newsom’s signature. Advocates say the legislation would ward against...

Why overseas orders are taking so long to arrive, and LA gets new movie museum Press Play with Madeleine Brand

END_OF_DOCUMENT_TOKEN_TO_BE_REPLACED
KCRW's Pledge Drive: IF we can raise $20,000 TODAY, we’ll unlock an additional $25,000 for KCRW thanks to a generous commitment from KCRW Champion Irene.
GIVE NOW
Give Now