In Long Beach, a lifeguard tower that was painted in rainbow colors for LGBTQ-plus pride was burned down last week. Now a city once praised by the Human Rights Campaign for its LGBTQ-friendly laws and policies is grappling with the implications. The incident was also the first time in several decades that a lifeguard tower was burned in the city. KCRW speaks with Long Beach Mayor Robert Garcia.

KCRW: What’s the latest with the investigation? Do we know how this happened, and was it intentional?

Robert Garcia: “The investigation itself is ongoing. And so we won't know the complete results of that for some time, but I think that what we do know is pretty clear. We have not had a lifeguard station burn down in over 70 years, we've gone all the way back to the 1950s. And the one lifeguard station that has burned down in these in the last few decades is the one that was painted for pride in rainbow colors in just the last year. And so these things are hard to burn down. And so it's been pretty clear to us what happened, and the community is upset as am I.”

Who is behind the rainbow tower? Give us a little history of how it became painted and the gay pride aspect of it.

“The tower itself was actually painted by the lifeguards. … LGBTQ-plus lifeguards themselves took the initiative. And to support each other and to support the community, they went out and painted the tower. Last year, it was amazing to see when it was done. It's a very popular place for the community and for tourists and folks taking pictures. And so it's something that's, for us, a point of pride. Long Beach is a very kind of pro gay, progressive community. And so we loved it, and they're probably more upset than anybody else.” 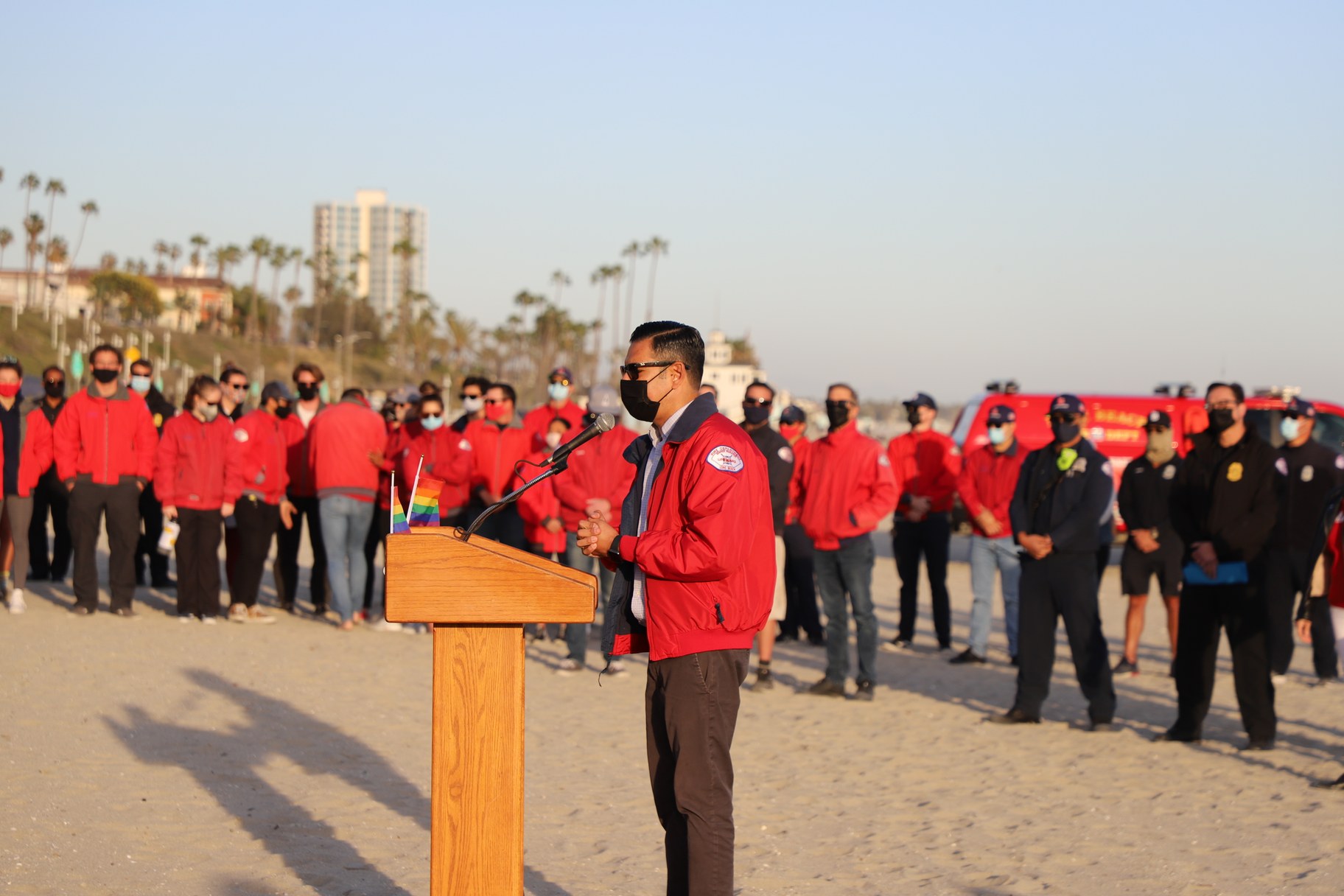 What was your personal reaction when you heard about it?

“I was both upset and sad. I mean, obviously, as a gay person myself, but also as mayor, it's really unfortunate that someone or some folks would be so hateful, and burn something down that way that represents a symbol in the city.

But it's a reminder that as forward thinking and inclusive as a community is and the state is, a lot of people are not supportive of the LGBTQ-plus community or about equality.”

The story received some national attention. Are you concerned that it could negatively affect Long Beach's image as friendly to the LGBTQ-plus community?

“I'm not because I think that folks know that the city is very forward thinking. We have one of the largest LGBTQ-plus populations in the state. We're constantly ahead of the game when it comes to inclusivity laws and have been for many, many years.

In fact, I think what's more important is the reaction that communities had. And I think that's been covered as well. And the community has completely come together and renounced what happened.

And we're already replacing the tower. It will be repainted and redone and rebuilt. And we're going to redo it even bigger and better than before. So I think, if anything, I think it shows the strength of the city and our support for diversity and inclusivity.”

Are you doing anything differently in terms of community outreach or policing? Do you think this is maybe a one-off incident? Or maybe this could be a pattern?

“Our lifeguards and our police are obviously taking some additional note, and kind of looking at it a little bit more, but we have not had a history of this type of activity in the city. Again, it's been 70-plus years since we know of that this has happened to a lifeguard tower. So we're pretty optimistic that this is a one-off kind of hate incident. But we're still vigilant and most importantly, people are themselves more aware and are taking a look, and I think when the new one comes on board, we're absolutely going to pay a little closer attention. And I think the lifeguards are going to as well.