Inside ‘Bernie’s Coffee Shop,’ a gathering place for activists and protesters On the northwest corner of Fairfax Avenue and Wilshire Boulevard is the historic Johnnie’s Coffee shop. This classic Googie building has become one of those places you drive by and do a double-take because something about it seems unusual.

Inside, the general vibe of the place is post-apocalyptic. The windows and walls are nearly all covered with posters and signs, remnants of protests and street marches. It feels like some sort of revolution happened that didn’t go well, then everyone fled, leaving everything behind like the 1950s cash register and milkshake machine that sit there gathering dust.

In 2000 Johnnie’s closed its doors. But the diner wasn’t bulldozed and replaced by condos. A new business didn’t move into the space.

Instead Johnnie’s spent the next 16 years frozen in time, becoming a filming location for movies including “The Big Lebowski” and “Reservoir Dogs.”

But then it transformed again.

Now it's a gathering place and workshop for a network of progressive activists, who originally worked to elect Bernie Sanders.

The space recently has expanded beyond Bernie Sanders supporters. The list of groups who use it as a community center includes Extinction Rebellion, Me Too International, Black Lives Matter, Humanity First and at least a dozen others. 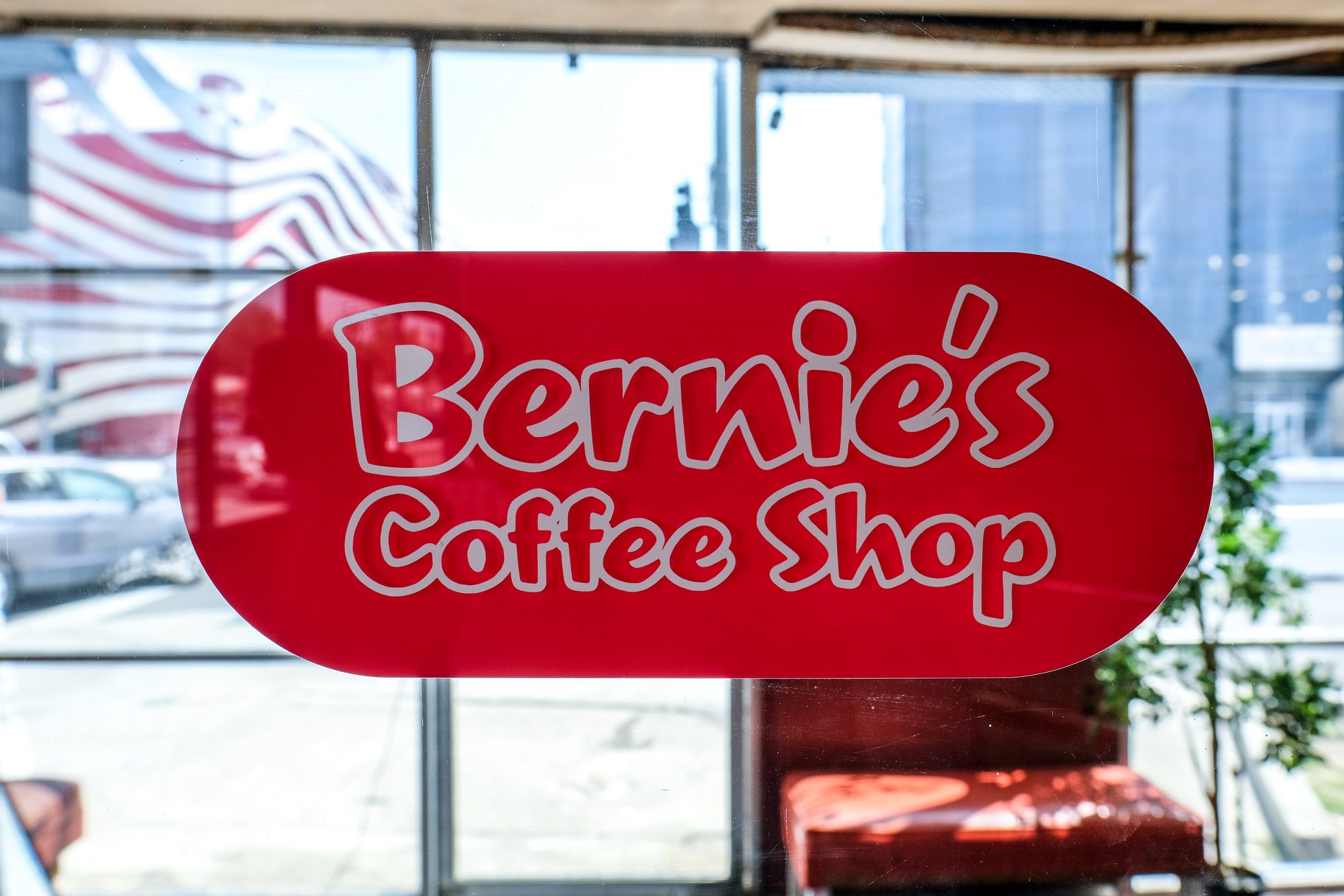 The Johnnie’s building is owned by the Gold family, which started the 99 Cent Only chain here in Los Angeles.

Howard Gold was a big Bernie Sanders supporter and one day he was talking with his brother who was said, "you know we’ve got the Johnnie’s Coffee Shop property just sitting there doing nothing. Maybe the Bernie people would want to use it?"

So Howard reached out to some Bernie supporters he knew. “I told them about it and I didn't hear anything for like a month or two and then somebody finally called me back. And I guess the rest is history,” Gold says. 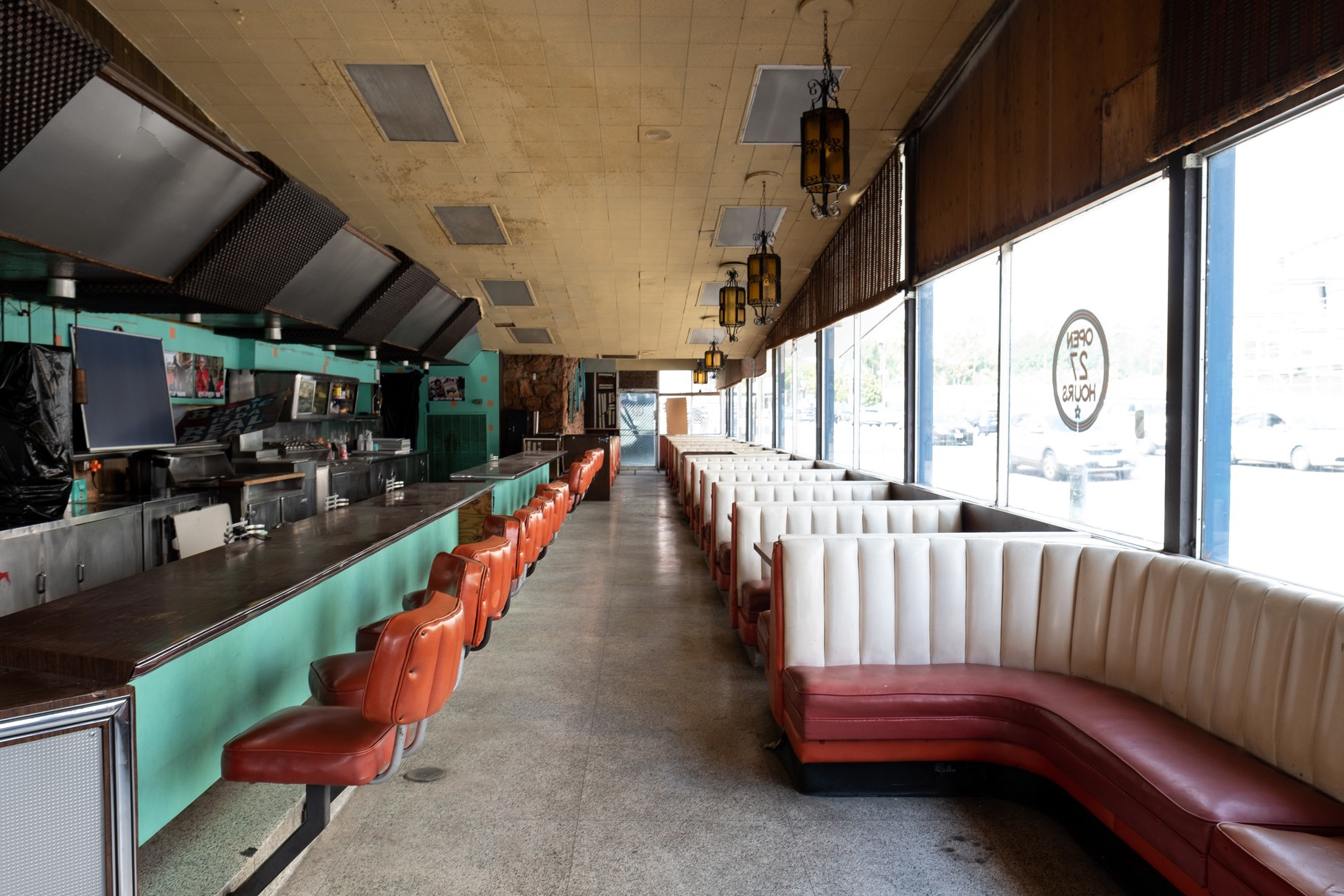 Because Johnnie’s was a filming location for the last 20 years, it has remained frozen in time, like a life-size museum exhibit of 1960s Los Angeles diner culture. Photo by Amy Ta. 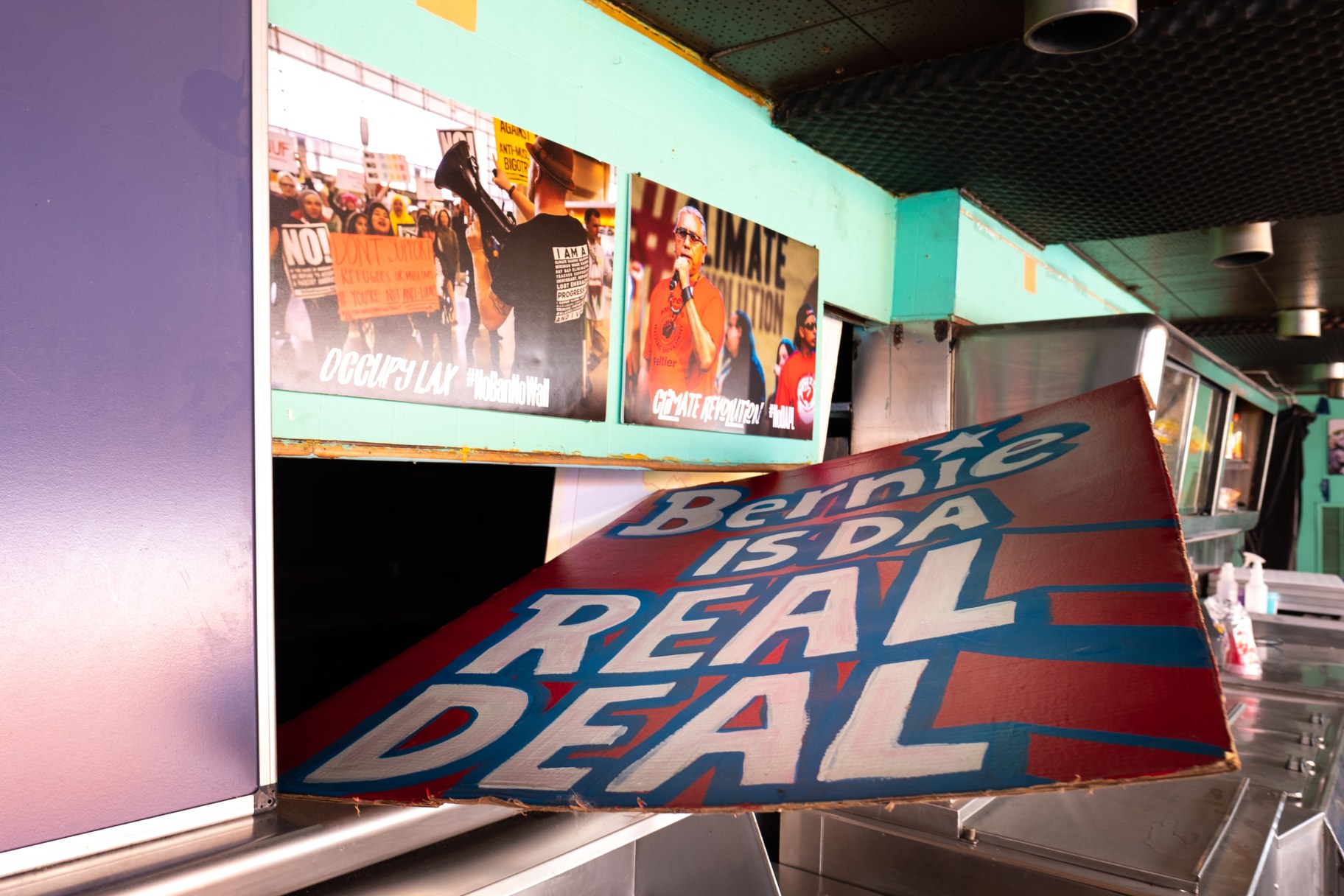 Since the 2016 election Bernie’s has become a community space for a wide array of progressive activist groups. Photo by Amy Ta. 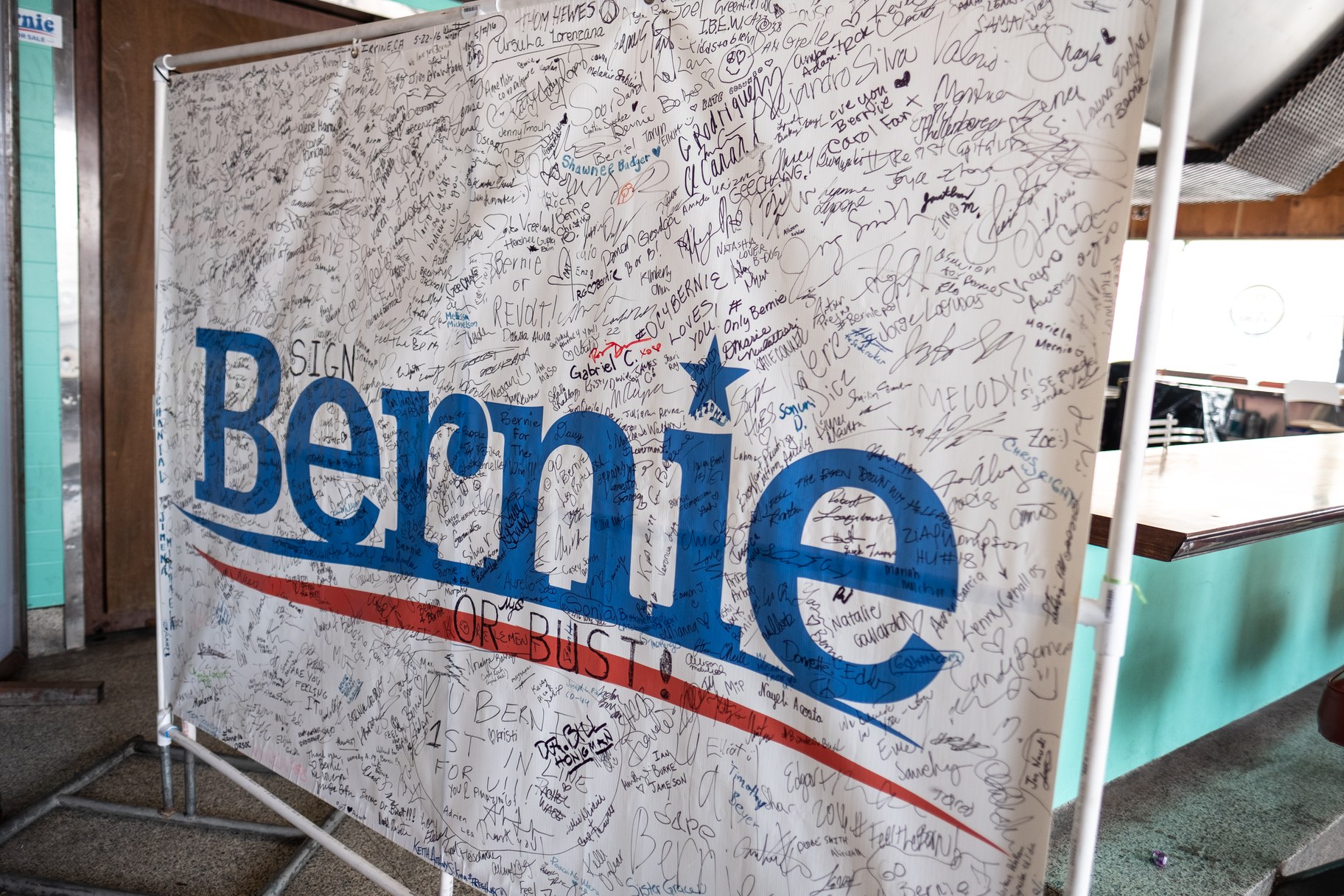 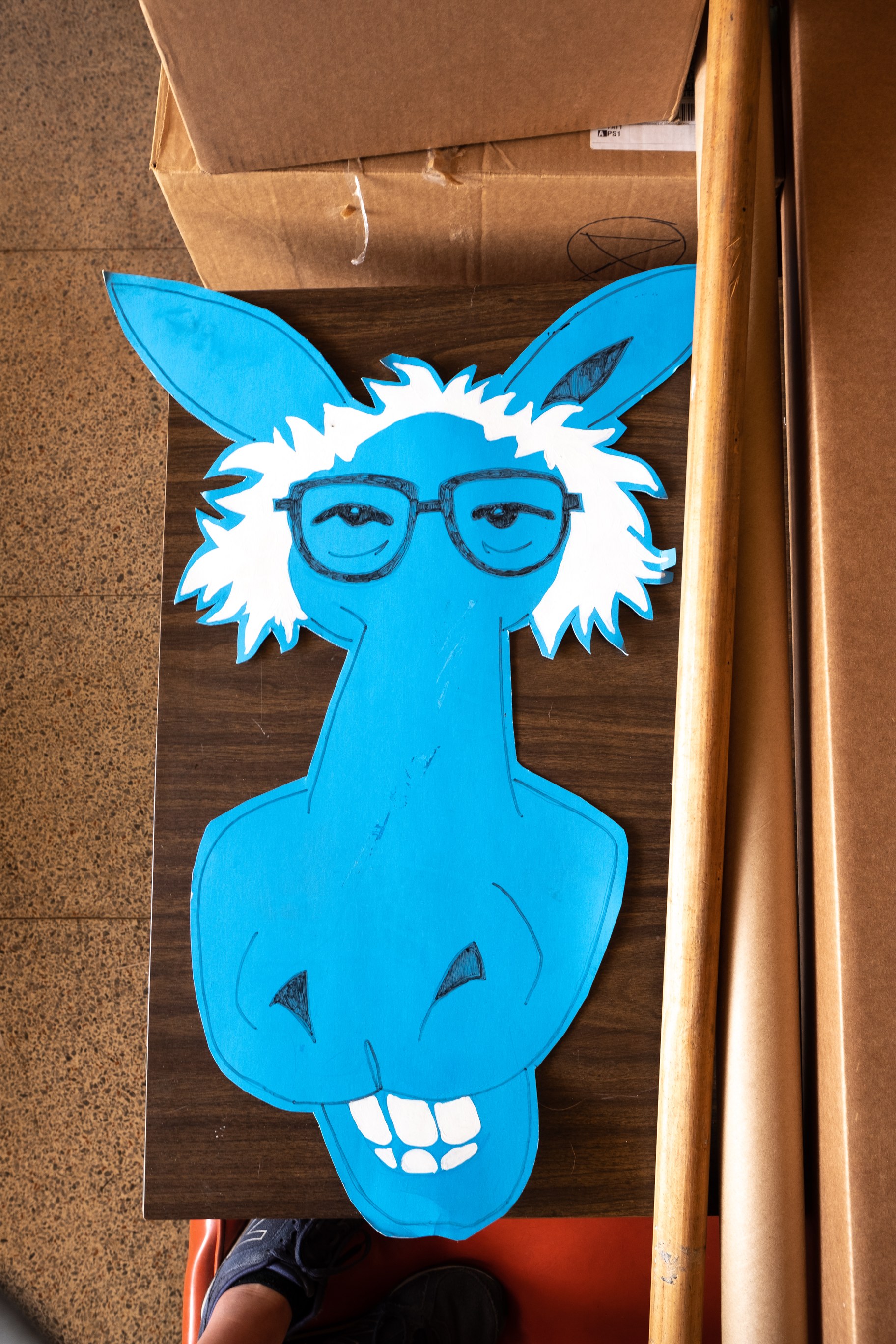 Over the last few years as a hub for left wing activist "Bernie’s Coffee Shop" has slowly accumulated a large collection of protest signs, posters and artwork used in various marches and protests since the 2016 election. Today the posters cover most of the wall and window space of the restaurant. Photo by Amy Ta. 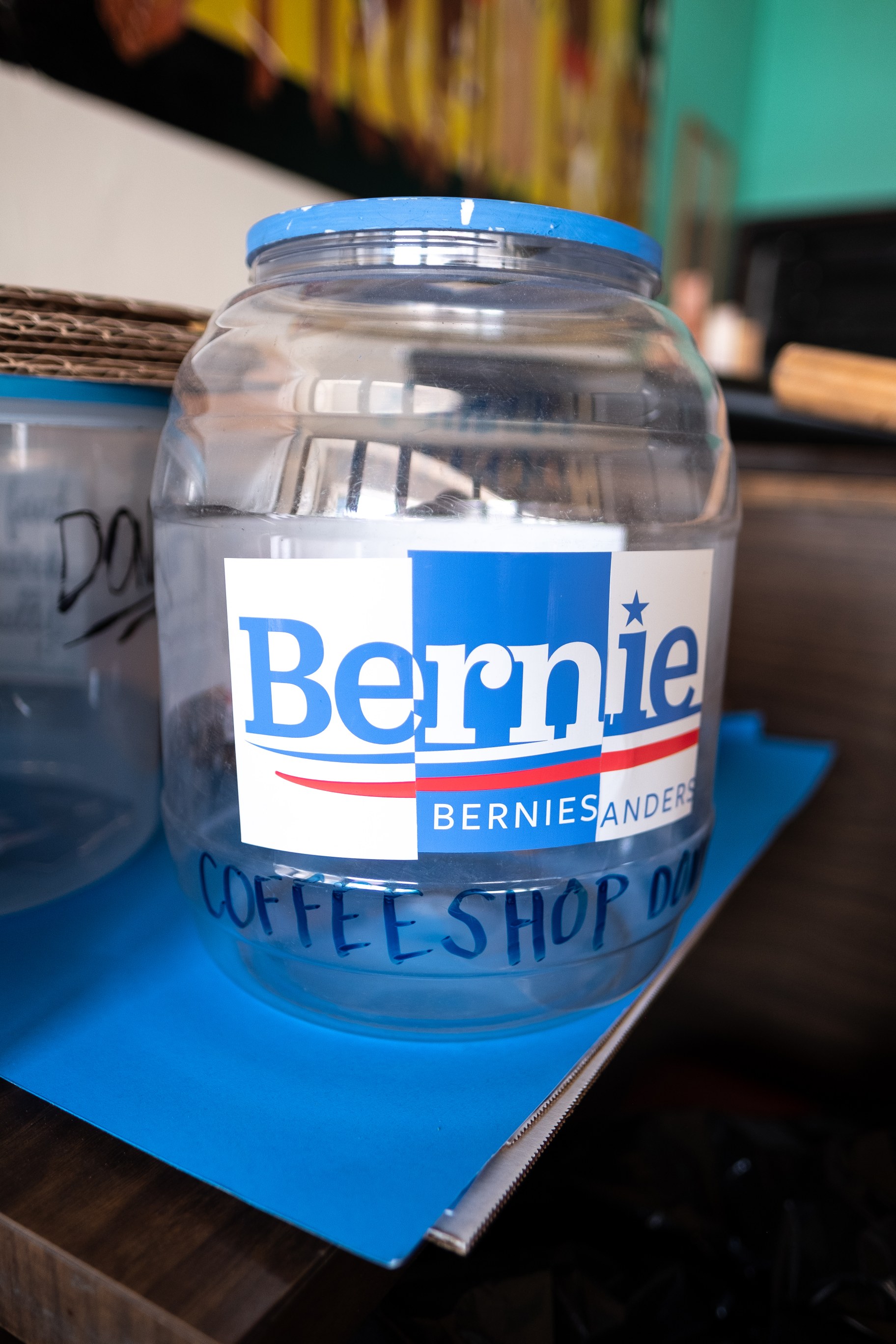 Bernie Sanders’ supporters are gearing up for the 2020 presidential election and plan to use the coffee shop as a hub for organizing and phone banking as they did in the previous election. Photo by Amy Ta. 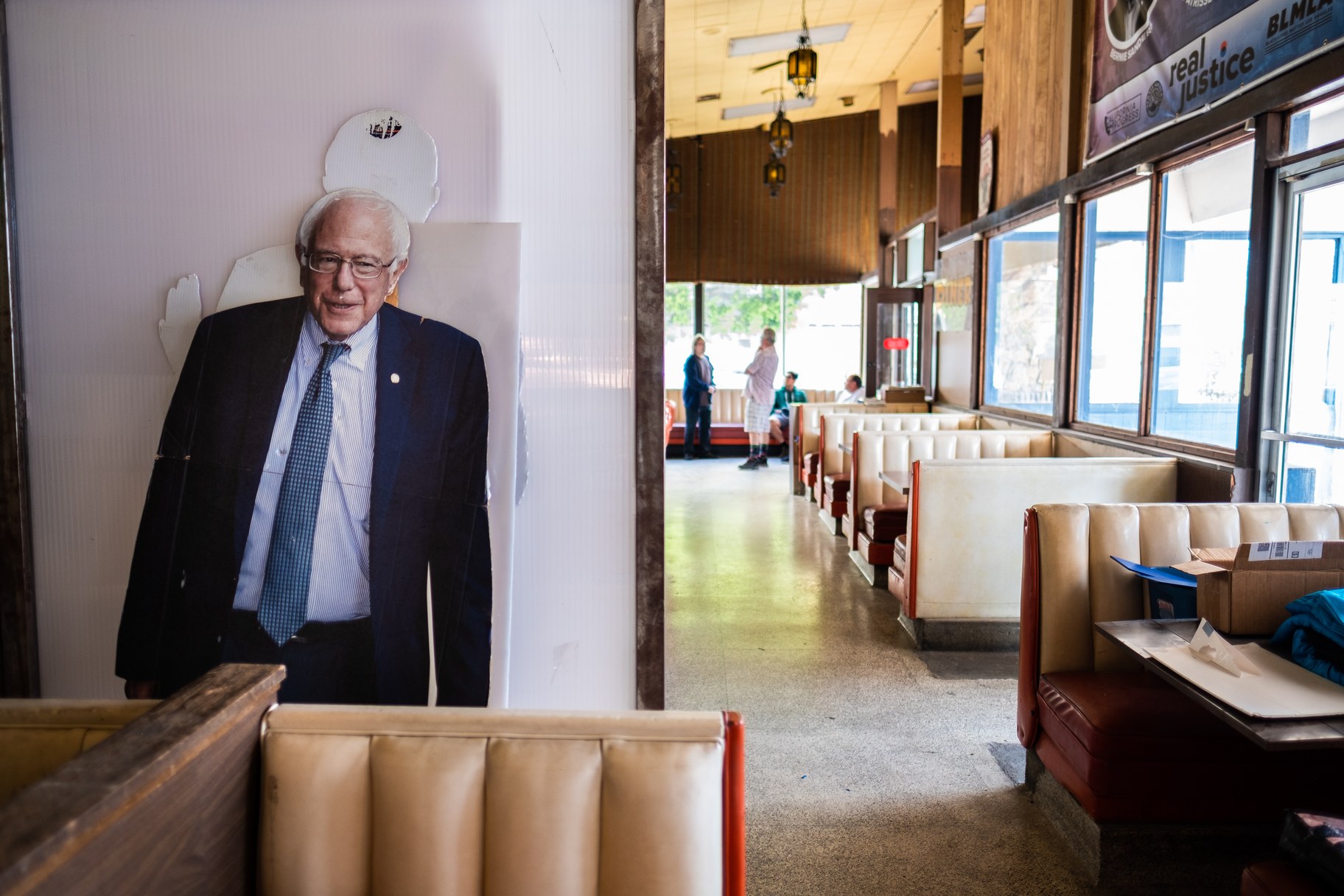 During a recent visit to the shop, a cardboard candidate Bernie Sanders just happened to be hanging out by the back booth. Photo by Amy Ta. 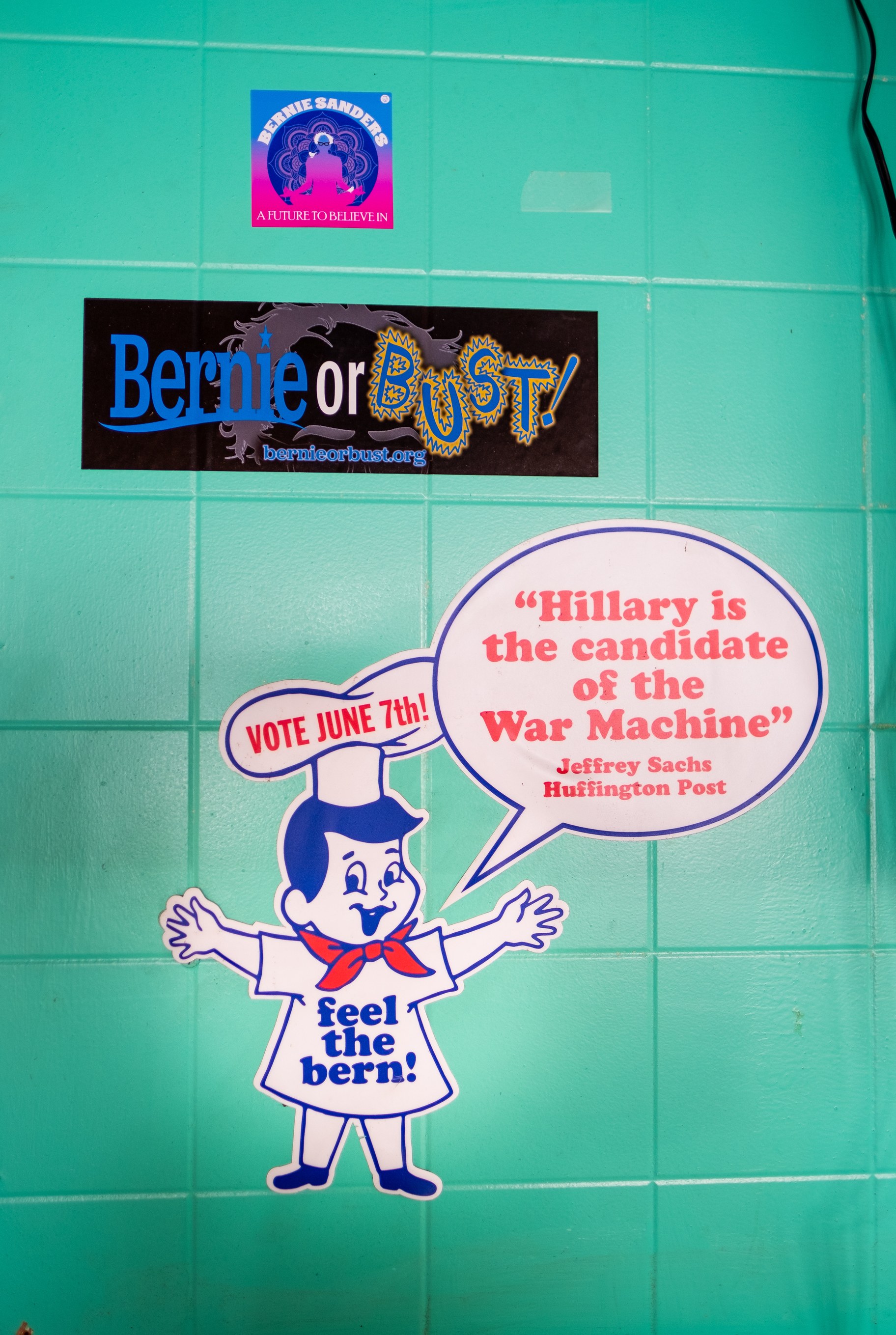 One of the owners of the coffee shop, Howard Gold, had this sign made to show his support for Bernie Sanders in the 2016 primary. Photo by Amy Ta. 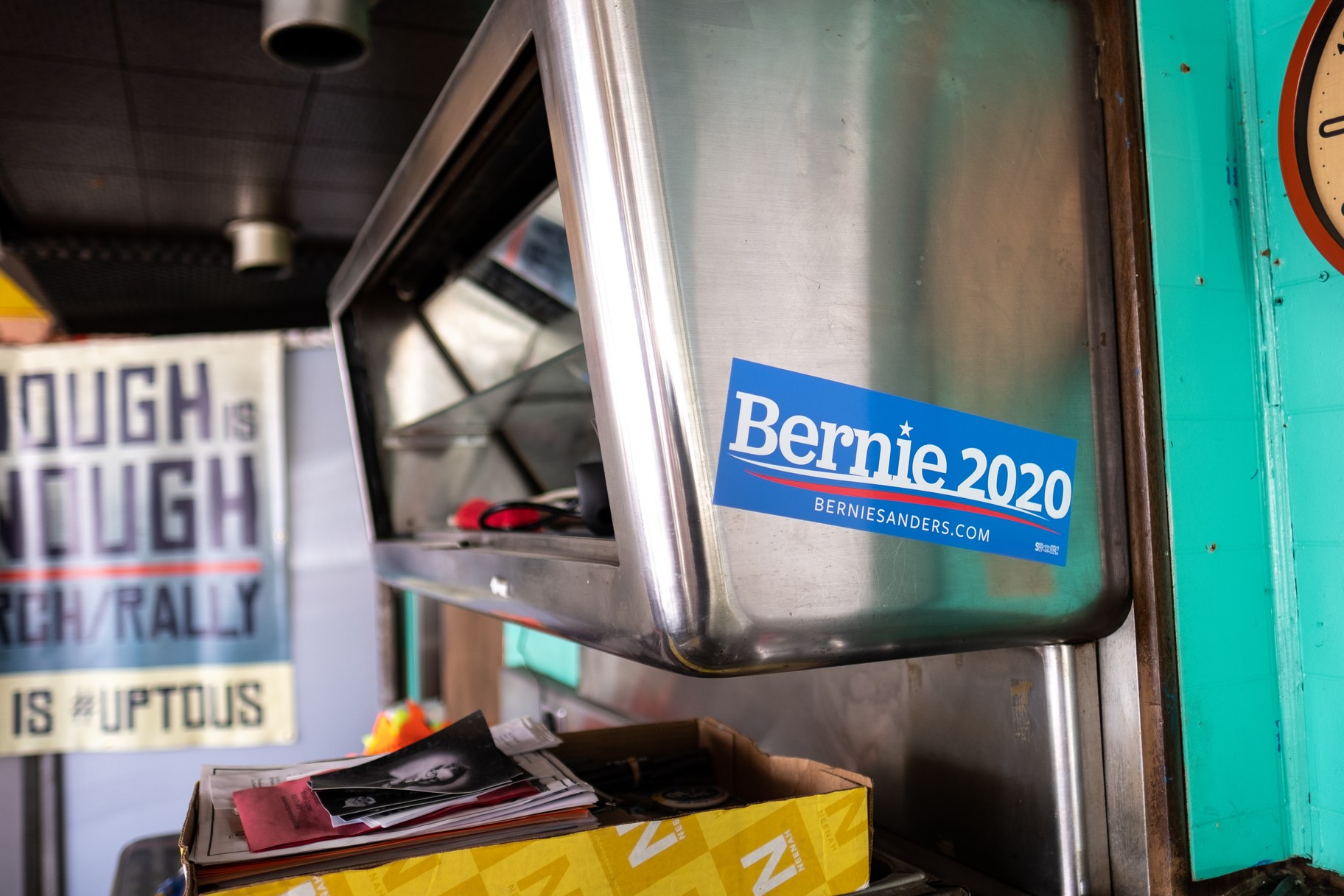 Once again, Bernie Sanders supporters plan to use Bernie’s Coffee Shop as a hub for organizing and phone banking. Photo by Amy Ta. 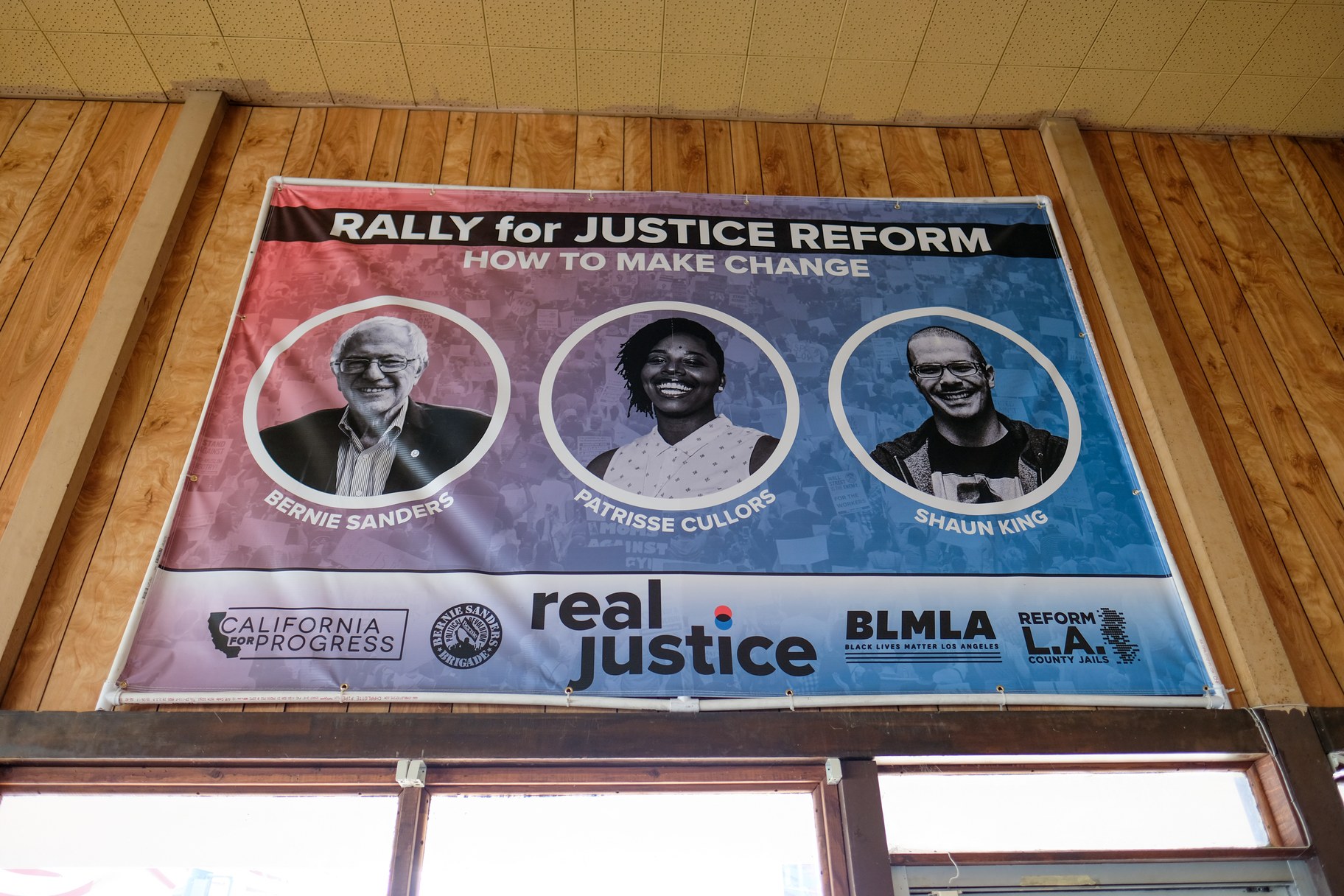 A wide array of progressive activist groups have used the coffee shop including Extinction Rebellion, Youth Climate Strike, Black Lives Matter, Me Too International and many others. Photo by Amy Ta. 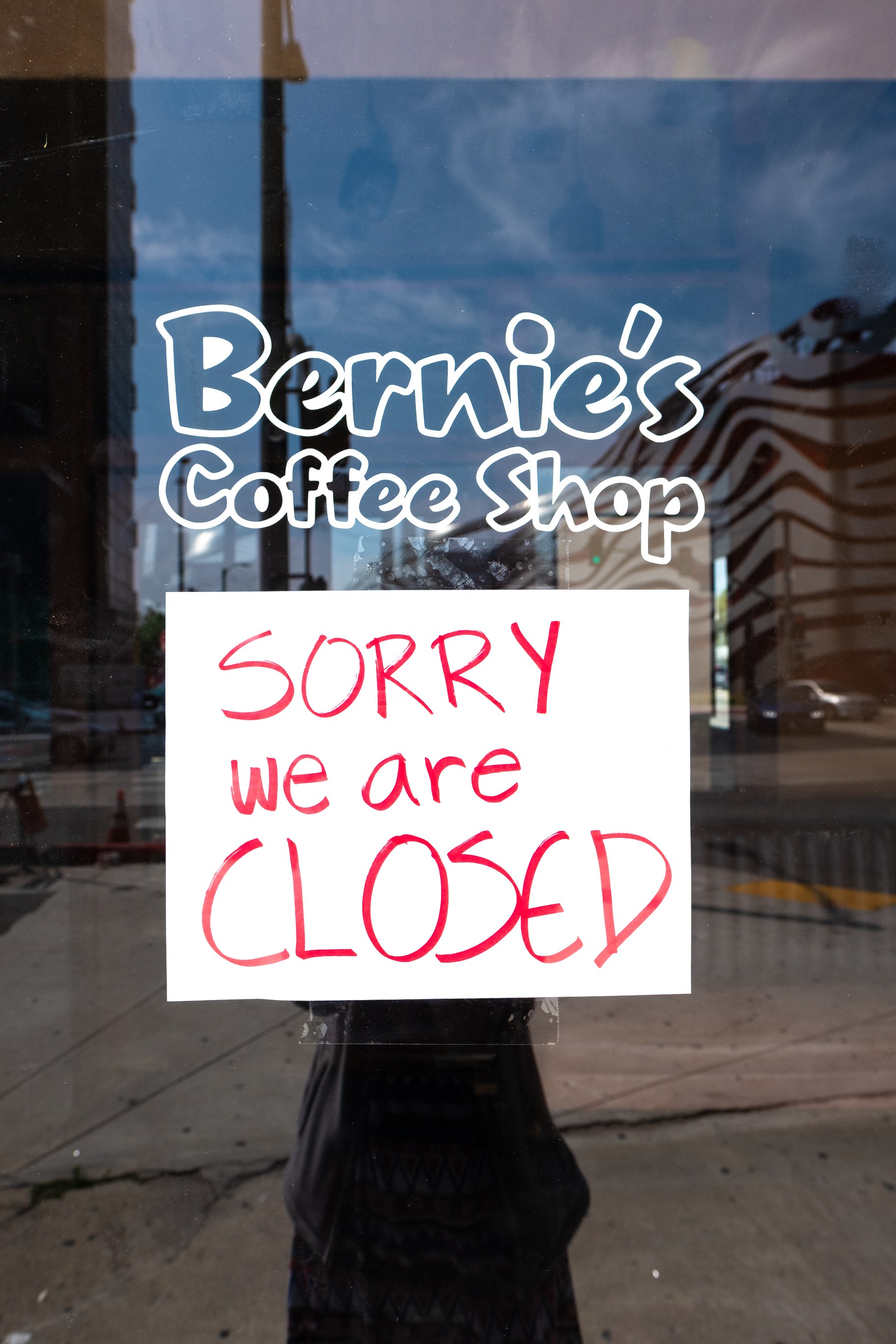 Though the exterior and interior remain the same since it was a diner, Johnnie’s has been closed for business for the last 20 years. Photo by Amy Ta.

Inside ‘Bernie’s Coffee Shop,’ a gathering place for activists and protesters

On the northwest corner of Fairfax Avenue and Wilshire Boulevard is the historic Johnnie’s Coffee shop. This classic Googie building has become one of those places you drive...

The XFL returns to LA