The shores along Ventura were busy Saturday afternoon, but people maintained social distance while walking around and enjoying the first summery weekend of 2020. Photo by Matt Guilhem.

Temperatures felt more like August than April over the weekend, and tens of thousands of people from around Southern California decided they had enough isolation in their homes. They took their coolers and beach chairs to the sand in Orange County or Ventura County, which stayed open after controversy.

Meanwhile, the coastline of Los Angeles County remained closed. Malibu, on the northwest border of LA County, actively told locals and visitors that they should avoid the sand. The city tapped the Emergency Alert system to spread the word.

“[It’s] like an Amber Alert. It will hit every cell phone in the geographical area,” said Malibu Mayor Karen Farrer. “It’s a loud, buzzing, pretty annoying sound that gets your attention.”

Heading north along the coast, the beaches in Ventura County were under a so-called “soft-closure.” Authorities there wanted people to be active along the shore. Playing football, swimming, or boogie boarding were fine. Sunbathing or sitting with a book under an umbrella were discouraged. 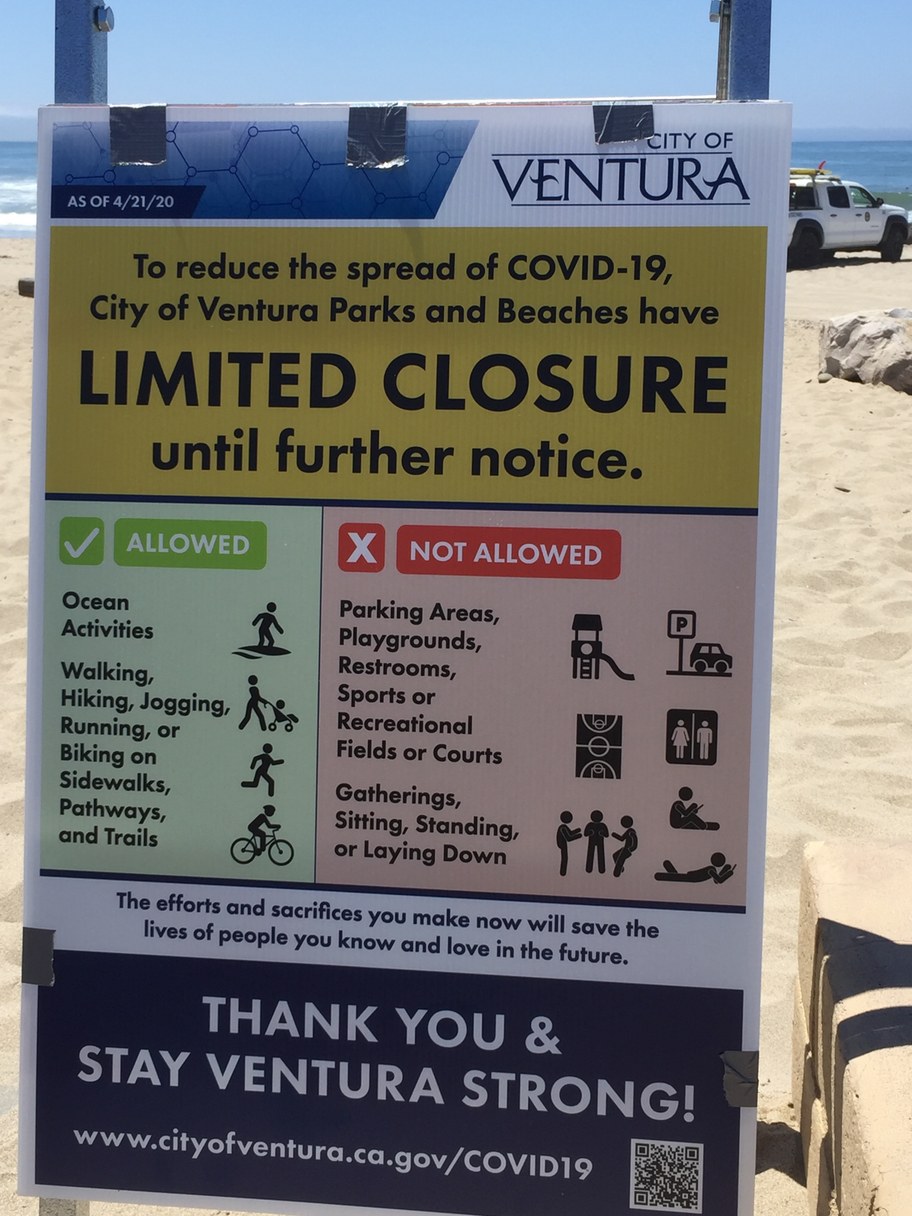 Ventura beaches were technically closed. But people were allowed to run, ride bikes, and generally move around. They were prohibited from sunbathing or lounging under an umbrella. Photo by Matt Guilhem.

Dena Bellman works for California State Parks, which oversees San Buenaventura Beach. She said safety officials made contact with over 3,000 people on Saturday, letting them know to stay active.

“We had a lot of activity – a lot of ball playing, a lot of water activity,” Bellman said of beachgoers on Saturday. “I think people were really excited to be able to have that opportunity to get into the water. … People were really taking the spirit of the order into their understanding and how they were practicing that in the park. We were pretty happy with it.”

Taking in the scene of Schoolhouse Beach in Ventura, the coronavirus appeared to be the last thing on many people’s minds. Families were laughing together, kids were playing in the water, and face masks were almost non-existent.

The most difficult thing people appeared to be dealing with was parking. Beachside parking lots in Ventura County and Orange County remained closed, forcing visitors to find street parking in nearby neighborhoods and causing some headaches for locals.

The sun was shining bright in Ventura, but in Port Hueneme, near Oxnard, the fog rolled in early and stuck around for the day. It didn’t dampen the excitement of the Orjuela family. They left temperatures in the 90s in Simi Valley to get in some beach time. 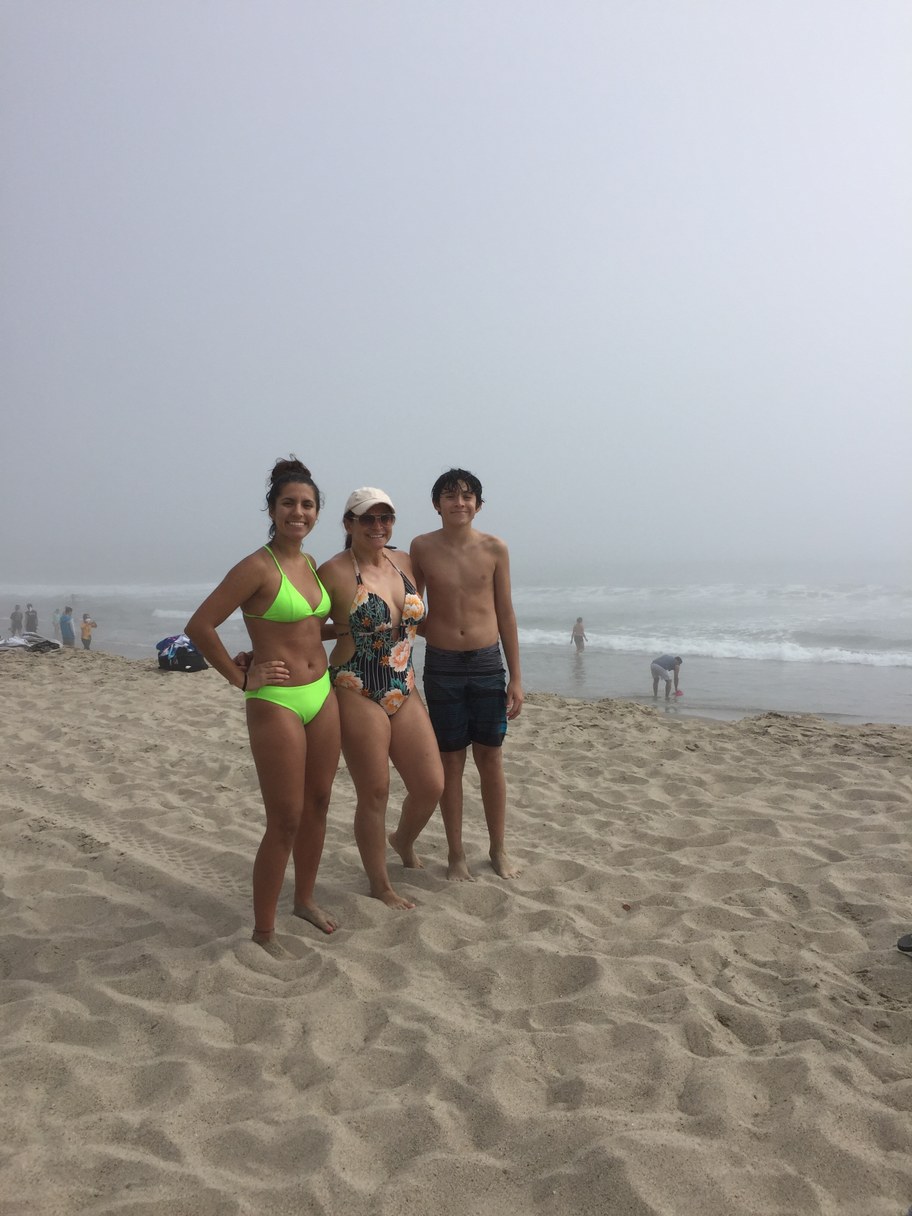 The Orjuela family enjoyed a (foggy) day at the beach in Port Hueneme. They drove from Simi Valley to escape 90-degree heat and spend the afternoon boogie boarding at Hueneme Beach Park. Mom Sandra said she felt safer in the fresh, ocean air with other people several yards away than running errands that put her inside with others. Photo by Matt Guilhem.

Sandra Orjuela, the matriarch of the family, said she not only felt safe at the shore, she felt safer there than most other places.

“I feel more risk at the grocery store than here, to tell you the truth,” Orjuela said. “Because at the grocery store, everyone is there. Here, I mean the closest person is like 10 feet away from me. The other one is like 20 feet, so we feel really safe.” 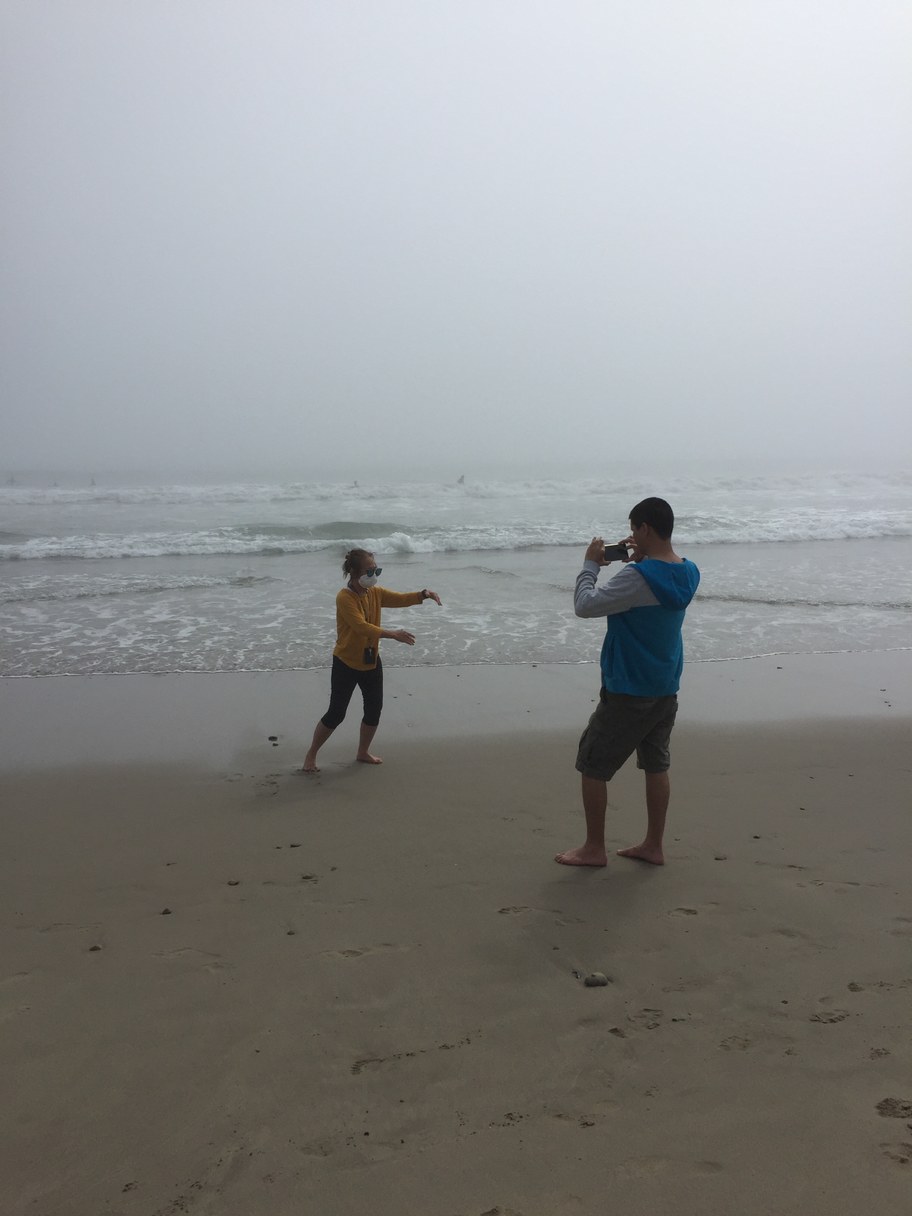 Tai Chi instructor Susan Kent performed several movements in the surf and fog at Hueneme Beach Park on Saturday as her son filmed her. Kent was surprised to see a fair number of people on the sand. She speculated many had come from out of town to enjoy the cooler weather and the welcome change of scenery from the new normal of stay-at-home orders. Photo by Matt Guilhem.

Even though the family was breaking one part of the stay-at-home order by traveling to hit the shores, Orjuela’s daughter, Stephany Orjuela, said they brought masks to be safe. However, they weren’t wearing them.

“We left them in the car, actually,” Stephany said with a laugh. “They’re in the trunk of my car.”

Hot weather drove many Angelenos to the beach over the weekend, despite admonitions to stay home. In Ventura County, very few beachgoers wore masks, and many said they felt...

Unlike LA County, some of Orange County’s shores were open to beachgoers over the weekend. Images of packed beaches, such as Huntington Beach and Newport Beach, flooded...

Navy captain gets fired over COVID-19 whistleblowing. Officials say he should be reinstated

Captain Brett Crozier was removed as commanding officer of the USS Theodore Roosevelt in early April for sounding the alarm over a coronavirus outbreak on his San...