With its warm desert air and sleek mid-century architecture, Palm Springs has been a getaway for generations. Coronavirus doesn’t seem to be tarnishing its reputation for sun, fun, and escape. Photo by Matt Guilhem/KCRW

On a fall evening in Palm Springs, the weather is perfect, the patios along downtown’s Palm Canyon Drive are packed (at a safe distance), and people are at ease as they enjoy what would’ve been a typical Saturday night before COVID-19. 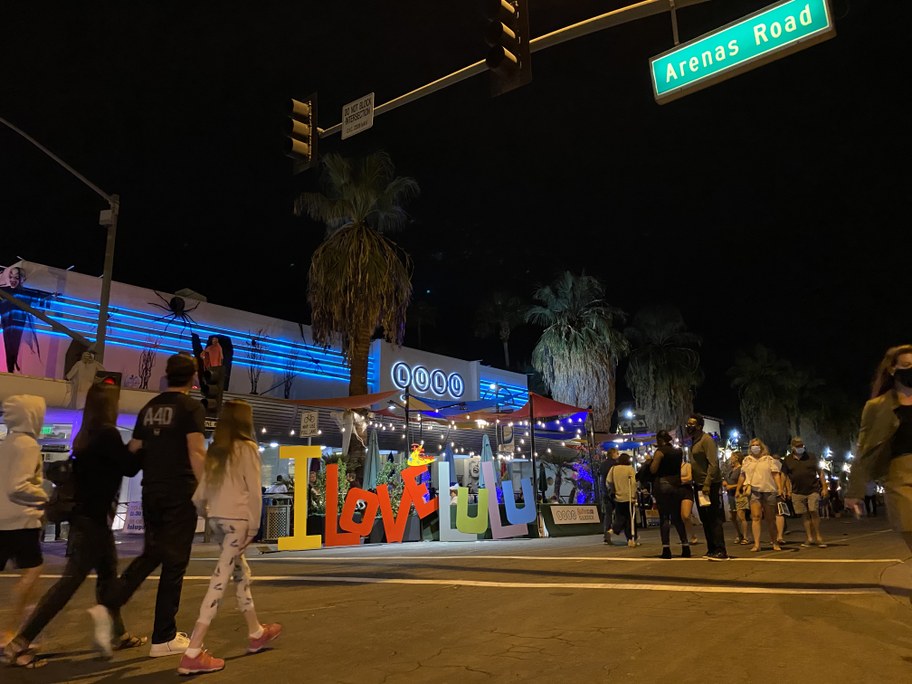 On a fall evening in Palm Springs, locals and visitors fill Palm Canyon Drive, which was briefly shut to cars and turned into a pedestrian promenade. Photo by Matt Guilhem/KCRW

“I’m like the quarantine queen, and I don’t go out of the house,” Sanders says with a clear smile behind her mask. “[The waitstaff] were very, very safe. They made sure that we had our mask on when our waiter served us and when they refilled our water. I look at it from the standpoint: As long as I have my mask on, I think I’m going to be okay.”

Sanders is among the millions of Southern Californians who live within driving distance of the desert oasis and are just what the city’s economy needs heading into fall. As daytime highs drop from 100-plus to the mid-70s, the hospitality sector is doing better than you might think with the pandemic raging. However, it’s not all sunshine.

The busy patios and full sidewalks are evidence that people want to get out of their homes and spend a few hours — or maybe a weekend — reliving the simple pleasures of a time before coronavirus.

The Palm Springs businesses able to capitalize on that need for an escape have adapted to the times. Their pandemic pivots have kept a steady stream of visitors heading here.

Near the entrance to town, along Highway 111, is the Cole Hotel. It ticks off all the boxes for a desert escape: hip mid-century architecture with bright colors, swaying palm trees, and a mellow pool perfect for splashing in or sipping by. 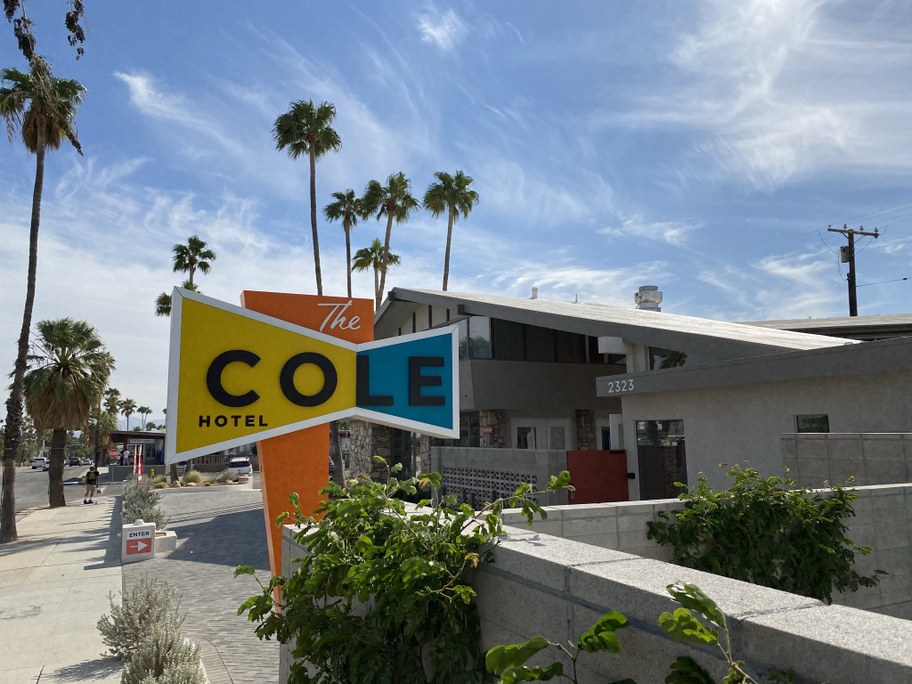 In a past life, the Cole Hotel was the Bahama Hotel. The original establishment opened in 1959 and featured some design flourishes by noted desert modern architect Hugh Kaptur. Today, the Cole is a 21+ hotel that nods to Palm Springs’ mid-century heyday. (Photo: Matt Guilhem/KCRW)

As a few guests bronze under the autumn sun poolside, assistant general manager Molly Madigan says the early days of the hotel were mired in uncertainty.

“The opening went really well. It was kind of a soft opening in February,” Madigan recounts. “We did pretty well, we did have people coming in. … Right before that pandemic hit, we had the normal crowds, and then about two weeks later everything shut down.”

That’s right — just two weeks into the life of the Cole Hotel, hard COVID closures forced it to shutter until June. Madigan says they used that downtime for a months-long strategy session about how to operate in this strange new reality.

“It’s just been nuts,” says Madigan. “You know, of course it’s kind of hard both professionally and personally to see how much businesses are affected.”

Before COVID-19, hospitality meant unique touches and tailored personal service. While that spirit remains, in practical terms it’s been turned upside down. Madigan says the hotel goes the extra mile by sparing the touching and limiting interactions. 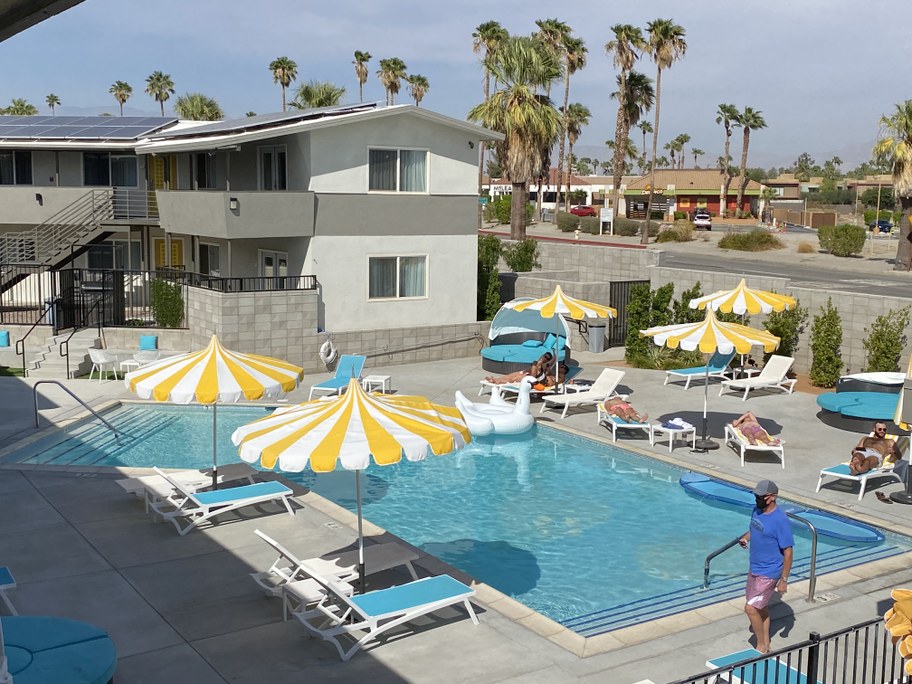 Guests at the Cole Hotel relax poolside. With an average of 350 sunny days a year, Palm Springs has been a favorite destination of people looking to escape winter’s chill for decades. Photo by Matt Guilhem/KCRW.

“Everything is virtual so you get your room information. You can order from the bar and the restaurant directly through a link that we give you,” Madigan explains. “It’s a little something that we show that we care about you, and with everything that’s going on, that you can trust staying here.”

Madigan says weekends at the Cole Hotel have been unexpectedly busy, even during the blazing hot summer. Vacation rentals in Palm Springs also aren’t hurting — they went like gangbusters this summer. In spite of the pandemic, they’re bringing in as much money or even more in occupancy taxes compared with last year.

That’s good news to the city’s mayor, Geoff Kors. When the COVID crisis was just taking off, a shortfall of tens of millions of dollars was expected for this fiscal year. Now, the mayor says things don’t look so dire.

“We’re thinking we’re going to be much less reduced than we thought,” Kors says. “So, yes, it’s a loss, there’s definitely lost revenue when you have this situation. But sales tax has been 80, 90% of what it was a year ago. So we're optimistic, but we’re not going and spending a lot of the money because we need to see what happens.” 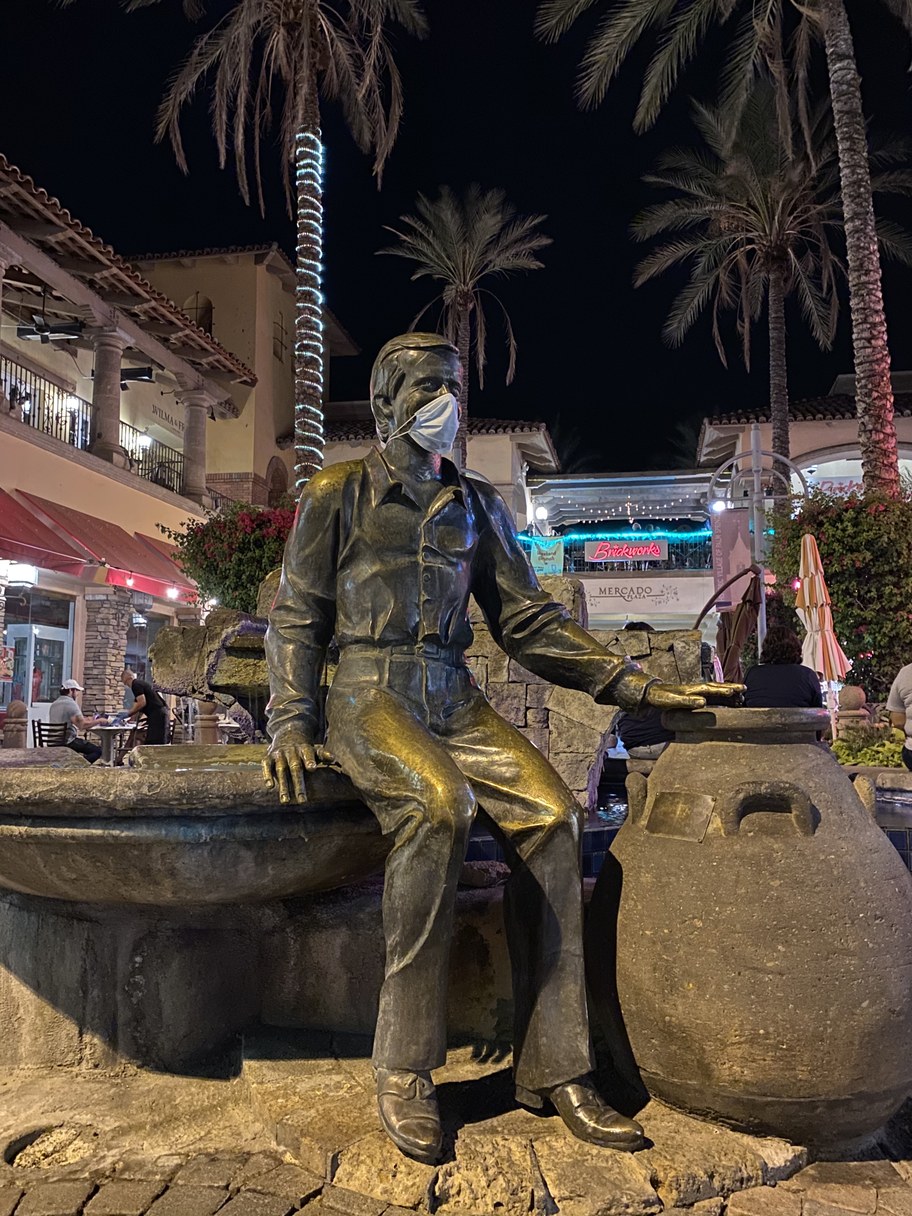 At a plaza in downtown Palm Springs, even a statue of former mayor Sonny Bono does its part to curb the spread of coronavirus. Photo by Matt Guilhem/KCRW

The city of 48,000 relies on an economy built on tourism. With not a lot of people flying at the moment and getting in some mid-autumn pool time, the city has shifted its focus to the drive markets — places that can reach the desert by car. The head of the Palm Springs Bureau of Tourism, Rob Hampton, says 2020 has changed what’s considered “driveable.”

Apparently a roughly 800-mile car ride from Pocatello, Idaho is now totally fair game. And as the city’s marketing strategy shifted over the summer to reflect the pandemic, Hampton says the people showing up did too.

“Not only were people just coming into town for vacation, but there was also that business part, where people can work anywhere. A lot more organizations are allowing that and they’re choosing to come to Palm Springs,” says Hampton. 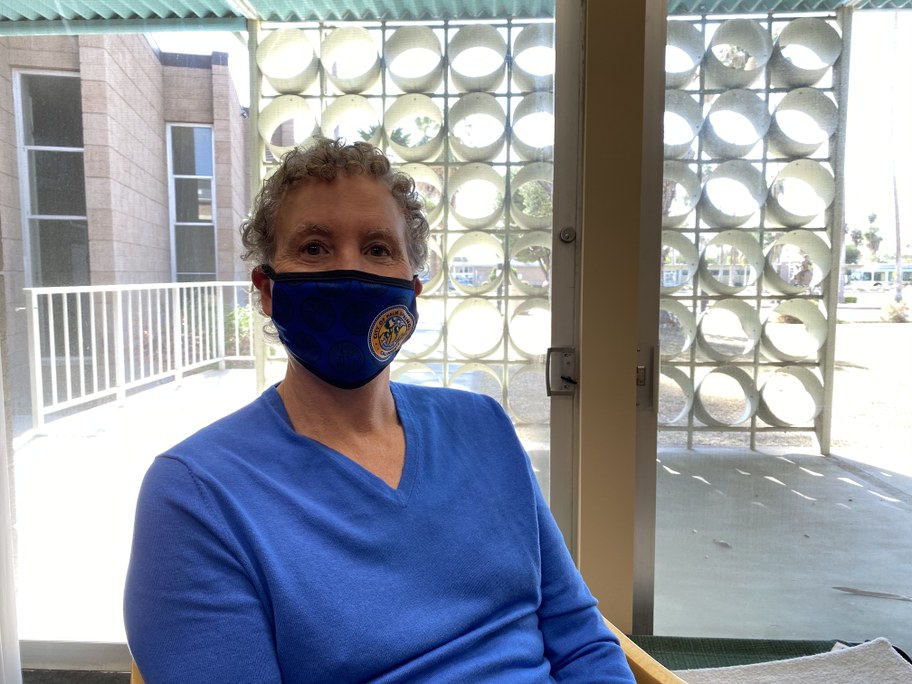 Palm Springs Mayor Geoff Kors has taken a tough, no-nonsense approach to coronavirus safety protocols. The city has implemented stricter mask requirements than Riverside County, including requiring diners to put a mask on when restaurant servers approach them at table. Photo by Matt Guilhem/KCRW.

“With school being virtual, there are a lot of folks who are here with their kids because they could be anywhere,” Kors says. “And so a lot of those folks did come to Palm Springs. Some just for a weekend, but we’re seeing longer too, a week, two weeks, even months. Because they can be here, outside, with a pool, with enough bedrooms that they can make an office for one, and enjoy great weather and not be nervous or uptight in a smaller place wherever they were living.”

These COVID transplants may be filling up the vacation rentals, and by extension, city coffers. But they’ve had a limited impact on another crucial part of the hospitality sector — restaurants.

In downtown Palm Springs, Lulu became an immediate fixture almost as soon as it opened in 2011. Serving an eclectic mix of California cuisine spread across multiple menus and offering a “see and be seen” patio, the cavernous restaurant could seat almost 500 people pre-pandemic. Now, it’s made some dramatic changes. 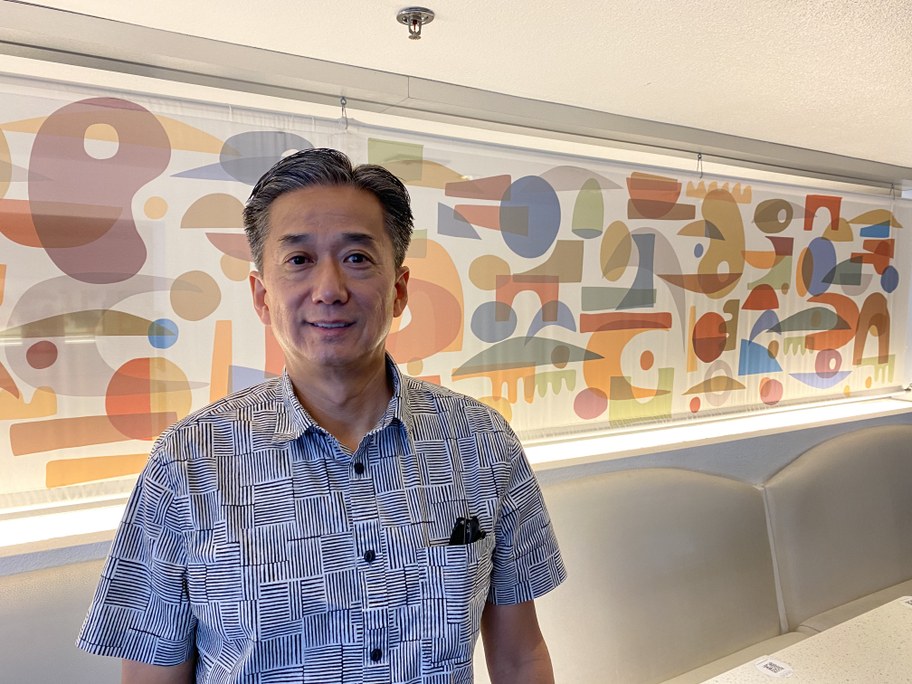 John Shay has worked in the hospitality industry for more than 20 years. He says he knew from the initial coronavirus shutdown in March that the pandemic would both be defining and a moment of reckoning for restaurants. He says some long-standing Palm Springs eateries have folded because of the pandemic. Photo by Matt Guilhem/KCRW.

Inside Lulu, the empty tables are spaced out and there’s plexiglass between booths. Shay says they even upgraded the air filtration system. In September, Riverside County entered the red tier of the state’s reopening framework. That meant limited indoor dining could resume. Shay was hopeful, but the county’s subsequent slip back into the most restrictive purple tier, which prohibits eating inside, poses a threat.

“You know the indoor dining got us back to a level where we were sustainable,” says Shay. “And now we’re faced with the challenges again. And with that indoor closure, we’re now looking at potentially cutting hours or reducing staff.”

While the safety of the staff and guests is paramount, Shay is frustrated with the state’s reopening framework for a very simple reason.

“Our lives are turned upside down by reacting to what the state’s going to do next,” Shay says with some exasperation. “You can’t plan going forward. I mean, are we going to be open Thanksgiving for indoor dining or are we not?”

Shay says the unexpectedly decent summer season the hotels saw passed over his restaurant because, at the time, it was only offering outside dining in the searing Palm Springs heat. 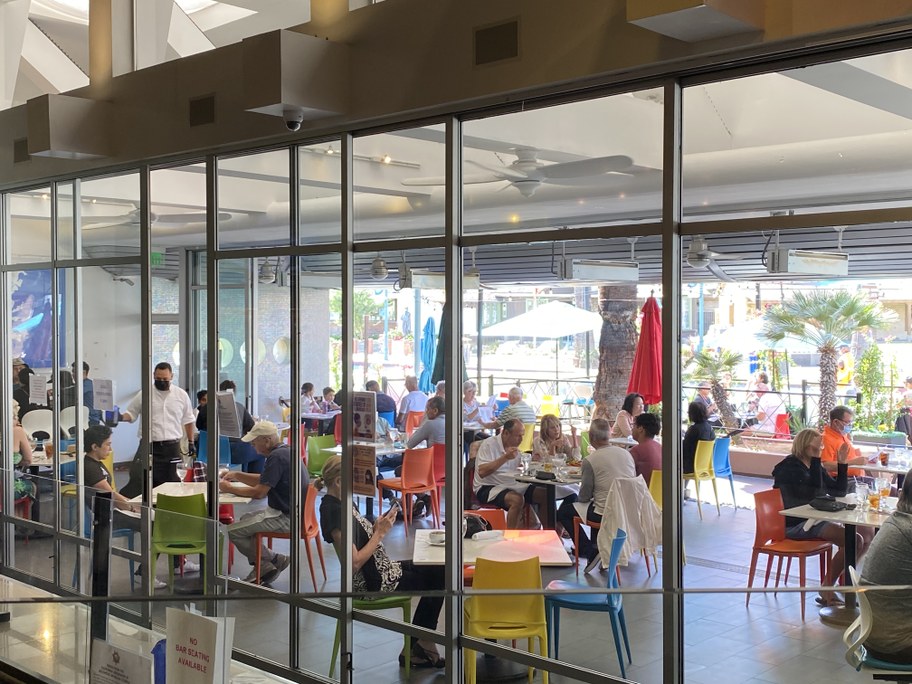 While the inside of Lulu is closed, diners can still enjoy a meal on its shady patio that’s been expanded and overhauled with palm trees and brightly colored umbrellas and shade sails. The restaurant calls this section “the Bistro Garden.” (Photo by Matt Guilhem/KCRW.

But Lulu soldiers on. As the comfortably warm desert fall gets underway, Shay says they’re going all in on their upmarket patio.

“We’ve translated the feel of Lulu indoors to Lulu outdoors, and we actually branded it, calling [it] the Lulu Bistro Garden,” Shay says proudly. “It’s one thing when you say, ‘Would like to sit on the sidewalk or the street,’ right? Versus ‘would you like to sit at the Bistro Garden?’”

Just like John Shay branding the patio “the Bistro Garden,” the town of Palm Springs has reinvented itself before. Whether as a golden era Hollywood retreat, a sunny spring break destination, or now as a warm poolside escape from pandemic boredom, the little city tucked against the mountain has always been a place to get away from it all. And, as it turns out, the market for that only seems to be heating up.