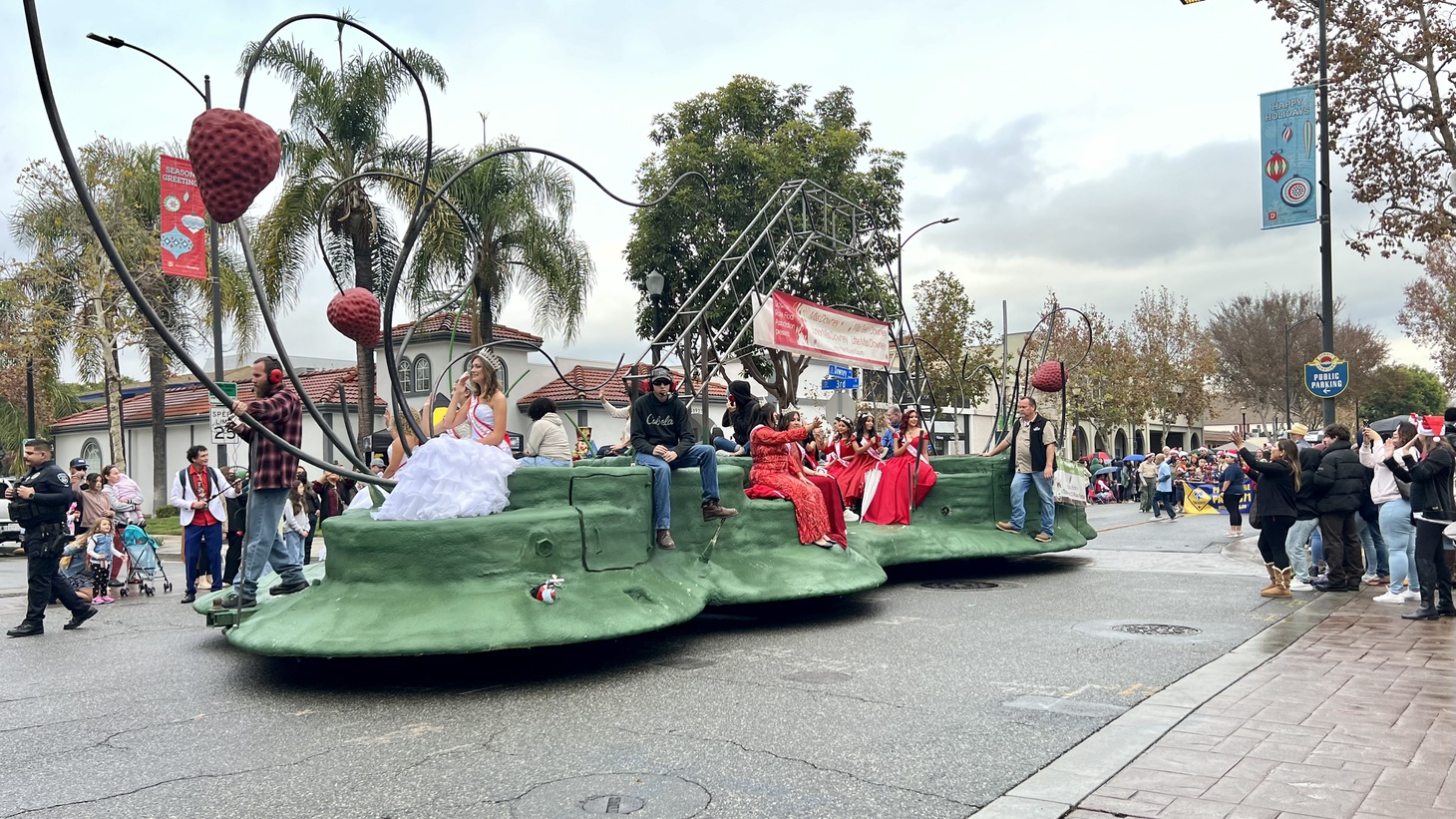 Downey’s in-progress float is seen in the city’s Christmas parade. Riding on it: young women crowned queens and princesses in a local fundraising pageant. The finished float will appear on January 2, 2023 during the Pasadena Tournament of Roses parade. Photo by Rebekah Ludman.

Who builds those spectacular, colorful floats that roll down Colorado Blvd. in Pasadena during the Rose Parade every new year? As tall as a multi-story building, with animatronics and thousands of flowers, petals, and organic material attached by hand, they were once the products of a small-group volunteer effort.

Now, most cities and companies in the parade pay professional builders at least $275,000, according to the Pasadena Tournament of Roses Association.

Most, but not all.

Today there are still six cities in the parade that stick to tradition: South Pasadena, Burbank, La Canada-Flintridge, Sierra Madre, Cal Poly Universities, and Downey. They’ve been grandfathered in under parade rules that allow them to keep providing a homegrown float — but only if they keep it up year after year.

“If there's a year that Downey does not get a float in the parade, from my understanding, we will not be back in the parade again,” explains Kelley Roberts, the construction chair for the Downey Rose Float Association.

That’s something Roberts and a team of other float-builders, Downey city boosters, and elected officials are doing everything to avoid.

It’s personal for Roberts, who has worked with the Downey Rose Float Association for 43 years.

“I snuck out of my parents’ house when I was 9 and jumped a fence, and met my friends the next block over and came down to decorate a Rose Parade float,” Roberts says.

This year, their float is going to cost about $70,000 for construction and decoration materials. It’s called “Bee Inspired” and it will feature a large honeycomb, animatronic bees, and a ton of roses.

“Many floats are sustained by their cities, or by … large donors and corporations. And here's our Downey float that many times really scrapes by with small donations,” says Downey Mayor Claudia Frometa. “It's time for the city to step up and contribute.”

This year the city made a donation that will cover about half of the cost of the float. The Downey Rose Float Association had to raise the rest of the money, after coming from behind because their activities were curtailed by the pandemic.

So in October, for the first time since 2020, the Downey Rose Float Association held one of their biggest traditional fundraisers: the Miss Downey Beauty Pageant.

About two dozen girls and young women in the community compete for the titles of Little Miss Downey, Junior Miss Downey, Miss Teen Downey, and Miss Downey. The winners get a scholarship and a chance to be on the rose float in the Tournament of Roses Parade, which takes place Jan. 2 this year since New Year's Day falls on a Sunday. 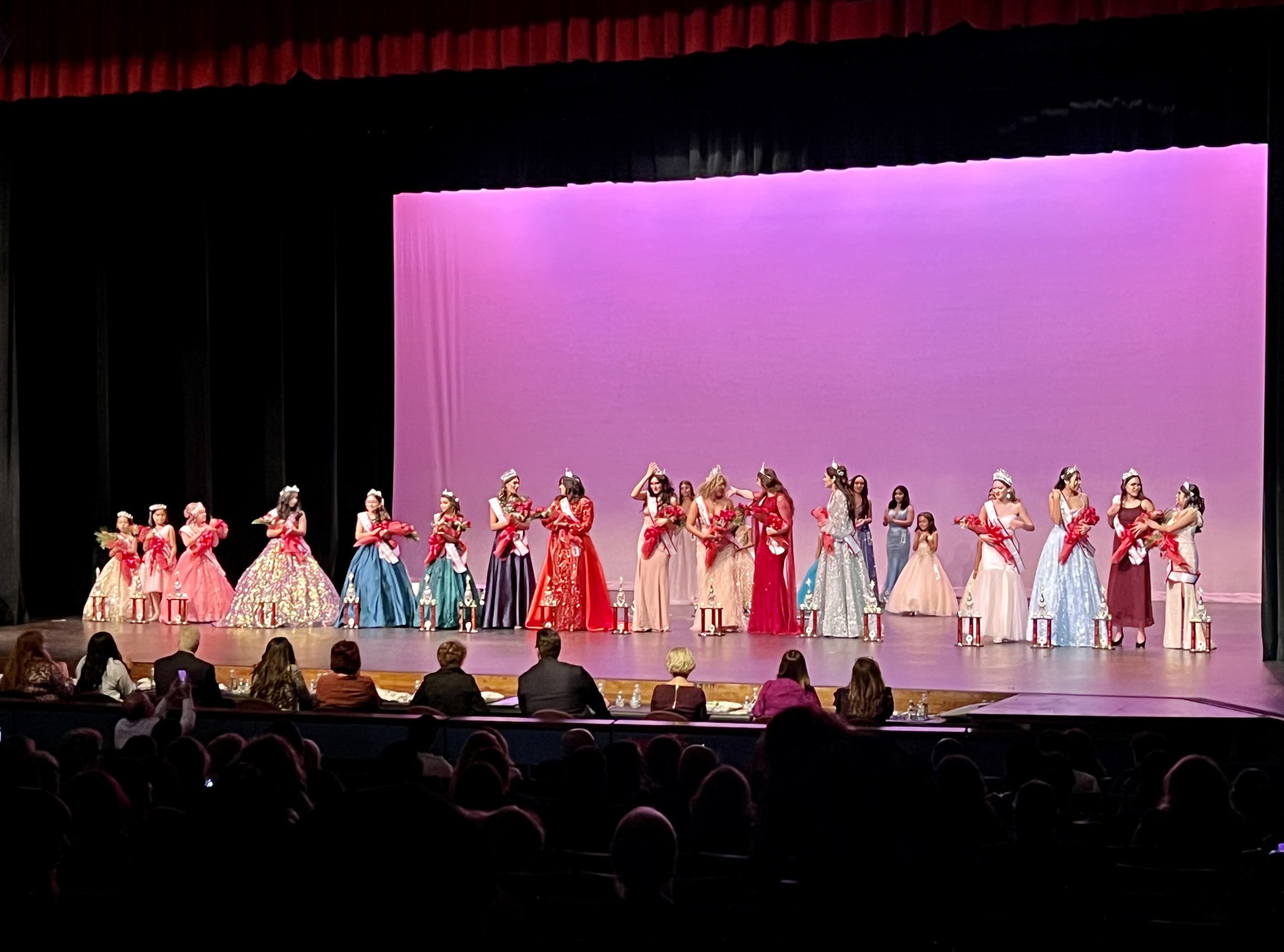 Julie Ledesma, the vice president of the Downey Rose Float Association, was crowned Miss Downey five years ago. She says her experience was a lot of fun, but being on the float in the parade was a little difficult.

“I was at the very top, probably 15 feet off the floor, and all that's holding me up there is a seat belt,” she recalls. “I'm standing the whole time and I'm in a dress. I was freezing and could not feel my feet by the end of it,” Ledesma says.

The beauty pageant helps the association raise about $6,000.

Much more lucrative is a volunteer-run fireworks stand set up before July 4, which made them about $55,000 this year.

In early December, the “Bee Inspired” float had a test run at the city of Downey’s annual Christmas parade. Afterward, the float was taken back to the barn to be finished by Dec. 26 – just in time for decoration week, where anybody can go and help put flowers on the float.

Downey Mayor Claudia Frometa says she gets excited seeing her city’s float. She has helped decorate the float as well.

“It's an opportunity to come together and be able to interact with people that have the same love and passion and dedication for the city of Downey. They want to do this beautiful float that represents the community that they have called home since they were kids. And so that's really, really special.”

After the pandemic led to financial troubles, Downey’s float returns this year to the Pasadena Tournament of Roses Parade. It’s thanks to a community effort and beauty...

Possible loopholes and pitfalls may exist in voter-approved Measure ULA

People with properties worth over $5 million are trying to get around Measure ULA. Also, some advocates for ULA want to amend it for other reasons.

Big Bear Mountain Resort has purchased property it plans to develop into worker housing, and for the past five seasons, it’s been trying to bring in more diverse visitors.