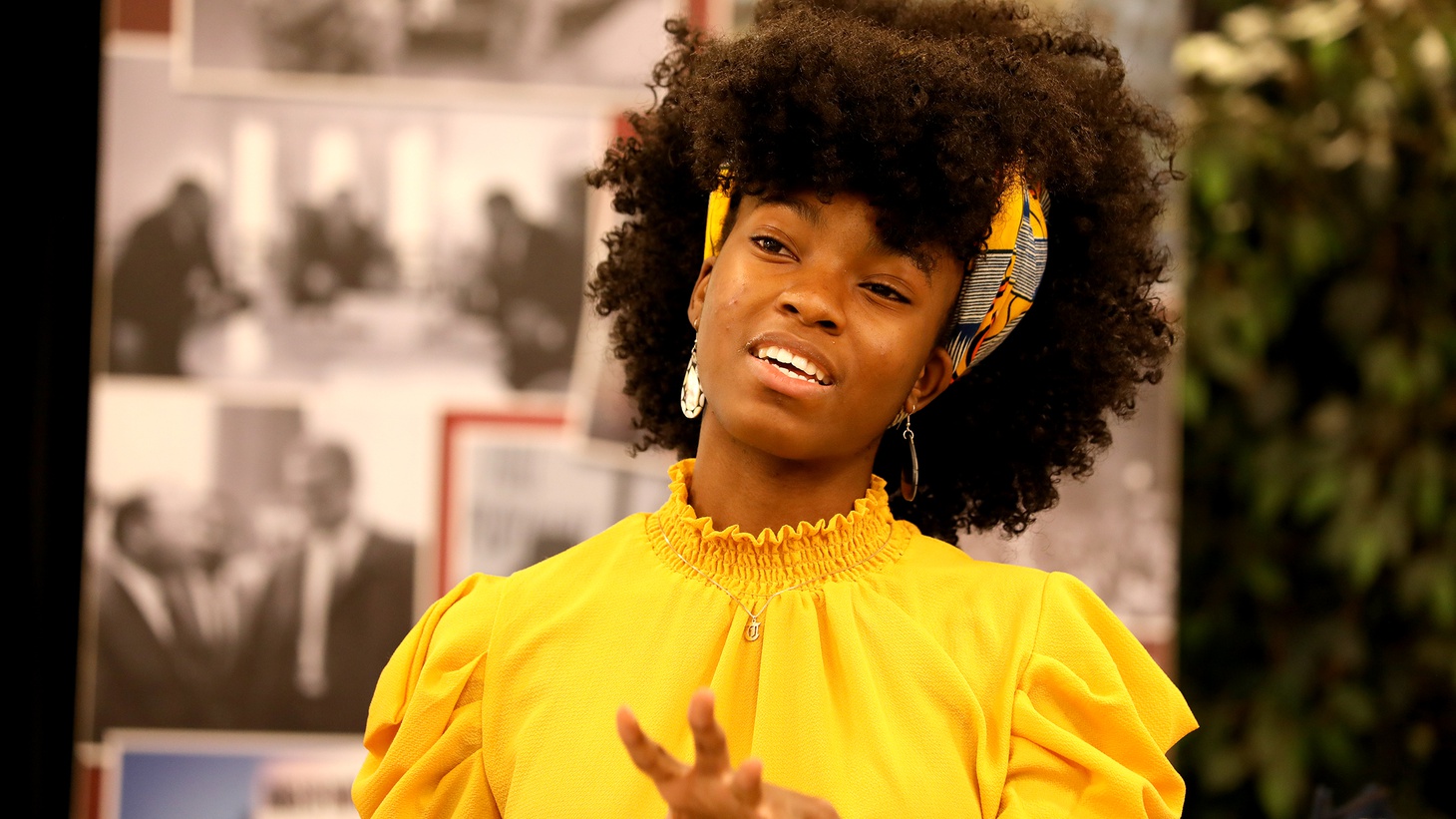 “My art is my voice, and I'm eager to share it with the world,” says Artesia high school student Salome Agbaroji, one of KCRW’s featured poets for the Young Creators Project. Photo courtesy of Salome Agbaroji.

Each day this week, KCRW is spotlighting the homegrown budding talent sourced via the Young Creators Project, a community arts mentorship platform celebrating the creative work of SoCal residents under 21.

“My art is my voice, and I'm eager to share it with the world,” she says.

Agbaroji has performed her poetry live many times and she was the youngest winner of the 16th Annual Ill-List Poetry Slam.

“The adrenaline from the competition and the camaraderie from sharing a space with seven other extremely talented poets from all demographics and ages worked in tandem to create a memorable experience,” she says.

I've been to places pretty.

Pretty places like Beverly Hills,
Where mimosas and liquid diamonds crash on the shoreline.
These beach dwellers collect inner-city properties like sea shells
And trade real estate like spades cards.
These places pretty enough for screen time on your television,
Pretty much the poster child of Los Angeles,
And epitome of daddy’s money.

I’ve been to places pretty.

But I'm sure you’ve never been
to the lowlands of Los Ángeles:

The dark basement the brochures don't show.
Where no one knows a Dorothy,
But Dominique in her un-creased low rise dunks
Is always found walking where
Drugged corners intersect at Broke lanes.
Where Obinne, the Nigerian art collector, sells
A portrait of an afro Mona Lisa on the curb for $50.
Starving entrepreneurship; reparations
In our own hands.
The corner man whistles tunes only
Sufferers know.

A calvary on credit-drawn carriages
Coming to make the place
Pretty.

I’d hoped the sound had been the coming of Jesus, finally
So the painting of Black Messiah in Obinne’s art shop
Made more sense—Made more than cents, finally
Because this living is protest.
This is the heart of LA that beats and weeps all the same.
But investors bleach its arteries with
Beige colors and Caramel fraps.
See street markets where black women sell
Incense and Head wraps
And mark it: “perfect location to reinvent hot yoga!”
Or to build a bank that will deny those same black women loans.

This is what you call…

Pretty
Shines like heirloom pearls.
Not like pretty glimmer of grills in teeth.
No, pretty like veneers and messy bun.
Not pretty like barrettes on little black girls
Or street tacos.
Or graffiti done by people far too talented for their circumstance.
Or broken glass.
Or the unironic musicality of barber shops.
Not like that sweet little
old lady with only six teeth
But still smiled at me anyway
Like I was her own granddaughter.

Nah, that ain't pretty.
I’ve been to places pretty.
And I assure you, those pretty places
Got nothing on the heart of this city.