On the last Saturday of every month, crowds gather around the corner of Elmwood and Western for almighty Opp. Photo by Angel Carreras.

For the past 18 years, audiences have gathered on the corner of Elmwood and Western in Koreatown to get in touch with themselves, funny-looking puppets, and each other. The man behind this recurring event calls himself Jeffrey’s Human Persona.

Now after some 16 months of the pandemic, almighty Opp is popping up again to meet an even deeper need for connection.

Here’s how a typical almighty Opp show looked before the pandemic: Around 9 p.m. on the last Saturday of every month, about 100 people turn up to see “Jeffrey” and his fellow clown-masked assistant “Shambles” set up a small, DIY stage cloaked in black sheets and curtains.

A droning, upbeat carnival music-esque loop fills the air. The curtains open, and then puppets appear.

They’re small, with gnarled faces and furrowed brows, beady eyes, and dirty teeth. They blow bubbles, give birth to other puppets, vomit, sing —  all in musical vignettes ripped from the neuroses of its creator. 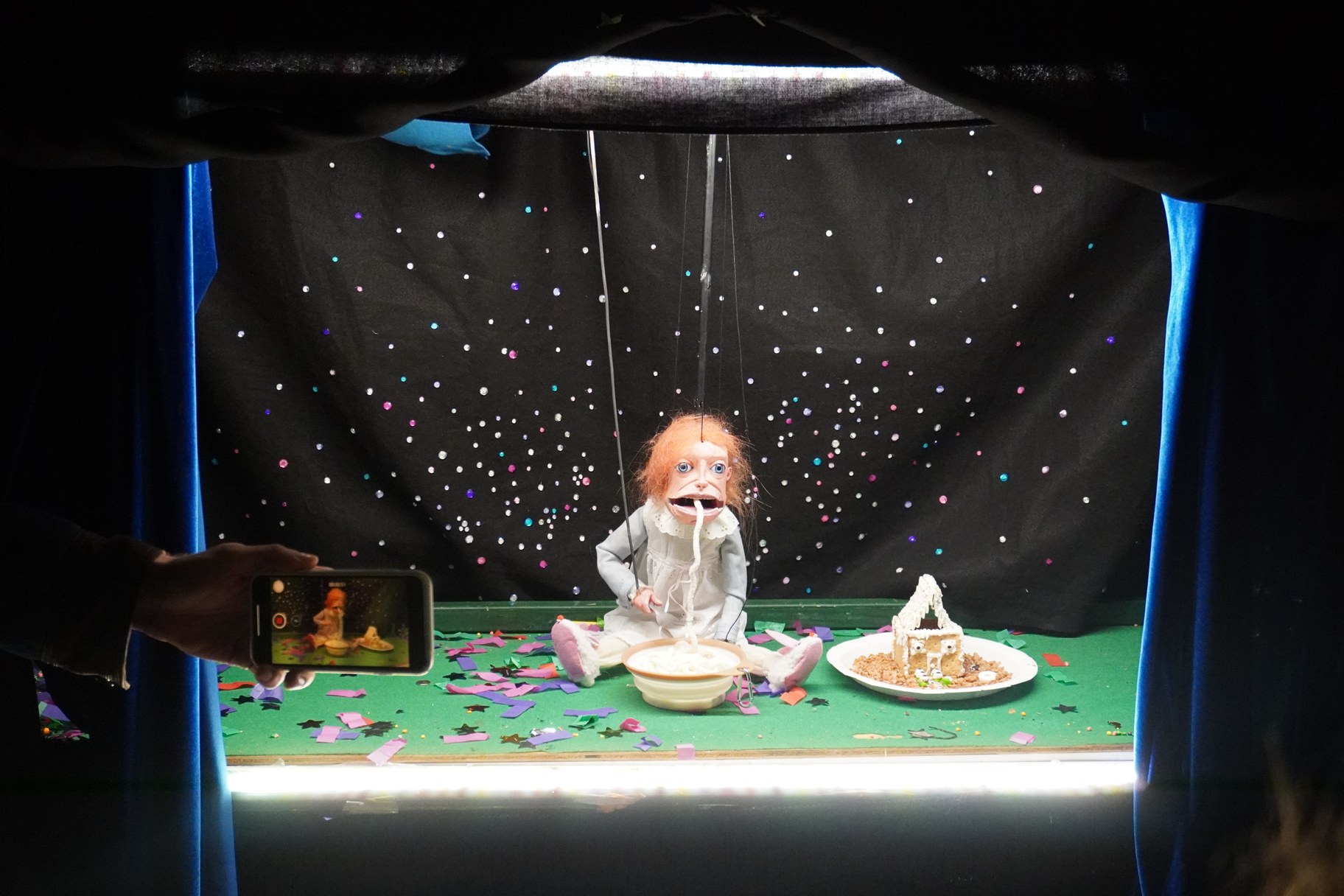 almighty Opp features a gallery of different puppet characters. This one eats and vomits. Photo by Angel Carreras.

One puppet anxiously claims he’ll “never amount to anything.” Another chastises the audience for their lack of manners. One soothingly sings, “It’s okay that it’s not okay.”

In between vignettes, Jeffrey dances with audience members, rushes into traffic, and tries to get someone to pull over and join the audience. He holds a mirror up to a face in eerie silence.

Behind the theatrics, it’s the heart of the show that’s garnered almighty Opp a large cult following.

Audience members turn to the person next to them, shake hands, hug, and make dinner plans.

“I think Los Angeles can be such an isolating experience at times,” said first-time almighty Opp-er Desiree Monique in 2020. “It’s nice to see a mass amount of people just talking and having conversation, seeing the importance of community and being together.”

Adapting the show during the pandemic

As COVID spread, Jeffrey decided to take his show to Instagram Live. Thus, “The Softening Hour” was born.

“There's always that one person who doesn't have a friendship network. … I really did try to make it the community service that I always knew that it was,” he says.

At its peak, over 1000 people watched almighty Opp on their phones. Jeffrey delighted in experimenting with new songs, introducing new characters (like his dog named Corn Chips), and not having to haul what he says is “equivalent to a studio apartment” to the Koreatown corner via bicycle.

He also learned a bit about himself.

The person behind Jeffrey’s Human Persona

Jeffrey agrees to speak with KCRW — but only at the top of a mountain above Topanga Canyon. He shows up in full hooded, jumpsuited garb. Mask on. 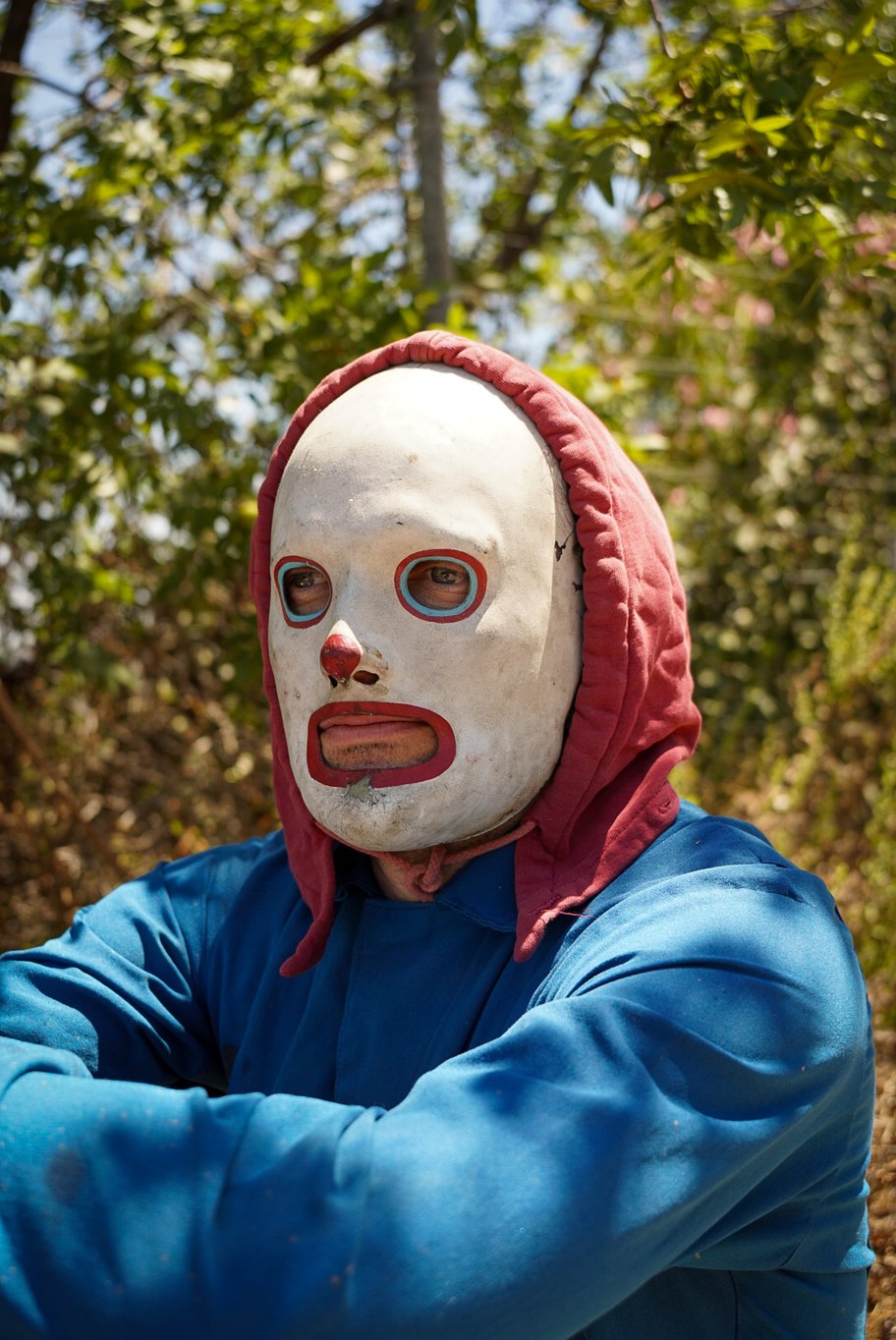 “Jeffrey’s Human Person” on top of a mountain. Photo by Angel Carreras.

The first interview is a test of earnestness versus insincerity. Jeffrey describes almighty Opp as “a selfish project,” designed only to make him and his assistant laugh. He says he doesn’t care what the crowd gets from it.

A year later, he agrees to a second interview — still on a remote mountaintop, in costume. The conversation is more open and gentle. He describes how fans raised money for him when a fire burned down his workshop. He opens up about a since-departed friend, Ian Nicholas, who pushed him to create almighty Opp.

“The service is dedicated to him,” Jeffrey says. “He passed away in 2002. Around that time, right before he died, I was talking to him about this project. He’s a big reason why this exists.”

Jeffrey had wanted to package together his talents in  music, artistry, and puppetry. But he was too shy to do it.

“I was always afraid to sing, afraid to really offer what I consider to be my real music to people rather than these puppet songs,” he says. “I was always kind of guarded with things that might be a little more emotional or really meant something to me.”

That tension between hiding and performing pervades his real life. He resolves that with the memory of Ian Nicholas and this performance.

“These [performances] that I've made for so long, you can see this progression in them. … They sound almost like who I actually am.”

Jeffrey is a performer, artist, puppet-maker, and now he’s becoming  a community builder. That’s why he’s itching to head back to that street corner.

“It's the first time in so long that I'm a little nervous about going down there,” Jeffrey says. “I know everything about that corner, every little pebble that's out of place. It's such a surreal feeling to have it be so foreign to me now.”

When audiences return to the street corner of Elmwood and Western, they can expect something beautiful, strange, comforting, uniting ... something… almighty.

Seventeen million gallons of raw sewage from the Hyperion Water Reclamation Plant ended up in the ocean off El Segundo and Dockweiler Beaches on July 11 and 12. What caused...

What to do when parents won’t let their teens get COVID vaccines? VaxTeen offers guidance on consent laws