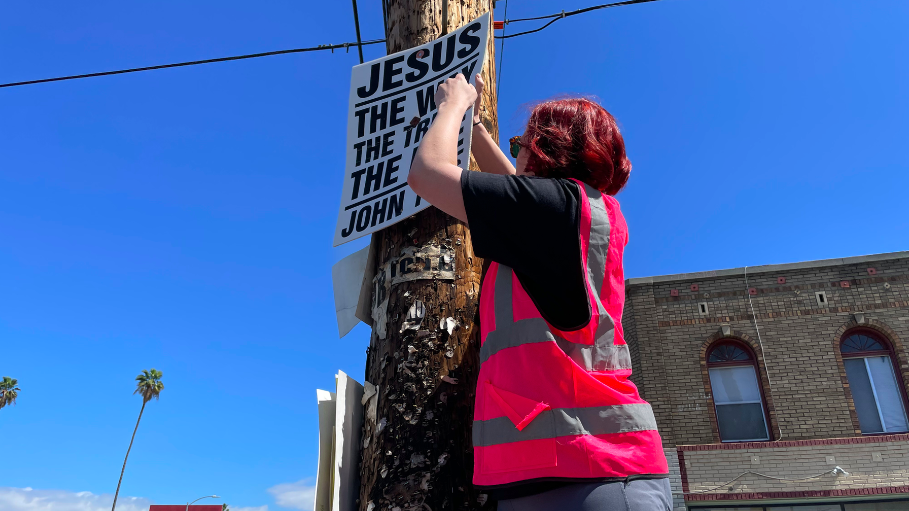 Anya Overmann, who volunteers as an “atheist street pirate,” removes a religious sign on a public telephone pole on Pico Blvd. Photo by Caleigh Wells.

A group of three people in neon vests march up to a telephone pole on a busy LA street and stare up at a posted sign that reads, “Jesus: The Way, the Truth, the Life.” Two hold steady a ladder while one climbs up, gracefully twists and rips the corrugated plastic, and frees the Jesus sign  from the metal nails that crucified it on the pole.

“There we go!” cries one of the neon-vested people down below.

These are the Atheist Street Pirates, a group of volunteers who locate and remove illegally posted religious signs in public places. They first organized last fall, and already they have more business than they can handle.

Founding Pirate Evan Clark is the first executive director of the statewide nonprofit Atheists United based in LA. Before that, he founded the atheist group at his college, Cal Lutheran.

“I went to a Catholic school in first grade and quickly decided this god stuff’s not working for me,” he says. “[In] sixth grade, I was flipping through a dictionary and there was this word called ‘atheist’ and I said, ‘Whoa, there’s a word for me!’” 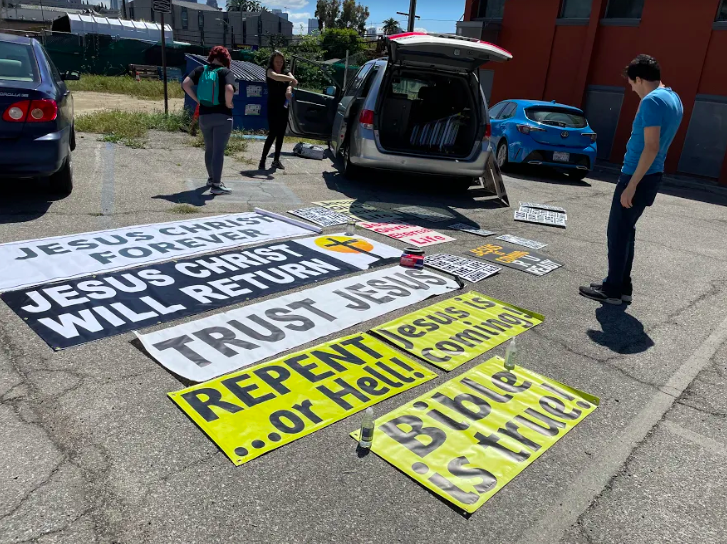 The Atheist Street Pirates lay out some of the signs they have collected in their previous plunders. Photo by Caleigh Wells.

Fast forward to last fall, when he and other atheist volunteers talked about taking down religious signs in public places, which they jokingly called the Atheist Religious Rubbish Removal Group or ARRRG. The idea, and the pirate reference, stuck. Now their website promises they will “scuttle the efforts” of “religious scallywags” who post illegal street propaganda.

While multiple legal fights over religious displays on public property touch on the Constitution’s establishment clause, Clark says the legality of unsanctioned signs on poles and overpasses is more cut and dry.

“You can stand on top of a highway and hold a sign as loud and proud as you want. You can spend 15 hours up there if you want. But the second you leave it behind, you've left trash on public space,” he says. “Religious signage, there's tons of laws that say secular land can't preference one religion over the other.”

How do the Pirates track down signs? Residents can report the ones they find to the Pirates, and these days, they have a lot more reported signs than successful takedowns. Almost all of them are Christian. 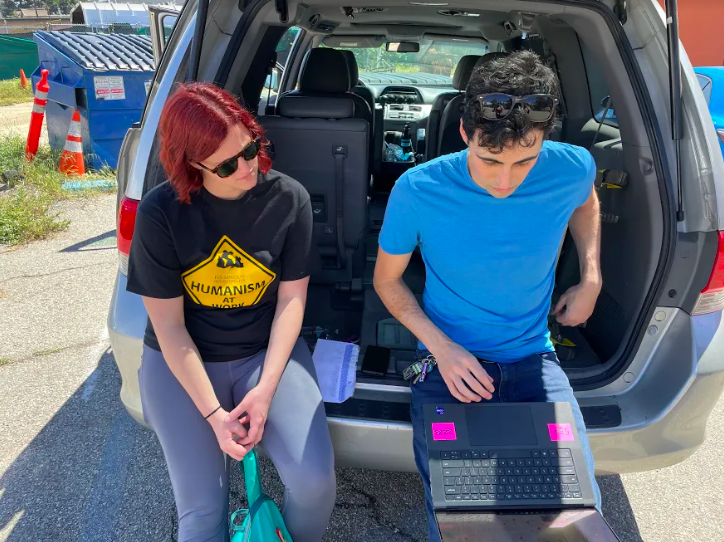 Actually shimmying up to a pole and removing a sign is harder than it looks, reports Atheist Street Pirate Anya Overmann on her maiden voyage. “I didn't know that they would be fastened that hard and used with  that intensive hardware onto these poles. I mean, these people are serious. They do not want you to get these signs down,” she says.

But one Atheist Pirate’s failure is a Christian proselytizer’s success.

Brent Farley, founder of Jesus Saves Sign Ministry, sells signs nationwide for people to post in their hometowns. “Somebody actually getting their life, transferred to God in eternity … is so worth the risk” of a potential fine, he says.

But more than a decade ago, Farley didn’t believe in a God either. He was also using heroin, cocaine, meth and pain pills.

“Every day, I wouldn't even go to sleep unless I had something on the counter next to me to wake me up. It became horrifying,” he says. “And it just made the Lord coming into my life all that much more powerful.

He says he was trying to get clean and going through withdrawal on Easter weekend. As he sat watching the History Channel, he stumbled upon a show about the cloth that Jesus was buried in. “And by the end of it, I was just convinced that this Jesus character was actually the son of God,” he says.

“I go into the bathroom, I start vomiting in my toilet and … I felt like he just came into my life,” he says. “I said, ‘Come in and help me.’ So he came in and helped me.”

Farley became a street preacher, until COVID hit and the streets emptied. Then he founded this nationwide movement of people putting up street signs. In Farley’s view, the sign might not mean much to some people, or might even be offensive. But what if there’s one person who sees the sign, and it saves their life, like that history channel TV show did for him?

That's why Farley sees the Atheist Street Pirates as purveyors of hopelessness, interfering in his quest to bring life meaning.

“To take one of these signs down that Jesus saves … to take that hope away of eternity with our Creator … you're actually taking their hope away from their life, so they have nothing to live for,” Farley says. “And that can't be tolerated.” 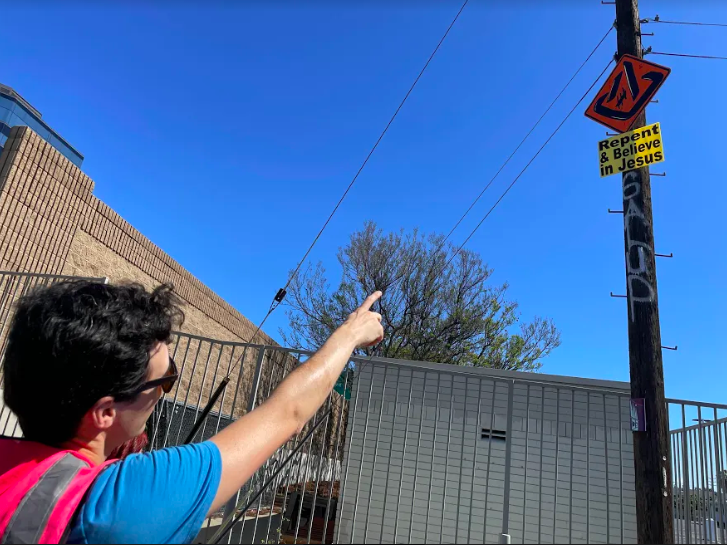 When a sign is too difficult to reach, Evan Clark reports it to a public works department to have them removed. Photo by Caleigh Wells.

But Atheist Pirate Evan Clark has plenty to live for: protecting his Constitutional right to landscape free of religious signage, for example, and preventing the normalization of religious messages in public spaces. He describes a slippery slope: “It’s how ‘In God We Trust’ gets on the money.”

After spending an afternoon taking down signs like those, the atheist pirates pillaged just a couple of the nine signs they set out to take down. There are dozens left marked on their crowdsourced map. But Clark says taking them down isn’t the most important part of their mission.

“We're tracking this phenomenon. We're making it known that this is a problem,” he says. “Unchecked religious privilege and microaggressions by some religions – we can't even start the conversation about what it means for our society until we have an understanding of what it is.”