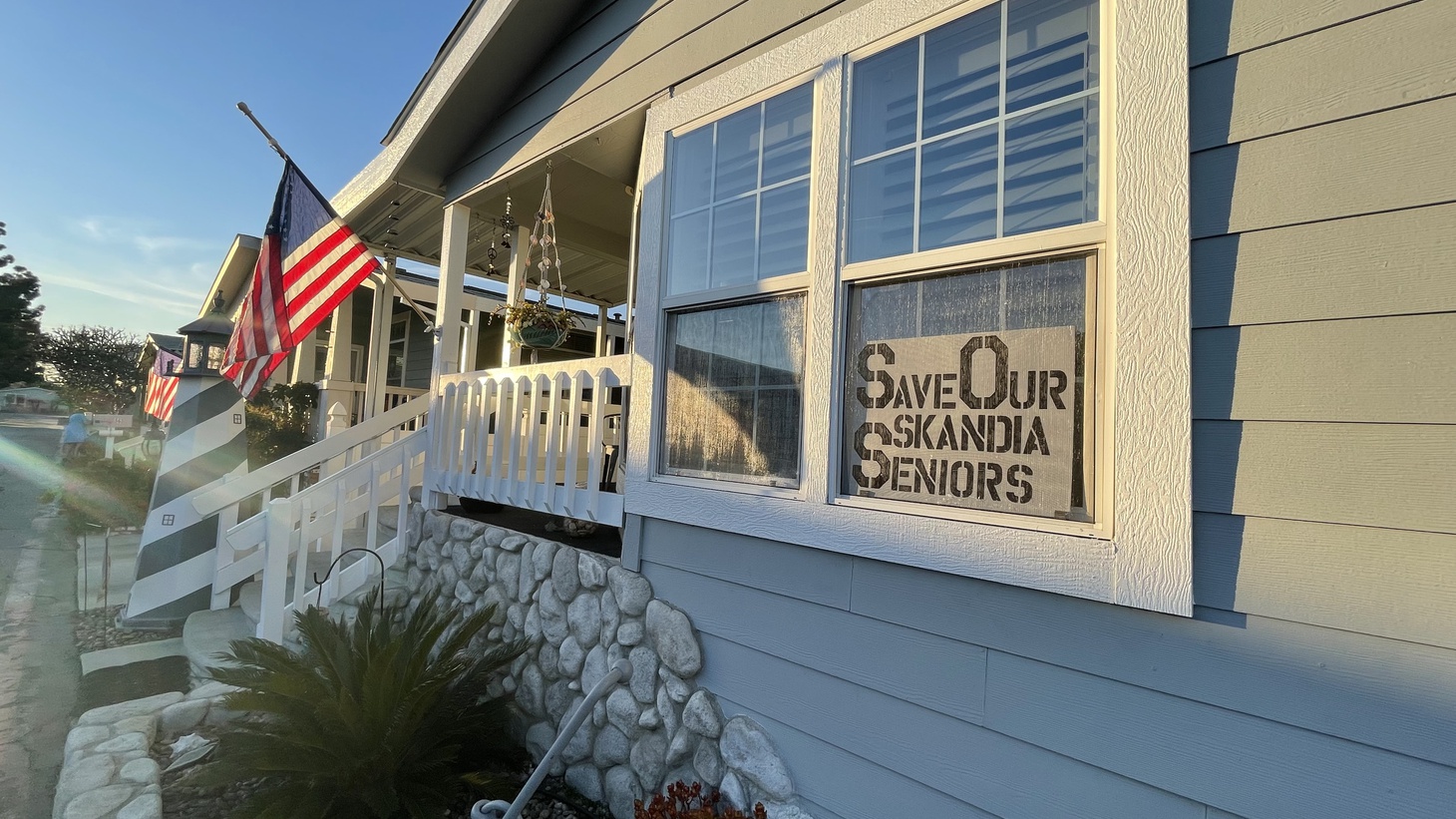 Running a campaign for mobile home park rent protections from her Huntington Beach living room was not on Carol Rohr’s retirement bucket list. Travel and kayak excursions are more this 65-year-old’s speed.

But Rohr now spends up to 12 hours a day working to get rent stabilization for mobile home parks on the city’s November ballot — reading city handbooks, canvassing the neighborhood, and meeting with City Council members. She’s become the president of the homeowners association at Skandia Mobile Country Club where she lives.

It all started in August 2021 when corporate real estate owner Investment Property Group bought the family-owned Skandia mobile home park. Soon IPG announced rents would increase $225 over the next three years to cover a more than tenfold increase in property taxes when the land was transferred to them.

That rent only pays for the use of the land under the mobile home. It doesn’t include the cost of buying the home and maintaining it. That’s the responsibility of homeowners like Rohr, who believes the new fees amount to rent gouging.

“It was obviously predatory behavior, thinking that they could just buy it up, increase the rents and cover the new taxes. It's wrong. It's evil,” says Rohr. 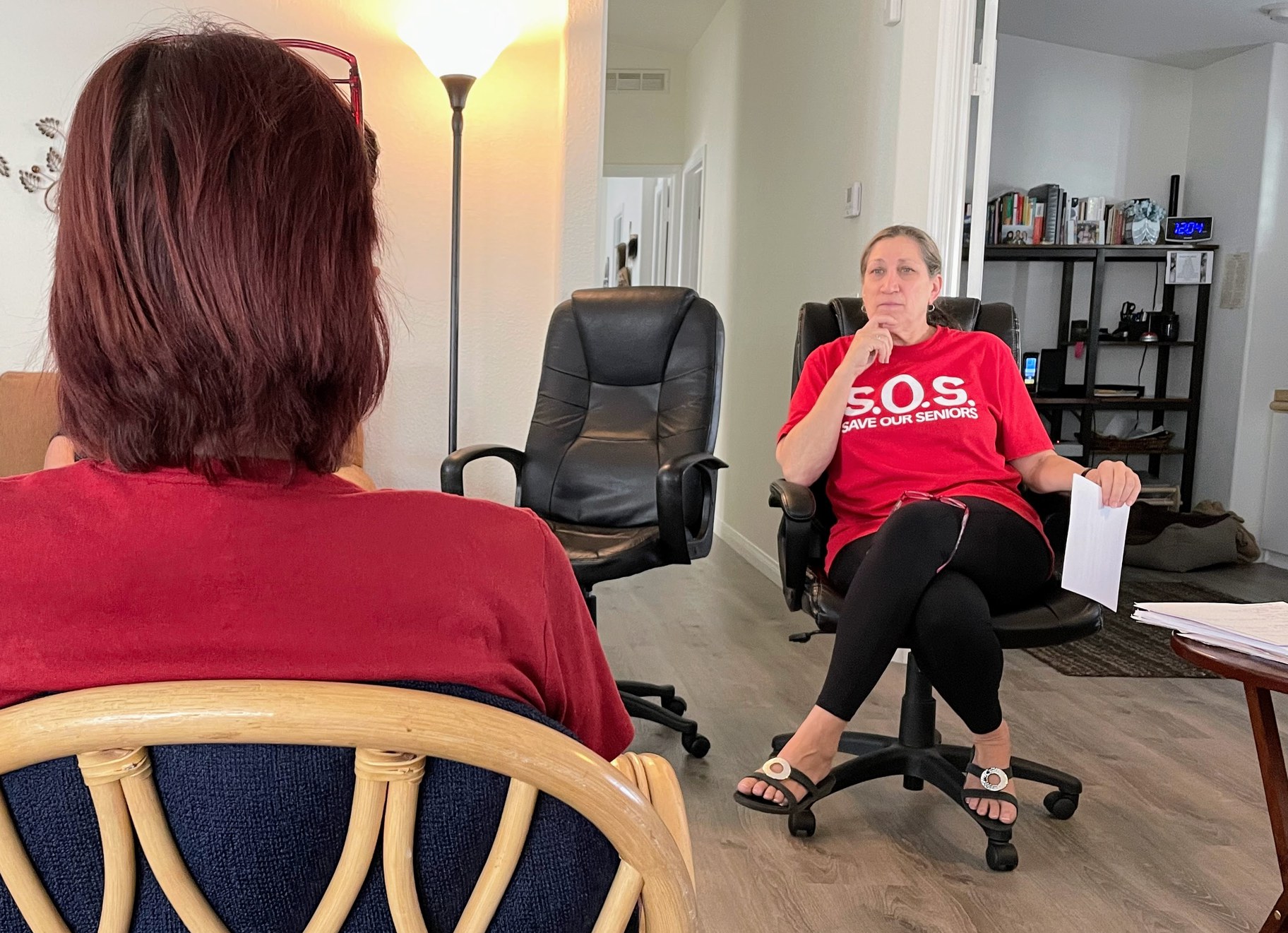 What’s happening at Skandia Mobile Country Club is by no means unique. Large investors like IPG are buying up parks all across the country. Billions of dollars were invested last year in this type of affordable housing, with a record 22% of that money coming from corporate firms, according to Bloomberg News.

IPG bought Skandia for $58 million and owns 100 other parks across the country.

Julie Rodriguez, IPG’s president of property management, defended the new rents at a February Huntington Beach City Council meeting. She said the increases for existing tenants don’t come close to covering the increase in property taxes. “But we kept the increase low in order to ensure every resident can stay in their home,” she said.

IPG plans to raise rents by $75 for the next three years, which means monthly fees for Rohr will total $1590, an 18% increase. Meanwhile, new tenant rents are increasing by 50% this year to $2195 a month.

That might not sound like a lot for a location less than two miles from the beach, but Skandia is a park for people ages 55 and up, says Rohr. “There's a lot of people who only have fixed income, who will not be able to afford higher rents [and] who don't have places to go.” 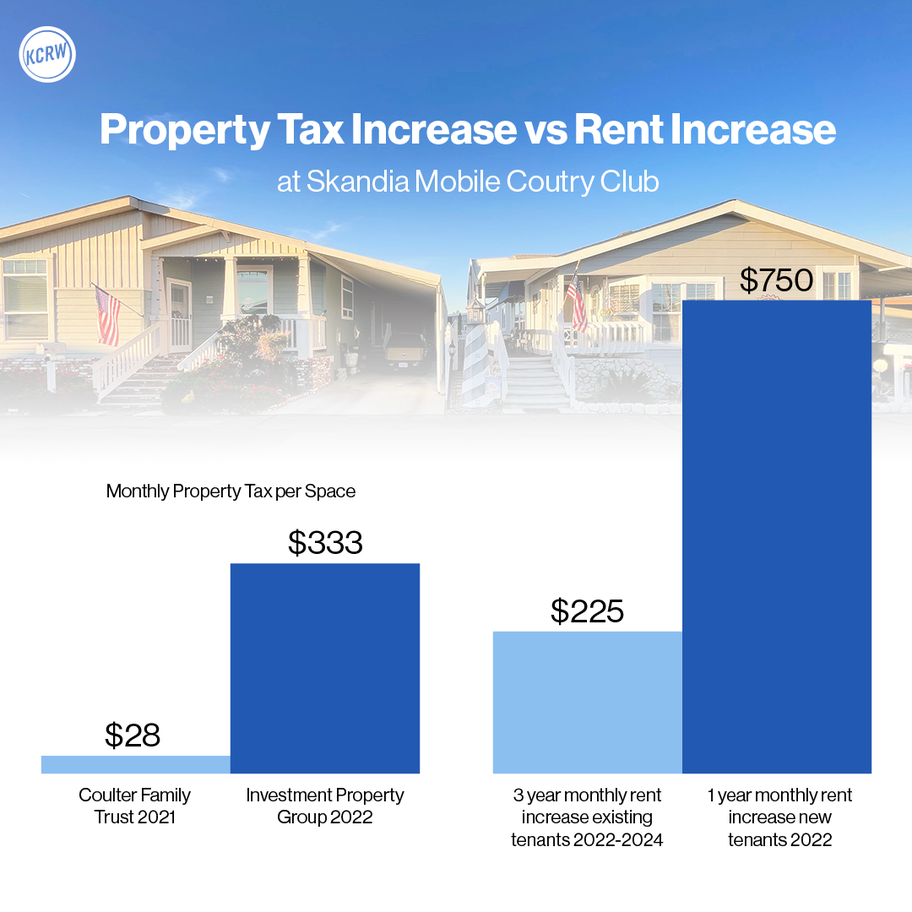 The figure above shows the increase in property taxes versus rent increases at Skandia Mobile Country Club after Investment Property Group purchased the park from the Coulter Family Trust in August 2021. Figure by Mike Royer/KCRW.

He adds, “It’s all they care about. If they can make more money, they'll do it legally. And they'll push the envelope.”

IPG did not respond to KCRW’s requests for comment, but representatives told City Council members they are participating in a rental assistance program that offers up to two years of rent relief to a limited number of residents. And they said they are investing in the property with things like $85,000 to resurface the streets, and $15,000 worth of new pool furniture.

This all sounds familiar to Patricia Taylor. IPG bought her mobile home park nearby in Huntington Beach three years ago. This year Taylor’s rent increased $85 to over $1500 a month. Taylor, who’s in her 80s and lives off social security, says she no longer has the budget for simple pleasures like eating out.

“I'm very careful about what I spend and I don't do much entertainment. I don't plan to travel. I can't go places,” says Taylor. “My income pretty much takes care of necessities and that's it.”

In 2014 she worked on a grassroots campaign that failed to get rent stabilization on Huntington Beach’s ballot. Now she’s working with Carol Rohr and a dozen other seniors to revive the effort at weekly meetings in Rohr’s home. Rent stabilization specifically for mobile home parks would protect tenants like her from large rent increases, while allowing property owners like IPG to increase rent at a regulated rate. 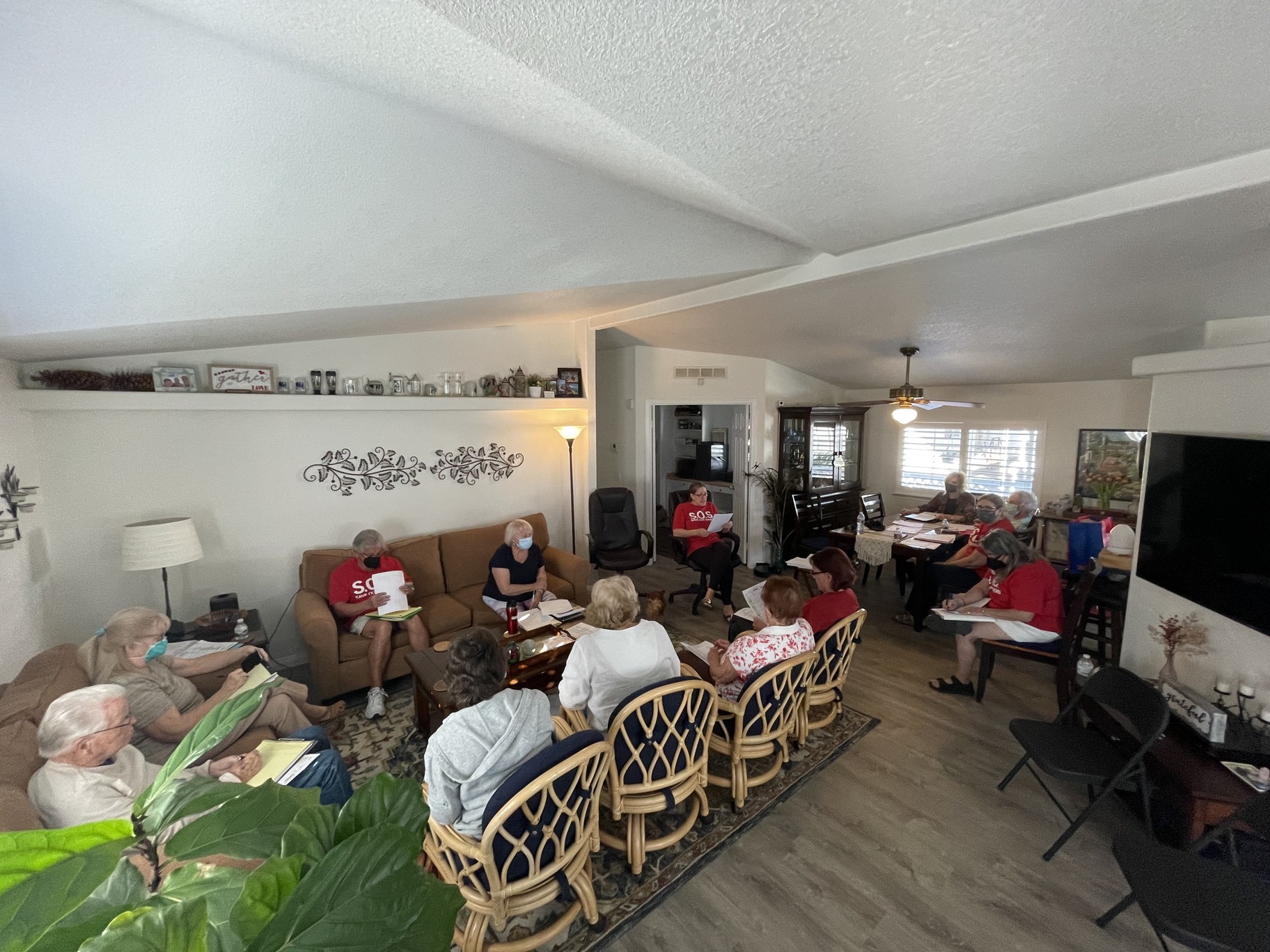 A dozen seniors gather in Carol Rohr’s living room in Skandia Mobile Country Club to discuss a strategy for getting rent stabilization on the city of Huntington Beach’s November ballot. Photo by Megan Jamerson.

“We are trying to get the city to assist us in helping to protect its senior citizens,” says Taylor. “Supposedly Huntington Beach is the city of compassion and we're hoping that that will wind up being the case.”

Nine California counties, including Los Angeles, and 86 California cities now have some form of rent protection for mobile home tenants. The pressure is on in places like Huntington Beach where six out of 17 mobile home parks are now corporate owned.

There’s more sympathy now on the City Council for rent stabilization than during the last push for it in 2014, and the nearby city of Santa Ana passed a version of rent stabilization last year. Taylor says mobile home residents in Orange County are also becoming more outspoken about the issue. “It's just, it's not ethical. It's not fair. It's not reasonable. So it drives you to action in order to try to get something to assist those people.”

Tenants like Taylor own their mobile home, and if rents get too high, she could have it moved. But that costs tens of thousands of dollars. Selling is not a great option either, because the homes typically depreciate in value as rents increase.

For those who can’t afford the higher rent, there is the threat of eviction. Taylor says she might be able to manage the rent increases for another two years. After that she’ll try to sell her home and go live with her 90-year-old brother and his wife in Colorado Springs.

Taylor is feeling anxious about the possibility of losing her two-bedroom home and the flower garden she’s grown over the last 12 years. “I love my house and I don't want to go any place else, and I don't want to be forced to because of the situation,” she says. “I enjoy where I live. I have a cat for a companion and he seems to be very happy there too.”

Taylor, Rohr and the dozen other seniors that gather for weekly meetings have until August to get rent stabilization on the ballot. Option one is to gather 29,000 signatures. Option two is to convince the City Council to sponsor the ballot initiative themselves.

Neither will be easy, and the work doesn’t stop there, says Rohr. Once the measure is on the ballot, she will be leading a campaign to convince a majority of the city’s residents to support it.

“The hardest thing is the pressure of failing. At least 3,000 to 5,000, maybe 6,000 mobile home residents in Huntington Beach, whether they know it or not, are counting on us,” says Rohr.

The new corporate owner of a Huntington Beach mobile home park is increasing rents in March, part of a national and local trend.

As Russian forces wage a grim battle across Ukraine, many Ukrainian expats in LA want their neighbors to understand what’s going on.