Learn to roller skate and connect to an African American legacy A skater works on her move at a roller skating meetup in Santa Barbara. Photo by Kathryn Barnes/KCRW.

Terrance Brown is the first one to arrive at a vacant parking lot near the beach, across from the Santa Barbara City College football stadium.

He’s not here to play football. He’s got his roller skates on, ready to welcome others to a free, weekly skate club he organizes on Sunday afternoons called SB Rollers.

“I started it three months ago, and I started skating in general five months ago,” he says. “I'm still shocked today. Every time I wake up, I'm like, ‘Wow, I've started a roller skating club!’” 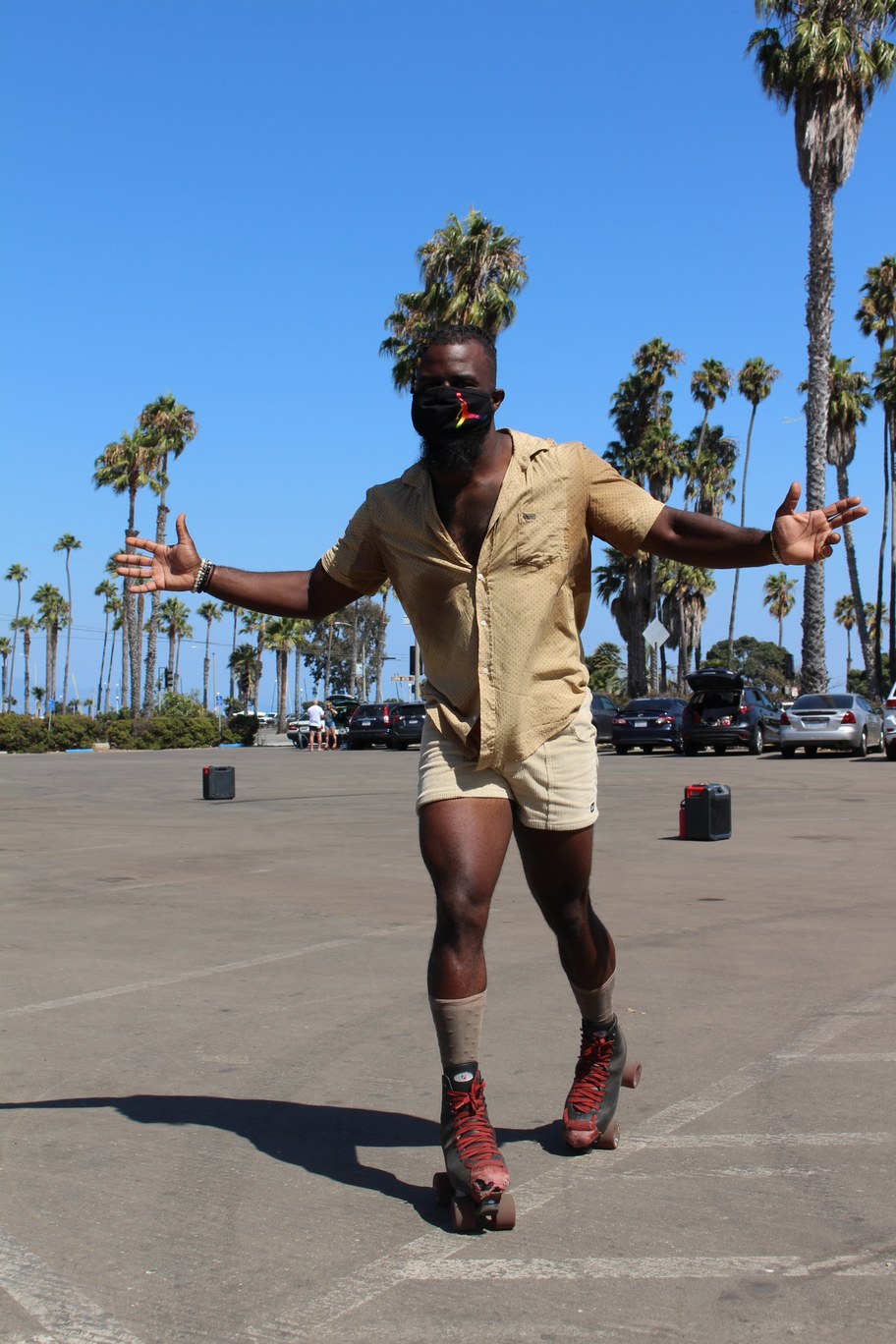 Terrance Brown is a personal trainer in Santa Barbara. He bought his first pair of roller skates when the pandemic hit California and formed a skating club shortly after. Photo by Kathryn Barnes/KCRW.

The 31 year old moved out to Santa Barbara from Miami nine years ago to play football in college. After graduating, he started a personal training business, specializing in college and professional athletes.

But his business started drying up in March, when the pandemic set in here in California.

“I reached out to my mom, and I said, ‘Hey, this is really killing my business. The clients wasn't [sic] coming. They're opting out. What should I do?’ And she goes, ‘Well, why don't you start skating?’ I'm like, ‘No, I have way too many muscles to be skating. I'm a football guy. I don't skate.’ So she goes, ‘Give it a try. I used to do it, you know, all my girlfriends and our afros. You know, it's fun. I'm telling you, you're going to love it.’”

She was right. He bought a pair of skates and was immediately hooked.

Brown is not alone. There’s been a resurgence of interest in roller skating lately. Some skate manufacturers are backed up until October. 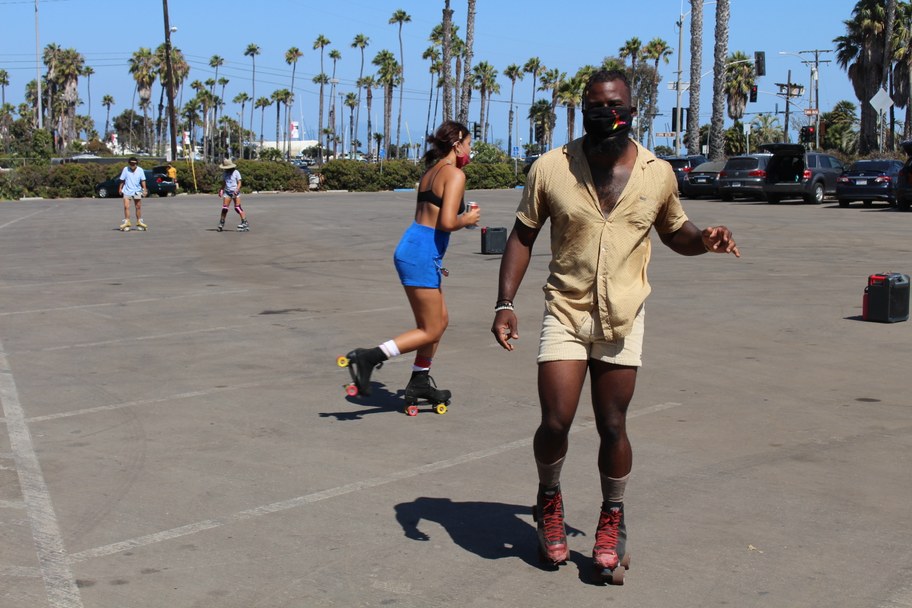 Brown says skaters come from as far as LA, Ojai, Solvang, and even San Diego to skate with the SB Rollers. “I see a lot of individual people doing their own thing, but not really socializing,” he says. Photo by Kathryn Barnes/KCRW.

Brown is skating down a path laid by generations of Black skaters, and while he learns to skate, he’s learning about that history at the same time.

During the time of segregation, Black people were kept out of rinks throughout the country. In 1949, young protesters staged a “skate-in” at White City Roller Skating Rink in Chicago after Black skaters were repeatedly denied entrance. 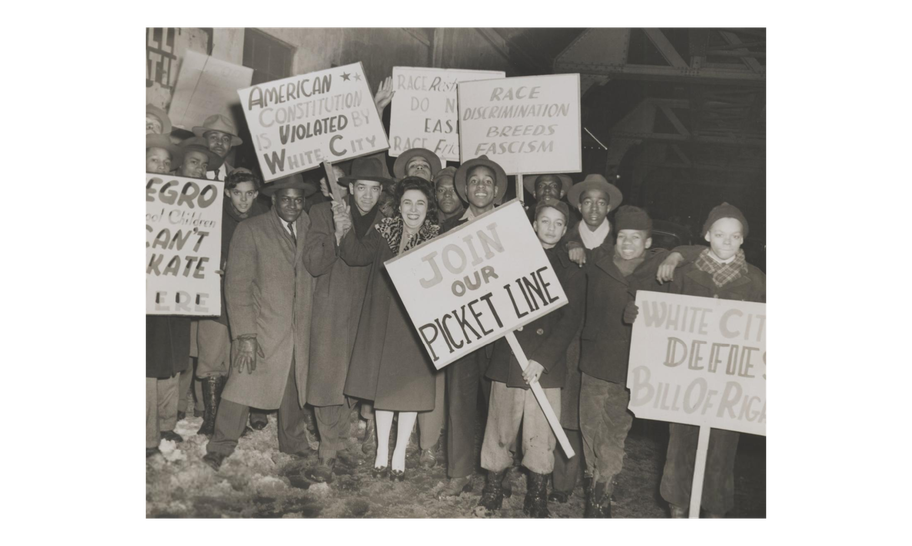 Even after the Civil Rights era, many rinks would give Black skaters just one evening a week, with a code name like “Soul Night” or “Martin Luther King Night.” Many rinks instated discriminatory dress codes and policies, like no baggy pants and no hip-hop music. 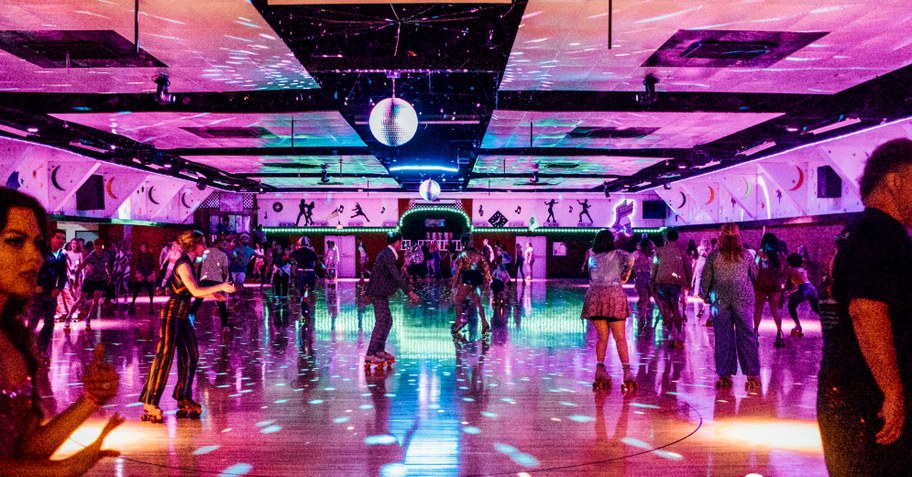 The Moonlight Rollerway in Glendale prohibits hoodies worn over the head and micro wheels, which are popular among Black skaters because they’re slicker and allow you to dance more easily. The rink says those rules are meant to keep people safe and aware of their surroundings, and that small wheels scuff up their original floor from the 1950s.

But Pete Russell, a custom skate maker based in Paramount, says none of the other rinks around LA have complained about micro wheels.

“I can't tell another business owner how to run their business,” he says. “But if you're going to do something that's going to target a specific group of people, then there's really nothing else you can say other than it's meant to keep those individuals out of your establishment.” 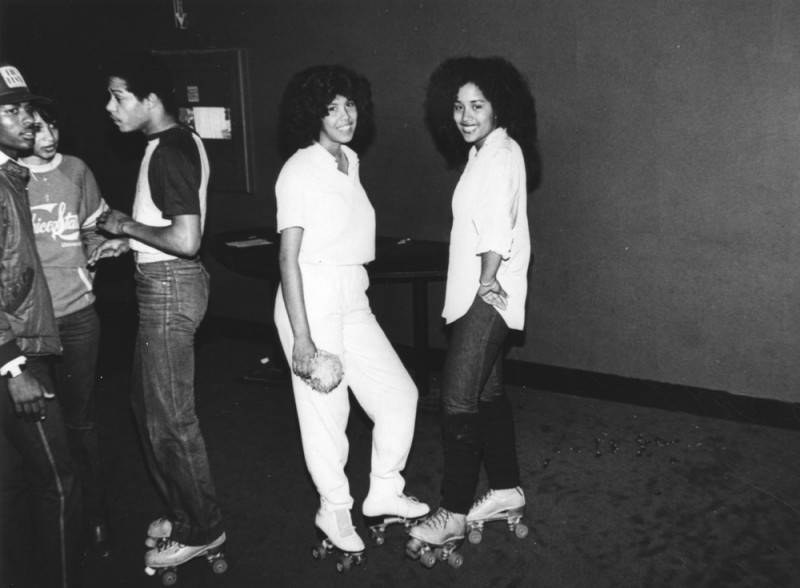 Russell grew up skating in LA at special nights catering to African American clientele. He says they created a beautiful world filled with unique skate styles and the music they wanted to hear.

Many rap and hip-hop artists from the mid to late 80s started out performing at roller rinks. Dr. Dre, N.W.A, and Queen Latifah played some of their first shows at Skateland U.S.A. in Compton. 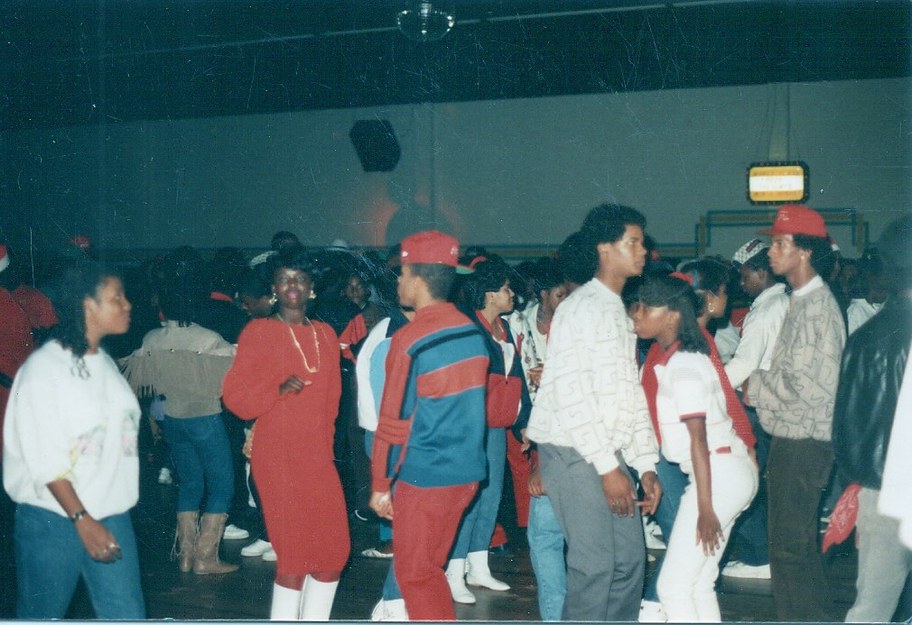 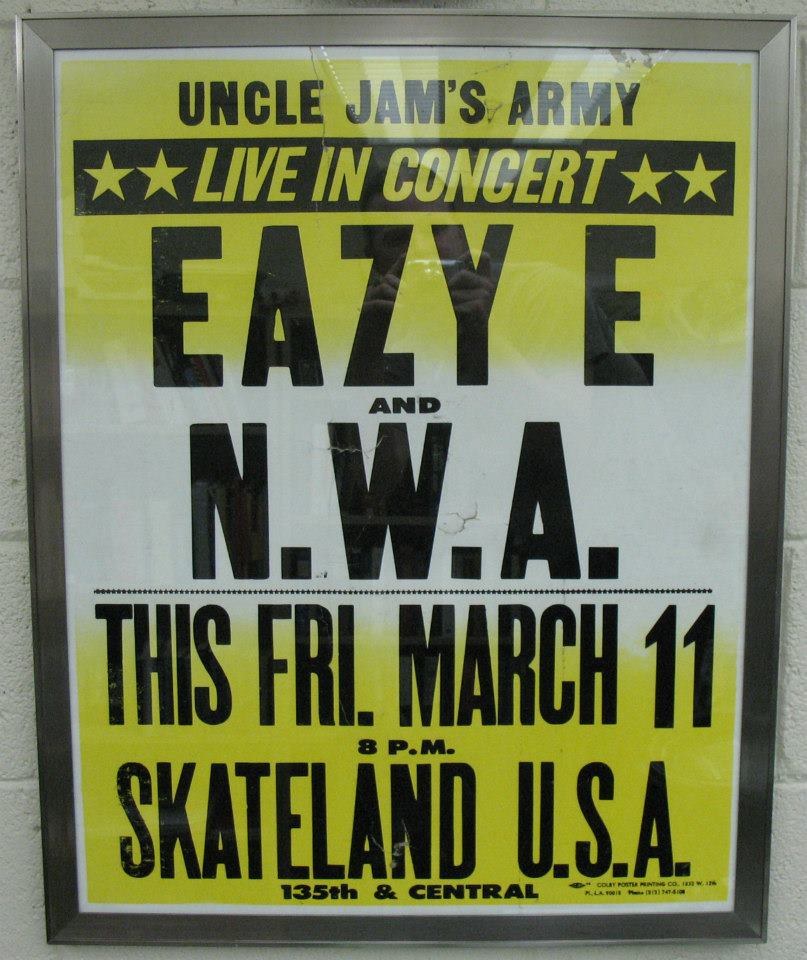 “Skating rinks was [sic] hardcore. If you could rock out in a skating rink, you know you’re doing well,” said Cheryl James from Salt-N-Pepa in the 2018 HBO documentary, “United Skates.”

Back in Santa Barbara, Terrance Brown is still learning about the history of roller skating and his role in its future. But that future is complicated.

Even before the pandemic, roller rinks have been closing all across the country, struggling to survive financially and getting replaced by big box stores.

Skating outdoors, however, is having a renaissance. And with the rise of viral videos of predominantly white women showing off their dance moves on roller skates, longtime Black skaters are worried a culture they helped create is getting whitewashed online.

support black skaters!!! here’s some clips of me within the past year skating my booty off &lt3 ##rollerskating

Brown hasn’t seen this tension come up much in his own club, but he does have one example: the club’s name itself.

“Before it was SB Rollers, it was Roll Bounce,” he says, referring to the 2005 movie about a roller skating crew in 1970s Chicago starring Bow Wow and Nick Cannon. “And I changed the name because no one knew about Roll Bounce. I won't say no one knew. None of my white friends, and I mostly have all white people in the group. And everyone was all ‘Oh, what's Roll Bounce? What’s Roll Bounce?’ I was so agitated. I’m like ‘You know what, I'm just going to change the name to SB Rollers,’ and of course they got that.”

He says he’s gotten negative feedback from his friends back in Miami for skating with a bunch of white people, but he wants the future of roller skating to be inclusive.

“I'm not going to say, ‘You can't skate because you didn't build this, you didn't create this foundation.’ I’m trying to teach and show people that you can bond with people of different colors. And it's way more fun to see people outside of your own race doing what you can do, and sometimes even better.” 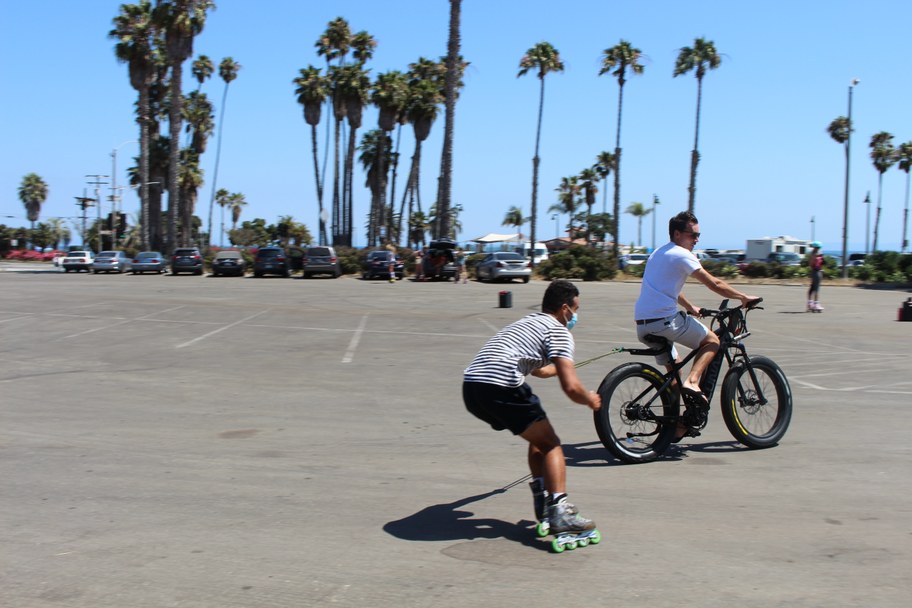 “You have a skateboard, a bicycle, rollerblades. It doesn't matter. All all welcome,” says Terrance Brown, who started SB Rollers. Photo by Kathryn Barnes/KCRW.

He tries to honor the history by playing old school soul, hip-hop, and reggae, and pay it forward by promoting Black skaters and Black-owned skate businesses.

And he welcomes everyone who stops by on Sundays: all ages, all colors, all experience levels, all types of wheels.

The legacy and resurgence of African American roller skate culture

Learn to roller skate and connect to an African American legacy

Terrance Brown is the first one to arrive at a vacant parking lot near the beach, across from the Santa Barbara City College football stadium.

In ‘Hatemonger,’ a portrait of Stephen Miller from Santa Monica to the White House

Stephen Miller is the architect of some of President Donald Trump’s harshest immigration policies. He grew up in Santa Monica, north of Montana Avenue.