Why do Angelenos love grunion runs? On full and new moons, during their spring and summer mating season, thousands of grunion ride the high tide up onto the beach to spawn. It's called a grunion run, and KCRW’s Steve Chiotakis went to Cabrillo Beach to try to catch the spectacle along with Lila Higgins, senior manager of community science at the Natural History Museum of Los Angeles County.

It sounds like a monster from the deep, but grunion are actually little silvery fish.

“They are between 5 and 7 inches long,” said Higgins. “They have a beautiful silvery blue side, so they really flash in the moonlight which makes them easy to see.”

Why do they come up to the beach?

“The females lay their eggs and the males let out their milt, which is the male reproductive fluids, and that will fertilize the eggs external to the body of the female fish as she has basically got her entire body below the sand level,” said Higgins. “Those eggs will be fertilized and they will be safe under the sand until the next high tide happens.”

California Grunion are one of the only fish species in the world that come completely out of the water to lay their eggs.

“Lots of fish lay their eggs in the open ocean, [but] imagine all of the predators that are out there wanting to eat you,” said Higgins. “A lot. So grunion have evolved to, instead of laying their eggs in open water, come up onto the sand and protect the eggs. Yes, there are still some predators like birds who will eat the eggs in the sand, but compared to out in the ocean, maybe less predators for them to deal with, and that's why we think that they've evolved this way.” 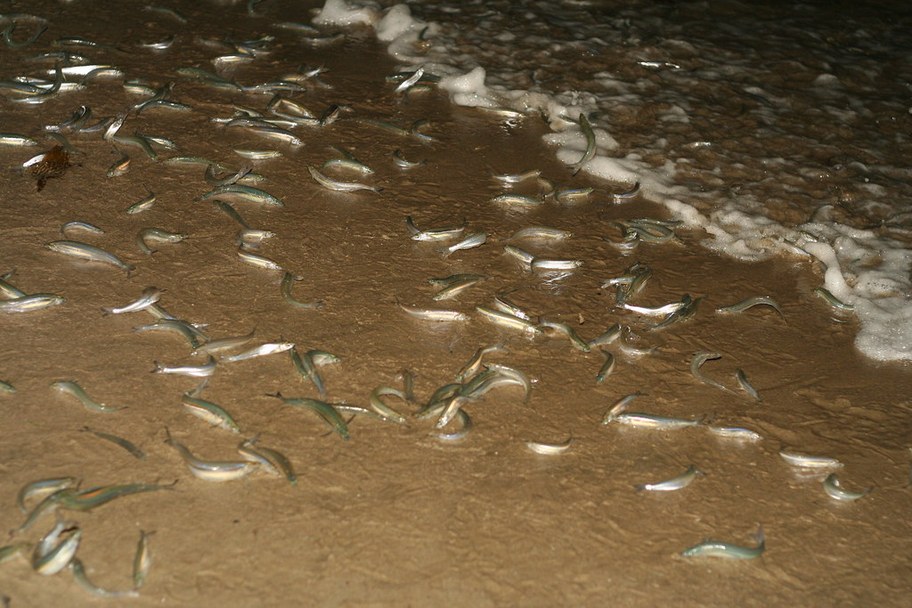 Sometimes the grunion don’t show up. Why?

First, grunion “scouts” come up on the beach to let the rest of the grunion know that it's safe.

“Scientists aren't 100 percent sure what the signals are for safe or not,” said Higgins. “There's still some research to be done there. But the scouts would, if they found it safe, go back to the colony and communicate it's safe to come up on the beach.”

Sometimes, there’s no grunion to be found.

“Nature is unpredictable, but that's also the beauty of it.”

Why do people love grunion runs?

“This reminds me of my childhood because my parents used to take me here when I was a teenager and it was so much fun,” said Catherine Caporale, who was on Cabrillo Beach with her daughter. “It's a wonderful interlude on the beach and it's fantastic to see nature alive, in vivo.”

When’s the next grunion run?

Grunion season lasts through August. They spawn at night on full and new moons. The next opportunity to see them is August 1st, after sundown. Here’s a schedule.

Searching for the elusive grunion in San Pedro

Why do Angelenos love grunion runs?

On full and new moons, during their spring and summer mating season, thousands of grunion ride the high tide up onto the beach to spawn.

LA County’s controversial Sheriff Alex Villanueva may have to open up to outside investigation of tattooed deputies accused of maintaining a culture of corruption and...

Should Metro get rid of a car lane to make way for a dedicated bus lane?

Metro LA plans to run a new bus line on a dedicated lane that would connect North Hollywood to Pasadena by way of Burbank, Glendale, and Eagle Rock.