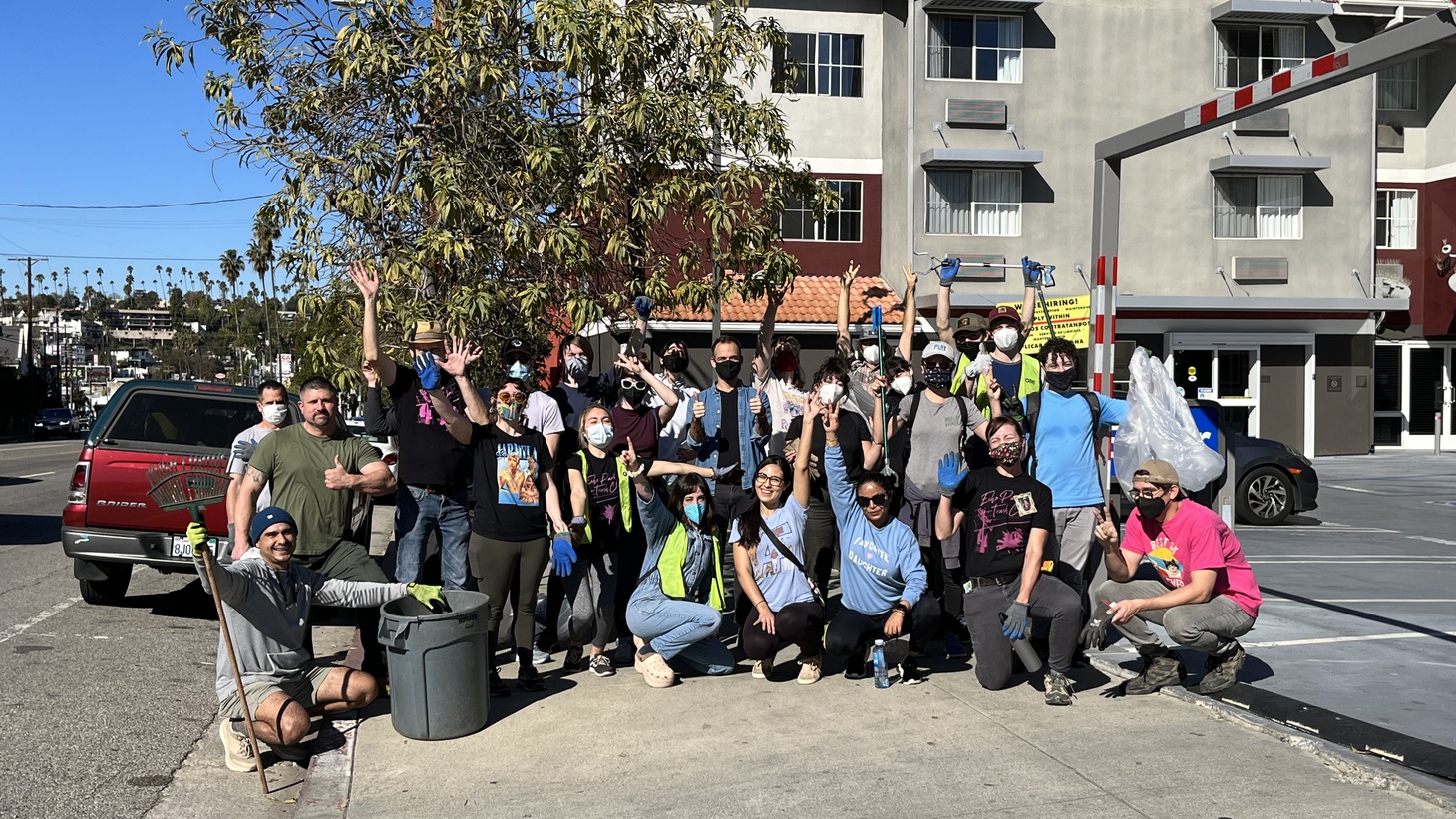 The Echo Park Trash Club focuses on keeping their neighborhood clean while respecting people who are unhoused. Photo by Cassie Faulding.

Last weekend, the fencing around Echo Park Lake was taken down, and a sign was erected that said, “Welcome to People’s Park LA.” The city originally installed the fence more than a year ago when it was “renovating” the park — after sweeping out unhoused residents there, promising to find them longer-term housing. (That promise has gone largely unfulfilled.)

Regardless of what’s happening at Echo Park Lake, there are still people who want to keep the environment clean, while saying they’re respectful of those who live on the sidewalks and grass.

The Echo Park Trash Club is made up of volunteers who gather a couple of Sundays a month to do just that — collect trash.

“I used social media to try to learn a little bit more about folks living in my neighborhood. I started using the Nextdoor app to begin with, and so it began by an effort to get to know my neighbors and find out if people would like to work on trash collection with me,” says Erin Fein, the club’s founder.

She started the club in 2020 after noticing that the trash in Echo Park started becoming a bigger problem, particularly during the COVID pandemic. Fein also yearned for a sense of community ever since she moved to LA from Brooklyn and the Midwest.

Initially, members picked up cigarette butts and small pieces of litter that people threw out of car windows.

As the group grew, they coordinated with the city to get a trash truck to go to their cleanup events. Then they decided to go to encampments.

“If you imagine an encampment area, like an apartment area, and if you think about the type of trash buildup that occurs just on a normal week, and then imagine that there was no trash servicing for that house or that apartment, imagine what that would look like. It would very quickly build up into large piles of trash,” Fein explains.

Another challenge: Many unhoused people developed fear and suspicion due to the handling of sweeps. Fein says members had to make their intentions really clear. “It's taken us some time to build trust in our neighborhood that what we do is distinctly different from that [sweeps].”

“We would love it if we could have a trash truck that was painted a completely different color and had rainbows and suns and hearts on it, and that we could have like a community truck, but that's not something we've been able to achieve just yet. … But just speaking with people … really goes a long way.”

LA’s recently expanded “anti-camping” law will have a disproportionate impact on Black Angelenos, who make up nearly 45% of the city’s unhoused residents.