Just south of downtown, near the corner of Washington Blvd and Grand, is the campus of LA Trade Tech. Inside a big white tent on an open lot, companies recently set up rows of tables with piles of brochures and job applications. It was the first ever job fair for transgender people in South LA.

Studies show that trans people are three times as likely to be unemployed as the overall U.S. workforce. According to the 2015 U.S. Transgender Survey (from The National Center for Transgender Equality), “30% of respondents who had a job reported being fired, denied a promotion, or experiencing some other form of mistreatment in the workplace due to their gender identity or expression, such as being verbally harassed or physically or sexually assaulted at work.”

Greater LA speaks with transgender job seekers, including Misha Valentina, who has worked as an aesthetician, makeup artist, model, caretaker, and sex worker. She says she’s faced discrimination at workplaces in the past.

“I was getting my hours cut for no apparent reason. I was performing well. I was one of two aestheticians in the whole store, and I was one of two people that would hold down the entire skincare section,” she says. “But they were cutting my hours and treating me less-than because my manager was totally homophobic/transphobic. And I'm not the first person that he's done this with.” 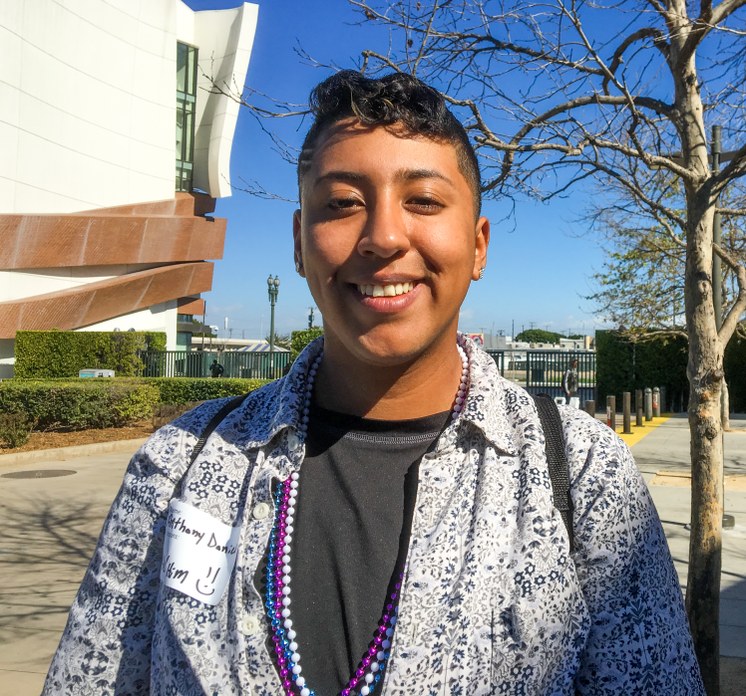 “I've been homeless since November living out of a car that my parents are letting me borrow for right now. And I'm still struggling trying to get my life together,” says Anthony Daniel, a fast food worker and cable installer. “I have been discriminated in every single workplace I have worked in by at least one person.”

Bella Coffin worked as an audio engineer for 10 years. She says, “When you have at least a certain set of qualifications that are desirable, and then you go for months at a time with multiple interviews and nobody's hiring, it's like, well is it because I am not good enough, or is it just simply that employers are uncomfortable with me being trans? That's something I'll never be able to fully know, which is unfortunate.”

Organizers of the job fair said afterward that 76 employers and 772 job seekers came to the event. That included people with Master’s degrees, military experience, and management experience.

For employers, the fair was a way to find workers from diverse backgrounds, and learn what to do when an employee begins transitioning from one gender to another, or changes their preferred pronouns. And so, the fair began with an inclusion training session for employers.

Will there be other events like this? Organizers say it was the largest trans career event ever hosted in Los Angeles, and they want to make it happen annually.

Just south of downtown, near the corner of Washington Blvd and Grand, is the campus of LA Trade Tech. Inside a big white tent on an open lot, companies recently set up rows...

Organizers hope to make the South LA transgender career fair an annual event. We speak with the job fair organizer about why bringing trans people and prospective employers...

The showdown between LA Sheriff Villanueva and the Board of Sups

Not everyone trusts the man in charge of running the nation’s largest jail system. LA County Sheriff Alex Villanueva has been butting heads with Board of Supervisors since...