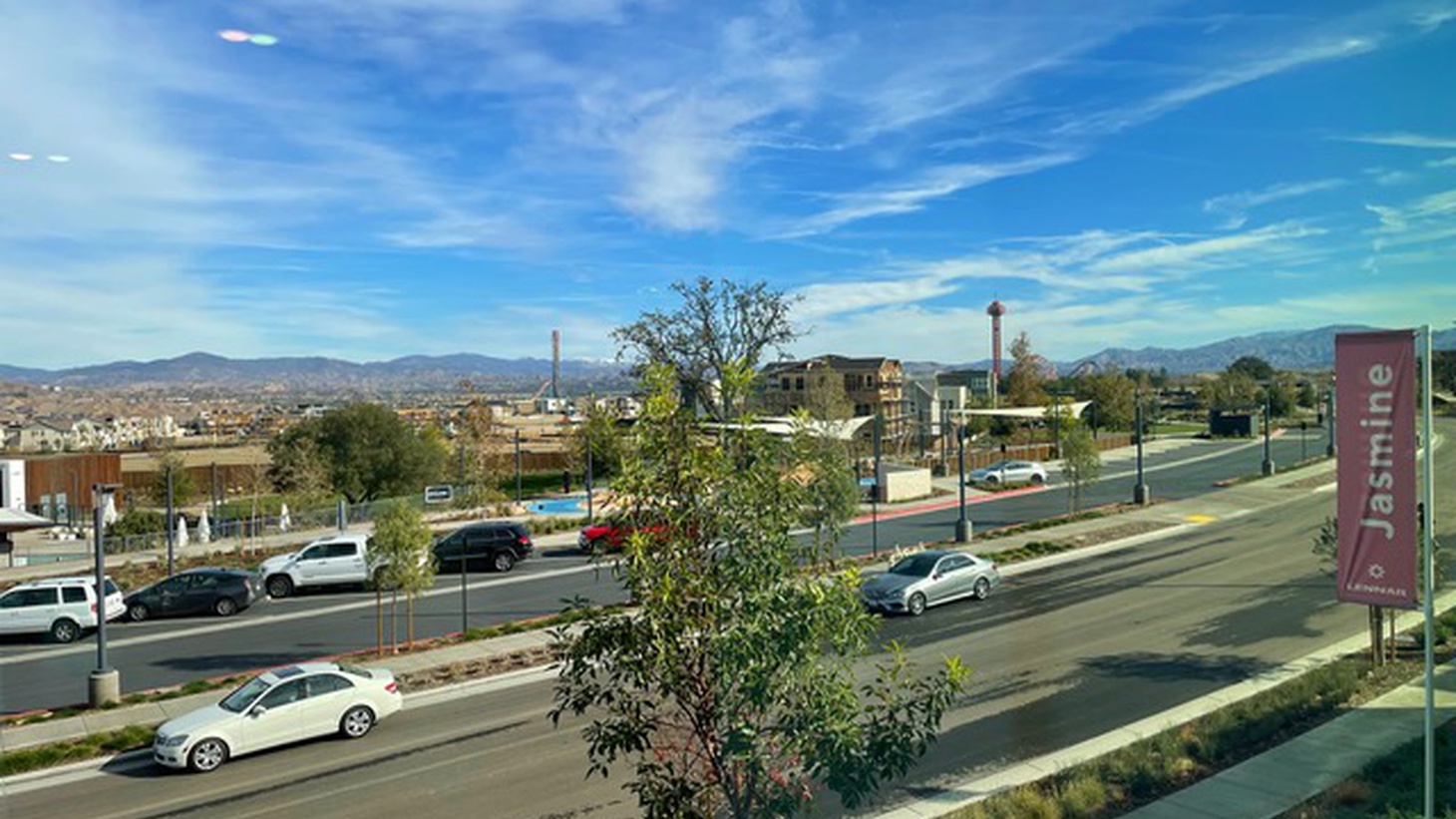 Erika and Oscar Myles are buying a home this month. They live in Los Angeles now, and they’re considering picking up and moving north to a new development called Five Point Valencia in the Santa Clarita Valley.

It would come with a quieter neighborhood and a stunning view of the mountains — and the nearby roller coasters at Six Flags Magic Mountain. 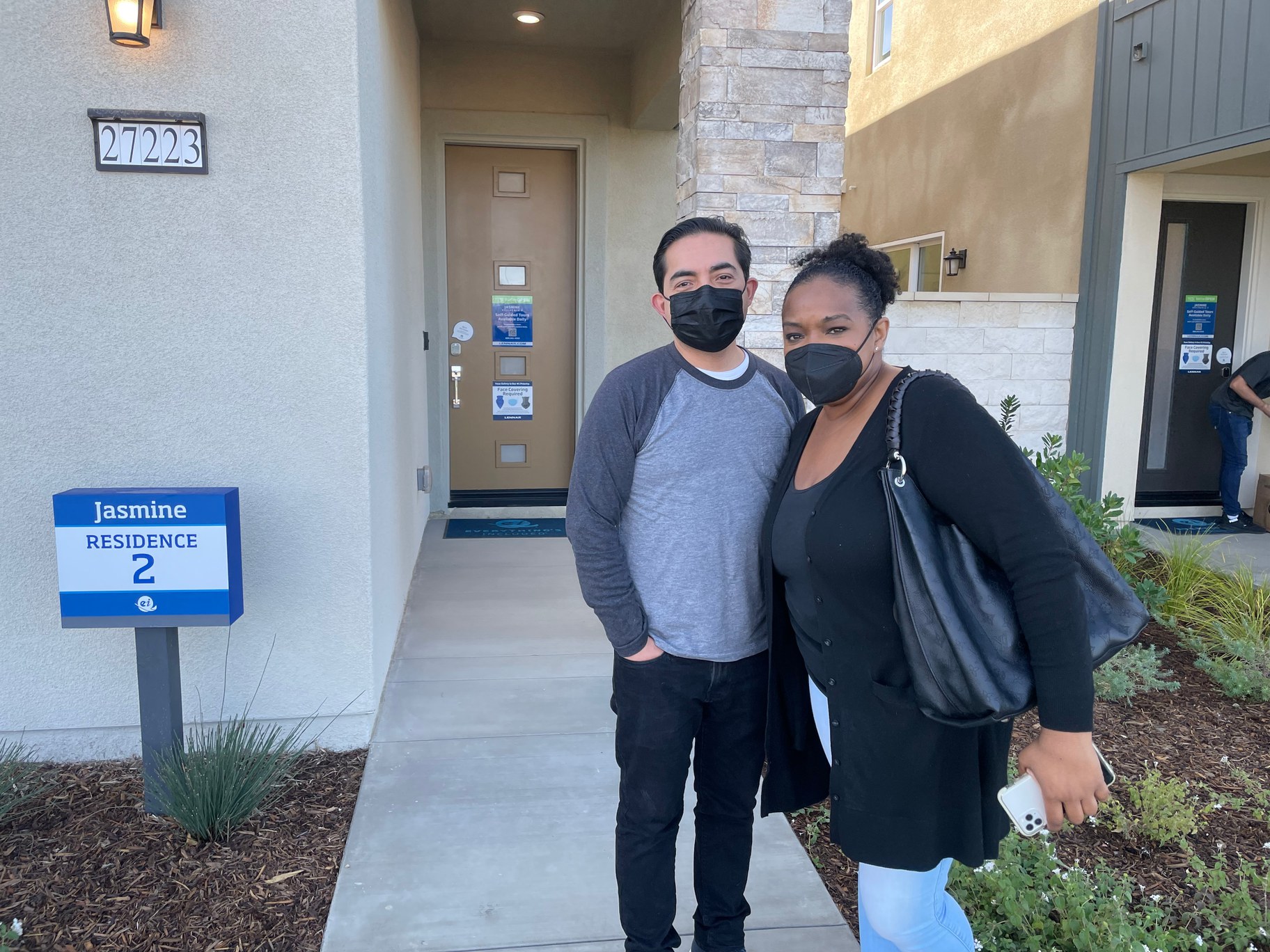 Oscar and Erika Myles say they’re excited to tour new homes, and the fact that they’re net-zero is an added bonus. Photo by Caleigh Wells.

“Away from the hustle and bustle, it's not as busy out here,” Erika Myles says. “And then you get this beautiful mountain view … we don't really get that in Los Angeles. So we figured it would be nice.”

It would also mean their carbon footprint would disappear. The community is “net-zero,” meaning it’ll cut out or offset all of its greenhouse gas emissions.

So far, only about 100 people have moved into Five Point Valencia. Half the buildings are just wooden frames. When it’s complete, it will be a village with more than 21,000 homes. 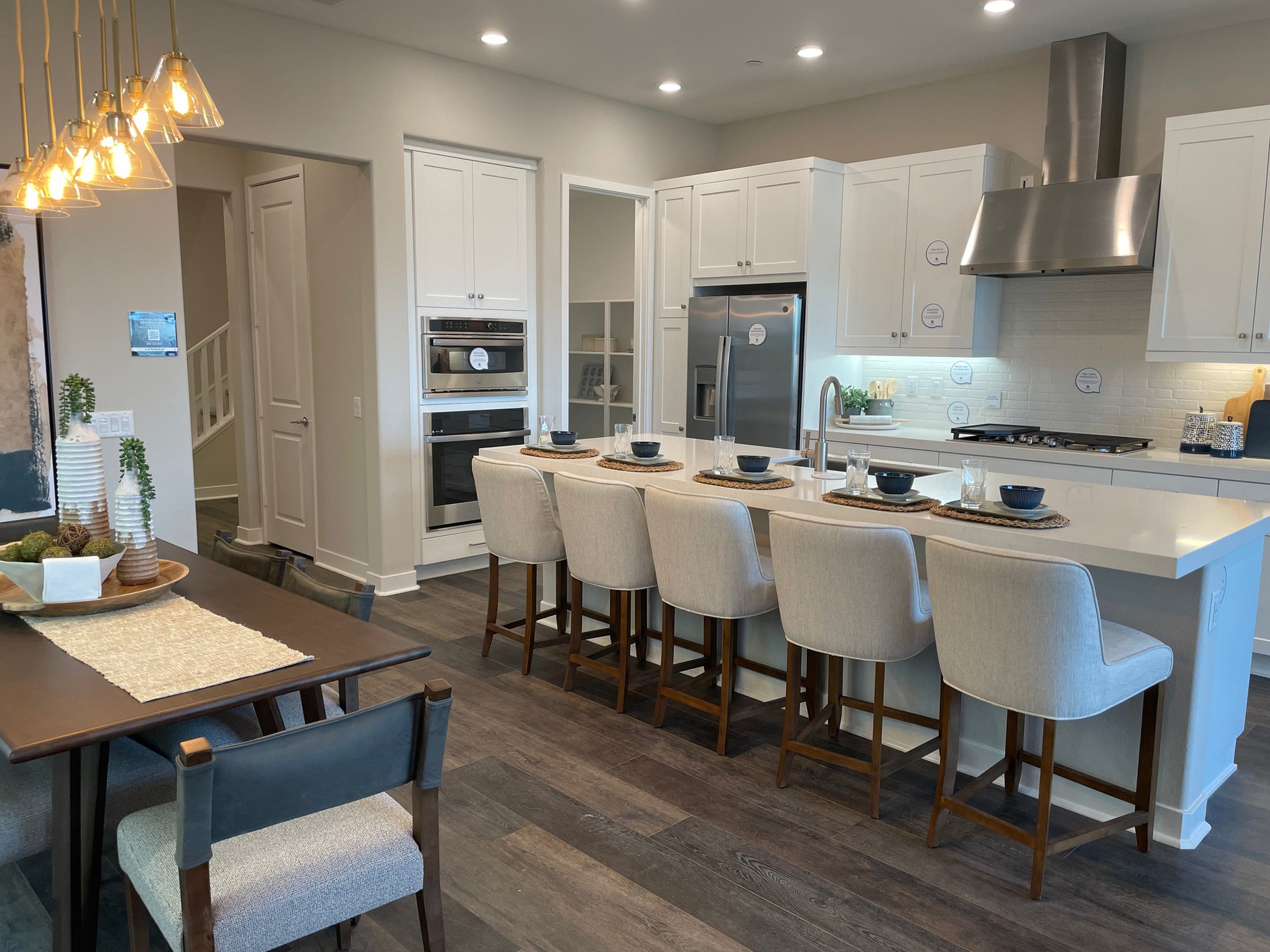 This kitchen’s lights are largely energized by solar panels on the roof. The greenhouse gases emitted by the gas stove will have to be offset elsewhere. Photo by Caleigh Wells.

Everything about the development says “new.” The young trees are short and supported by splints. The landscaped hills are mostly dirt dotted with new, tiny plants. The roads are dark and smooth, and most of the vehicles on them are helping to finish constructing half-built homes.

That’s what lured in the Myles family.

“It's a convenient, cool thing,” she says. “It wouldn't be a deal breaker. But, I mean, I like the fact that it's there.”

How to build a net zero community 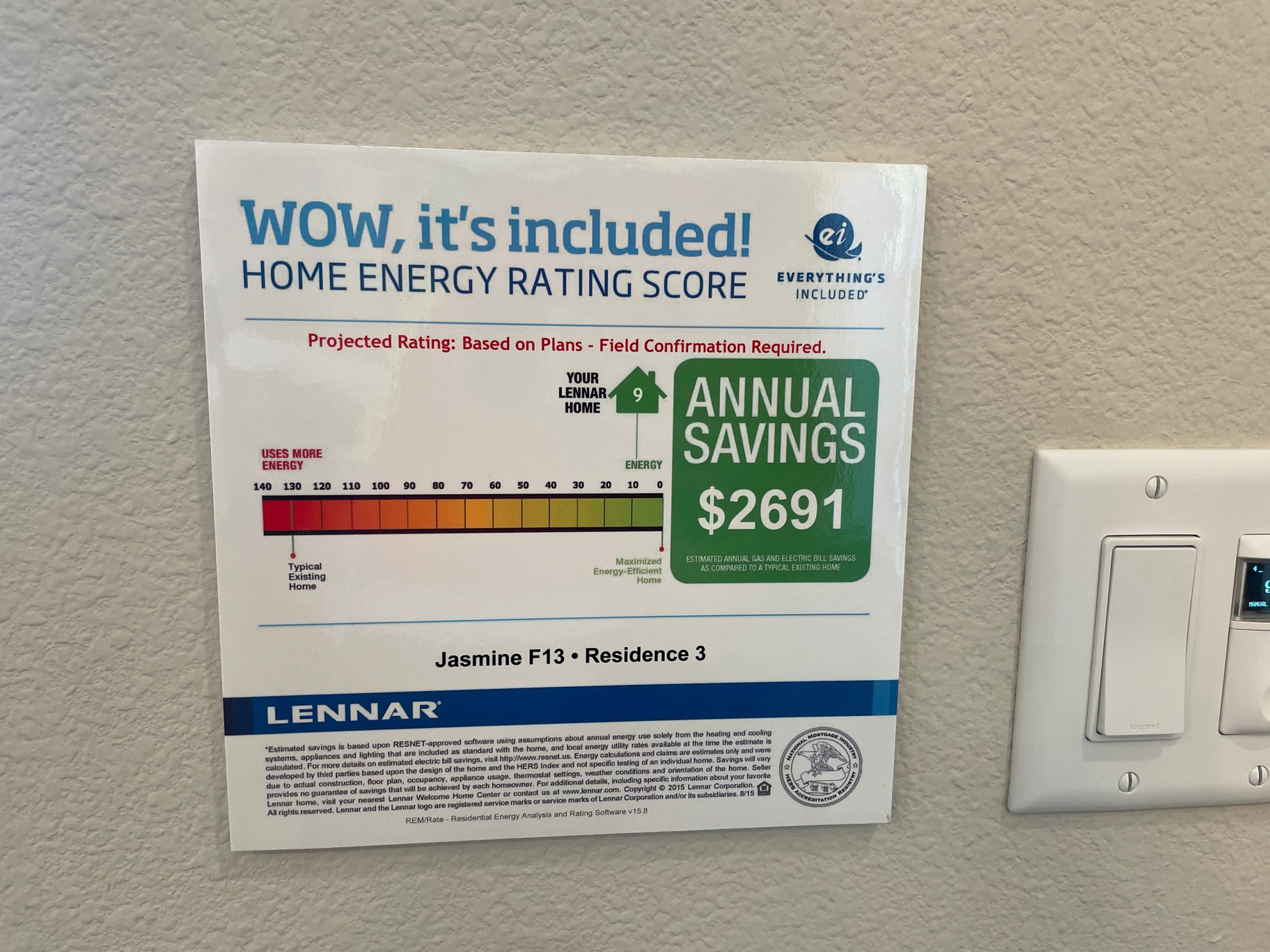 “Every single home we build is Energy Star qualified,” says Craig LeMessuirier with KB Home, one of five companies building homes in the development.

“It's about the construction techniques, the materials, all the things that you wouldn’t even think about, the insulation, any penetrations in the home, your caulking and making sure there's no air flow in and out of the home.” 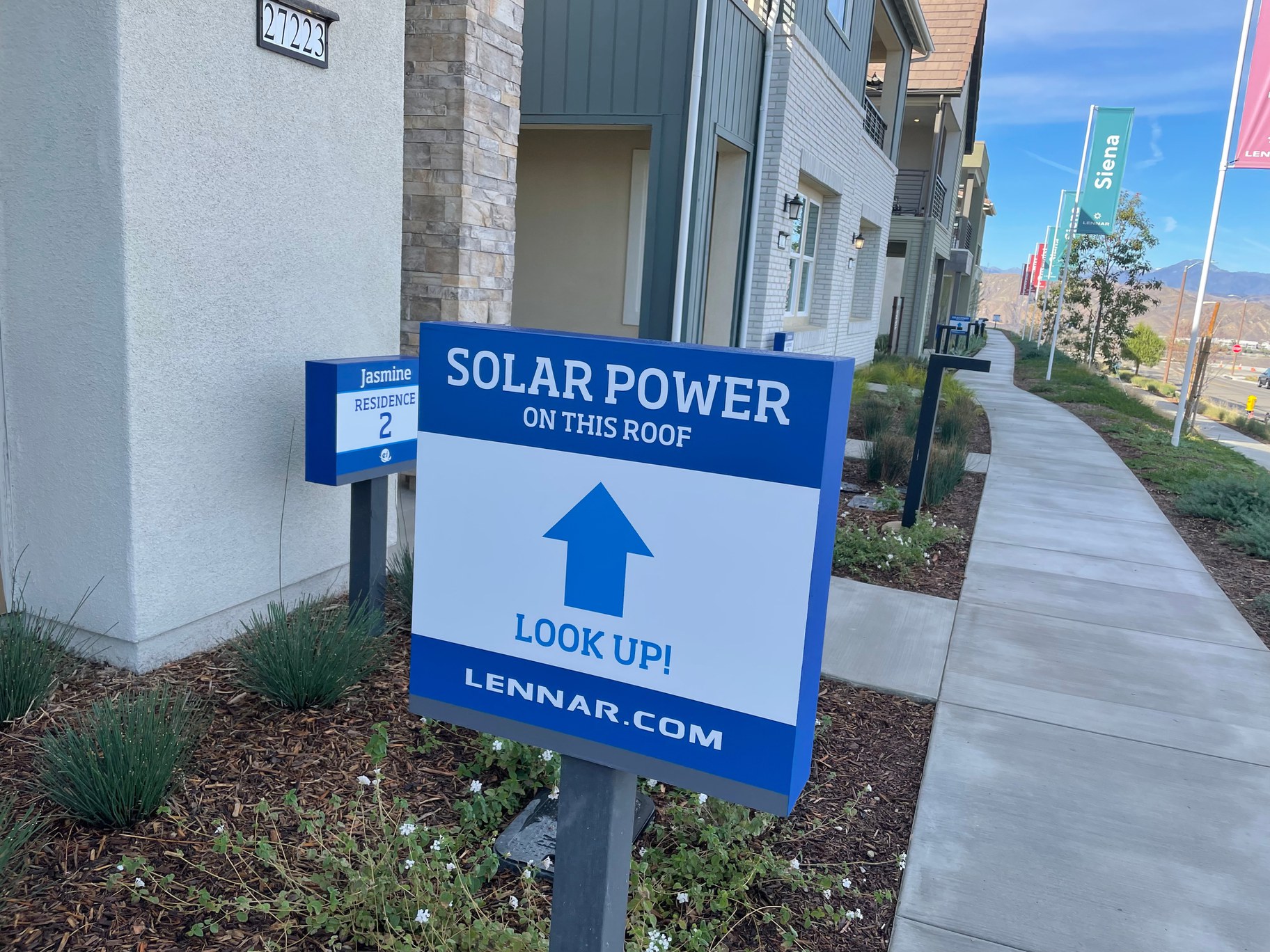 Solar panels will supply electricity in the homes at Five Point Valencia. Photo by Caleigh Wells.

Once the home is as energy efficient as it can get, energy needed in the community comes from renewable sources.

If the Myles family buys a home here, their electricity will partially come from solar panels, the drought-tolerant landscape will be watered with recycled wastewater, and they will soak in a community pool heated by geothermal energy. Part of their mountain view includes 10,000 acres of preserved native habitat nearby. 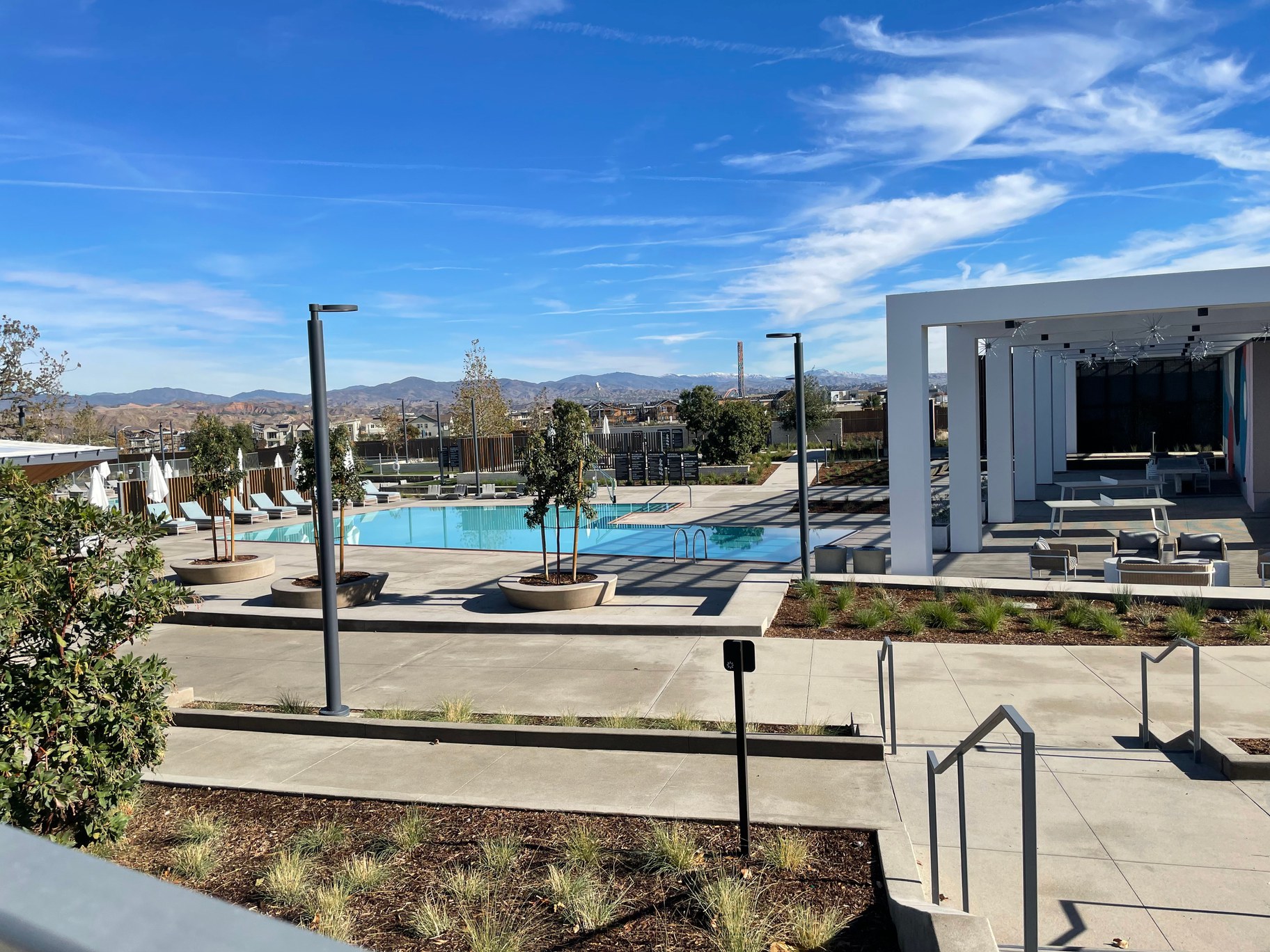 The development plans to offset any greenhouse gases it does produce by installing solar panels in disadvantaged areas of LA County, capturing methane at a California dairy farm, and replacing wood cookstoves in Africa with clean-burning ones. 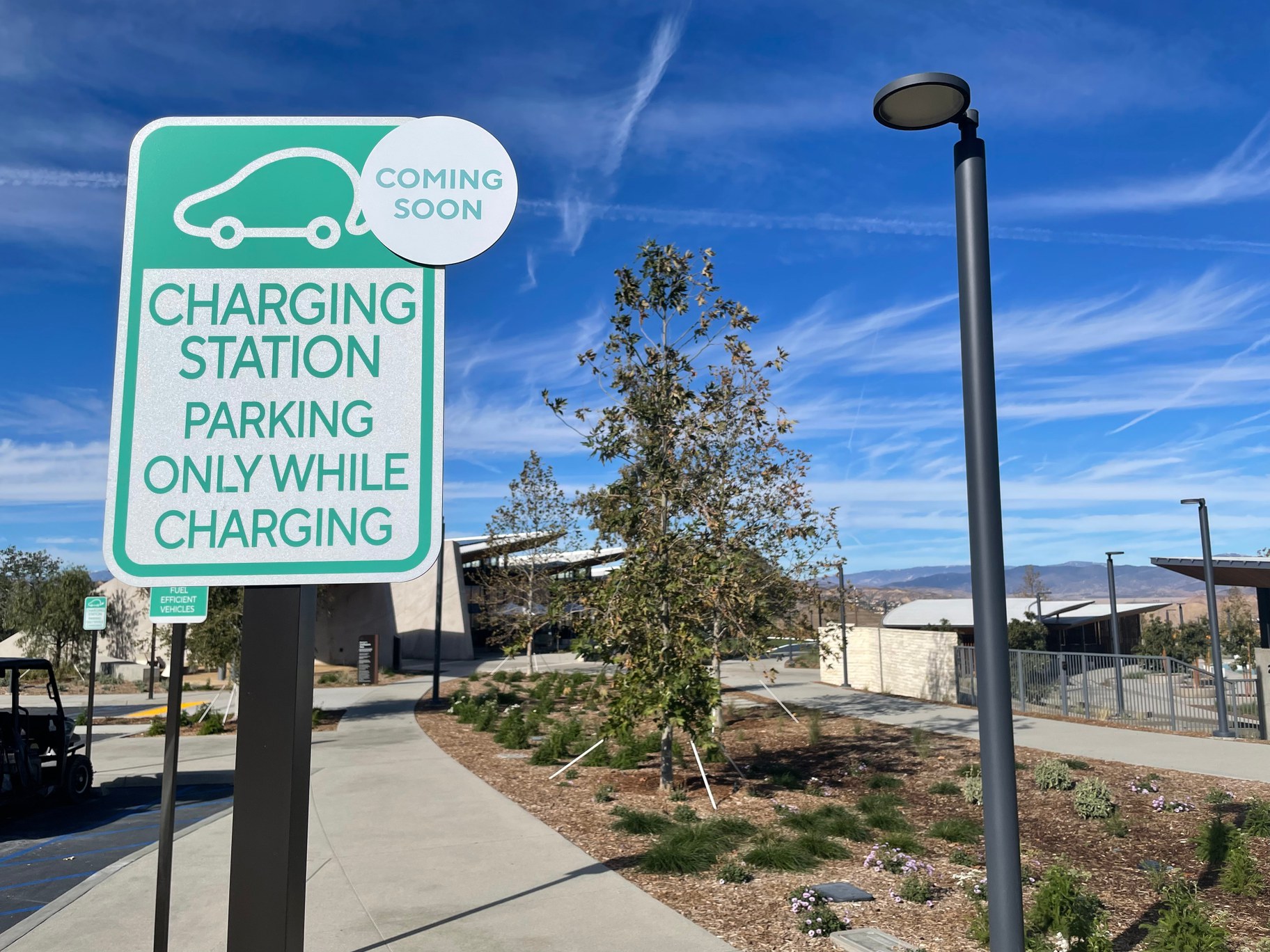 When the Myles family steps out of their new home, they will be encouraged to use their neighborhood electric vehicle, which is similar to a golf cart, to get around the development.

But if they drive gas powered cars, their commutes to work will produce greenhouse gas emissions. Erika Myles could work from home some of the time, but Oscar would be pumping extra carbon into the air every day, commuting to and from Los Angeles.

“See, that’s the problem,” Erika Myles says. “It is … an additional 38 minutes with no traffic.”

Transportation is the biggest source of greenhouse gas emissions in California. That’s why Five Point Valenica would make it as convenient as possible for the Myles family to drive an electric car. Every home in the development comes with an EV charger, and there will be another 2,000 chargers in shared parking spaces. 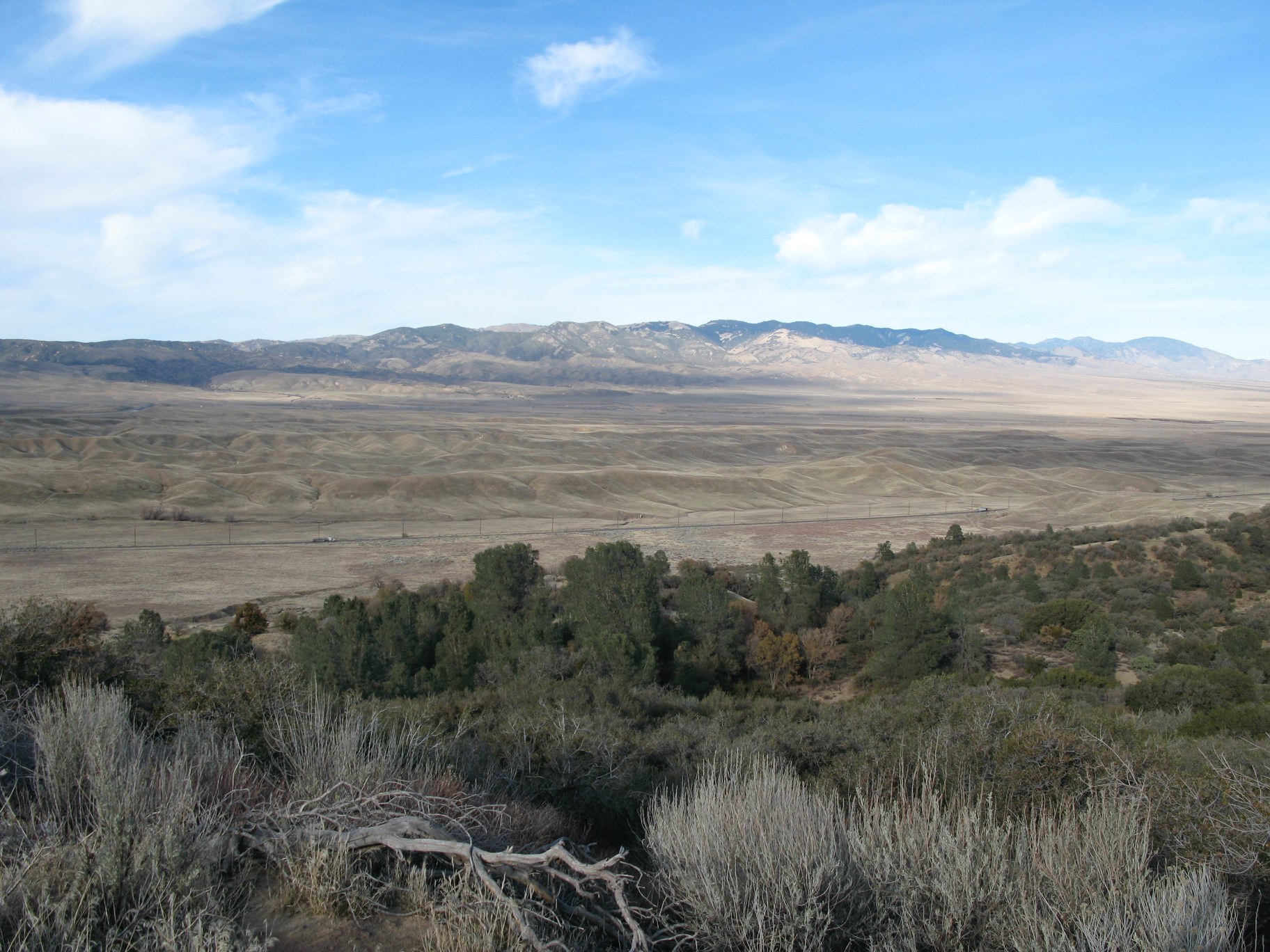 It will be about 30 years before nearly 20,000 homes and more than 10 million square feet of commercial space will be built in Tejon Ranch. Photo courtesy of Tejon Ranch Company.

The dreaded “super commute” is an even bigger sticking point for the more rural Centennial development at Tejon Ranch. It’s on the LA-Kern County border, about halfway between Santa Clarita and Bakersfield. After multiple lawsuits over environmental concerns, they promised they would be a net-zero community, too.

“It will consist of 19,300+ residential units,” says Barry Zoeller with Tejon Ranch Company, the company that owns the land. “It also includes 10.1 million square feet of commercial, industrial and retail space. So it's your schools. It's your parks. It's your research and development facilities.”

The developers are installing electric car chargers and throwing in a $5,000 incentive for residents with electric cars.

Bryn Lindblad with the environmental nonprofit Climate Resolve says that will hopefully convince about half of residents to go electric. “For the remaining 50% that aren't electric, [the developers are] looking at projects to compensate and mitigate those emissions.”

Construction at Tejon Ranch won’t be completed until around 2050. By then, it will have been 15 years since California banned the sale of new gas-powered cars.

Even if today’s estimates are correct, the developer says the community will generate 500,000 tons of carbon. Half of it will be mitigated in the community with things like solar panels, and the elimination of gas hookups. The other half will be offset with projects that reduce carbon outside the community.

By the time these renderings become reality, the sale of gas-powered cars will be banned in California. Photo courtesy of Tejon Ranch Company.

But offsets aren’t a very popular option. Just like recycling a beer bottle, it isn’t a bad thing to do, but it would be better not to buy the bottle in the first place.

“It's not acceptable for Tejon Ranch to go buy offsets out on the market of projects that are already happening, say, in Africa or Asia. We're trying to get new projects funded to accelerate the speed of addressing climate change,” Lindblad says.

Overtime, as countries get greener, finding places to offset greenhouse gas emissions will get harder. That’s partly why Climate Resolve is overseeing the establishment of a third-party nonprofit organization that will monitor the development’s progress.

Even with all those variables, Lindblad says she’s feeling confident the development will follow through on its net-zero promise.

“I think we set up a pretty watertight accountability and monitoring system to make sure that there's not loopholes in the future – that if conditions do change, we'll have a keen group to make sure that net-zero commitment is still being upheld.”

Cutting or eliminating greenhouse gas emissions is the aim of two new developments in Valencia and Tejon Ranch. KCRW looks at how residents are living “net zero” at Five...

The primary election for Orange County’s next district attorney is in June. Candidates Todd Spitzer and Pete Hardin are already duking it out in the public square.