What LA 2028 can learn from Tokyo Games: Politics, costs, climate change, and more A sign saying "Arigato," meaning “thank you” in Japanese, is displayed at the end of the Tokyo 2020 Olympic Games closing ceremony at the Olympic Stadium in Tokyo, Japan, August 8, 2021. Photo by Koji Aoki/AFLO SPORT.

Sunday marked the final day of the Tokyo Games. With the closing ceremony behind us, LA is preparing for its own summer Olympics in 2028. It’ll be the third time the torch will burn in the City of Angels. What can we learn from this recent pandemic-fueled, audienceless Olympics?

Greater LA hears from a Tokyo Olympic athlete, a professor, a former City Council member, and an activist. (LA28 organizers declined to participate.)

According to a poll released in May by Asahi Shimbun, 83% of Japanese residents did not want the Tokyo Games to proceed, and medical professionals criticized the International Olympic Committee (IOC) for their lack of preparations. Yet the games went on.

“What we've seen is almost exactly what the medical professionals predicted, and that is a huge spike in cases outside of the so-called Olympic bubble in the general population,” says Jules Boykoff, a political science professor at Pacific University and the author of four books on the Olympics. “The International Olympic Committee disrespected the will of locals, they didn't listen to the polls, they brushed off the inconvenient concerns of medical experts, and it was really done for the profits.”

Boykoff says 73% of the revenues that flow into the IOC’s accounts come from broadcasters, including NBC, and another 18% coming from corporate sponsors. “So when nine out of every $10 flowing into the International Olympic Committee's revenue stream come from those accounts, it makes perfect sense why they would be willing to have a made-for-TV event, even if that did mean putting global health at risk, putting athlete health at risk.”

Most athletes want to compete, no matter what 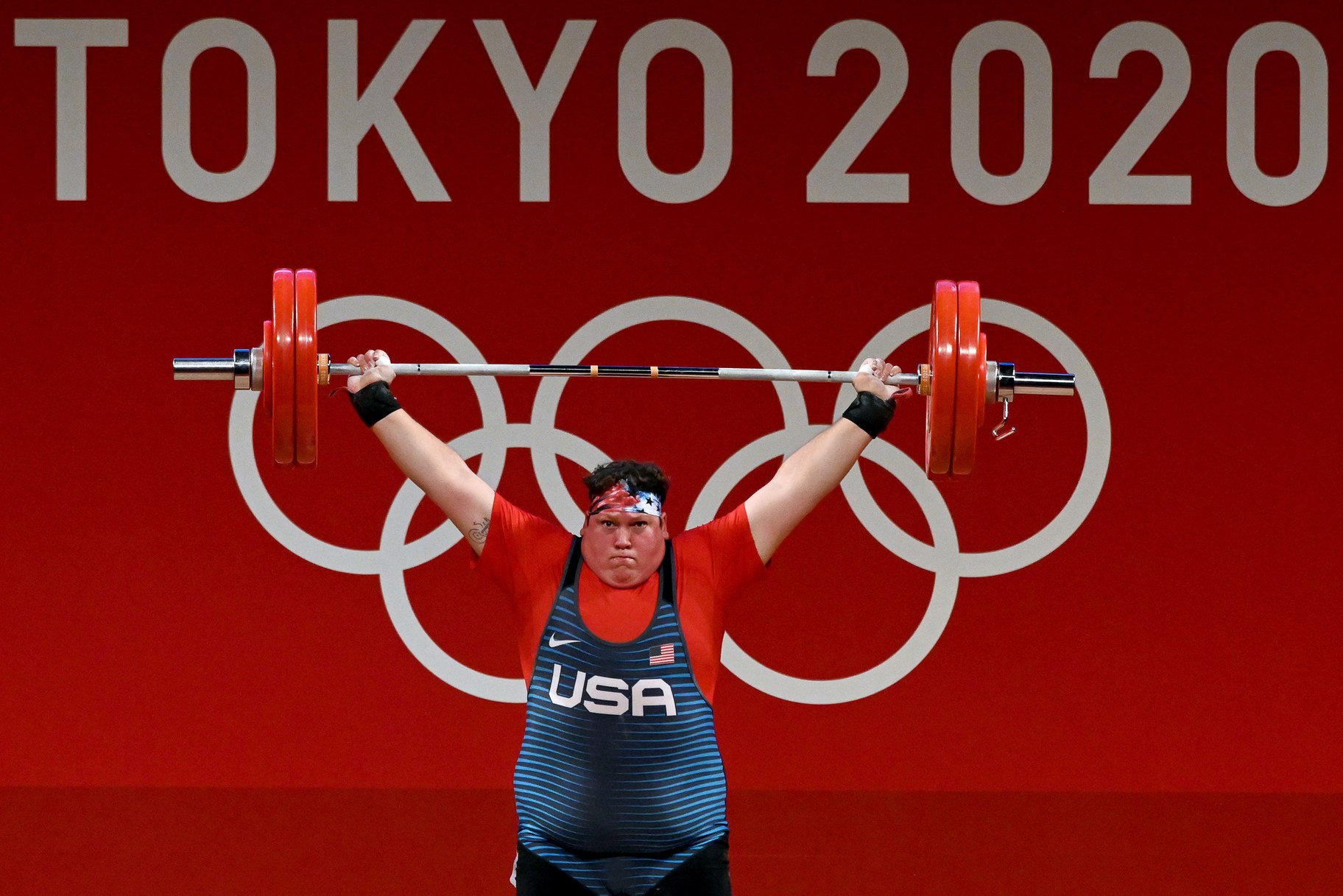 Sarah Robles, a weightlifter who competed in the Tokyo Games, says despite safety concerns, she didn’t hear a single athlete say they didn’t want the games to proceed. “We don't want to be the 1980 Olympic team, where you qualified and then you effectively could not actually represent your country,” she says, referring to the Moscow Games. “We actually want to be on that stage, and we want to perform, and we want to do our best and really test ourselves and be part of the whole Olympic movement.”

The price tag of LA 2028 Olympics will balloon 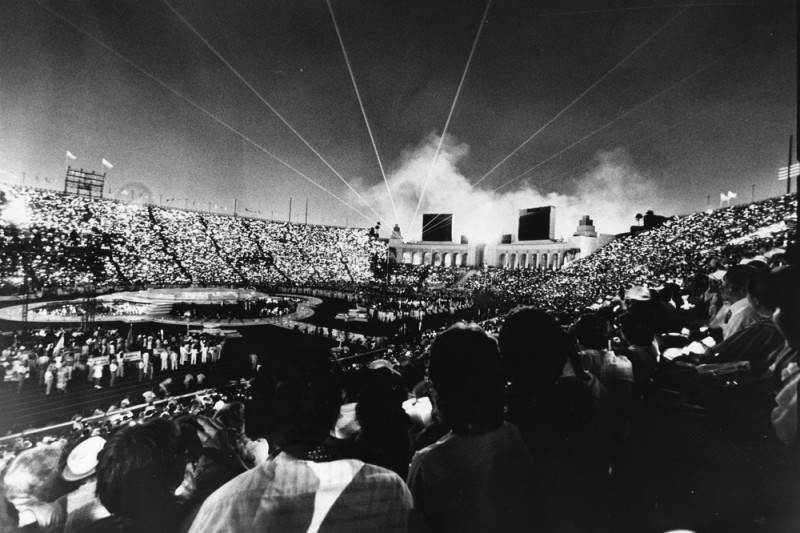 Thousands of people packed the Coliseum to watch the 1984 Olympics closing ceremonies, which ended up netting $250 million in profit. LA 2028 may not. Photo courtesy of LA Public Library/TESSA.

The price of the Tokyo Games skyrocketed from the projected cost of $7.4 billion to a total cost of $15.4 billion. Boykoff says LA should prepare for similarly enormous rises.

“The price tag of the Los Angeles 2028 Olympics has already escalated and we're barely into the process,” he says. “Originally, it was $5.3 billion. They adjusted it upwards to $6.9 billion, and that doesn't even count the billions upon billions that will be needed to securitize the games.”

LA is on the hook for that bill, which was not the case during the 1984 Games. Zev Yaroslavsky was a member of the LA City Council at the time, and remembers it well.

“The most significant difference between ‘84 and the current state of affairs is that in 1984, the City of Los Angeles refused to sign the guarantee that the International Olympic Committee demands of every host city, and that is the guarantee that [the city] will cover all expenses,” he says.

That means if a big international event, like a war or another pandemic,  causes the 2028 Olympics not to reach its assumed revenue, the city will incur the financial damage.

Prepare for extreme heat in 2028

Boykoff says that climate change will continue to “ravage California” if people don’t do anything to prevent it. He says that “global heating is not some futuristic abstraction, a parched LA is already feeling its effects.”

California is currently enduring a record-breaking drought, and seeing record temperatures up and down the coast, reaching triple digits in LA County this summer. And now, a recent report from the United Nations, the Intergovernmental Panel on Climate Change (IPCC), guarantees that the future will be hotter. So the 2028 Games will likely be played out in hot weather.

Olympic planning should be a democratic process 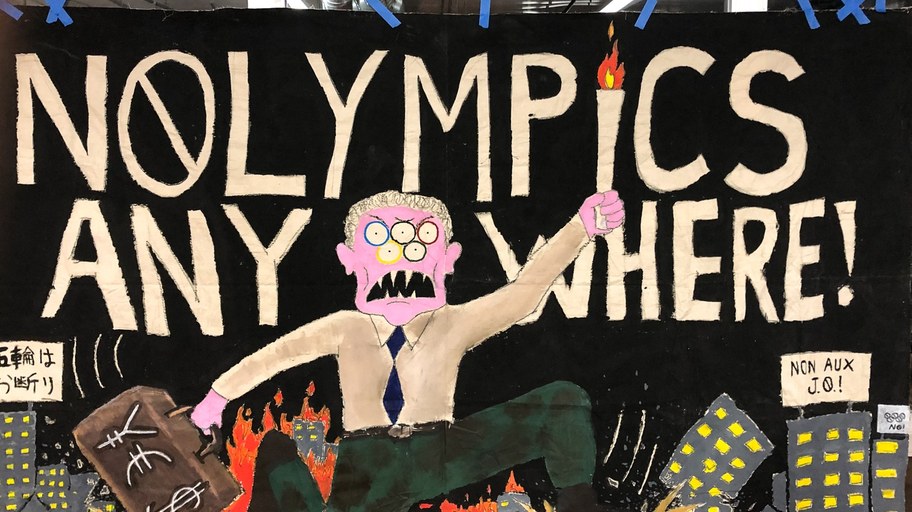 A poster hangs at the NOlympics meeting in November 2019, where activists from Los Angeles and Tokyo talked about the families displaced by preparations for the Olympics. Photo by Jerome Campbell.

Tokyo, Paris, and LA have a common thread: None of them took public input into account before bidding on the Olympics.

“Paris and LA were the last two cities in the running for 2024 because those were the only two cities that didn't hold any type of vote of referendum, or solicit public input from residents,” says Anne Orchier, a member of NOlympicsLA. “This is an incredibly undemocratic process. I think Tokyo has only really illuminated that for the public on a much broader scale.”

Orchier and Boykoff say the LA28 organizing committee should engage with the public if they truly believe in their product. 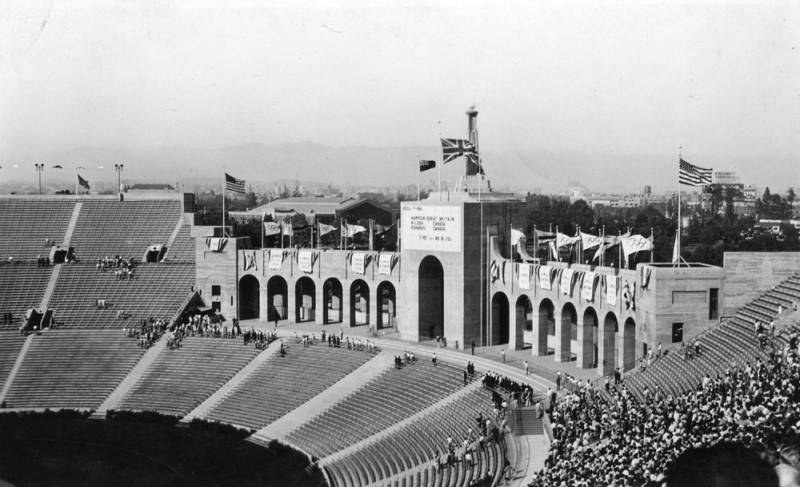 Final results in the 800-meter run at the 1932 Olympics are posted at the Los Angeles Memorial Coliseum, with winners from Great Britain and Canada. Photo courtesy of LA Public Library/TESSA.