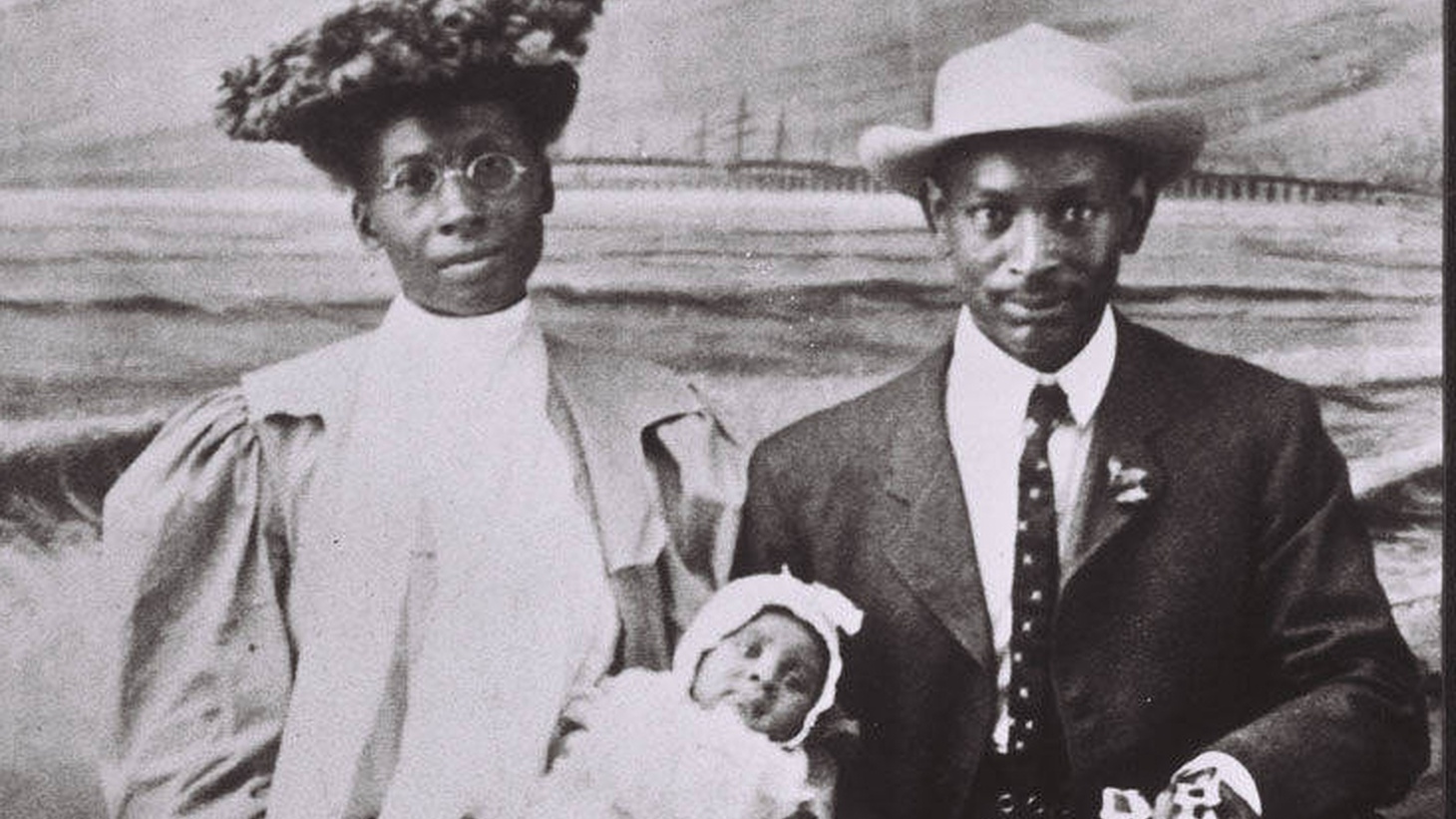 The City of Santa Monica used eminent domain to force thousands of families from their homes and make way for the Interstate 10 freeway and the city’s Civic Auditorium two generations ago. Both “urban renewal” projects targeted Black, Latino and low-income neighborhoods.

Now, more than half a century after using government action to cast the families out, city leaders are acknowledging the historic injustice, and through another government action, attempting to welcome some of them back.

Under a pilot program started this month, up to 100 families who lost their homes in the 1950s or 1960s –– or their descendants –– will get priority access to the city’s scarce supply of affordable rental properties.

Santa Monica’s attempt at public penance comes amid a state-level effort to study and recommend reparations for Black Californians harmed by systemic racism. A September 2020 bill created a task force on the matter, which has met regularly since June. 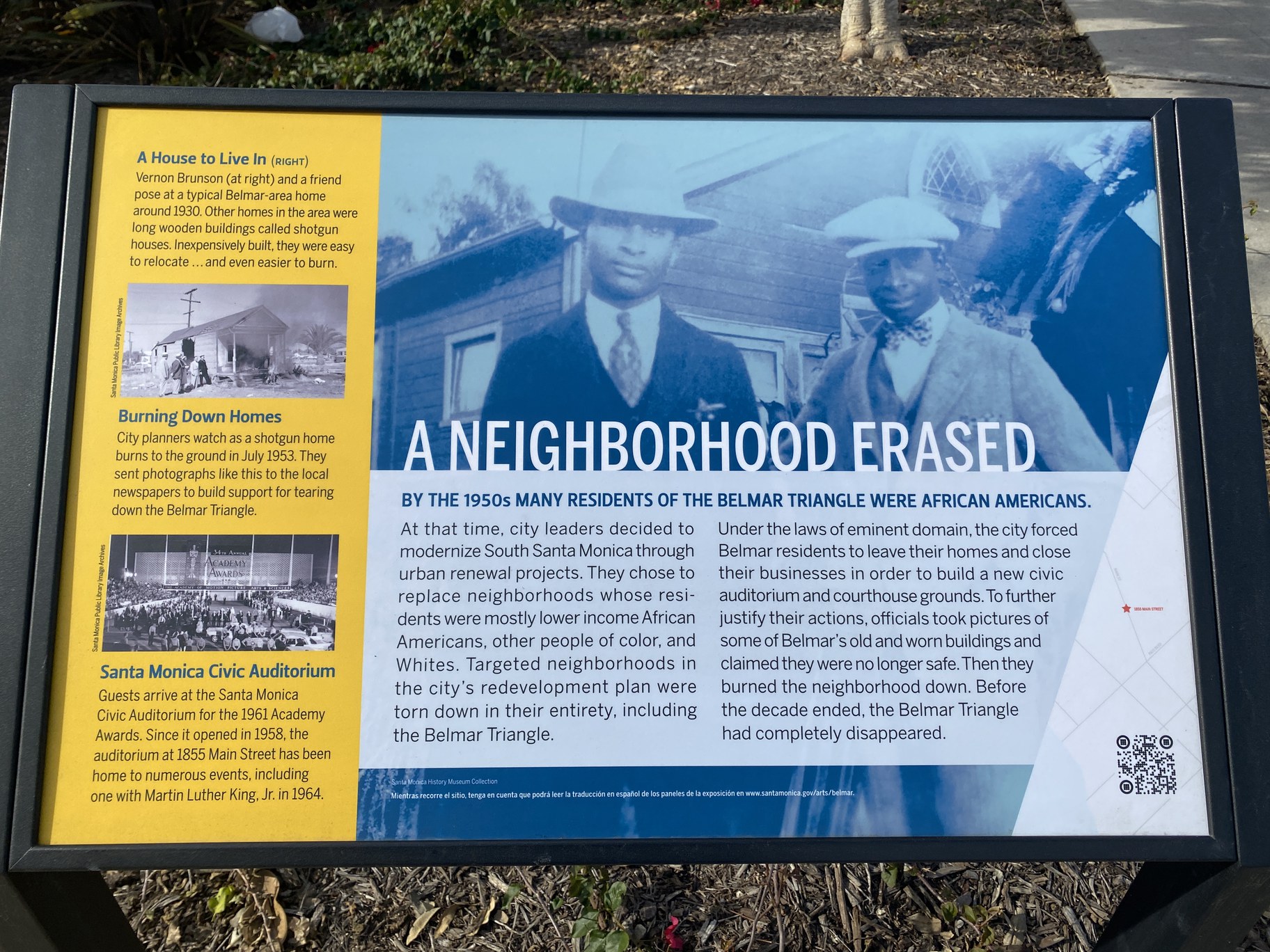 Vernon Brunson is featured on a public history panel at Historic Belmar Park. Brunson’s parents came to Santa Monica in 1905. In the 1960s, his duplex in the Pico neighborhood was flattened to build the Interstate 10 freeway. Now his daughter Nichelle Monroe is applying to Santa Monica’s priority housing program. Photo by Aaron Schrank.

Nichelle Monroe grew up in Santa Monica, hearing the stories of how her grandfather Vernon Brunson’s duplex was taken from him in the 1960s, when the freeway split his Pico neighborhood in two. Monroe’s great-grandparents Selena and Charles Brunson were some of the first African Americans to live in Santa Monica in 1905. Her grandfather Vernon was an architect, and Monroe notices his handiwork all over town.

“What I do remember my grandfather saying was that he didn’t get nearly what the property was worth,” says Monroe. “The property was new, modern. It was like, ‘We got us a little piece, you know?’ And then, the government says, ‘No, no you don’t, Black people.’” 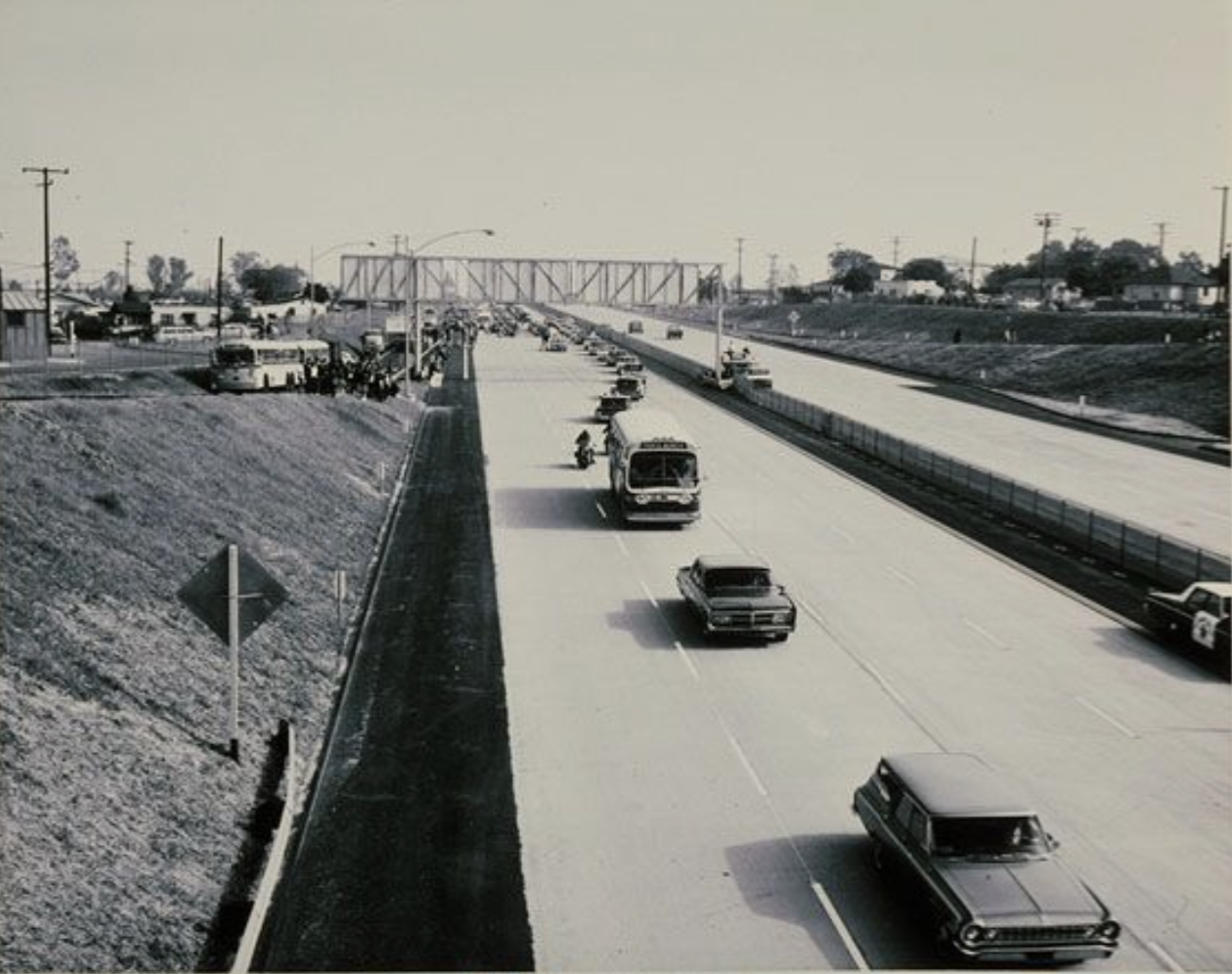 Unlike many other displaced families, Monroe’s grandparents were able to stay in the city when the freeway split the Pico neighborhood. They moved to another property they owned nearby, which became a hub of family activity for decades to come.

“All my fondest childhood memories were in Santa Monica. We would converge upon my grandparents’ house and spend weeks there terrorizing them, having the best sandlot times of our lives,” Monroe says. “I love Santa Monica, I love my beach.”

Today, Monroe lives in Alhambra, but commutes to Santa Monica regularly for her job at Santa Monica College and to attend Calvary Baptist, the historic Black church she grew up going to. Even though her grandparents lost their home before she was born, she says she feels the financial and psychological ripple effects every day. “You feel as though nothing is your own,” says Monroe. “As long as there is a system in place to make sure that you have less, they can change the rules at any time, for any asinine reason. It doesn't have to make sense. It doesn't have to be just. It just is.” 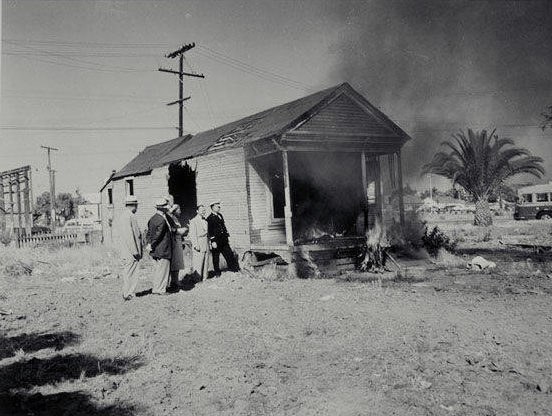 The erased history of families like Monroe’s once living in Pico, Belmar Triangle and other parts of Santa Monica is commemorated in a public history exhibition on permanent display at the city’s new multipurpose athletic field, where the Belmar neighborhood once stood. 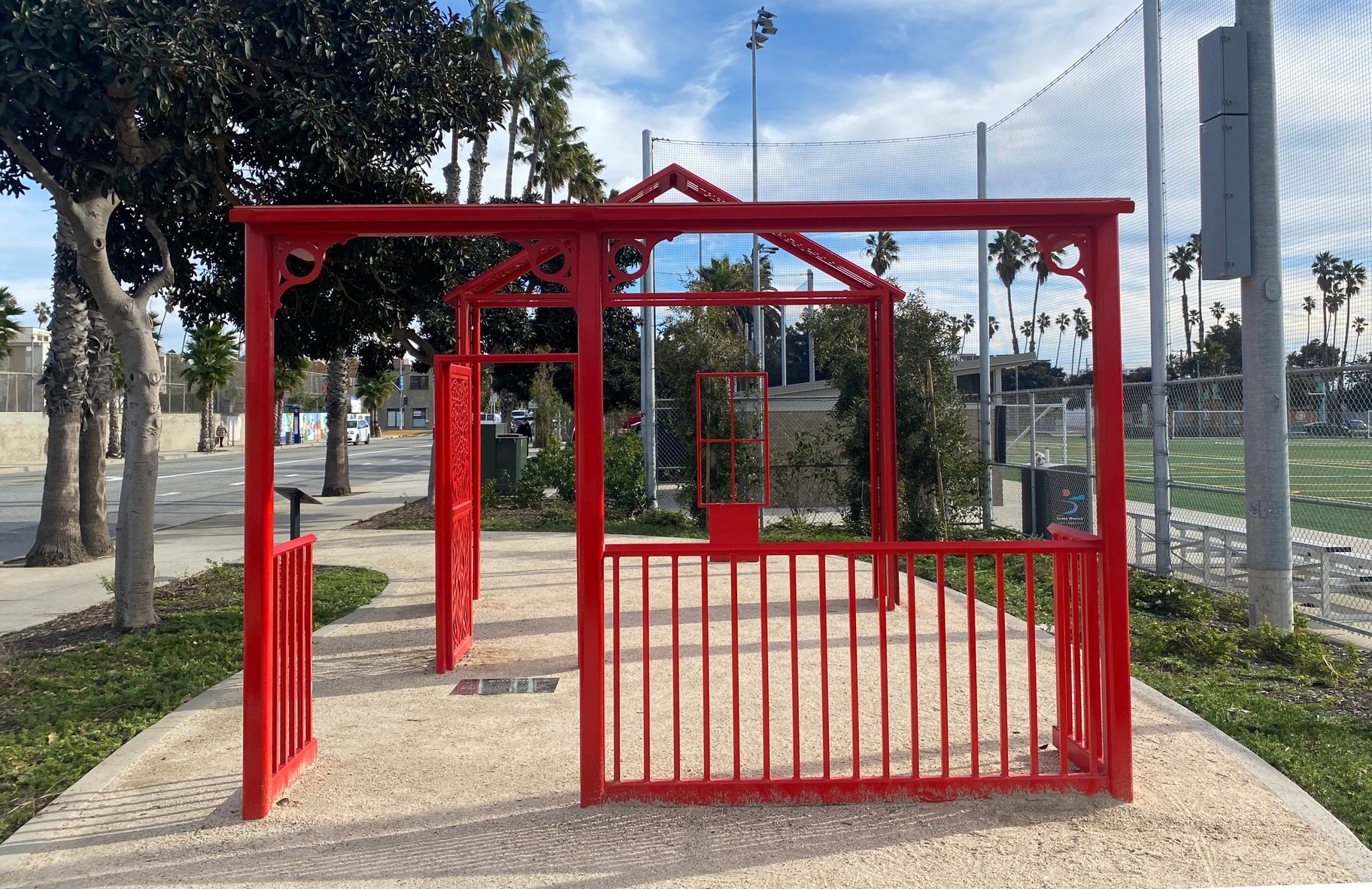 The exhibition at historic Belmar Park includes a sculpture by artist April Banks called “A Resurrection in Four Stanzas,” commemorating the narrow rectangular “shotgun houses” that once lined nearby streets. Many were burned down or bulldozed in the 1950s. Photo by Aaron Schrank.

“If this had remained an area where you had African Americans who were owning property, developing businesses I mean, this could be a whole nother area,” says Alison Rose Jefferson, the local historian who designed the exhibition and first advocated for it. “It may not look all white the way it does now. “

Today, just 5% of the Santa Monica population is Black. The city’s Black population grew steadily for the first half of the last century and more than doubled between 1950 and 1960. Then it leveled off. Today there are actually fewer Black families living in Santa Monica than in 1960, according to Census data, even as the population has grown.

Jefferson says Belmar was a hub of Black-owned establishments such as Caldwell’s Dance Hall and La Bonita Bathhouse.

These businesses are all gone now, but Jefferson helped preserve their stories in 15 informational panels circling a sports field, which the city named Historic Belmar Park. 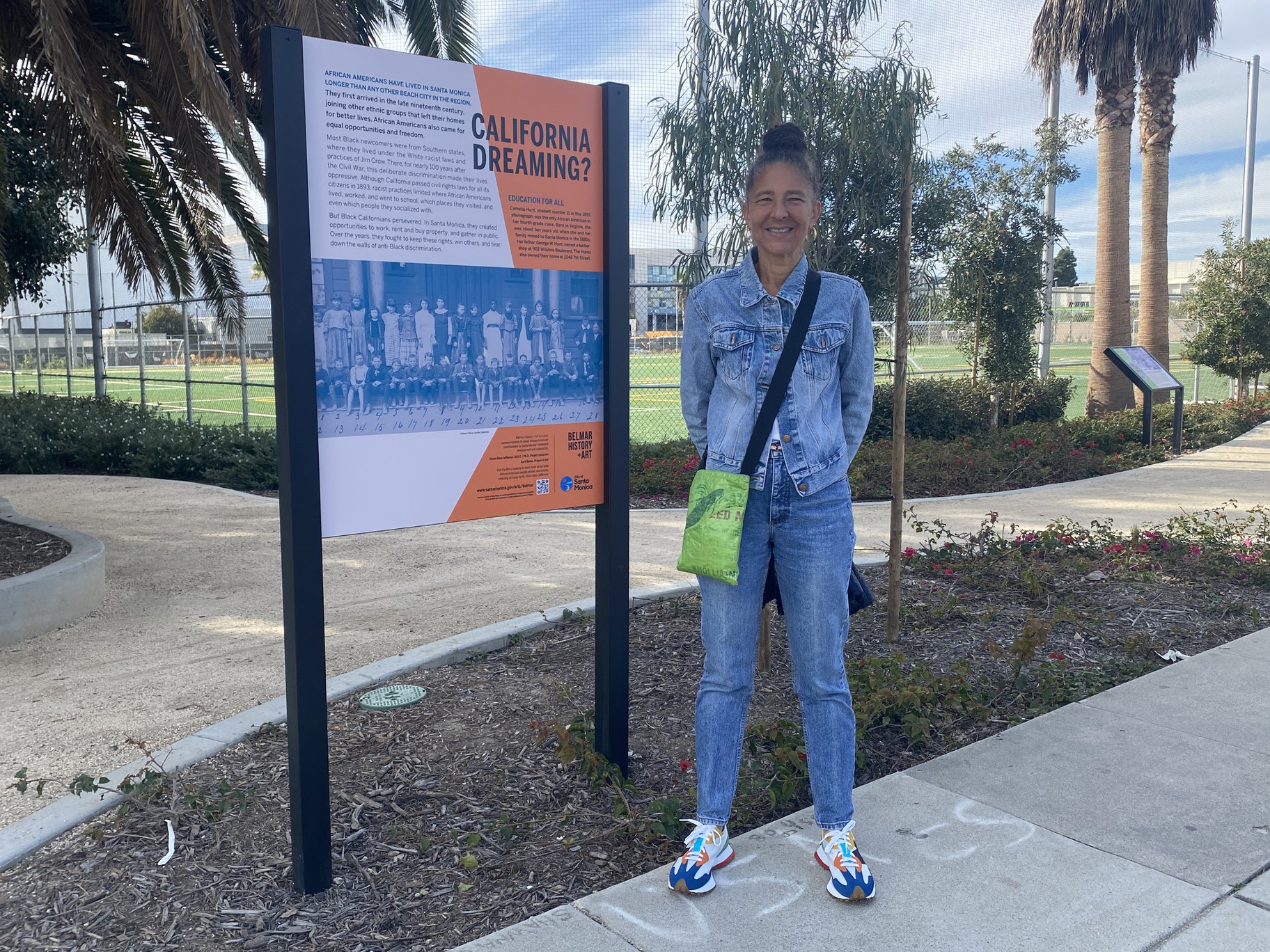 Historian and author Alison Rose Jefferson stands in Santa Monica’s Historic Belmar Park beside one of the interpretive panels she designed to commemorate the neighborhood’s erased Black history. Photo by Aaron Schrank.

Most of the Black families who had lived here had few options when they were displaced, Jefferson says.

“The folks that were homeowners that were displaced, many of them were unable to purchase property in Santa Monica,” Jefferson says. “It was discrimination from the white realtors and from the people who lived in neighborhoods, so many of those folks, they moved.”

“And I am thrilled at the idea that within the next few years, we're going to see some families who were forced out of our town welcomed back,” says Kevin McKeown, former mayor Santa Monica. McKeown first proposed the city’s housing pilot for displaced households.

The pilot moves these displaced households to the front of a long line for Santa Monica’s below-market housing program. That program matches people, based on their income, with vacancies in properties that have deed restrictions requiring them to charge affordable rates.

McKeown says it’s a small step towards justice, but hopefully one of many.

“As much as this is an act of restorative justice, it's nowhere near enough to make up for what has happened in our country for centuries,” says McKeown. “This is a good first step, but I hope nobody thinks this is the end of what we need to do in Santa Monica or in the country.”

Local governments have been under more pressure to reckon with historical injustice since the murder of George Floyd in 2020 and the Black Lives Matter protests that followed. In nearby Manhattan Beach, the state recently agreed to return a parcel of land known as Bruce’s Beach to the descendants of the Black family they stole it from a century before.

The program in Santa Monica isn’t offering to return any lost property. It’s simply offering a shot at an affordable apartment.

Nichelle Monroe, whose grandparents' home was taken, has applied, but she says the program won’t make up for what she lost.

“We're supposed to be grateful that we might get on a list to overpay for rent?” says Monroe. “Rent –– for properties stolen. ‘We stole your property, we gave you two cents for it. Here, just rent this property. Give away your money, your hard-earned money.’ What is that? What am I supposed to make of that?”

Jeremy Divinity’s great-grandfather lost his Pico neighborhood home to the freeway construction in 1959 and moved away to Pacoima. Divinity says the housing pilot sounds good, but he agrees with Monroe. It doesn’t actually restore any of what was stolen from his family.

Divinity says one of his family members filled out an application for the program only to find out that they earned too much income to qualify.

The city isn’t sure how many eligible people are out there, but they’re only promising to help 100. Displaced residents of the Pico neighborhood or Belmar Triangle area have until February 22 to apply. Applicants are tasked with tracking down deeds or other documents to prove their displacement, which can be a challenge.

If more than 100 historically displaced households sign up, they’ll all be entered into a lottery system, and some applicants will get nothing.

“It encapsulates Santa Monica in a nutshell, right?” says Divinity. “Where it's this liberal bastion of hope and ideals and diversity but … it's a show of face, in a sense. It's very performative. It doesn't get to the real issue of the displacement.”

Nichelle Monroe says if leaders in Santa Monica, or anywhere in the country want to get real about reparations, they should start by asking themselves a question.