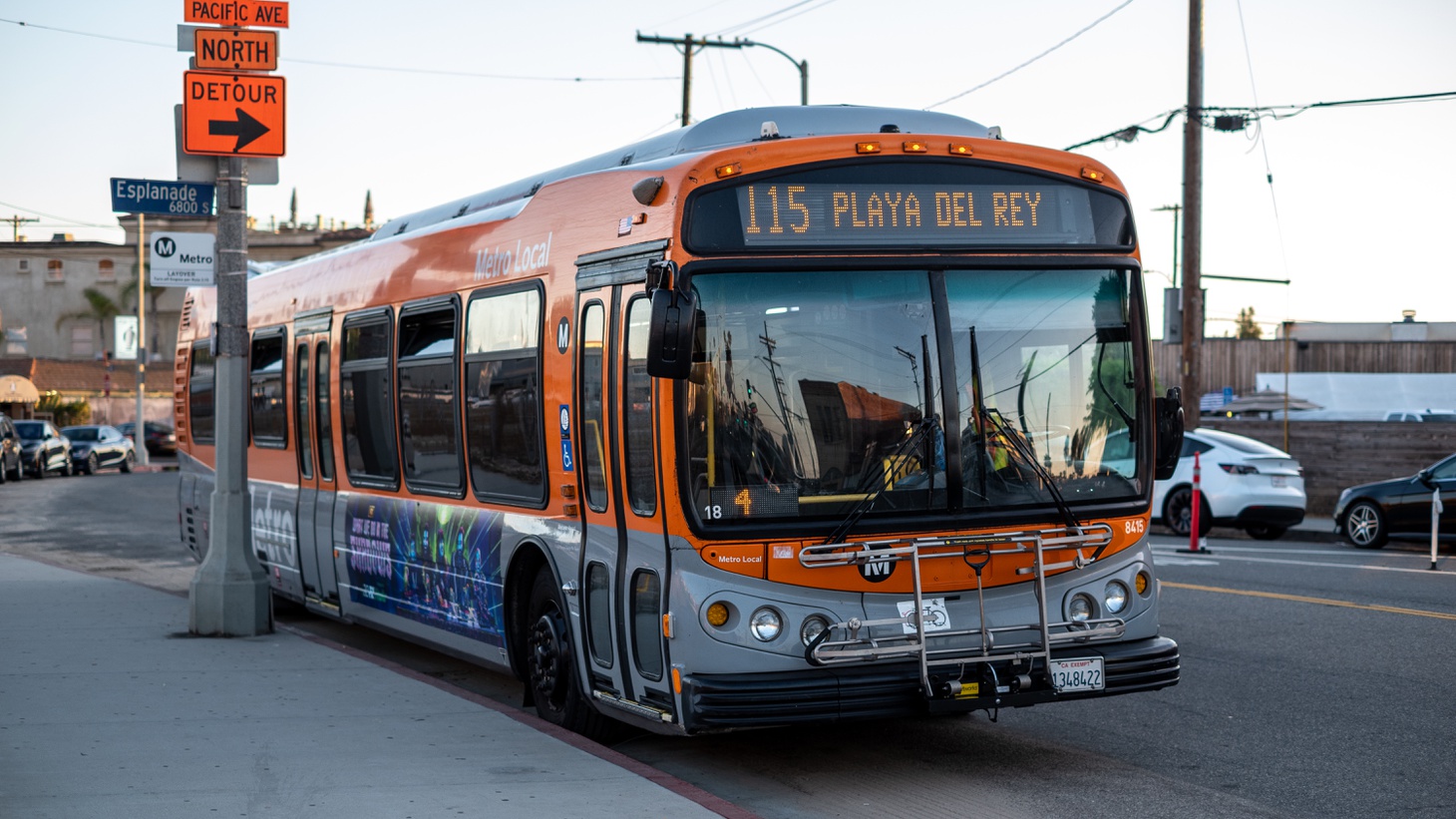 A Metro bus is parked in Playa Del Rey. The agency is expanding its rail and bus services to provide alternatives to personal vehicle usage in Southern California. Photo by Amy Ta.

Los Angeles is a car town, but could it also be a safe place to bike and walk, where fewer car crashes and chases happen? Healthy Streets LA is a ballot measure that the LA City Council is considering, and it would force the city to implement its Mobility Plan 2035, which passed in 2015, whenever it works on a street. For example, if the city had plans to repave Sepulveda Boulevard and no bike lane existed there before, once they start repaving it, they’d have to install that bike lane.

In the past seven years, LA has fulfilled only 3% of its Mobility Plan 2035, says Michael Schneider, founder of Streets for All. “If you do the math, it'll take them 200 years to implement their 20-year plan.”

Some are concerned, however, that congestion would increase if the city adds more lanes specifically for bikes and buses.

“There are trade-offs when it comes to changing the built environment. Everyone's thoroughfare is somebody else's neighborhood. That's the nature of Los Angeles,” says Juan Matute, deputy director at the UCLA Institute of Transportation Studies.

He adds, “We'll have to make choices about whether or not we want to keep traffic fast through certain people's neighborhoods, which tend to be more multi-family housing, in order to accommodate higher traffic flow.”

The City Council could immediately adopt Healthy Streets LA, or vote on it this Wednesday, or put it on the ballot this November (or later).

This month, LA Metro released a report saying it’s uniquely positioned to help reduce climate emissions by getting people out of their personal vehicles and onto a bus or train.

With the new K Line scheduled to open this fall, Crenshaw and Inglewood communities will have rail services they’ve gone without for decades, says Heather Repenning, Metro's executive officer of sustainability policy. She adds that by opening others, such as the Regional Connector (this fall) and D Line (2024), there will be more access as well.

“Our plans to expand and improve our bus and rail service are based on ridership numbers [and] currently ridership projections, but they're also based on a ton of community feedback. We take the feedback from our stakeholders, from our riders, very seriously,” Repenning says.

However, Schneider points out that LA Metro has plans to add 363 new highway miles. “When you add new highway miles, more cars drive on them, and you increase greenhouse gas emissions. … The amount of greenhouse gas emissions is three times the amount of the reduction. In other words, we're going to spend tens of billions of dollars to make climate change and traffic worse.”

Repenning says Metro has evolved its approach to freeways. “Voters have approved funding … through Measure M and through Measure R that dedicates funding for road and highway projects. Now, how those projects are actually going to be built is something that is evolving, partly in relation to … climate change … [and] environmental justice.”

Can LA learn from Tokyo?

Schneider points out that Tokyo, Japan, is similar in size to LA, but they’ve spent money mostly on trains.

“There's a fantastic subway that goes almost everywhere. There's regional trains, there's bullet trains. And so they still have highways, but the primary mode … is to take a train. We have done the opposite in this country and in Los Angeles, where we have spent the majority of our money on highways, and our trains basically look the same as they did in 1950.”

The late Kaari Upson’s drawings, looping videos, and castings of household items are on view at the Sprüth Magers Gallery. Her work always dealt with struggle and trauma.