When UC Riverside comes alive with students and faculty for the fall term, all of them will have to be fully vaccinated. University of California and Cal State schools require everyone on campus to be immunized against COVID-19. But at community colleges, state officials have let local leaders decide whether to implement mandates. Photo by Matt Guilhem / KCRW.

It’s the first day of Nathanael Gayheart’s college career, and he’s doing something that, in our current moment, could be considered a little wild: eating a pack lunch inside, unmasked. He’s sitting in an airy common room at Crafton Hills College in Yucaipa where snacking is permitted, but the rule here is masks must be on at all times when indoors.

“I do think the professors are doing well enforcing and implementing the rules,” Gayheart says. “Students that weren’t wearing masks, he asked them to wear them.” 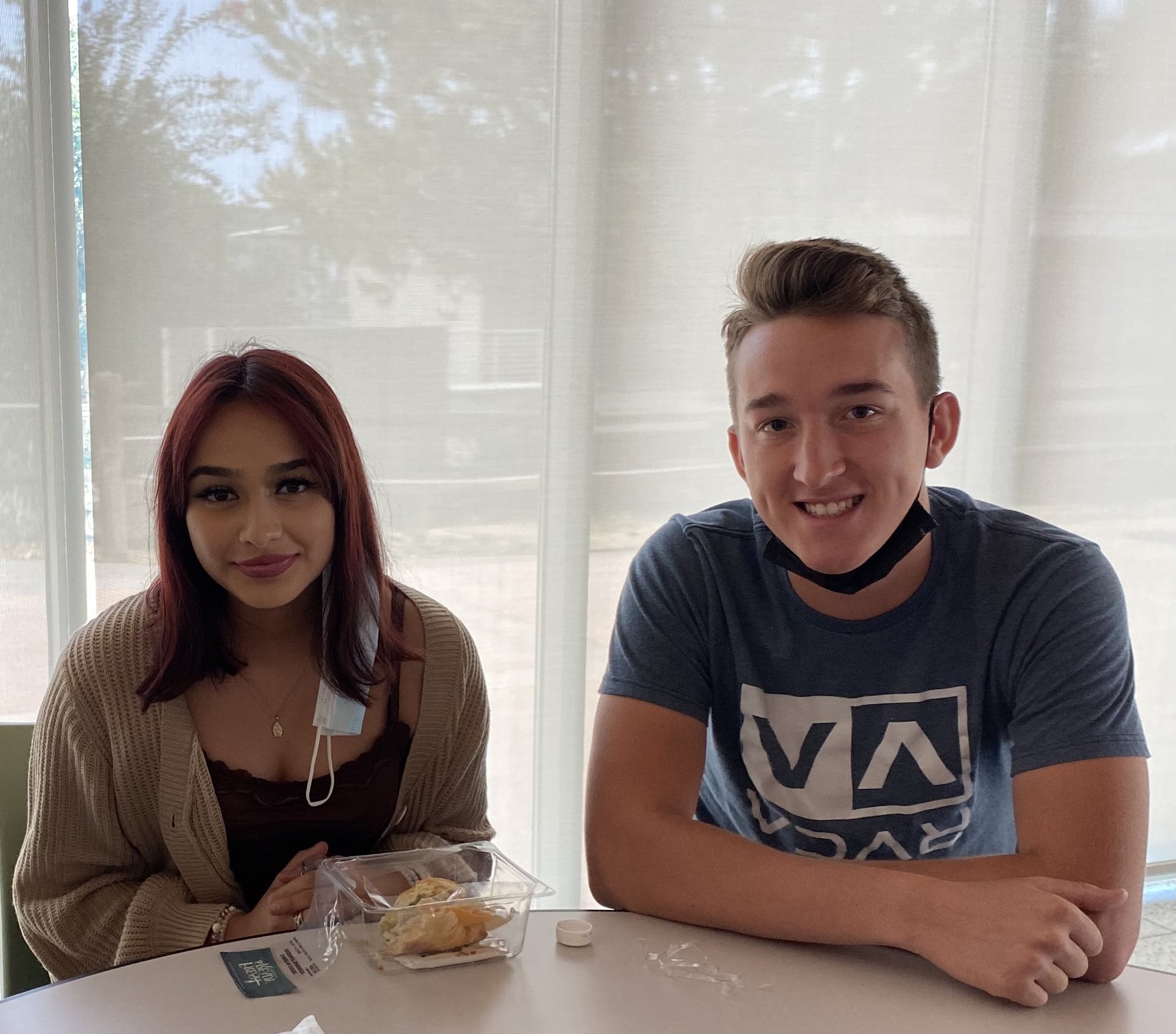 Olga Lopez and Nathanael Gayheart lower their masks while taking a lunch break on their first day of college at Crafton Hills in the Inland Empire. Lopez says getting vaccinated is a personal choice: “For me, I think that the best way that I can stay safe and healthy is to take the vaccine.” Photo by Matt Guilhem / KCRW.

The community college is going all-in on masks, hand sanitizer, disinfecting wipes, you name it. However, there’s one tool missing from the arsenal: a vaccine mandate.

Not so at UC campuses and Cal State schools. At those universities, COVID immunization is a must this year.

In the coming weeks, these two different models will be put to the test as higher ed in Southern California fully restarts.

It’s pretty quiet at Crafton Hills on the first day of school, but that’s by design. Just 43% of fall classes are being offered in-person.

“Thank God we’re back to this again,” says math professor Jodi Hanley, who’s unmasked and outside during a quick break from teaching. Waves of excited educator energy are emanating from her. “I couldn’t imagine going back to remote, even though it’s always a possibility this semester, but it is just so good to be back in the classroom.”

Fully vaccinated against the virus, Hanley feels safe holding her course in a packed classroom even though there’s no guarantee her students are vaccinated.

That’s because in California, community college districts set the policies for individual community colleges. In the case of Crafton, it’s up to the San Bernardino Community College District, and so far, they’re not requiring shots.

Still, Hanley and a lot of students feel secure with the strict masking rules and extra cleanings. 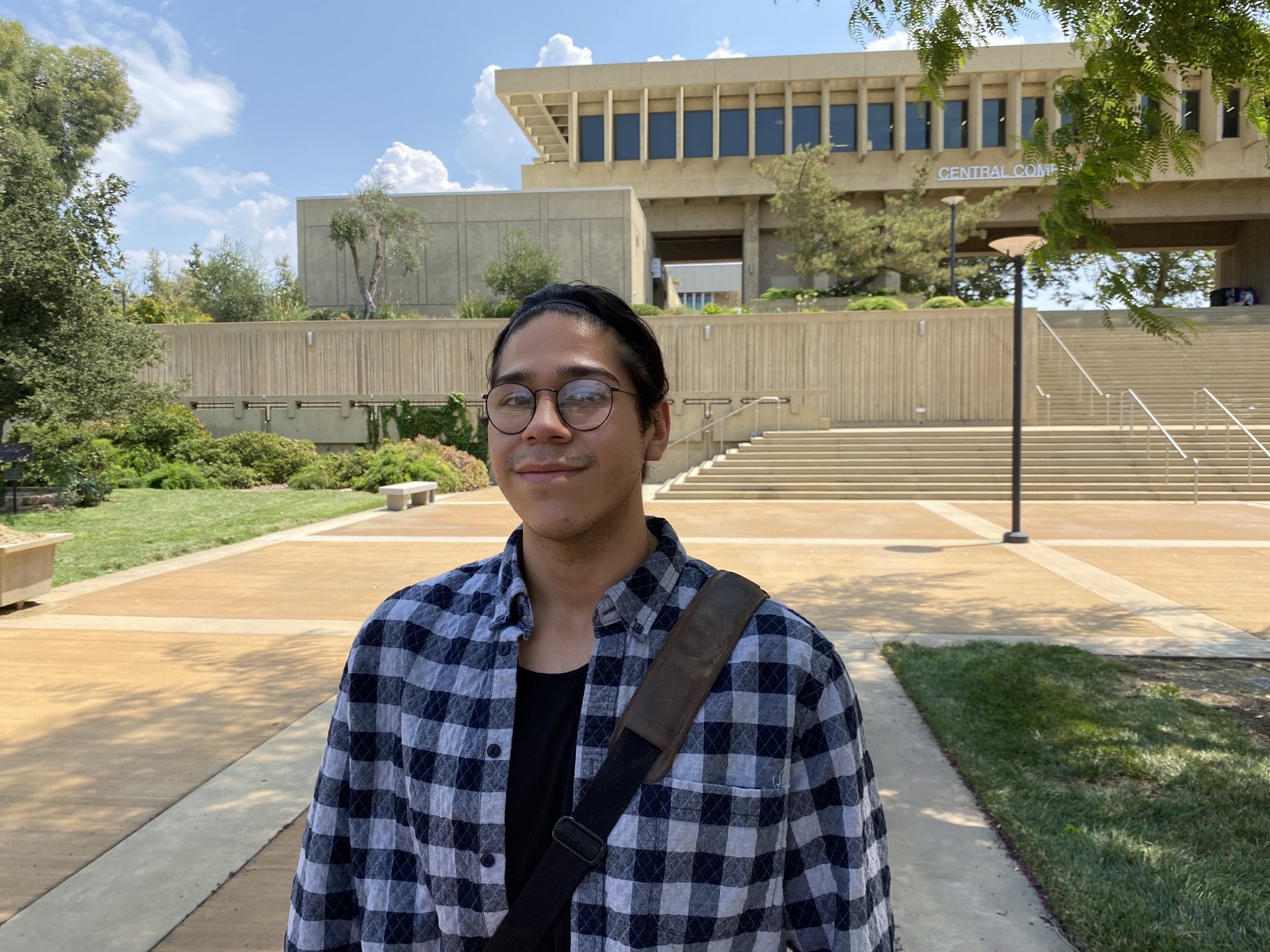 Student Ben Zambrano says a possible COVID outbreak on the Crafton campus is something he thinks about, but it’s not enough to dissuade him from returning to live instruction. “I really value my education, and being able to get back on campus and really feel like I’m taking control of it again, that helps a little bit,” Zambrano says. Photo by Matt Guilhem / KCRW.

“I woke up this morning a little bit late for class,” film and photography student Ben Zambrano says with a laugh. “I was a little anxious coming back, for sure, just being able to see people. But in-person is way better in my personal opinion.”

Zambrano specifically signed up for classes that would get him back on campus this fall after doing summer courses remotely.

“You build that relationship with a professor that you can’t really build online or over a computer screen, and I really like that way better,” he says.

Sitting in the shade, waiting for a class to begin is Nicole Ayoub. This is her third year at the hilltop school, and she’s happy to be back after a long, pandemic-induced absence.

“Feels great, to be honest with you,” Ayoub says. “I like seeing people, I like being with students and interacting and getting my degree done.”

The 20-year-old pursuing a degree in radiologic technology concedes her happiness is tinged with a little unease.

“It’s a bit scary,” says Ayoub. “I want people to be safe, but you can’t really sit home your entire life. You have to get out one way or another, so it’s good to wear a mask, but not everyone’s going to wear a mask. I’m kind of scared about that.”

Both Ayoub and Zambrano are vaccinated, and they’re okay with leaving the decision to get immunized up to the individual.

It’s a different story for Kaliss Gibson. The 21-year-old psychology student would prefer a stricter policy. 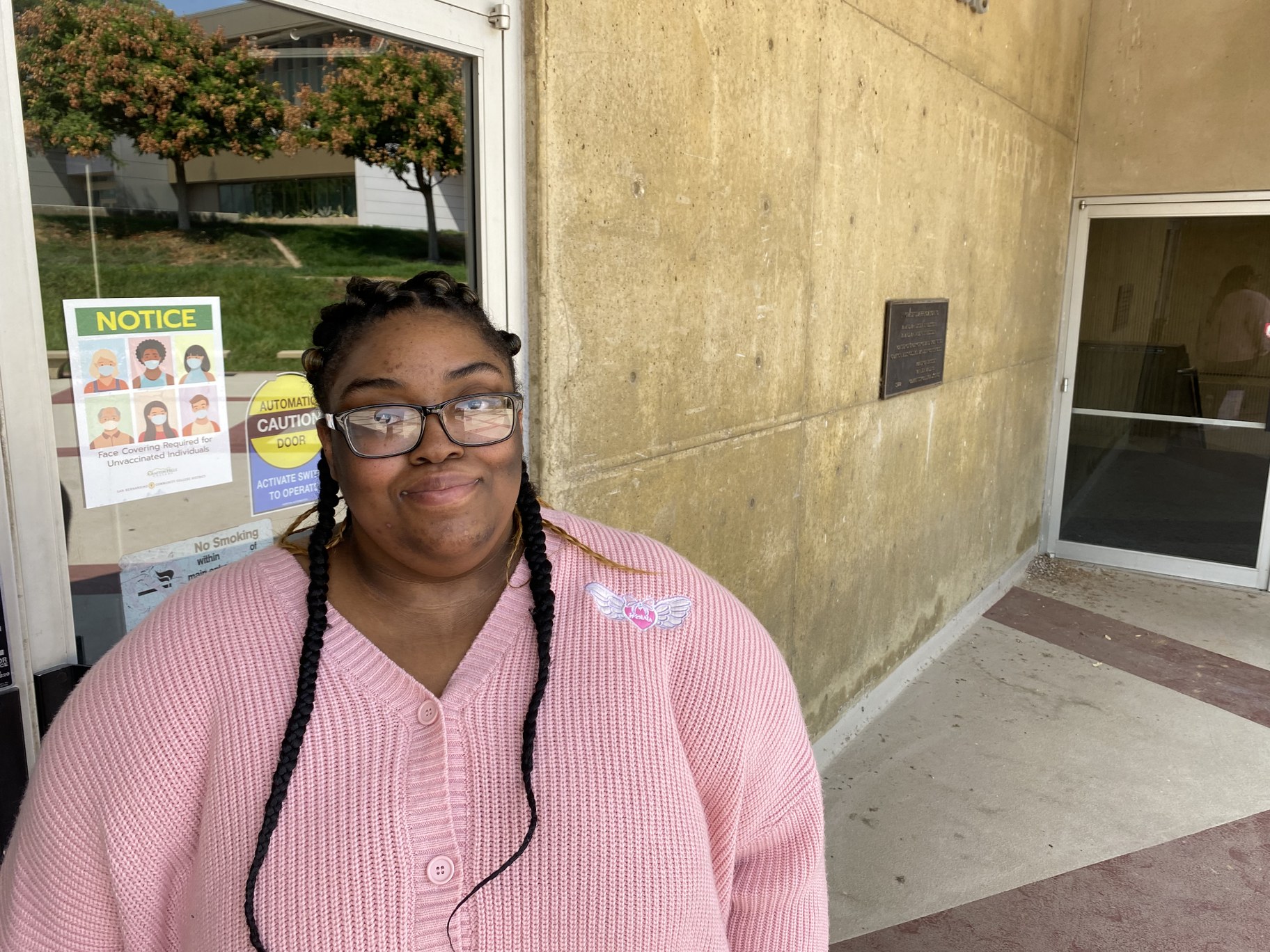 As she navigates her first day on campus, Kaliss Gibson says the whole in-person thing was a little overwhelming at first. After the initial jitters passed, she says it’s much better to actually see real people instead of boxes on a screen. Photo by Matt Guilhem / KCRW.

“I really, really hope in the future they change it to everyone gets vaccinated so there’s less worry,” Gibson says. “But if people want the choice not to be vaccinated, that’s up to them.”

At the University of California, Riverside, classes start September 23. And here, masks and disinfectants aren’t enough. This UC campus required all students and staff to provide proof of vaccination by August 16.

Those who failed to do that will start down a track of consequences, including being denied access to on-campus housing or having class registrations cancelled.

“What the end of that process looks like is still being worked out,” says UC Riverside spokesman Johnny Cruz.

Like Crafton, UCR will have fewer in-person offerings than in the pre-COVID era. About 80% of courses will be on campus this fall, with the largest lectures and big introductory classes staying online. 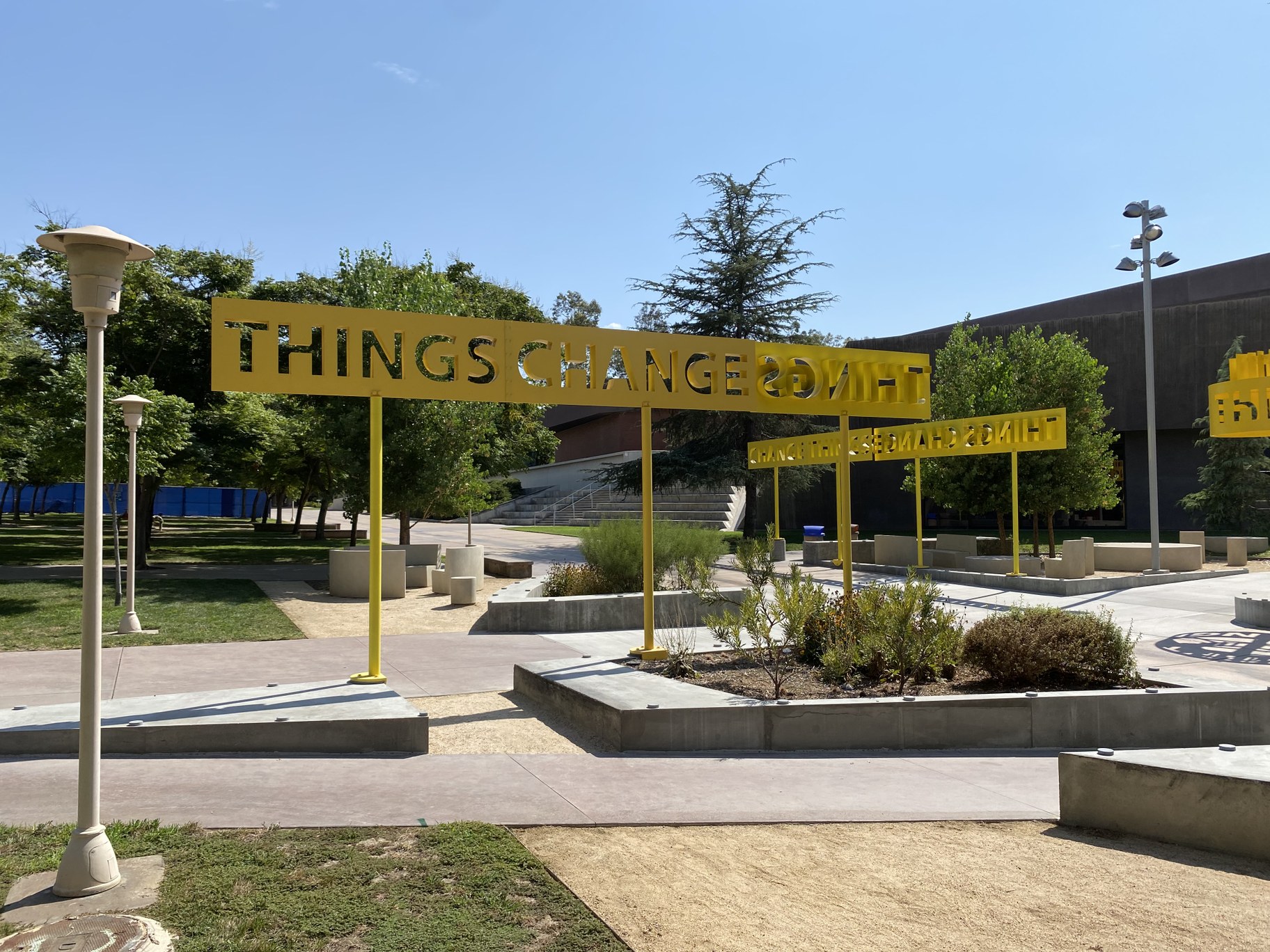 An installation near the UCR Arts building spells out the mantra of the pandemic: “things change.” Photo by Matt Guilhem / KCRW.

The school has invested more than $17 million in infrastructure and supplies to battle the virus, including setting up an on-campus testing lab that can process thousands of tests per week.

While they tackle the virus as best they can with the vaccine mandate and a universal masking policy, Cruz says they’re up against a completely separate pandemic problem: a slew of college students who have never been to college.

“More than half of the students – we’re now a year and a half into this – haven’t actually spent any time on campus,” says Cruz. “In many ways, we have two groups of first year students coming to campus.”

One of those first-timers is sophomore Victoria Nguyen.

“Actually this is the longest I’ve ever spent on campus sitting at this one table,” Nguyen says with a bemused smile.

She’s at a picnic table in the shade at the Highlander Union Building (HUB), in what would usually be the bustling heart of campus. A few weeks out from school starting, it’s basically empty. Still, it’s kind of exciting to Nguyen that this is even a physical place.

“It’s so wonderful to just see that there’s a building with UC Riverside on it,” says Nguyen. 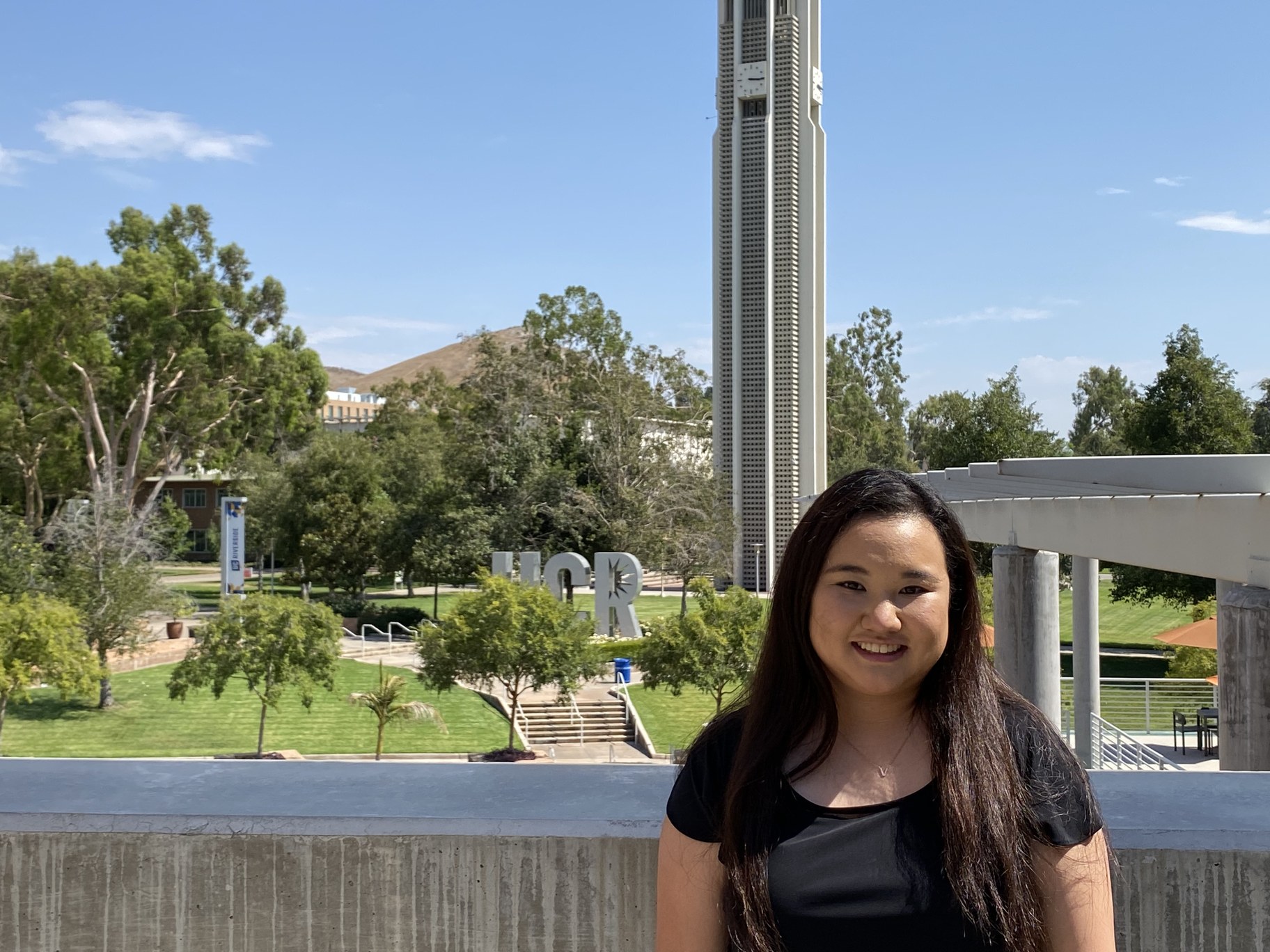 Victoria Nguyen was eager to submit her vaccine status to UCR. She says the process to upload her proof of vaccination was quick and easy. Nguyen was especially excited to complete the process because it was the last bit of paperwork separating her from coming back to campus — one she’s really never been to — this fall. Photo by Matt Guilhem / KCRW.

The incoming sophomore from Irvine is particularly glad UCR is requiring vaccination. She has asthma, which means she’s at an elevated risk of being hospitalized with the virus.

“Having that made me feel a lot more comfortable returning to campus, being in large groups again, being in an indoor situation with other people,” Nguyen says.

“I’m completely onboard with it,” Rasso says. “I think that it’s extremely necessary just in the sense of seeing what has happened over the past year.”

While he can see how some people could take issue with being required to get vaccinated, he’s firmly in the camp of “your freedom ends where my safety begins.”

“The personal freedom to spread a virus that’s killed over 500,000 people is not up for debate when it comes to coming to a campus and being safe in an academic environment,” says Rasso.

Hoping for the best

Back in Yucaipa, at Crafton Hills College, school brass like vice president of administration services Mike Strong are well aware of the risks a return to campus presents.

“There’s a lot of concerns around it,” Strong says. “Everybody’s got the fear of, ‘Hey, we’re going to have a COVID outbreak.’” 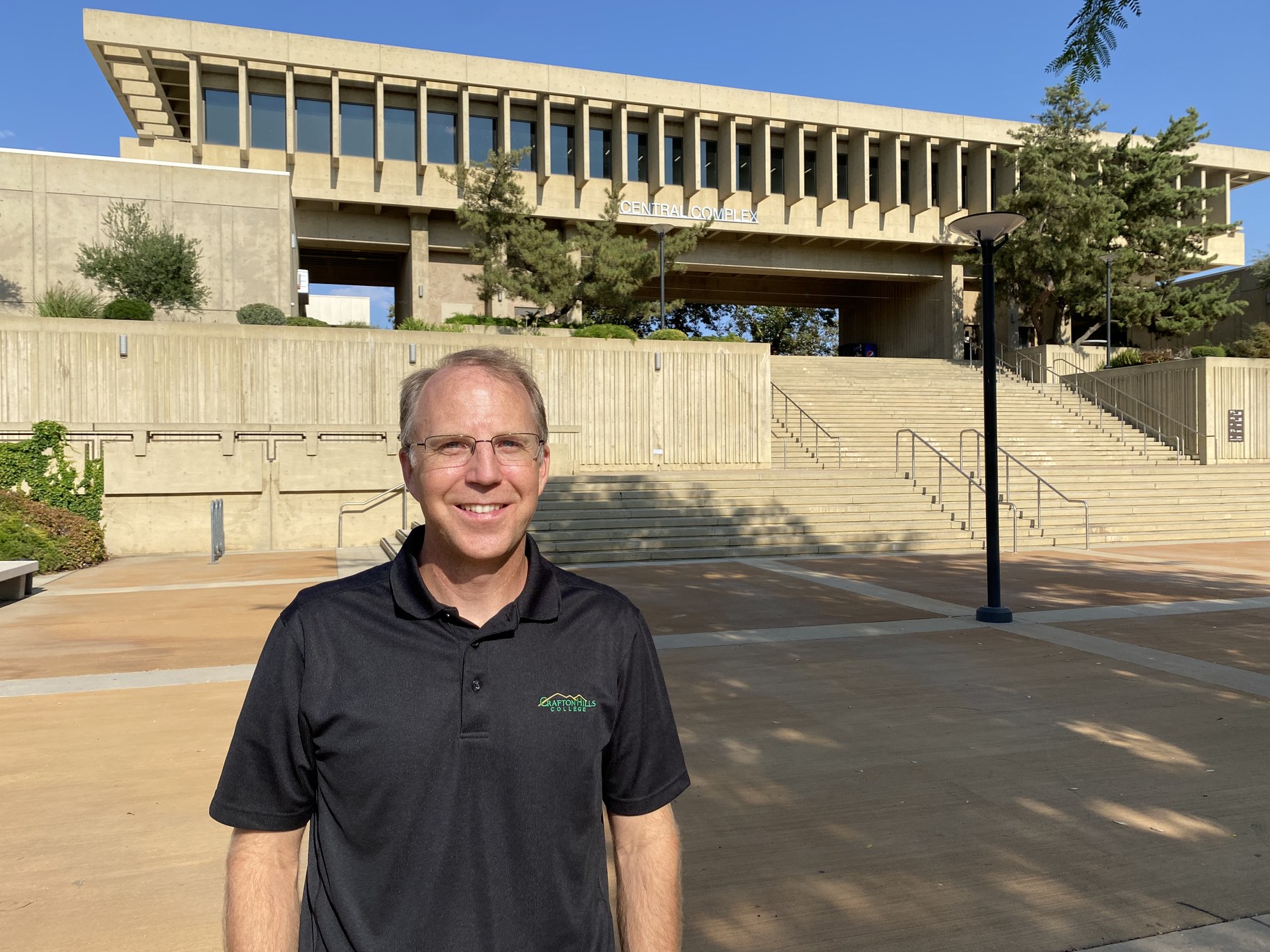 Crafton administrator Mike Strong isn’t shying away from the possibility that a coronavirus outbreak could turn the fall term upside down. “There is some concern by a lot of people,” Strong says. “But we’re following the guidelines that are provided by the Department of Public Health and Cal/OSHA.” Photo by Matt Guilhem / KCRW.

Strong acknowledges that while Crafton doesn’t have the authority to implement its own vaccine mandate, the overarching San Bernardino Community College District could change direction.

If a COVID outbreak hits the school, he says the worst-case scenario is a swift pivot back to remote learning.

For math professor Jodi Hanley, adapting her class — even possibly moving it back online — is a variable she’ll solve for when the time comes. For now, she’s getting a sense of satisfaction and comfort just being physically present on this first day of school.

“I don’t know much longer I would’ve been able to sustain it, being at home, being remote,” says Hanley. “It just feels like, okay, we’re getting back to what we considered normal from before COVID. That’s what I like about this. This feels like it’s the beginning of the end.”

The math teacher buzzes into her crowded, fully-masked classroom and starts her lesson. But Hanley and her students won’t be able to crack the equation facing all of us. If the Greek alphabet has 24 letters, and Delta is the fourth, how many more will we have to go through before getting back to actual normal?

UC schools and Cal State campuses have established firm rules regarding vaccines. Students and faculty must submit proof of vaccination to have access to any and all...

Rabia Ahmadi came from Afghanistan in 2016 and now serves as the family services director at Miry’s List. She says, “We are safe here, we appreciate that. But our families...

“In my highs and my lows, in times where I've been in love and times where I had my heart broken, bolero has always been there,” says Roberto Carlos, founder of “Boleros de...