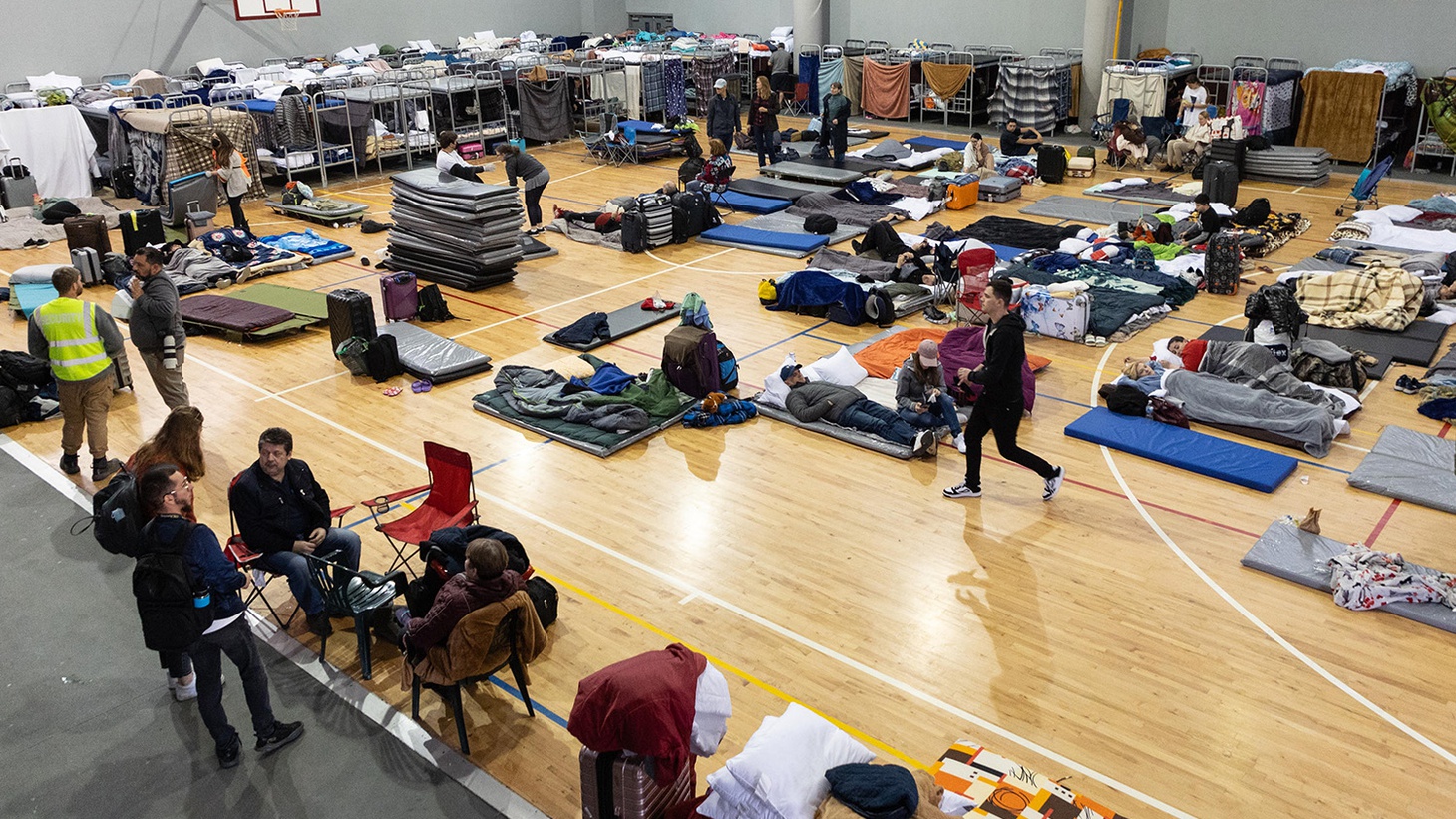 The Benito Juárez sports complex is lined with dozens of bunk beds and hundreds of sleeping mats, housing thousands of Ukrainian refugees seeking to reunite with their families in the United States. Photo by Yannick Peterhans.

At Benito Juárez sports complex in Tijuana, more than 15,000 Ukrainian refugees found temporary shelter in tents, on gym mats or in bunk beds, as they waited two or three days to be processed into the U.S.

Interviews with Ukrainian refugees on both sides of the border paint a picture of psychological scars, families torn apart, and arduous journeys to escape war with the hope of one day returning home.

"I always wanted to go to America — it was in my dreams — and now that I'm almost there, I don't want to go there, I just want to go home,” said Vika, 16. “Because home is home, you can’t replace it.”

The path to the U.S. through Mexico is closed as of today. Refugees will now need a sponsor —a family member or non-profit organization — and will need to pass rigorous security checks to enter the country directly from Europe. If refugees try to cross through Mexico, they will be denied entry.

Over the past two months, however, the Benito Juarez sports complex’s basketball court has been a scene of improvisation and resourcefulness. Weary parents tried putting their distraught children to sleep on gym mats — or bunk beds with blankets or tarps hanging on them as privacy curtains.

A makeshift infirmary was set up steps away from an abandoned wrestling ring. Volunteer nurses and doctors from UC San Diego and San Diego State University treated patients with burns or high blood pressure. Outside the complex, tents and canopies housed families awaiting their turn with immigration authorities. 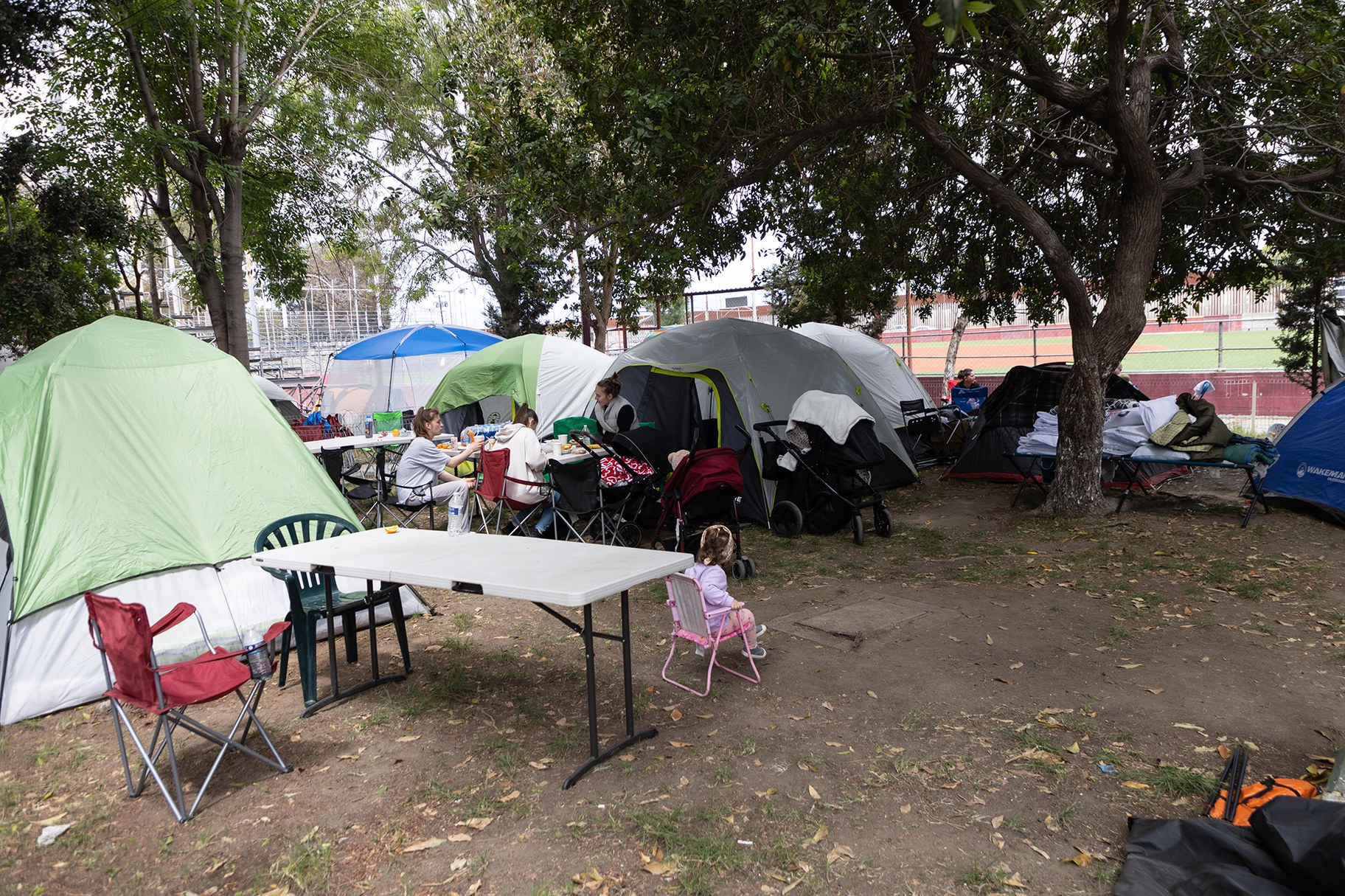 Tents are set up outside the Benito Juarez sports complex in Tijuana to accommodate Ukrainian refugees who do not have a bed inside the gymnasium. Photo by Yannick Peterhans.

Vika and her mother, Anna, arrived at the Tijuana International Airport on April 11 dressed in heavy winter coats. In an interview conducted in Russian, they explained they had spent the first two weeks of the war sheltering in the basement of their dacha — a countryside second home common in former Soviet countries — in the suburbs of Kyiv.

Like others interviewed for this story, they requested that their last names not be used because of fears for the safety of their families in Ukraine and concerns over their immigration cases.

“My nervous system could barely handle it,” Anna said. “It was difficult psychologically. Every three hours, you hear[d] the sirens.” 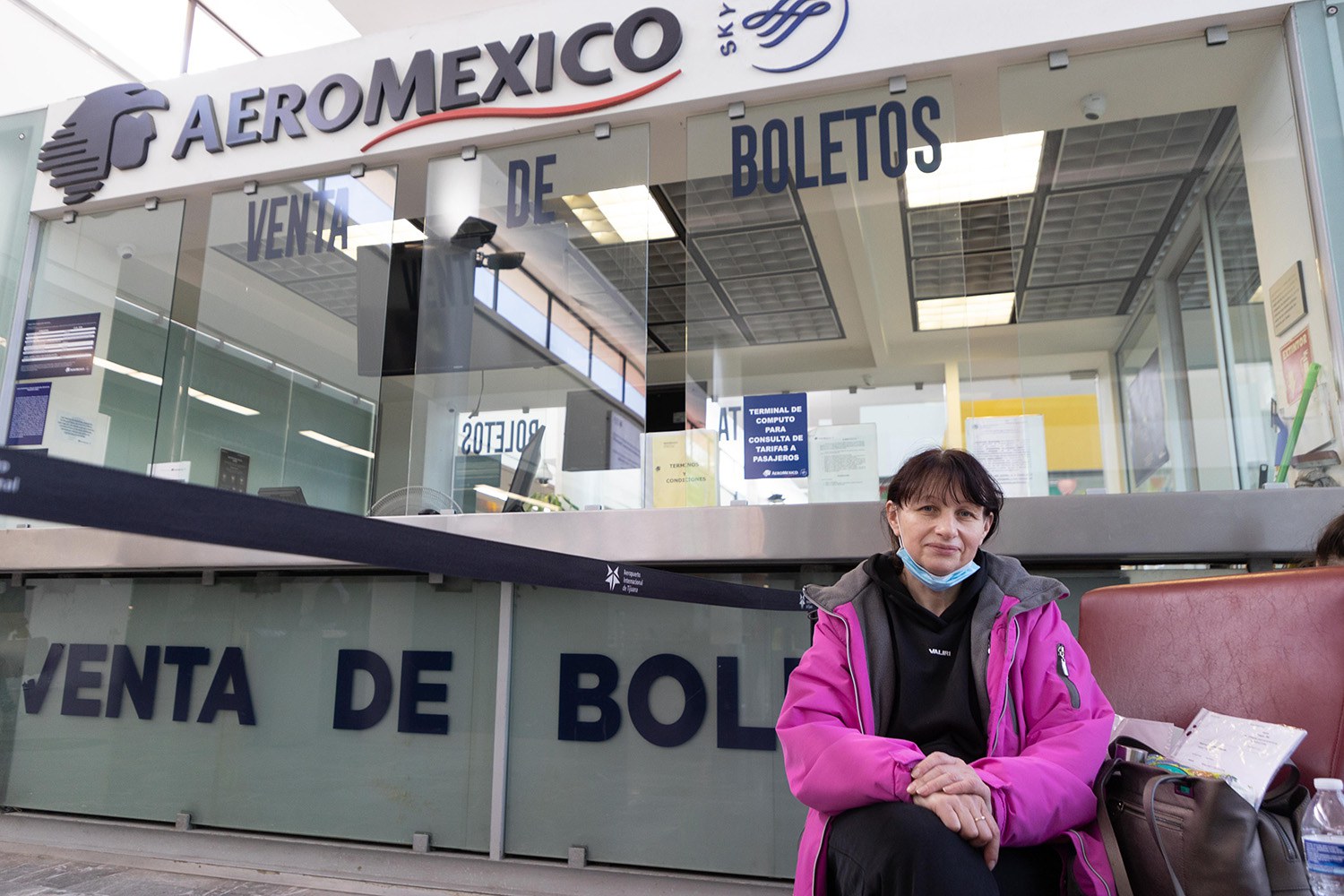 Just after arriving from Ukraine, Anna sits in a designated area for refugees in the Tijuana International Airport, waiting to be taken to the Benito Juárez sports complex. She requested her last name not be used because of fear for the safety of her family and concerns about her immigration case. Photo by Yannick Peterhans.

“It was the most long and awful journey,” Vika said.

They left by night train to Kovel, a city in northwestern Ukraine an hour away from the Polish border. All of the train’s lights were off to avoid attracting Russian shells. After a long wait, they crossed into Poland, where they stayed about a month before deciding that traveling to Mexico was the easiest and quickest way to get to the U.S.

The pair plan to reunite with Anna’s older daughter, who has been living in Washington state since 2013.

“My heart hurts that we left everything [in Kyiv] — our house, our friends, our job,” Anna said. “You feel like you’re just going nowhere.”

For 65-year-old Olga, also temporarily staying at Benito Juárez, the fear of the journey weighed less heavily on her mind than what she left behind.

When Russia invaded Ukraine, she took shelter in her church’s basement for six days. Olga lived through the war for a month until a conversation with her kids about going to Mexico changed her mind.

“I am old, and was nervous, and crying and everything,” she said. “How can I leave Kyiv? But thank God. God gave me strength”

Olga left behind her second son, who stayed to continue working at a TV station. “Of course my heart is over there,” she said.

The improvised assistance for refugees continued on the U.S. side of the border, where volunteers from churches and nonprofit groups assembled a makeshift camp to provide food, internet, assistance, and transportation.

“The situation has escalated, a war has happened,” said Andrey Vox, a volunteer driver at the San Ysidro border crossing. “We’ll help in any way we can.”

Vox is Russian and has Ukrainian coworkers at his moving company in Trabuco Canyon in Orange County. On a day off, he drove to the border to lend a helping hand from 7 a.m. to 7 p.m., shuttling Ukrainians to airports, train stations, hotels, and churches.

“We're just driven by desire and just to give people an assurance that they are home, they are safe, the stress is over,” said Olga Martinez, another volunteer at San Ysidro.

Martinez has lived in Orange County for 25 years but her mother is in Ukraine. She said is “fully dedicated” to helping Ukrainian refugees. 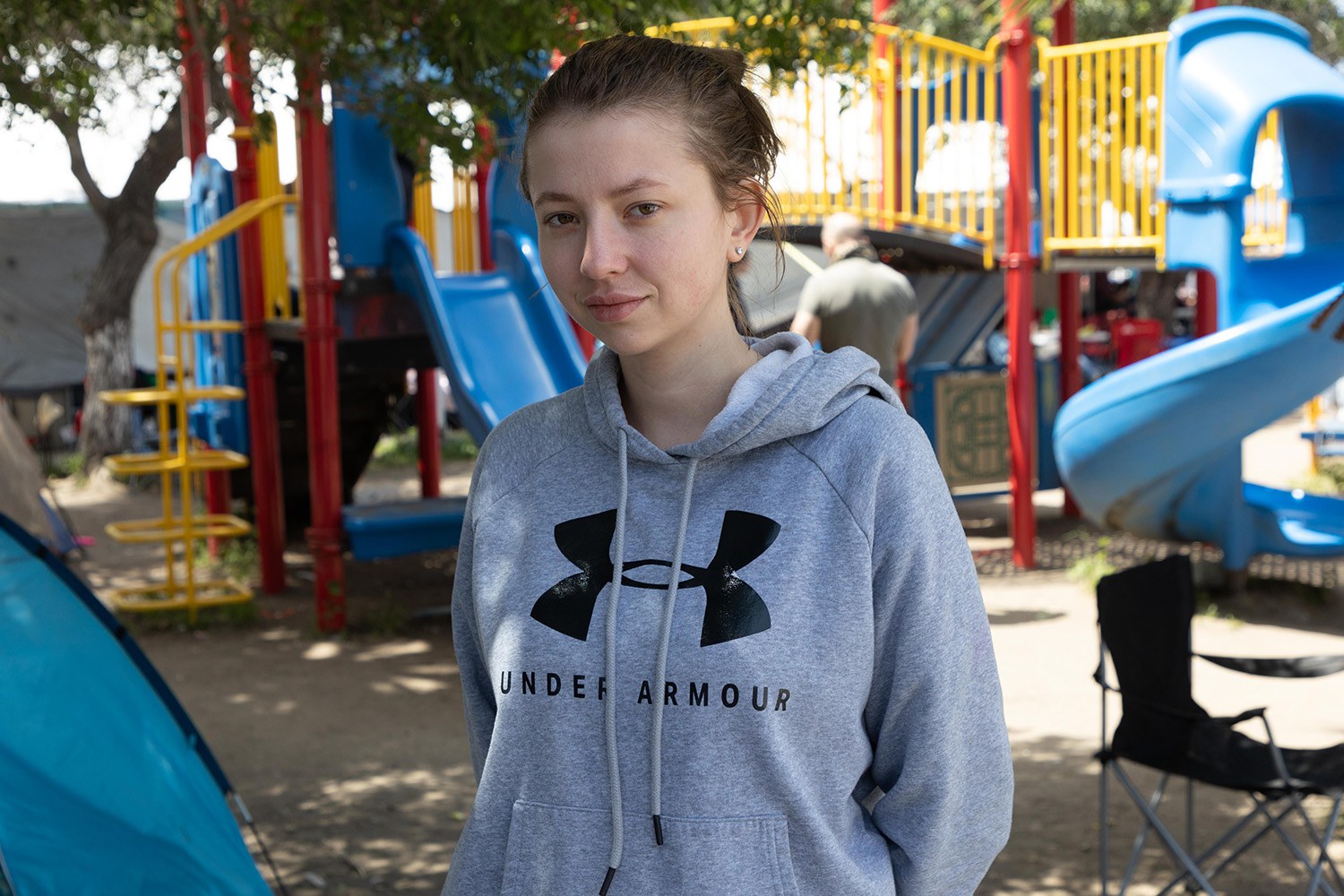 Nastya Lukaschchuk, 25, stands in front of the playground outside the Benito Juárez gymnasium. She is a makeup artist who left her hometown of Kharkiv when the bombing started. Lukaschchuk has since settled in Cleveland, Ohio. Photo by Yannick Peterhans.

Crossing into the U.S. can be a relief, but can also lead to more questions for the refugees.

Nastya Lukaschchuk, a 25-year-old make-up artist from Kharkiv, was among the very first refugees to arrive, leaving Ukraine the day the invasion started after a friend in the U.S. warned that war was imminent.

After a month alone in Poland and a pit-stop at Benito Juárez in Tijuana, Lukaschchuk crossed into the U.S. and flew to Cleveland, Ohio to live with her great-uncle.

“I finally feel safe,” Lukaschchuk said. “I’m slowly getting used to America. For now, I like everything, but I think I still don’t fully understand that I’m here or that I’m almost 10,000 kilometers away from my home.”

Like many others, she is focused on going back to Ukraine.

“I would love to return,” Anna said. “Most importantly, to have somewhere to return to.”