Some unemployment funds — plus an extra $300 per week from the federal government — will run out on September 4 for tens of thousands of Angelenos. “For me, it means that I have to think outside the box at this point. And so I have to pivot, you know, something that I didn't want to have to do or anticipate having to do when my business has been very successful. But when you have a family to support, sometimes you just don't have a choice,” says one LA resident. Photo by Shutterstock.

Nick Caprino spent most of the pandemic making music in his Van Nuys apartment. The bar where he worked had shut down because of COVID — then just plain closed for good. Over the past year, like many of us, Caprino thought about what really mattered to him. Dreams of a music career had brought him to LA in the first place. Now he was getting unemployment benefits, plus an extra $300 a week from the federal government in pandemic-related relief. Caprino found he actually had some time to think and create.

“For the first time in my life, I got to hit pause on everything and sit down,” he says. 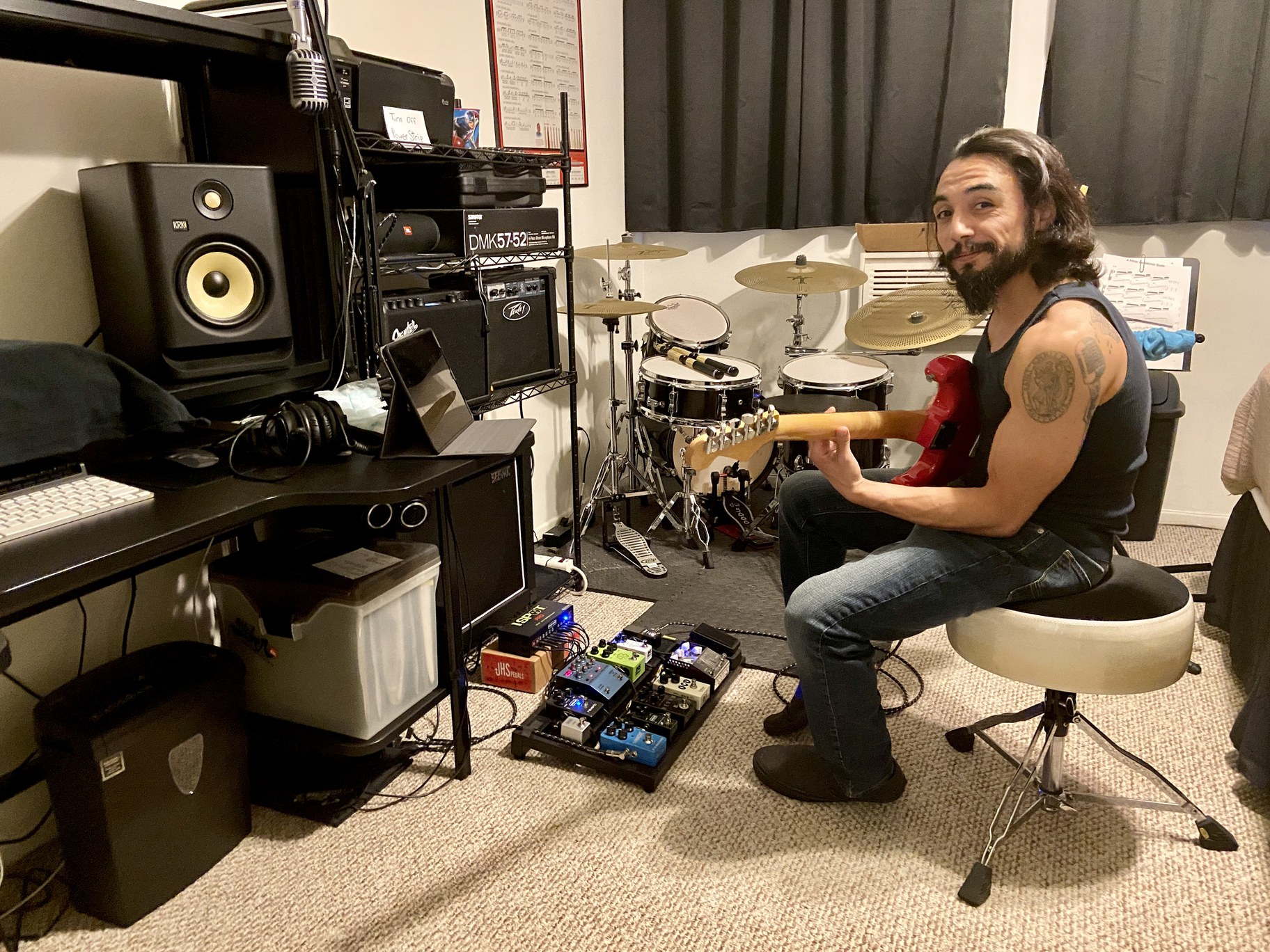 Nick Caprino plays guitar in his home studio. He spent much of the pandemic writing and recording music here. Photo by Giuliana Mayo.

Now the time to reflect — afforded by that unemployment money — is about to run out. On September 4, Caprino and more than 40,000 other Angelenos currently receiving benefits will lose the $300 extra per week they’ve had throughout the pandemic. Plus, any gig workers who were covered because of the COVID-19 emergency will be out in the cold too. What is life going to look like for them… and for our economy?

There are countless ways for 40,000 individuals to spend the federal money. One path: Use it to pay for education –– an investment with an eye on a new career. That’s the case with Mike, who was a server at a high-end restaurant when the pandemic hit. (KCRW is only using his first name because he fears losing his unemployment benefits if he’s identified). Mike earned less on unemployment than he had when working, but he figured out how to get by and went back to school for Ayurvedic medicine.

“I see it as kind of like a mini GI Bill,” he explains. “For me, it was a great opportunity and a very rare opportunity to invest in education and invest in my future.”

Now that his extra federal benefits are ending, Mike plans to find a way to stay in school. One path he’s not considering? Another job in a restaurant.

“No, not a chance,” Mike states emphatically. “Everything that happened in 2020 gave me a hard exit. And it was something that I was determined to use to my advantage.”

There are plenty of news stories about how hard it is for employers to find people to fill open positions. But even as extra benefits end, Mike and others have told KCRW they’re not interested in service industry jobs. Public-facing jobs carry the risk of catching COVID-19. Those workers were the first and hardest hit when the pandemic began. Given that risk, many are hoping to pivot rather than sink back into subsistence jobs.

Then there’s the issue of pay. Caprino is back behind the bar now, but he had to field job offers for $25,000 less than what he earned pre-pandemic.

Without a cushion from unemployment benefits, some workers might take whatever job is available. But for others, the pandemic isn’t over.

Emily is an event planner from Reseda who owns her own company.  (KCRW is only using her first name because she is also concerned about possible repercussions from unemployment). With the Delta variant still  rampant, not too many people are booking events. So what should people like her, who relied on these funds for their livelihoods, do now that they’re running out?

Chris Thornberg, an economist with Beacon Economics, says the overall economy will start getting back to normal when they take whatever job is available.

“People have opportunities,” he says. “‘Oh, I want to be an event planner.’ Well, okay, and I want to be able to fly. But we all have to operate within the certain realistic boundaries of the world around us. And yeah, you may have to go out and find some other job in the meantime, until events come back in a real way and allow you to re-enter that occupation. And there's plenty of opportunities in this economy for you to go out and find another job in the meantime.”

Emily, who has been taking care of her three children full-time since her husband returned to work, says for her and many others like her, it’s not that simple.

“I have to pay someone $20 an hour to watch my toddler, no matter what I do,” she points out. “So no, I can't just take any job. I have to be making at least double that to justify me being outside of the house and having someone here to watch my youngest who's too young for preschool.”

For Emily and the 40,000 other Angelenos who will be affected by the end of extra federal funds, the question of where and how to find a job and whether or not it will pay enough to get by is becoming more and more urgent.

“For me, it means that I have to think outside the box at this point,” Emily says of the end of federal funds. “And so I have to pivot, you know, something that I didn't want to have to do or anticipate having to do when my business has been very successful. But when you have a family to support, sometimes you just don't have a choice.”

40,000 Angelenos will run out of federal unemployment benefits in a few days. How will they get by?

Federal unemployment benefits and supplements are ending on September 4. Where does this leave folks who can’t find a job or are reluctant to return to public-facing...

Vaccine mandates are popping up at companies, universities, and government offices across California. Employees can opt out for medical reasons or “sincerely held religious...

LAFD leaders are trying to get more than 1,000 firefighters vaccinated before the city’s vaccine mandate goes into effect in October.