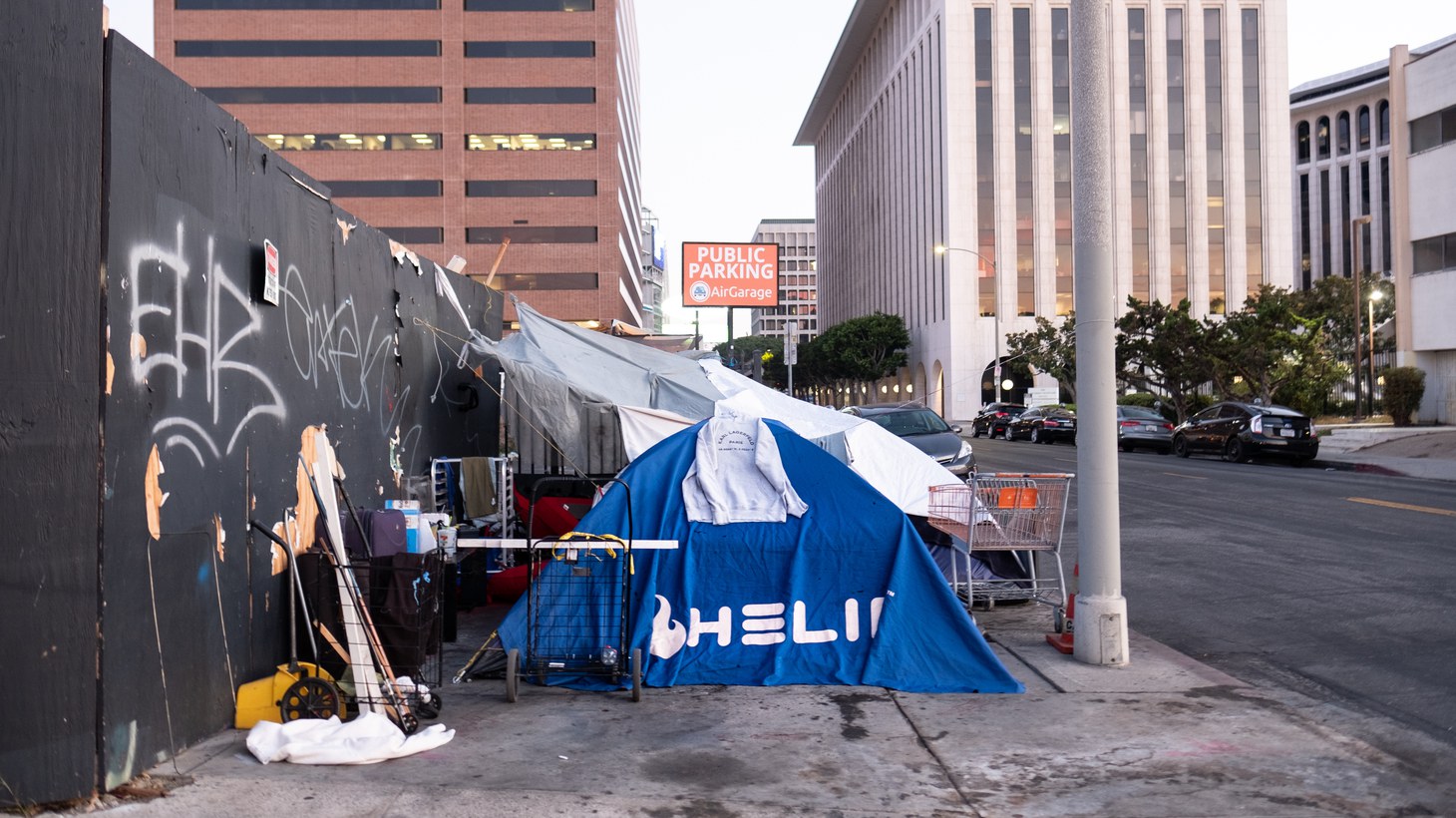 A homeless encampment is seen in Koreatown, September 5, 2021. Eric Garcetti said this summer that “the mayor of LA is not some all-powerful being” when it comes to solving homelessness. Photo by Amy Ta.

With more than 41,000 people estimated to be experiencing homelessness in the City of LA by last count, it’s no surprise that the two mayoral candidates who will face each other in November, Rep. Karen Bass (D-Calif.) and billionaire real estate developer Rick Caruso, talk a lot about their different approaches to solving the crisis.

Bass paints herself as a unifier with strong connections to the Biden administration and other levels of government that she’ll tap for housing resources. During an event last month with U.S. Housing and Urban Development Secretary Marcia Fudge, as well as LA city and county officials, Bass said, “I believe about an hour after I heard about [Fudge’s] nomination I approached her … and said, ‘You must come to Los Angeles as soon as possible. Because in Los Angeles we have an absolute emergency.’”

“An emergency needs everybody on board,” Bass said.

Caruso, a former Republican (he registered as a Democrat earlier this year), paints himself as a get-it-done outsider and speaks more to voters who are simply fed up with street encampments. He promises to barrel through red tape to dramatically expand the city’s shelter system and ban camping on public property. “The minute you have a good, warm, clean bed and food, then people need to move off the streets,” he told ABC7. “No more encampments.”

Yet despite their differences, the key promise Bass and Caruso both make is what a lot of voters want to hear: to move large numbers of people off the sidewalks during their first year in office.

Can they really do that? Outgoing mayor Eric Garcetti says good luck.

“Homelessness isn't going to turn around in a year,” Garcetti told KCRW in a recent interview. “There’s no cavalry. The mayor of Los Angeles is not some all-powerful being.”

That’s not much of a campaign slogan, of course. And it’s not surprising for the outgoing mayor to say he did everything possible to end homelessness on his watch. Still, it begs the question: What can LA’s mayor actually do to solve homelessness?

Bass, a former community activist in South LA-turned-U.S. representative, says she’ll treat homelessness as an emergency and move 15,000 people into housing or shelter during her first year as mayor, largely by pulling in state and federal funds and expanding existing programs. She also promises to end encampments, in part by expanding and streamlining street outreach, which is currently conducted by a patchwork of nonprofits overseen by the Los Angeles Homeless Services Authority. Previous reporting by KCRW has found outreach in the City of LA inconsistent and hampered by a lack of shelter space.

Caruso, meanwhile, says he’ll add 30,000 new shelter beds during his first 300 days, which would roughly triple the city’s current number. He says he’ll use emergency powers to get “City Council politics out of the way” and rely largely on surplus city land to site the shelters. Then, he says, he’ll crack down on unhoused people who turn down offers of shelter by barring street camping.

Some of these promises are similar to efforts already made by Garcetti. In 2018 Garcetti declared a shelter crisis in the city, which helped facilitate 27 new shelters totaling about 2,000 beds under his “A Bridge Home” effort. Nearly 8,000 new affordable apartments are expected as a result of Prop HHH, a voter-backed bond measure (though only a fraction are complete). And Garcetti increased the city’s homelessness budget from $10 million to more than $1 billion this fiscal year, thanks largely to one-time state and federal COVID relief dollars.

Asked about Caruso’s 30,000-bed promise, Garcetti estimated that it could cost upward of $800 million a year. He sounded skeptical that either Caruso or Bass will be able to scrounge up large amounts of additional funding from other layers of government to rapidly move unhoused people indoors.

“The idea that there will ever be federal funds that come in — a FEMA-like response — isn't the way the country is set up,” he said. “There are zero programs for that right now” outside of temporary funding that has helped pay for pandemic-related initiatives like Project Roomkey, which places unhoused people in empty hotel rooms.

Garcetti says that while he hopes the federal government will step up with more assistance in the years to come, “I also hope that we will see candidates who push us with promises that are both bold and achievable.”

Not all powerful but not powerless either

Still, that doesn’t mean there’s nothing else a new mayor could do to deal with the crisis, and plenty of people who work on homelessness in LA say the next mayor can do better than the current one.

For one, Prop HHH has been widely criticized as too slow and costly in its implementation, with only about 1,600 units completed more than five years into the effort. Some advocates and current and former city officials blame Garcetti for lacking the innovation and urgency to get faster, more plentiful results.

“They love to say ‘we have units in the pipeline,’” said Pete White, executive director of the Skid Row-based Los Angeles Community Action Network. “This is a great Garcetti line. But what most Angelenos don't know is: Just because you hear the words ‘units in the pipeline’ does not mean that there is a unit spoken for or a unit that's going to be built.”

Additionally, the next mayor could be more aggressive about things like rent relief, maintaining affordable housing or buying existing buildings to convert to housing, says Heidi Marston, who recently quit as head of the Los Angeles Homeless Services Authority.

Marston also says there’s too much mission creep between the city and LA County, which controls social services and shares responsibility for handling the homelessness crisis.

Garcetti’s also been criticized for leaving homelessness policy too much in the hands of LA’s 15 City Council members, who basically have 15 different approaches to dealing with the crisis.

“I think that the mayor has a lot of deference to the City Council,” said Tommy Newman, vice president of engagement and activation at the United Way of Greater Los Angeles. “I’ve heard both [Caruso and Bass] talk about the need for the mayor to push and do more.”

“The underlying drivers of homelessness are the lack of deeply affordable housing, income inequality, and structural racism,” said Dr. Margot Kushel, a physician and professor of medicine who directs the Benioff Homelessness and Housing Initiative, a research center at UC San Francisco. “It’s going to be hard to solve this problem without effort from the federal government.”

Meanwhile, LA’s unhoused don’t have time to wait for elected officials to sort out income inequality or structural racism before they have a safe place to sleep and a decent meal.

A couple of months ago, standing outside the tent she lives in in Koreatown, Maria Dimitriou said after she lost her job, she couldn’t afford rent and got evicted from an apartment close to where she now camps. She wants to get back to work, but when outreach workers have come by, they don’t have much to offer.

*Correction 7/12/22: An earlier version of this story described the event where Bass and Fudge appeared together as a campaign event for Bass. It was an event held in Bass' capacity as a member of Congress and Fudge's capacity as the U.S. Housing and Urban Development Secretary.