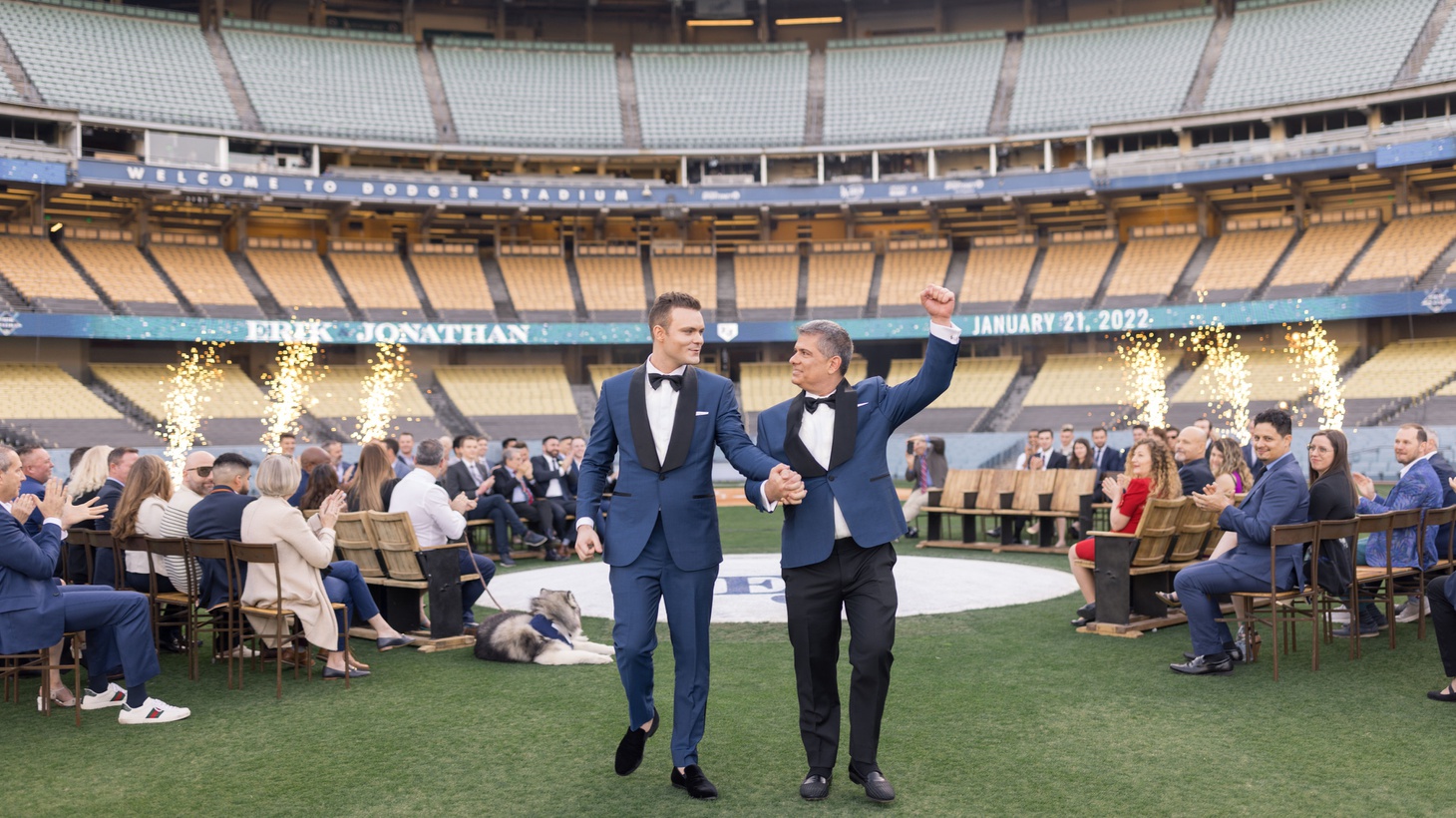 Erik Braverman and Jonathan Cottrell said “I do” in an unusual place: the pitcher’s mound at Dodger Stadium. The couple became husband and husband in front of 75 guests last month. Braverman pulled off the event because of his connections as senior vice president for the organization.

Braverman tells KCRW that he’s been surprised by the attention and new social connections since the ceremony, and this is probably the happiest time of his life.

“Just being at perhaps a cathedral of sports and baseball, to have your own wedding at Dodger Stadium, at such an iconic venue, is a little surreal when it happens. … It’s a pretty powerful message, and it meant a lot to both of us,” says Braverman. 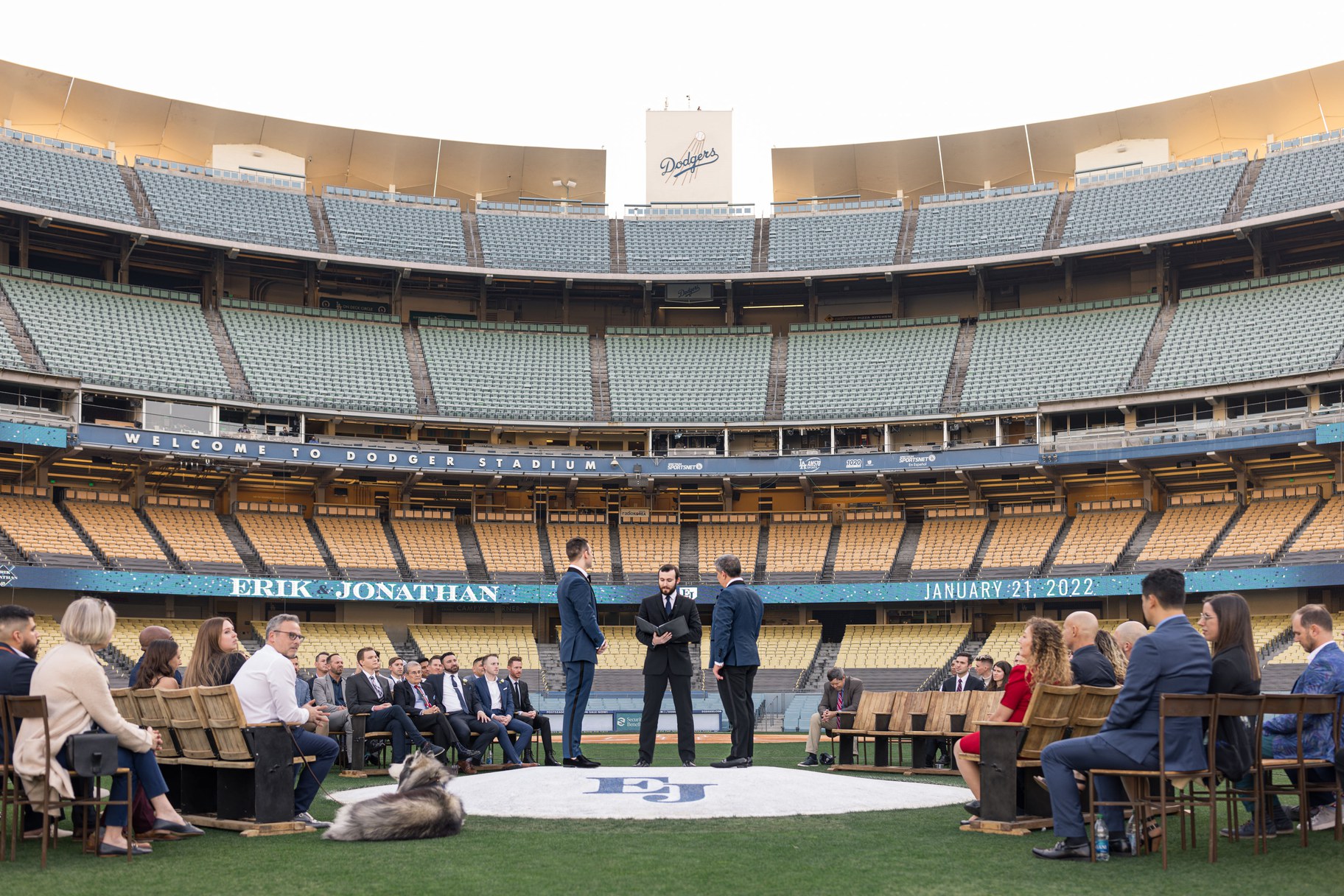 It’s now about a month after Erik Braverman and Jonathan Cottrell got married at Dodger Stadium, and Braverman says this is probably the happiest time of his life. Photo by Anée Atelier.

Cottrell says when he met Braverman, he wasn’t much of a baseball fan, but started liking the sport over the past few years, and it culminated in watching the World Series in 2020.

Now that he’s Braverman’s partner and husband, he’s an extended part of the Dodgers organization, Cottrell adds. “I’ve really felt embraced by all the people that work around Erik. I did not expect that out of a sports organization, but really they’ve been so welcoming and kind to me over the last few years.” 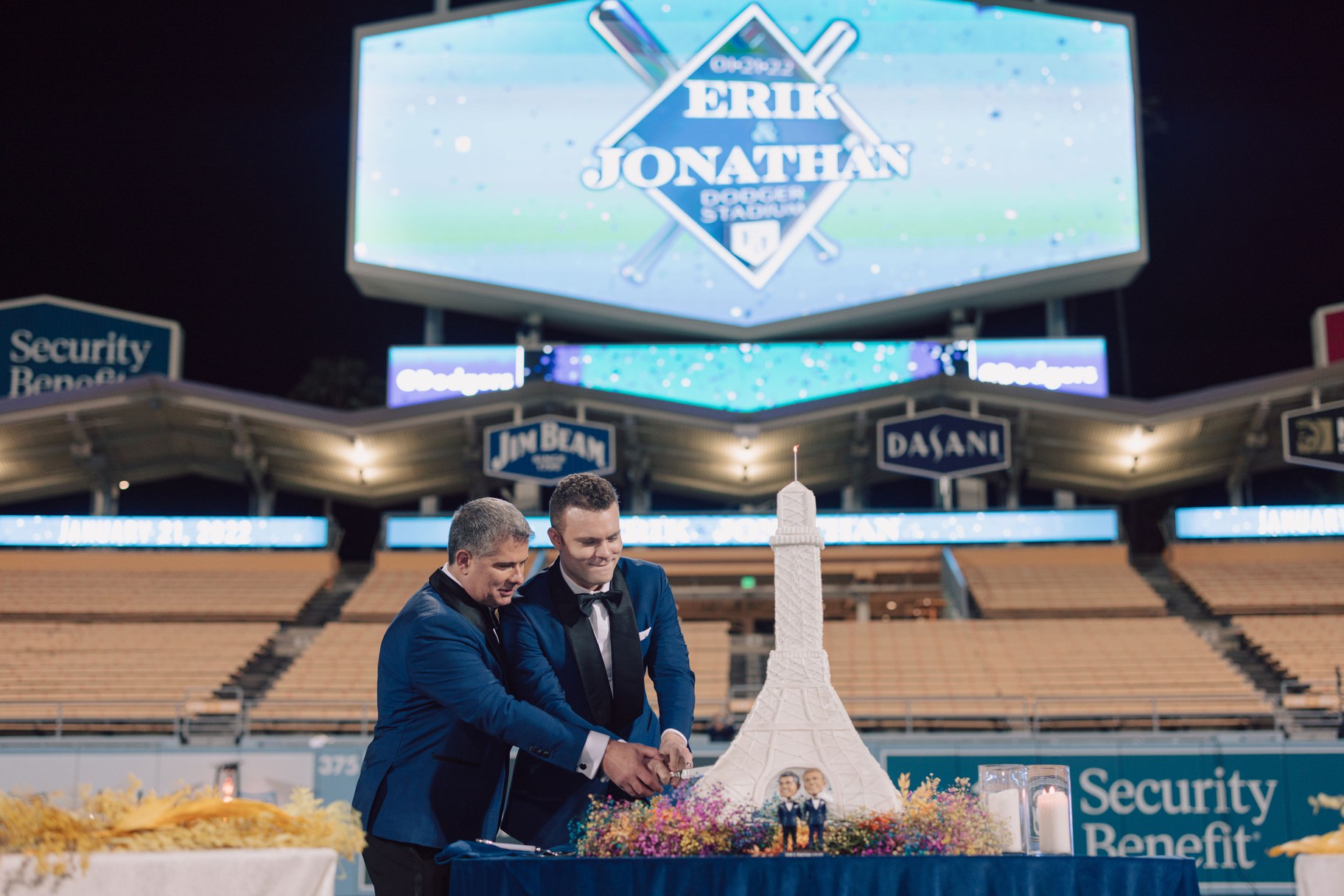 “I’ve really felt embraced by all the people that work around Erik [Braverman]. I did not expect that out of a sports organization,” says Jonathan Cottrell. Photo by Anée Atelier.

Baseball, along with other national sports, has had its challenges in accepting the LGBTQ community. But Braverman believes that progress takes time.

He says, “For many [friends and family at the wedding], it was the first gay wedding for them. And I’d be lying if I didn’t tell you that there were a number of people at the end of it that came up and said, ‘We didn’t know what to expect, but this was just amazing. It was beautiful, it was just two people showing their love for each other.’ I think it takes that and time for things to change. And we’re really happy to be a part of that movement.” 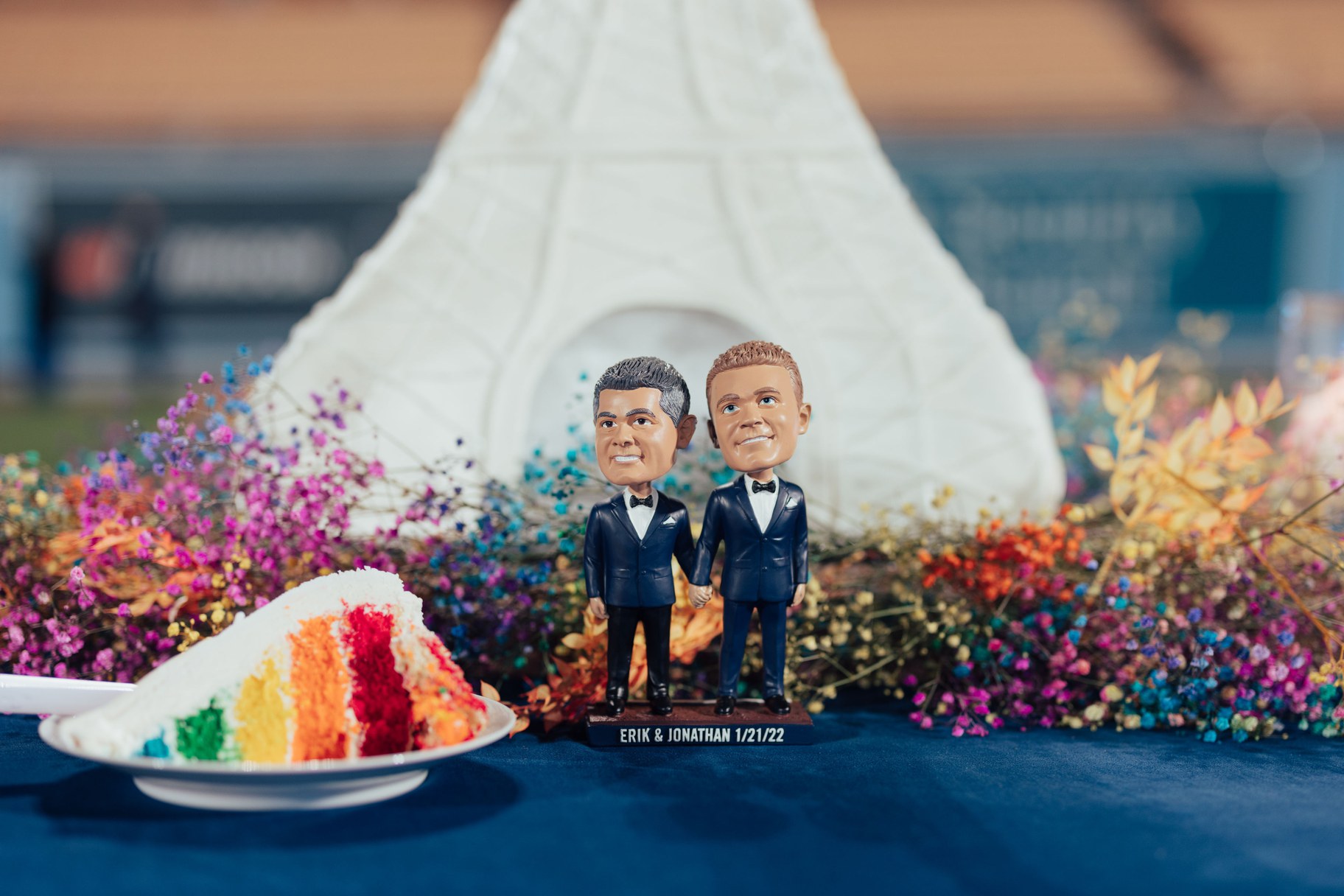 The LGBTQ pride flag factored into the design of the wedding cake for Erik Braverman and Jonathan Cottrell. Photo by Anée Atelier. 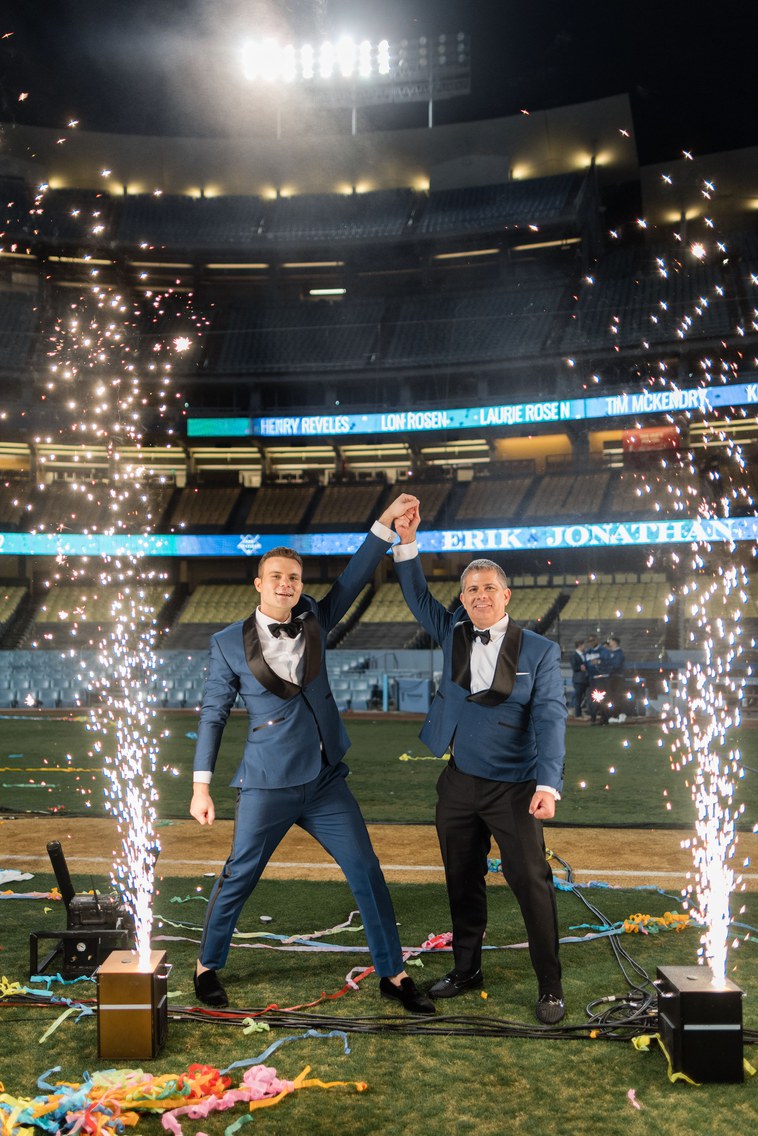 “To have your own wedding at Dodger Stadium, at such an iconic venue, is a little surreal,” says Erik Braverman. Photo by Anée Atelier.

LA’s latest pop-up, The Break Up Bar, is a safe space for haters of Valentine’s Day. Patrons here can find healing together.

Erik Braverman and Jonathan Cottrell talk about getting married on the pitcher’s mound at Dodger Stadium, and how it’s taking time for pro sports to accept the LGBTQ...

What in carnation? Why fresh flowers are in short supply

Flowers are in short supply worldwide due to the pandemic and supply chain issues. California florists are getting creative in case their orders can’t be filled.