Georgeann Ayers used to camp by the Penmar Golf Course. Now she stays in a tent closer to the beach. Photo by Anna Scott.

Last year, unhoused people pitched more than 80 tents next to a jogging path beside the Penmar Golf Course near Venice Beach. It drew complaints from nearby residents. Then in the fall, LA City Councilmember Mike Bonin led an effort to move the people from the encampment to motel rooms and connect them with social services. Within a few weeks, the jogging path was cleared and city officials erected a chain link fence around it, which remains up today. Bonin and other officials declared victory.

“When we can house 70 people within three weeks, I consider that a tremendous win,” Bonin said in November. “And I hope it’s the kind of progress we can replicate and move on throughout the city.”

Now, Bonin is fast-tracking a similar plan to clear hundreds of tents from the Venice boardwalk. The effort is scheduled to officially start on Monday, June 28, and unfold over six weeks. It’s been partly accelerated because of LA County Sheriff Alex Villanueva’s recent vow to clear the area himself by July 4.

But the promise to clear tents from the iconic Venice boardwalk raises important questions: Will the effort transform hundreds of lives and a beloved strip of beach as people living on the street find permanent homes? Or will it simply push people experiencing homelessness into less visible areas so officials can declare victory as LA’s tourist season hits its peak?

To answer that question, KCRW took a closer look at what happened after the Penmar encampment was cleared, and where the unhoused people who stayed there are now.

“Pretty much all of us are here”

Most, according to information provided by the Los Angeles Homeless Services Authority, are in temporary shelters, back on the street, or unaccounted for. A small fraction are in permanent housing.

Venice nonprofit St. Joseph Center headed outreach at the Penmar encampment and identified approximately 100 people living there when the city swooped in last fall. Initially, about 70 people went to temporary motel rooms, while the rest scattered to other locations. According to Los Angeles Homeless Services Authority (LAHSA), 46 people stayed in the motels long enough to enroll in crisis housing programs, mostly through Project Roomkey. That’s the statewide program, which started during the pandemic, to place unhoused people in motels. It’s currently winding down.

Of those 46, one person remains in Project Roomkey today. Fourteen people have matched through a county database to either an apartment or a rental subsidy. It’s not clear how many have actually moved into those units. Fifteen people found their own places to stay or are unaccounted for. LAHSA says another 15 are still “being engaged and receiving services,” and are either in temporary shelters or on the street.

So where are all those who went to motel rooms and then left? Or are now unaccounted for?

Some are just down the street from the golf course, in tents. 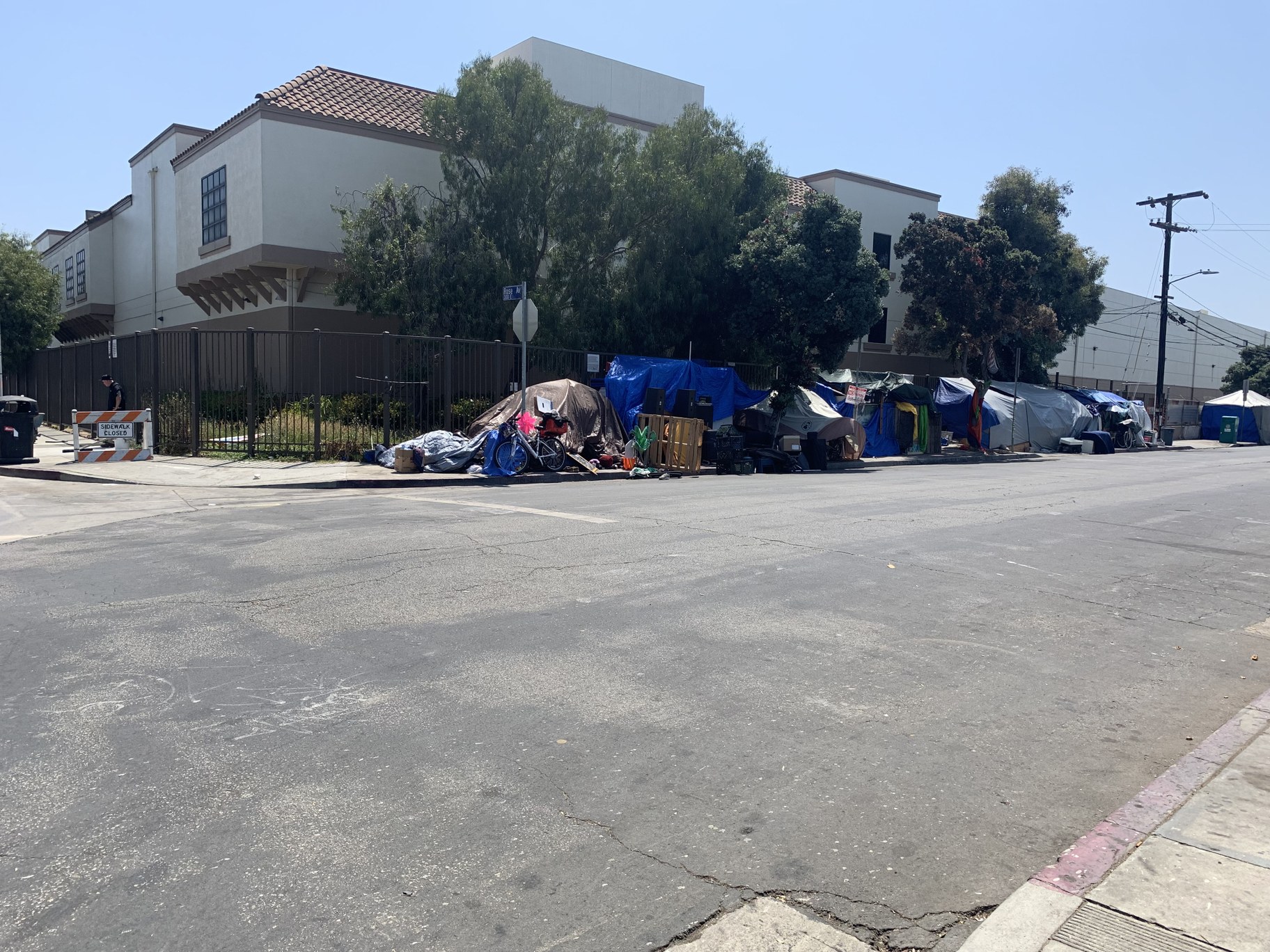 Several people who used to camp beside the Penmar Golf Course now stay in or around this encampment off Rose Avenue, closer to the beach. Photo by Anna Scott/KCRW

Douglas Lewis bounced from the Penmar encampment to Project Roomkey and then to the streets again. On a recent afternoon, Lewis sat outside one of the many tents that line a mostly commercial street off Rose Avenue. Lewis said he knows several people from the golf course who are back outside now, or never went inside. “And not just this street either,” he added. “[They’re] all over Venice.” A half dozen other unhoused people backed up what Lewis said.

“Pretty much all of us are here,” said Georgeann Ayers, another former Penmar camper now living around the corner from Lewis. She surveyed the tents lining the sidewalk and ticked off a list of names. “A lot of them are down at the beach too,” she said.

Eight months after Councilman Mike Bonin declared the Penmar clean up “a tremendous win,” he acknowledged many of the same people are still sleeping on the streets of Venice. And that has informed the plan for Ocean Front Walk along Venice Beach.

“In some ways, the program is similar,” he said. “And in some ways, it is very much the opposite.” The big difference, Bonin said, is that the outreach planned for Ocean Front Walk comes with permanent housing set aside from the start, including dedicated apartments and rental vouchers. It is, he claimed, what he intended to do with Penmar, but didn’t have the resources for at the time.

Last spring, Bonin proposed to his colleagues duplicating an effort in South LA that was chronicled in the LA Times, which transitioned people from one large encampment into two apartment buildings. Bonin asked for about $700,000 in federal COVID-19 relief funding to help lease apartments, get rental subsidies and secure shared housing for people living by the golf course. The proposal never went up for a vote. Instead Bonin enlisted St. Joseph Center and county officials for housing and shelter assistance, which is how dozens ended up in Project Roomkey.

Lewis said the transition from living by the golf course to the structure of Project Roomkey was tough. He said he was kicked out of the program after violating curfew twice. Lewis described the motel as chaotic, with inadequate services to help people adjust from the streets to the strict rules of Project Roomkey. The neighbors near those Roomkey motels also complained that the buildings lacked services and security.

St. Joseph Center President and CEO Va Lecia Adams Kellum told KCRW the new plan for Ocean Front Walk draws on lessons learned. “It’s really hard without having a throughline to permanent housing,” she said. “Penmar was a really rushed project. We were not able to fully line up the permanent housing resources. And that's a key component of [the beach] effort.”

Bonin has asked the city to put $5 million into helping fund his proposal for Ocean Front Walk. A vote by the full city council is scheduled for July 1.

“With a crisis this big you have to keep trying,” he said. “You have to keep using different resources when they become available. We have more tools than we had a year ago.”

LA cleared a homeless camp near a Venice golf course and declared it a success. Was it?

Last year, unhoused people pitched more than 80 tents next to a jogging path beside the Penmar Golf Course near Venice Beach. It drew complaints from nearby residents.

A team of 42 students from The Archer School for Girls in Los Angeles have been working on a solution to a real-life problem: how to prevent wildfires from destroying homes.

Have you hit the trails this year? Give back by joining a trail crew

Many Southern Californians found refuge in the woods during the pandemic. Some took strolls through their neighborhood park or hiked into their local national forest.