Desert Hot Springs is the lone Coachella Valley community north of the 10 freeway. Sitting in the middle of the San Andreas Fault, the city has long been known for its mineral waters that are rich in lithium. Depending on where you are in town, the natural spring water rises to the surface either piping hot or quite chilly. Photo by Matt Guilhem/KCRW.

The Coachella Valley town of Desert Hot Springs has been on the map for generations as a wellness destination. The mineral waters underneath the town are famous for their curative properties.

While it’s been known as “the spa city” for its dozens of resorts, it’s looking to expand its portfolio. Marijuana is growing in fenced off, unmarked industrial buildings southwest of downtown in what until recently was wide open space.

Inside the grow operation at Desert Underground, the hum of fans is a constant in the 40 climate-controlled rooms used to cultivate strains of weed with names like “cereal milk,” “apple fritter,” and “banana split.”

Ethan Woods is Desert Underground’s CEO, and he sees a future where this unremarkable patch of desert becomes a destination.

“You know I see it potentially evolving as like a Napa or Sonoma Valley if everything comes together at the same time,” says Woods. 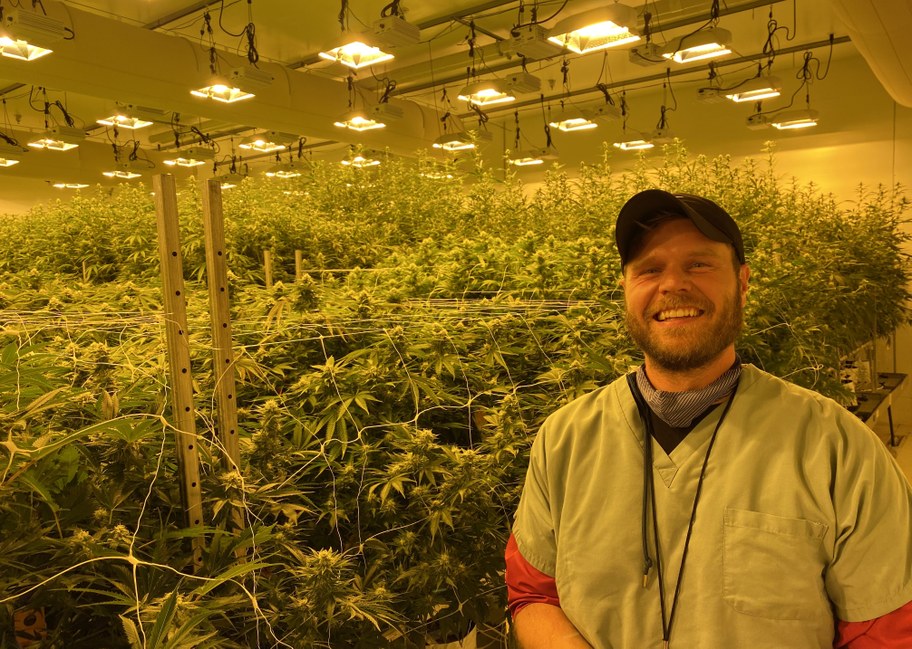 Desert Underground CEO and co-founder Ethan Woods arrived at the weed economy via a winding road. The East Coast native started on Wall Street, took a trip around the world studying the maritime spice routes, worked at a supply chain consulting firm, and then got into private equity before helping found the cannabis cultivation operation in 2017. Photo by Matt Guilhem/KCRW

Taking in a grow room full of pot plants is a little more difficult than wandering through a sun-drenched field of grape vines. Before stepping in, you have to put on scrubs, cover your shoes with booties, and be sprayed down with alcohol. It’s less a greenhouse than a NASA operation.

“Every single piece of data from this room gets tracked,” Woods says as he surveys hundreds of pot plants. “We do temps, we do humidities, the number of gallons, the pot size, the electrical conductivity of the coco. We’re looking at each different bad bug and each different good bug, bacteria, and fungi that goes in.” 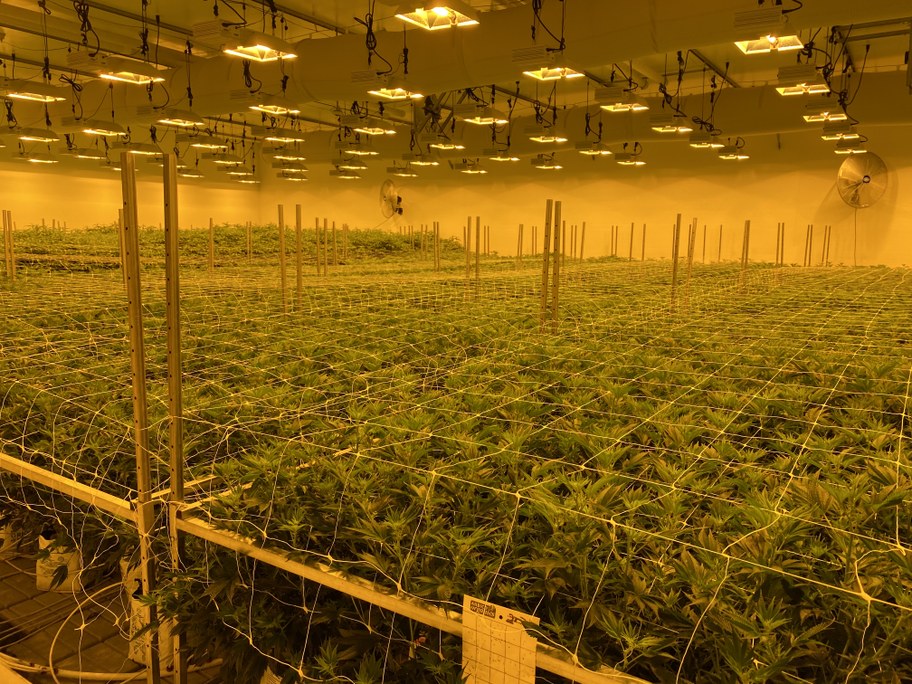 Special lighting provides a necessary boost to Desert Underground’s cannabis crop, which is known for its potency. The company is a weed wholesaler that sells most of its harvest to celebrity-backed pot brands. However, the company recently launched its own line of loose-leaf cannabis items under the name Screaming Trumpets. Photo by Matt Guilhem/KCRW

Bathed in special, far-red spectrum light as he makes his way through the room,Woods says his business is part of the green rush set off when California voters decriminalized cannabis.

“It’s kind of a race with towns in California to see who can roll out the red carpet to the industry the fastest because there are weed meccas that are starting to form in different parts of the state,” says Woods as he beams like a proud parent next to his plants. “Desert Hot Springs was right at the cusp of it, and I think right now there’s a lot of really good folks on the inside there that are trying to figure out what the next level is.”

Weed has been a lifesaver for this once cash-strapped city. Teetering on the brink of insolvency about a decade ago, the cannabis industry approached Desert Hot Springs about allowing cultivation in 2014, before recreational use was legal. The city was willing to take a chance, and voters overwhelmingly approved a pair of tax measures to ensure there was a reward for taking a risk.

“Since the industry has come in, we’re not in any way, shape, or form in a position where we’re building parks hand-over-fist, but last year alone we closed the year with over $11 million as a fund balance, which is unheard of,” she says. 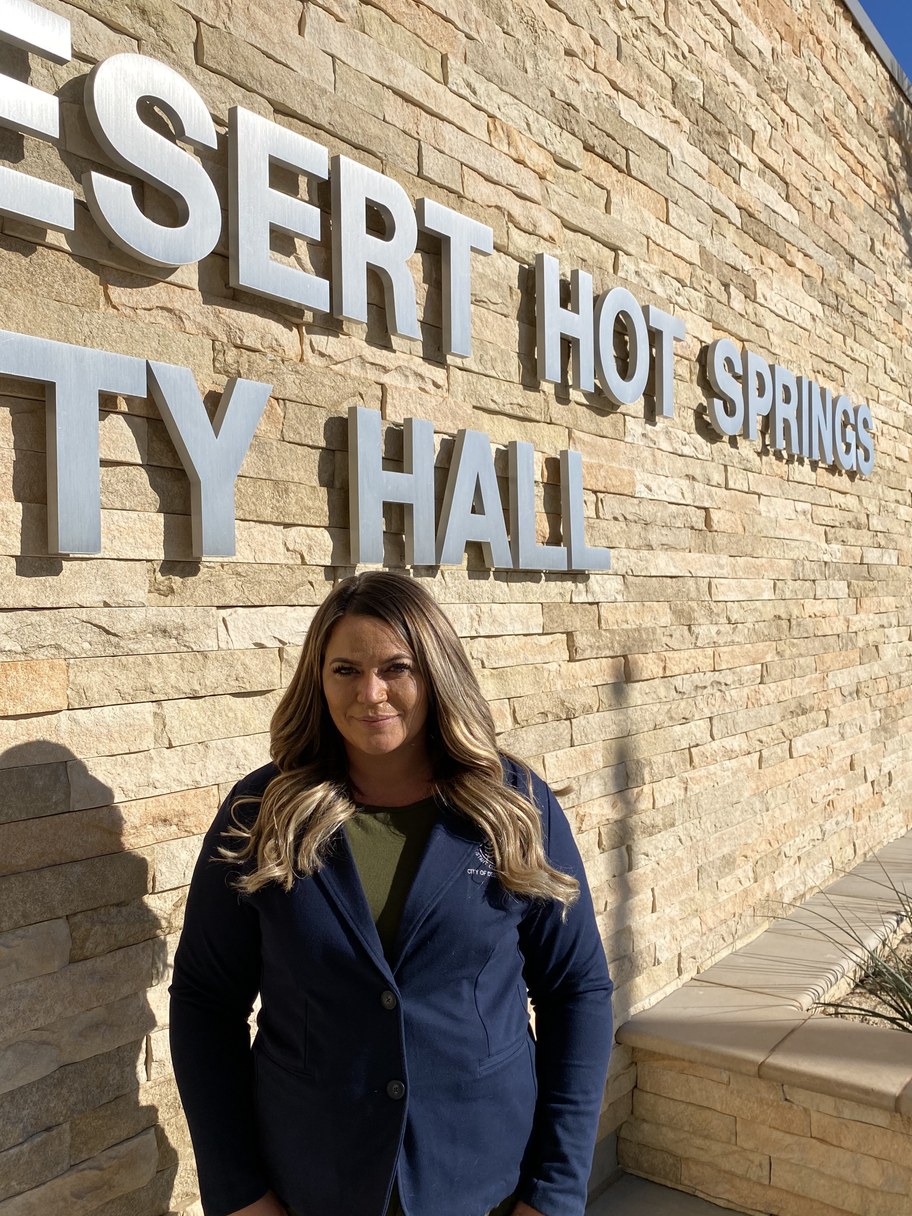 A Desert Hot Springs native, Assistant City Manager Doria Wilms has seen the changes brought about by the cannabis industry since the city green lit cultivation in 2014. Photo by Matt Guilhem/KCRW

Over the last few years, the industry’s footprint has risen to about 350,000 square feet. But the cannabis sector in Desert Hot Springs is growing, well, like a weed.

“We anticipate by the end of fiscal year 21-22, just in that year alone, we will see another 350,000 feet of cannabis space come online and become operational,” Wilms says.

Now the city is expanding it into the tourism realm. It’s part of their “Cannabis Strategic Plan.” Desert Hot Springs has been guided by its multi-pronged pot plan for around five years. Along with components that deal with being a business-friendly city, educating people about the industry, and maintaining public safety, Wilms says one of the pillars is dedicated to cultivating “cannatourism.”

This winter, the city has taken steps to get the ball, or perhaps joint, rolling on that front through a pair of new ordinances.

One sets rules for cannabis hotels. Guests have to be 21 and over, and can partake in select parts of the premises. Products can only be sold to registered guests.

The other sets the parameters for entertainment venues like bowling alleys, arcades, or a concert space. They can have both inward and outward sales, and patrons (all of them 21+) will be allowed to consume on-site.

Developer John Berry is already working on what he describes as a House of Blues kind of place. Berry says the project has really only received one consistent critique.

“‘Heck, people have been smoking weed in entertainment venues for years. What makes you different?’” Berry asks with a laugh. “Well, now they can do it legally.”

Although ground hasn’t been broken yet, Berry has sunk over $1 million  into the project so far and has been working with the city on it for more than a year. 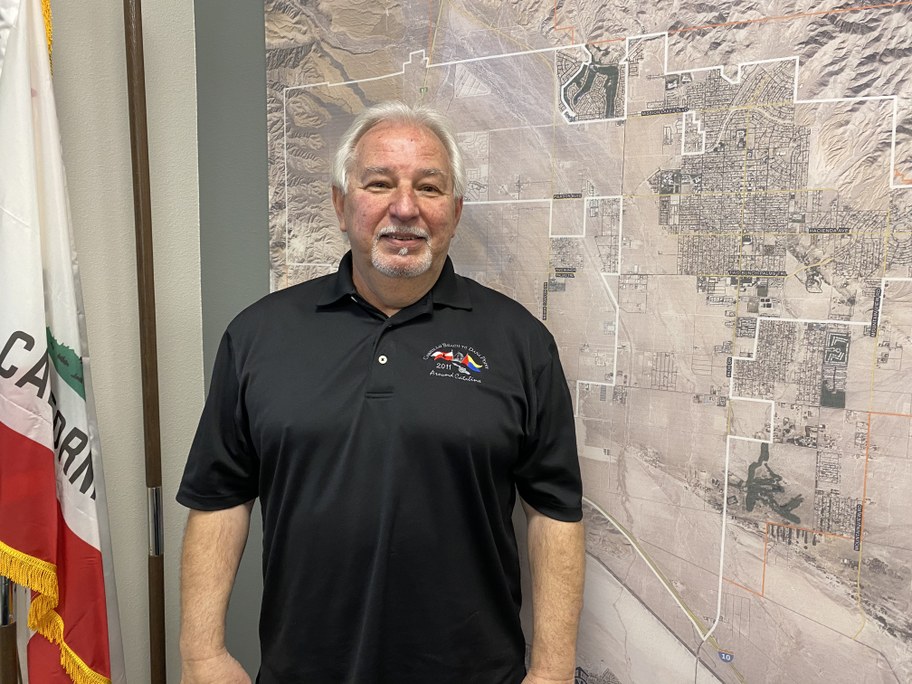 Along with his pot-friendly venue, developer John Berry is looking to build an entire cannabis complex near the 10 freeway. It would be an all-encompassing operation that would include space for everything from growing weed to facilities that would process crops into other cannabis items. Photo by Matt Guilhem/KCRW

“We plan on having a cannabis bar, if you will,” says Berry as he outlines what his venue will have on tap. “We’ll also have waitpeople that will be going to tables and taking orders, whether that’s food or pre-rolls, or whether that’s an edible product.”

But while patrons enjoy basslines and brownies, there’s one hallmark of a night on the town conspicuously absent: booze. California doesn’t allow cannabis and alcohol to be sold together. Until state law changes, Berry is taking a calculated risk.

He thinks his cannabis-friendly venue, the first in the U.S., will welcome guests in about two years. 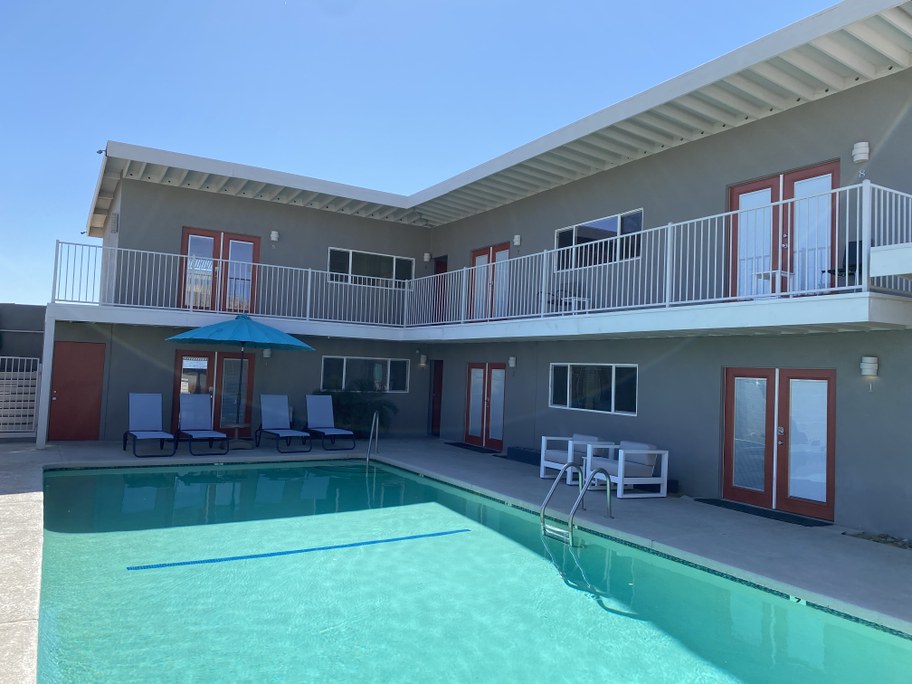 The mineral water pool at the Desert Hot Springs Inn is a permanent (and bathlike) 85 degrees. A hot(ter) tub offers the famed spring waters at an even warmer 105 degrees. Photo by Matt Guilhem/KCRW

While the town rolls out cannatourism on a large scale, one boutique resort in the city’s “spa zone” has specialized in soaking and toking for years.

Since opening as the Monte Carlo in 1957, what’s now the Desert Hot Springs Inn has offered relaxation and hot mineral water pools. Sixty years later, in 2017, it caused a bit of a stir by expanding its relaxation offerings and becoming the city’s first cannabis-friendly lodging.

“People were very appreciative. It was like a big moment of liberty for them to be able to light a joint somewhere and not have to get in the bathroom, stand on the toilet, and blow it into the exhaust fan,” says Innkeeper John Thatcher. 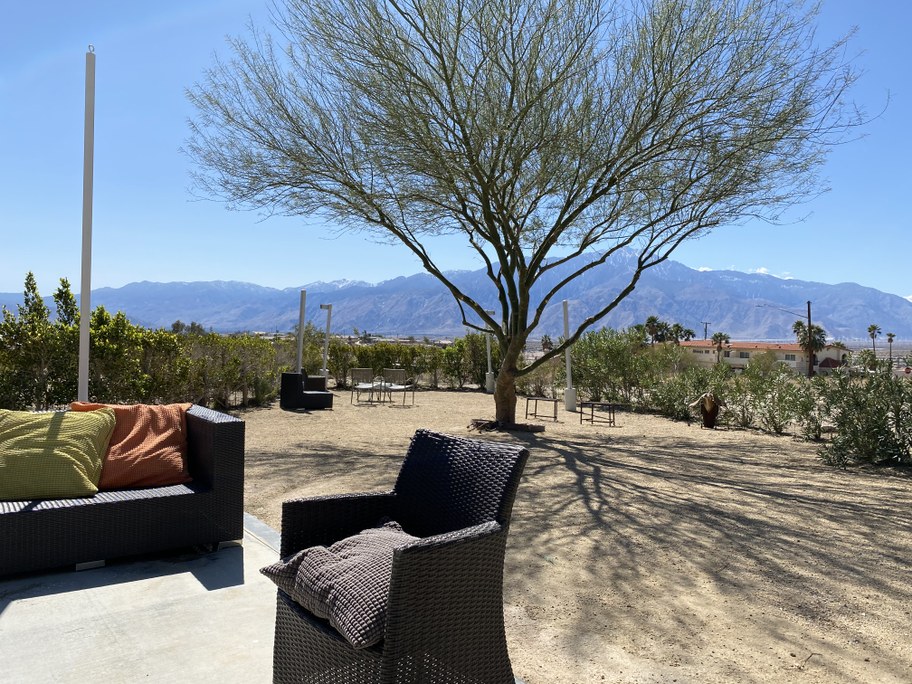 The wide-open cannabis consumption area at the Desert Hot Springs Inn offers sweeping views of the Coachella Valley and San Jacinto Peak. Innkeeper John Thatcher says on weekends, many guests mingle in what he calls “the backyard” and end up swapping phone numbers. Photo by Matt Guilhem/KCRW

He’s sitting in what he calls the hotel’s “backyard.” It’s a restful open space with comfortable chairs and a view of the famous windmills that line the 10 freeway as you enter the Coachella Valley. It’s also the designated cannabis consumption area.

Since going cannabis-friendly, Thatcher says the clientele has defied his expectations. He thought your garden variety basement stoners would show up in droves. Not the case. Many are over 40 and roll up in nice cars, according to the innkeeper.

“They’re good guests to have,” Thatcher says. “They’re very respectful. The cannabis crowd is also a very responsible crowd. They don’t get in the car after they’ve been smoking weed.” 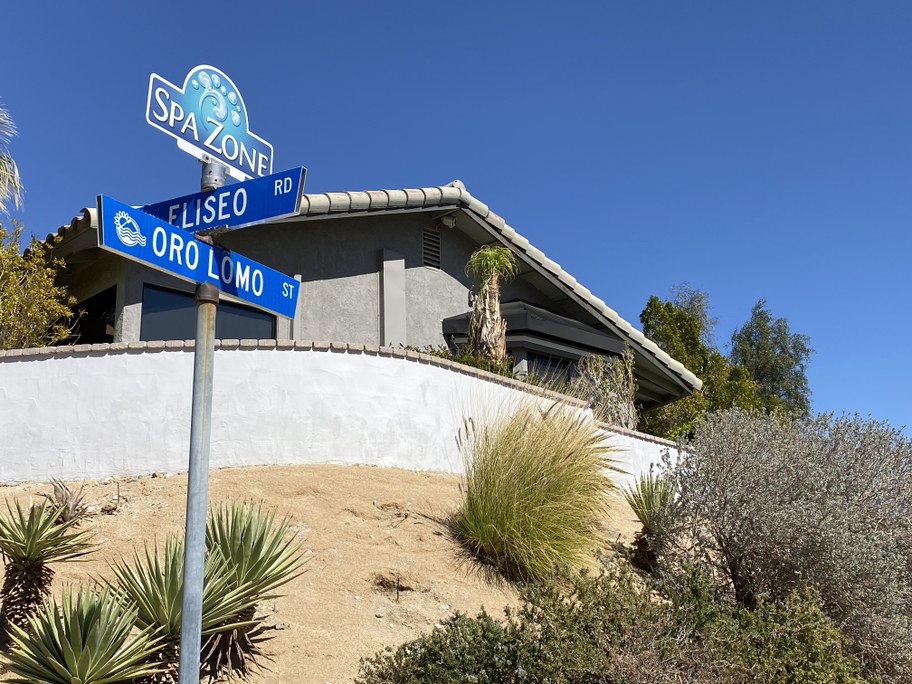 The Desert Hot Springs Inn is tucked away in the “spa zone” of Desert Hot Springs. The seven-room hotel is one of dozens of intimate getaways that encourage guests to “take the waters” as they relax in the warm desert climate. Photo by Matt Guilhem/KCRW

In his experience, drinkers are far more inclined to get behind the wheel after putting back a few cold ones than somebody who’s smoked a joint or consumed an edible.

But if you’re around town and have yet to indulge, there’s a lot of nature nearby, which is another draw for tourists. The city is something of a gateway to Joshua Tree National Park. Plus, the fairly new Sand to Snow National Monument is even closer.

Desert Hot Springs City Councilman Gary Gardner, who also works with the regional tourism bureau, is convinced his town is onto something. 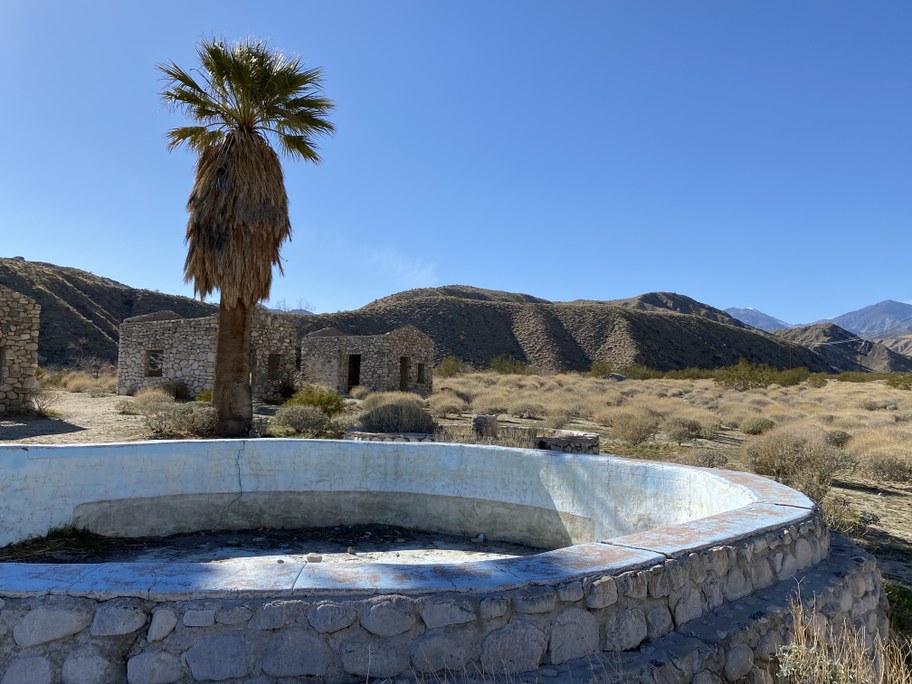 One possible location for the Sand To Snow National Monument visitor center is the site of an old ranch at Mission Creek. Remnants of stone houses, a standalone chimney, and a pool are all that remain of a place that once served as a rural escape for some of Hollywood’s early stars. Photo by Matt Guilhem/KCRW

“I get these odd looks, still to this day, from other hotel people and other tourism people,” Gardner says with a twinkle in his eye. “They think we’re kind of off-our-rocker, and I say, ‘No, you watch, it’s going to cause a renaissance here.’ And I firmly believe that it will.”

Just like Ethan Woods, the cannabis cultivator at Desert Underground, Gardner also thinks there’s a fair amount of overlap between the state’s famed wine regions and this burgeoning cannabis country.

“You have Napa Valley wine, you have Temecula Valley wine. We want to be known for Desert Hot Springs cannabis,” Gardner says firmly. “And I think we will get there.”

Weed has already saved the town economically once. Now as they usher in weed tourism, officials hope the seeds they planted with the Cannabis Strategic Plan — and a lot of business investment dollars — will take root, sprout buds, and flower.

Cannabis tourism heats up in the desert

Long known as “the spa city,” Desert Hot Springs is looking to expand its relaxation and recreational offerings by going big on so-called “cannatourism.”

How will history remember COVID-19? Browse and contribute to LA Public Library’s archive

Through photographs, journal entries, social media posts, and letters, LAPL's COVID-19 Community Archive seeks to help tell the story, and eventually the history, of this...