The Palisades Fire burns through Topanga Canyon, California, May 16, 2021. Photo by Shutterstock.

Shane Burroughs lives in his car. Most days he hangs out near a cluster of shops in Topanga Canyon, halfway between the San Fernando Valley and the beach. He’s lived here for 33 years, and all the business owners know him.

“All the people I love here outside of my immediate family are in this town. I’ve been here my entire adult life,” says Burroughs.

That’s because homeowners here — and in other Southern California neighborhoods surrounded by dry brush — are worried their unhoused neighbors could spark a fire that would devastate their community. 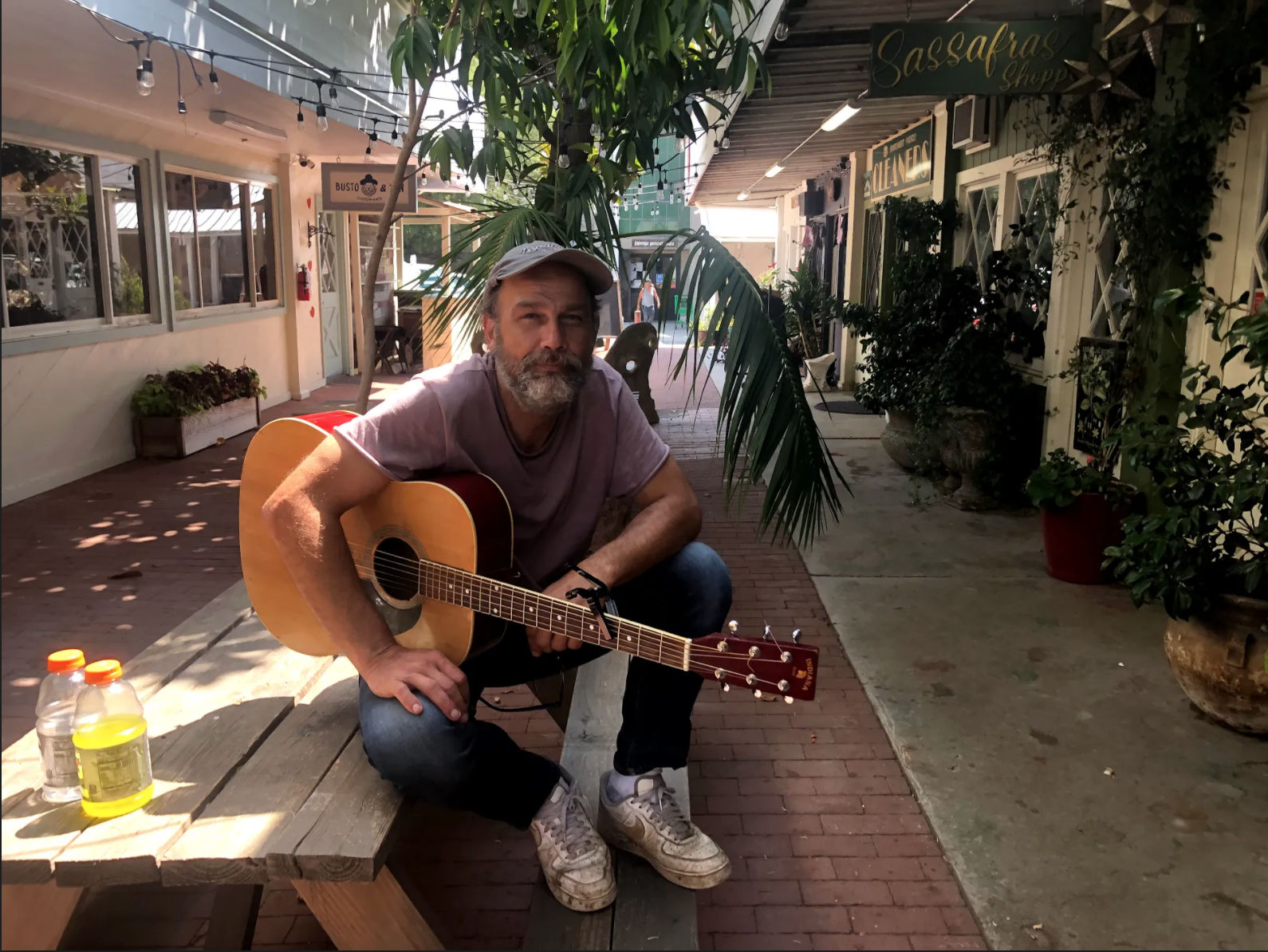 The Los Angeles County Board of Supervisors shares those fears. That’s why last month, they voted to ban homeless encampments in high fire risk areas of unincorporated LA County. Now comes the hard work of providing people in those encampments somewhere else to live, including those who don’t want to go.

Sabine Niederberghaus has one of the riskiest properties in Topanga. The land that lies between her home and a stunning ocean view is shaped like a bowl, giving any wildfire a straight shot to her home. In fact, the house that was here before burned down in the 1993 Topanga Fire.

Niederberghaus bought the empty lot that remained. Last July, a wildfire got within a few miles of her home before firefighters put it out.

“So I decided to start a new initiative. And I said we all have to get together, and we have to do something about this. Because we know where the fires are coming from, where they are started, what the cause of the fires is, and we have to make the situation better,” she says.

So starting in July, she hosted fire safety meetings for dozens of Topanga residents. They’ve discussed their concerns about fires, including the risk of fire from people living in tents or cars in the canyons. 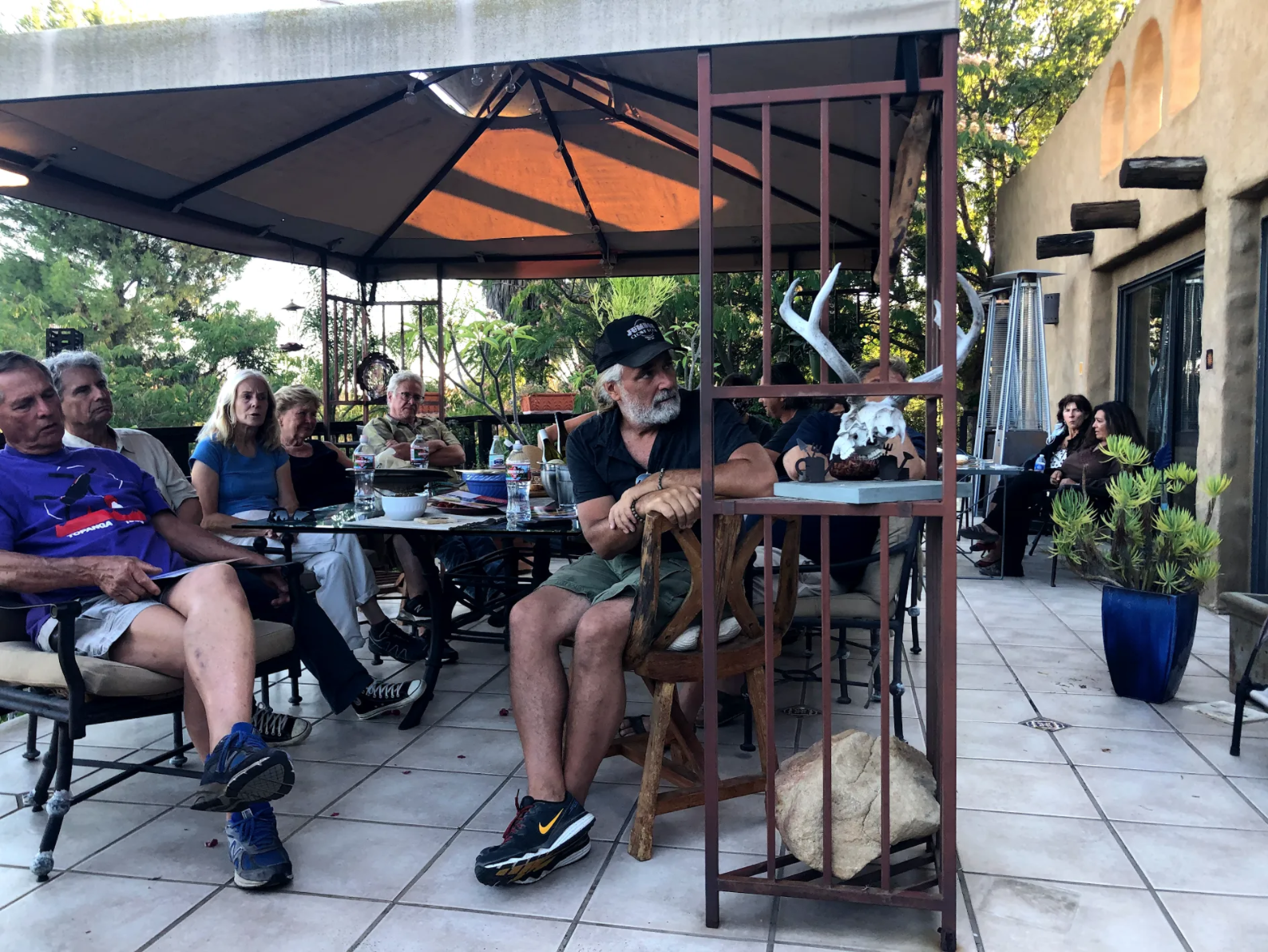 A couple dozen residents of Topanga gathered to discuss ways to mitigate home destruction in the next wildfire. Photo by Caleigh Wells

“I don't say that the fires are caused by [the] homeless or encampments,” she says. “I call it … irresponsible human behavior.”

“If a fast-moving wildfire ... comes through, it could theoretically go from one point of the canyon to the other in a matter of a couple of hours. Meanwhile, it would probably take us between five to seven hours to actually evacuate every single known resident of the canyon,” she says. “So you can see where the unhoused themselves are at such extreme risk should a wildfire tear through the area. And it just literally puts their lives, I would say, most in peril of all, because they have the least reliable way of being informed of a fire, and being evacuated in the event of a fire.”

LA County Supervisor Sheila Kuehl, whose district includes Topanga, says she understands those fears and wants to help people in the canyon with nowhere else to live to relocate. “It doesn't mean that they can't still be homeless somewhere. It just means they can't be homeless in these zones,” she says. “It's just too dangerous to everybody.”

The new ban requires the Sheriff’s Department to find everyone camped in high fire risk areas of unincorporated LA County, offer them shelter, and make sure they move. The Sheriff’s Department didn’t respond to multiple requests for comment, but residents say they’ve heard that homeless outreach deputies have been by more often recently.

Shane Burroughs is not ready to go. “Good luck. It’ll never happen,” he says. And he points out fires start for lots of reasons.

Burroughs says if anything, people living outside are savvier about wildfires.

“The homeless people around you are your first line of defense because … they're the people who are going to find out first what's going on. And at least up here, we tend to want to preserve our life up here and other people's lives. It's not in our interest to let anything run amok,” he says.

That doesn’t comfort the homeowners in Topanga. Plus, Kuehl says she’s confident that most unhoused residents will be willing to move.

“I don't know. It's sticky and hard. But the truth is most homeless people do not turn down a bed. It's not like, ‘Oh, I love being out here and dying slowly in the open air.’ It's not fun to be homeless,” she says.

Burroughs will do what he can to stay because he’s made a life for himself in the canyon, and for 33 years, he’s called Topanga home.

Wildfires are often sparked by residents struggling with homelessness. LA County recently banned encampments in some of the highest fire risk areas. Homeowners in Topanga...

We’ll try to keep your kids safe, regardless of your politics: LAUSD’s Jackie Goldberg on vax mandate

LAUSD Board member Jackie Goldberg already expects legal pushback to the vaccine mandate for LAUSD students. “Yes we’re assuming we will be sued. … It will be settled in...

BLVD MRKT is a new food hall on the corner of Whittier Boulevard and South 6th Street in Montebello. It’s made up of seven repurposed shipping containers, two indoor...