Amoeba Music reopens in Hollywood. How will they survive in a streaming world? The new Amoeba Hollywood location features an in-store performance stage with a mural by Shepard Fairey. Photo by Gina Faridniya.

It’s a late March evening in Hollywood, and Amoeba Music co-owner Jim Henderson is taking a much-needed break from preparing for the store’s April 1 reopening at its new location on the corner of Hollywood Blvd. and Argyle Ave.

“I’m sitting in one of the new back offices,” Henderson tells KCRW. “It’s filled with junk and boxes, a bit of a mess. It’s a metaphor for myself.”

Joking aside, Henderson concedes that after a year of being closed, there was a real possibility that this moment may have never arrived.

“It's been a really challenging year for us,” he says. “I really just couldn't overstate that, with not only being closed, but also financing a move, and the build-out of a space that … had to be built out essentially from scratch.”

Since Amoeba Hollywood’s original location opened in 2001, the 24,000-square-foot neon-lit building at the corner of Sunset and Cahuenga Blvds. has become a landmark destination for both international tourists and LA’s most discerning and hungry cultural consumers. Boasting the title of “the world’s largest independent record store,” Amoeba, which also has locations in Berkeley and San Francisco, has remained a rare stalwart in the world of music and pop culture retail, and perhaps the last archetype of the once-thriving record stores of yore.

Beyond its expansive selection of vinyl, DVDs, books, posters, and T-shirts, Amoeba Hollywood has carved out a niche for itself as an in-person experience where visitors can spend hours browsing, consulting the store’s famously knowledgeable staff, selling and trading merchandise, and catching intimate in-store performances and record signings from international touring acts.

But Amoeba’s iconic neon-wrapped signage went dark last spring. The pandemic accelerated pre-existing plans to move, after the building’s owners declined to renew Amoeba’s lease in favor of a new development on the site. Saddled with two rents, moving costs, and the absence of in-store sales, Henderson says community support, including a $400,000 GoFundMe campaign, has provided a critical lifeline to help Amoeba finally open its new doors today.

He speaks with KCRW about surviving the past year, redesigning a record store for the streaming era, and what Amoeba fans can look forward to in the new space. 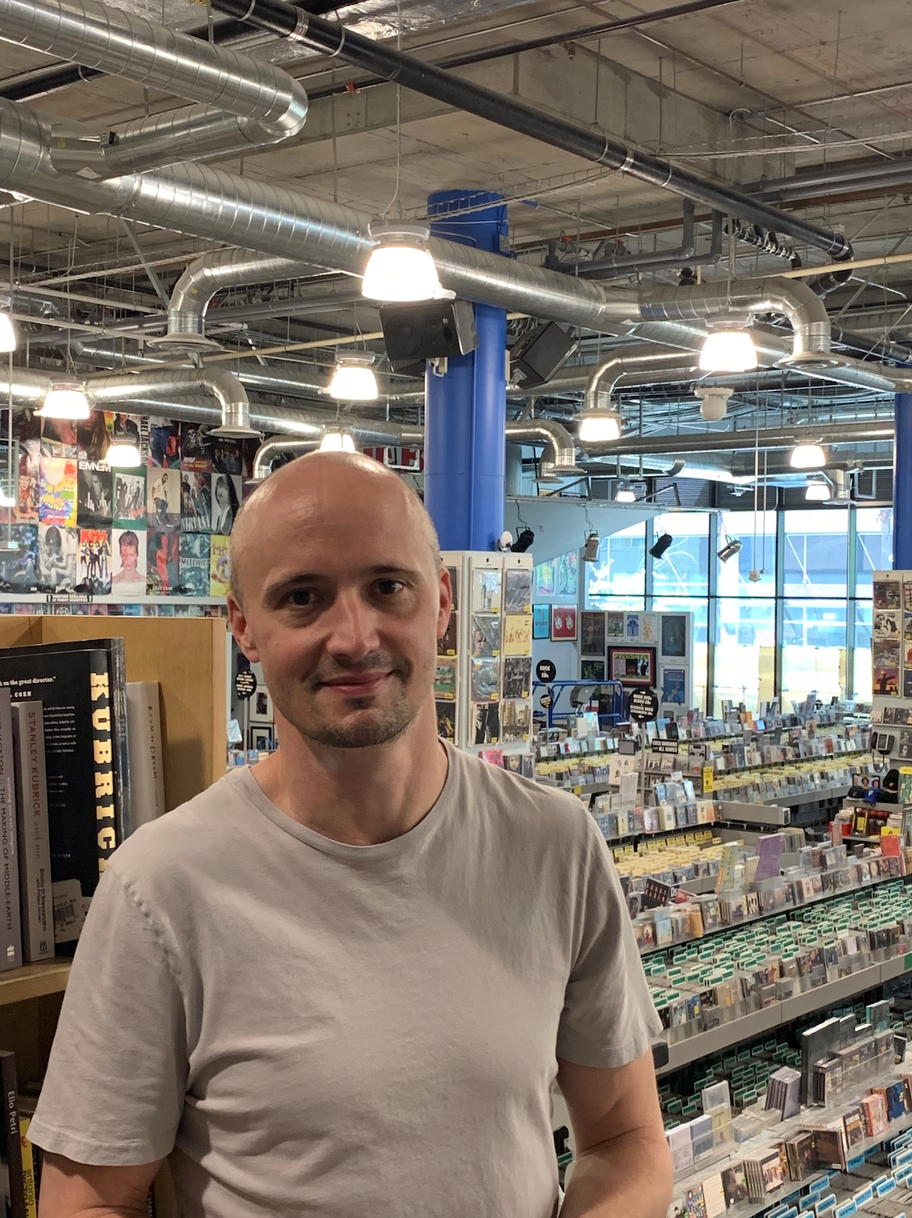 Amoeba co-owner Jim Henderson takes stock of the store’s new location ahead of its opening on April 1. Photo by Kara Lane.

KCRW: Amoeba’s identity is so tied to its physical space. What were your considerations in choosing a new location?

Jim Henderson: “All along, we knew we'd be staying in Hollywood. We’ve got to be in the right community and on the right streets. We have to consider parking, freeway access, walking traffic, diversity in the community. Tourism as well. Those were all qualities that we've sought out in our three stores. We knew the new space would be big because that's our profile, and our deep selection and expansive retail environment is our trademark. We knew we weren't going to turn into a smaller mom and pop-style store. We were just lucky enough that we found a space that represented the retail side of things, as well as this one does for us.”

What’s different in the new store? What goes into thinking about reopening a space for physical music in the streaming era?

“We felt like we had an opportunity to disrupt our own business model, in a way. We had to take it apart and put it all back together in ways that are more appropriate for the time and the new location. It was exciting for us to design the store for 2021, and not for 2000, when we started moving into the Sunset location.

Being able to do that means taking all the information that we've gleaned from the old spot, from what the world is telling us, and from what our community is telling us about the state of the music industry and physical retail, and trying to make something that was, importantly, very deep and respected the traditions of Amoeba. But then also balancing that out with a fresh, new, more vibrant look.

We brought in more color, and we played with the vertical space a little bit better and in more interesting ways. And we made commitments to sections that were on the rise in our other space that we couldn't expand because of logistical challenges. The differences are many, but the similarities are also pretty pronounced. There's this balance of fresh and familiar that play well together.” 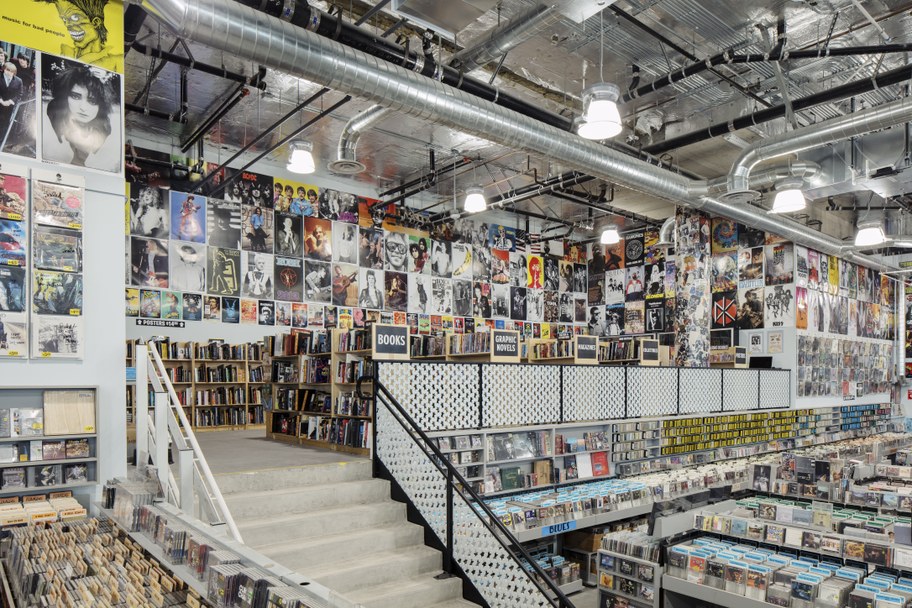 “The differences are many, but the similarities are also pretty pronounced,” Amoeba co-owner Jim Henderson says of the new space. “There's this balance of fresh and familiar that play well together.” Photo by Gina Faridniya.

What’s an example of how you decided to adapt to the needs of today's music consumer? What are some of those new needs?

“The most obvious one is making more room for vinyl sales. It's where physical purchasers are going, and less to CD, DVD and Blu-ray. Also, people like to buy around different formats. So you might be looking for a specific artist’s record, but then you might be interested in a book about that artist, or a T-shirt for that artist, or some other kind of tchotchke that would be fun to pick up. So creating a little bit more of a wide spread with the pop culture stuff, and still going really deep on music as our cornerstone is what defines the space a little better.”

Amoeba is also known for its live in-store performances, which had really become a destination for fans and artists alike. Is that coming back?

“Yes. Our live shows are a big part of who we are, and it's a really great opportunity to pull the community together. The free show, the all-ages show is a time where the whole identity of the store just shifts over to a venue and allows us to wear a few different hats and let people get really close to the artists that they admire and love.

So when it's safe to do so, we'll go back to doing that. We've got a great stage with a beautiful mural that Shepard Fairey made for us. It’s a real focal point of the new space. It’s touching social angles and music angles, and it's something we're really excited for people to see.”

One thing people really love about Amoeba is that it’s a space you can just get lost in for hours. What, to you, makes a great physical record store today?

“It's the vibe. You've got to have the right people, people that have a passion for the music, the movies, and the arts that we’re selling or representing. The people that are really diverse and allow a cross section of the world to congregate and to be themselves. What people like about record stores in general is that there's a lack of judgment. Regardless of whatever genre or artist you're into, it's a place where you can be self-expressive with very little pressure on you.

There aren't too many retail stores where people identify with or still have a true appreciation, love, or connection to the product. How many stores do you go into that you feel like it moves you? Record stores provide a special experience, and we certainly feel a responsibility to meet those expectations in this new space.” 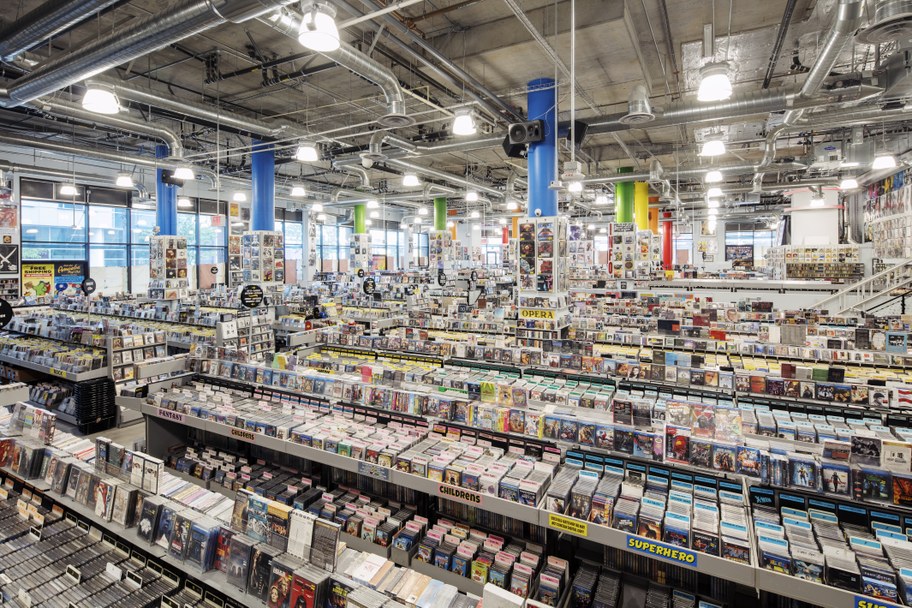 “Record stores provide a special experience, and we certainly feel a responsibility to meet those expectations in this new space,” says Amoeba co-owner Jim Henderson. Photo by Gina Faridniya.

How has the pandemic impacted both the move and plans for reopening?

“It's certainly brought on a lot of challenges, from doing the build-out through the course of a pandemic, moving out of our old space with minimal hands because of social distancing, and having a lot to do with very few hands available and with a high degree of diligence and respect for the health guidelines. So getting from point A to point B was enough of a challenge, and now opening and dealing with people starting to flood through again, we'll just increase our level of responsibility so that we are really being diligent about providing an exciting and fun experience, but a very safe one and that we take very seriously.”

How have you fared business-wise? Some local music retailers have seen a big boost in online sales during the pandemic, but has that been the case for Amoeba?

“We saw some modest increases with online sales, but our online operation is a small fraction of our overall sales, so it's been a really challenging year for us. I really just couldn't overstate that, with not only being closed, but also financing a move and a build-out of a completely raw space that needed everything from plumbing to lights to electricity.

… We're lucky that we've got tremendous support from the community. People have been really responsive and positive, both to the fact that we had to stay closed as long as we did, and also the fact that we're opening. People seem wildly excited about it.” 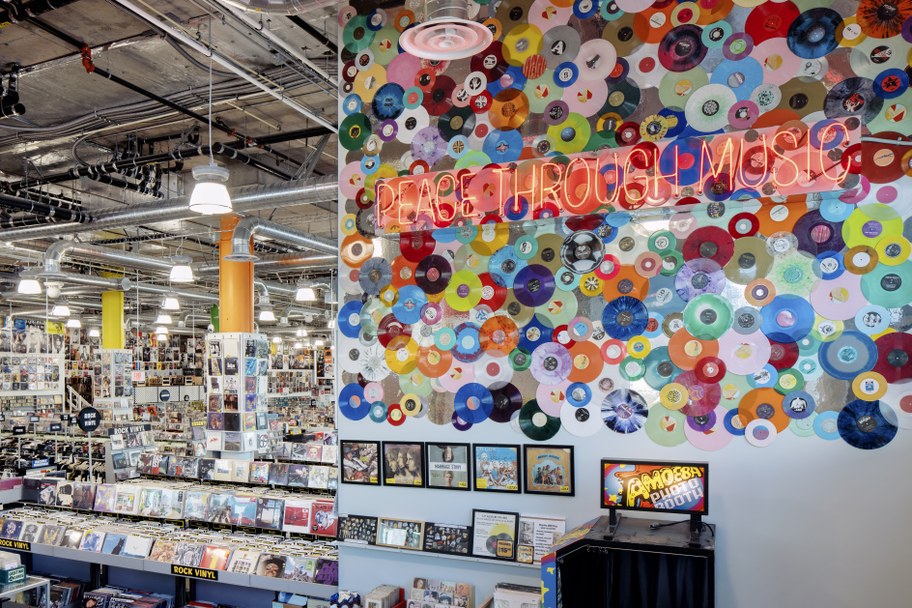 Amoeba co-owner Jim Henderson says community support for the store during the pandemic has been “spiritually buoying.” Photo by Gina Faridniya.

Was there concern at any point that you might not be able to come back at all?

“That was a very real possibility. We kept our staff insured through this process, and insurance is not cheap. And in order to do that, at one point, we actually did start a GoFundMe campaign. We were met with such a humbling response from the community to help bridge the enormous gap that we had. And so little things like that were not only helpful financially, but they were just spiritually buoying.”

For a lot of businesses right now, especially in the music world, the question of reopening and surviving are two different things. Is that a concern for you?

“Survival is certainly something that we view as not guaranteed. But we also feel pretty optimistic. Maybe it's just the moment that we're in, being so close to opening and with certain restrictions lifting and the COVID numbers go down to a level where things seem manageable, and people are getting vaccinated. So there's a fair amount of optimism as much as there is still a lot of devastating realities and a long way to go.

At the moment, the optimism is winning out, but sure, we're not immune to the realities of limited travel, meaning less tourists. And less tourists in Hollywood really hits your bottom line pretty significantly. All of those realities are going to play out, but we're hoping they play out sooner than later, and it feels like that might be the case.”