On Wednesday, Britney Spears asked to be freed of her government mandated conservatorship. Her testimony supports the allegations of abuse #FreeBritney supporters have been saying for years. Photo by Ringo Chiu/Shutterstock

“I want to end the conservatorship ma’am,” pop star Britney Spears told a judge at her latest conservatorship hearing Wednesday in Downtown Los Angeles. It’s the first time she’s broken her silence over the 13-year long court-mandated conservatorship and made it explicitly clear she wants out.

“I’ve lied and told the whole world ‘I’m okay. And I’m happy.’ It’s a lie. I thought I just maybe [have] said that enough. Because I’ve been in denial. I’ve been in shock. I am traumatized. You know, fake it till you make it. But now I’m telling you the truth. Okay? I’m not happy. I can’t sleep. I’m so angry. It’s insane. And I’m depressed. I cry every day,” she said.

In a 20 minute statement, she called the legal action abusive and stated she’s been trapped in oppressive conditions. She says she works at the beck and call of restraining figures, including her father Jamie Spears.

“The control he had over someone as powerful as me — he loved the control to hurt his own daughter 100,000%. He loved it,” Spears told Judge Brenda Penny during her testimony.

Spears’ conservatorship is one of the most famous in recent history. It followed a fateful year in the star’s life — one painted by an all-too-public mental breakdown, divorce and custody battle that dominated headlines.

Her conservatorship status did not, however, preclude Spears from actively working. In the years since, the celebrity has recorded and released new music, as well as gone on tour and performed.

And it was that ability to perform and record music that sounded the alarms throughout the legion of Britney Spears fans around the world. In the last decade, organizations like Free Britney have formed with all advocating for one simple thing: ending the conservatorship of Britney Jean Spears and setting her free.

KCRW talked with fans of the global popstar about this moment in pop history: the moment Britney spoke up.

“It's emotional, more than anything, to hear her speak her truth. That's what we've been fighting for,” says Leanne Simmons. She’s an organizer with Free Britney L.A., and she’s been advocating for Spear’s release for nearly two years. On Wednesday, she joined fans at Grand Park in Downtown LA to rally in support of Spears.

“The public needs to know what she's been through. And we've been like a broken record as a movement, trying to explain it. But we weren't taken seriously. And Britney behind the scenes was also being silenced.”

Throughout the testimony, Simmons says that as validating it was to hear supporters were right about Spears’ mistreatment, it didn’t feel good.

“I was waiting for a single bombshell. And then it was 20 plus minutes of her asserting herself and being the strong woman we knew and loved and the woman she still is,” Simmons says. “Rumors of these things have been circulating in the fan base for many years. We knew this is what was happening and it's infuriating. It angers me, it upsets me. And what do you do when you're angry? You got to fight for change, because if you don't change it you're going to continue to live in this situation.”

She adds, “I want Brittany to get her vindication. Once I latch on to something, I'm in this until she's a free woman.” 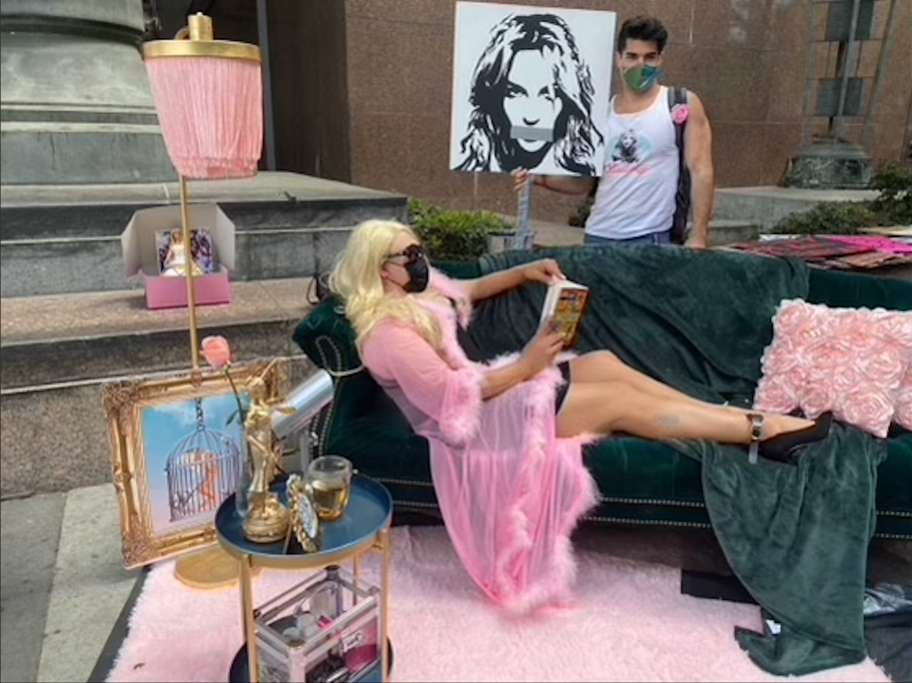 Even though long-time Spears fan Anthony Broccoli couldn’t attend Wednesday’s #FreeBritney rally in Downtown LA in person, he was following every livestream of the hearing he could. He says it was refreshing to see that at the center of her testimony, it wasn't Britney Spears the performer, but Britney Spears the woman.

“I just really want people to know that there's a human being behind the name Britney Spears, and that person is suffering and having a hard time right now,” Broccoli tells KCRW. “And that person has been beaten down and battered and stripped of her human rights.”

Like Simmons, he wasn’t surprised by the revelations that came to light. However, he was shocked to hear the pop star was forced to use an IUD.

“We all knew that she was on some form of birth control, but it's just so wrong to tell a human being what to do with their body. And how they can have a relationship with their partner. It's disgusting,” Broccoli says. “It was a big holy shit moment. And once she said that it was the nail in the coffin that we got to do right by this girl moving forward. We have to do the right thing for her. She's amazing.”

Moving forward, Free Britney LA's Kevin Wu says Spears’ case has become a lightning rod for future advocacy work focusing specifically on conservatorship abuse. He notes that the scale of unilateral control under the court mandated arrangements are an example of a corrupt legal system in California.

“Free Brittany is a human rights issue. It's a civil rights issue. And for that reason alone, everyone should be interested in this because anyone can be affected by conservatorship abuse. I think this flew under the radar for too long,” Wu says. “Conservatorship abuse affects mostly elderly and disabled people. And then even when it's affecting a female pop star [it] was also very easily dismissed by arch swaths of society. So, I hope people realize that this is a serious issue that should be taken seriously.”