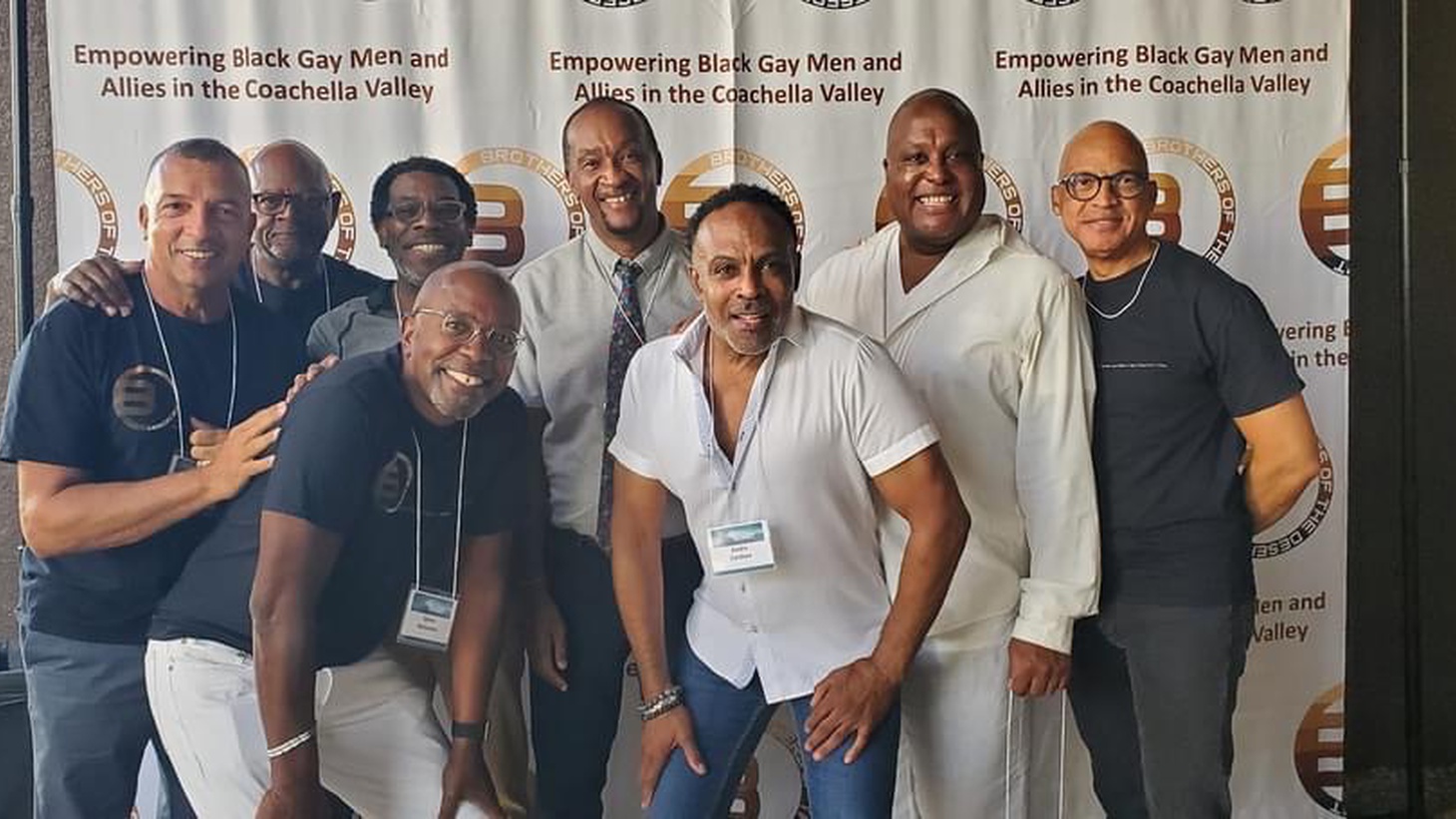 Some call Palm Springs the “gayest town in America,” but many LGBTQ residents of color say there is still a long way to go to uplift diverse communities and remedy the city’s racist past. A growing group called Brothers of the Desert is working to address that issue by empowering Black gay men in Palm Springs and beyond the city’s borders in the Coachella Valley.

“People felt isolated, people felt disconnected, and people did not feel really a part of the larger community as Black gay men in the Coachella Valley,” says Tim Vincent, president and co-founder of Brothers of the Desert.

Vincent, his now-husband Michael Taylor and their friends didn’t first set out to create a group focused on empowerment, advocacy, education, mentorship and social networking.

Both Vincent and Taylor moved to Palm Springs from places with larger Black gay communities — Oakland and Los Angeles. They often found themselves being the only Black people in the room — something Vincent says was a lonely experience.

“There’s a lot of LGBTQ presence, but not LGBTQ people of color, so it was important for us to just connect and support each other,” Vincent explains. 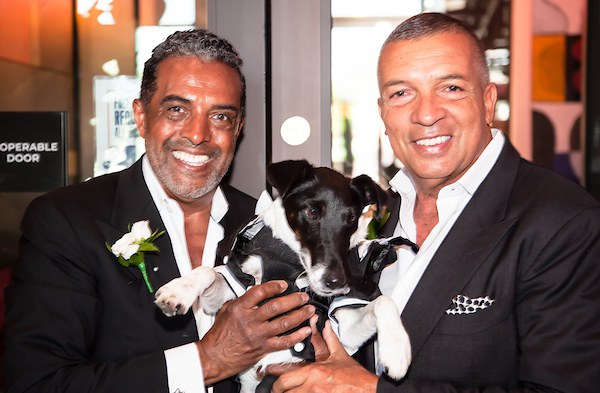 Two of the co-founders of Brothers of the Desert, Tim Vincent and Michael Taylor, appear at their wedding in April 2022. Courtesy of Tim Vincent.

Palm Springs has been known as a gay mecca for decades, even electing the nation’s first all LGBTQ City Council in 2017 and voting in the first openly transgender mayor in California history. However, the city, whose population is 79.4% white, is seen as lacking widespread racial diversity.

Vincent says when he and other Black gay men would meet up, they realized suporting one another on an individual level wouldn’t be enough.

“Even in the hangout, there was just a way that we were seen as doing something kind of different,” Vincent explains. “We would be in a restaurant — maybe 12 of us — and people would be asking, ‘Is there a conference in town?’ It was like, ‘No, we live here, this is our community, too.’” 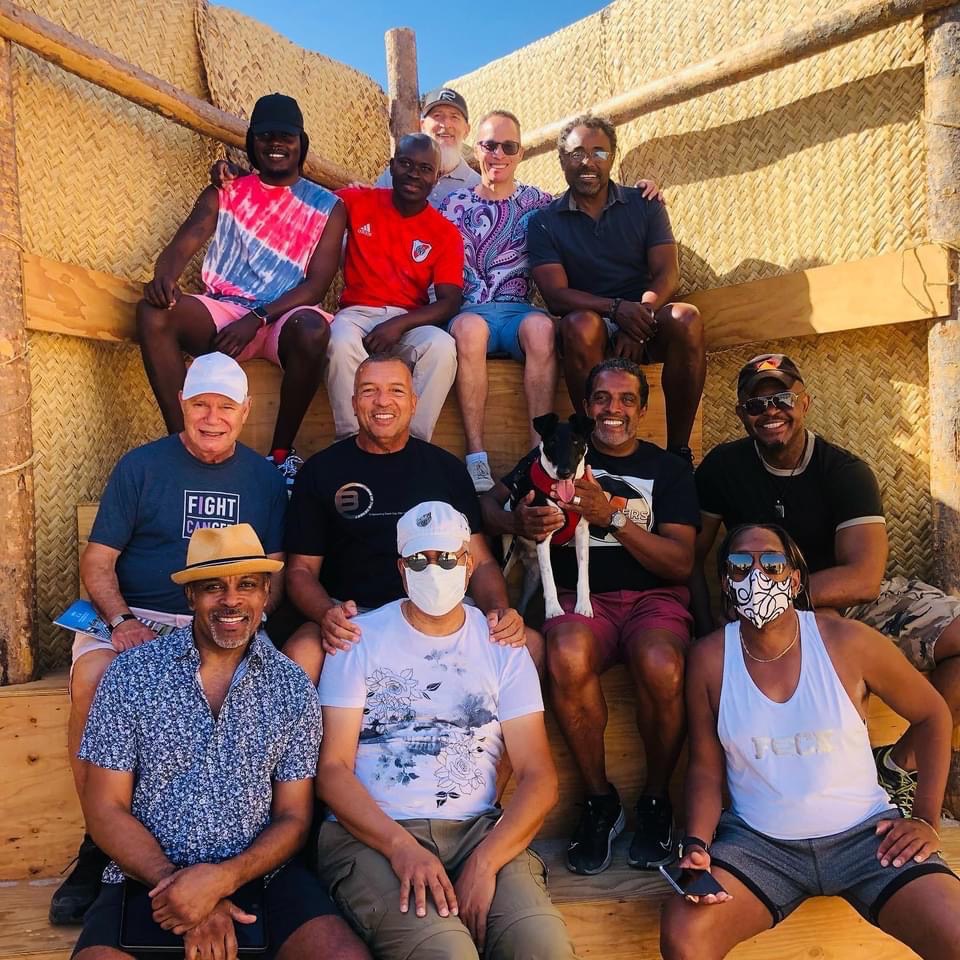 The founders formed the group in 2017, hosting events and programs that follow their mission of empowering Black gay men and their allies, eventually becoming a 501 (c) (3) nonprofit organization in 2020.

“Living your best Black gay life” is one of the group’s mottos, and it guided its first large-scale community event: a wellness summit.

The now annual occurance set out to address what many in the Brothers of the Desert group felt was representative of living their best Black gay life, including sexual and intimate relationships, nutrition, finance and more.

A post shared by Brothers of the Desert (@brothersofthedesert)

Brother of the Desert members meet at a local restaurant after their monthly meeting.

What surprised Vincent after creating the group was that in the beginning, some members of the larger LGBTQ community didn’t understand why there was a need to have an organization that is exclusively run by Black gay men.

“I think things have changed with the culture somewhat, but at the beginning, people were really … feeling that we were isolating ourselves in some ways.”

His idea of Palm Springs has also changed immensely since Brothers of the Desert was created. When Vincent moved there, he thought it was going to be less complicated, but he ended up learning much about the city’s dark, racist history.

In the 20th century, Black and Brown residents were forced out of their homes in the booming downtown area so the city could develop it — something the Palm Springs City Council is hoping to rectify now.

Another notorious example of racism against the city’s Black residents is the 50-foot-tall wall of trees that was planted alongside the Tahquitz Creek Golf Course to separate affluent white golfers from the nearby historically Black neighborhood.

Vincent says knowledge of that history has helped inspire him even more in Brothers of the Desert.

“I feel like I’m a different person here. I feel like I’ve been able to really help advocate for our community and for other communities.”